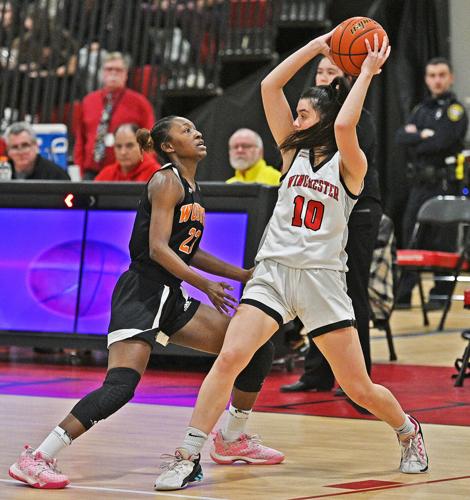 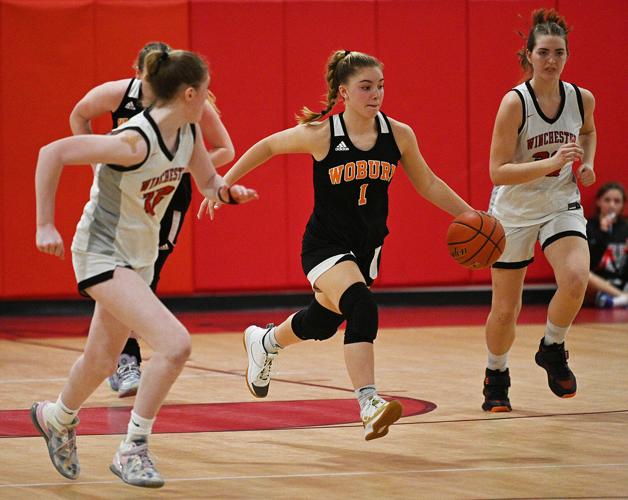 Woburn's Mckenna Morrison leads the fast break with Winchester’s Brooke Schrule (left) and Claire English (right) in pursuit. Morrison had 22 points to score half her team’s points in Woburn’s 44-38 win over Winchester on Friday.

Woburn's Mckenna Morrison leads the fast break with Winchester’s Brooke Schrule (left) and Claire English (right) in pursuit. Morrison had 22 points to score half her team’s points in Woburn’s 44-38 win over Winchester on Friday.

Overall, both teams struggled with their shooting. That is, except for Woburn sophomore Mckenna Morrison who went off for 17 points in the first half, and 22 for the game, half her team’s points, to pace the Tanners.

"Two really good teams," said Woburn coach Steve Sullivan. "Winchester is an extremely good team, extremely well-coached, Collins is a tremendous player, and Claire down low is a really good player inside. It was just two teams grinding. I think we made just enough plays in the defensive end to give us enough opportunities to win the game."

"I think they rose to the challenge, only losing by six," said Winchester coach Sam Mosley, on how the Red & Black did in their first real challenge of the season. "If we can clean up some of our mistakes, and make some free throws, the next game is going to be a nail-biter, justlike this one."

Woburn moved out to an initial 8-0 lead, due in part to two pairs of missed free throws from Winchester. Qualey had a free throw, Labissiere had a short jumper, Morrison scored her first two points and Amber Hayden sank a 3-pointer to account for the eight points.

The Red & Black quickly got back into it with back-to-back threes from Collins and Kelcourse. After a 3-pointer from Morrison, Kelcourse sank another three and Woburn was now leading, 11-9.

The momentum stayed with Winchester in the early part of the second quarter, as it took five-point leads as Tatum Kenrich took a handoff from Kelcourse and sank a 3-pointer, and Kenrich dished to Kelcourse for another basket and a 20-15 lead.

That's when Morriison asserted herself for the Tanners, knocking down back-to-back threes to put Woburn ahead, 21-20. It was the start of a 9-1 run to end the second, which left the Tanners ahead at the half, 24-21.

"We got some really good looks, missed some very make-able shots," said Sullivan. "But what I'm encouraged by is that we got them. Now we have to keep working at it, and keep getting better at it, and make those shots."

"We wanted to slow down Woburn a little bit, they are very fast and a very smart team," said Mosley. "They move the ball well in transition. We want to get their second chance points down. We've got to do a better job next time."

Shannon McCarthy had two baskets at the start of the third to increase the lead to 28-21, and gave the impression the Tanners were starting to take over.

Labissiere scored the next six points, including a three-point play, one-of-two free throws and a fast break layup off a pass from Morrison.

"I think it's games like this that separates teams," said Sullivan. "Good teams need to face this (strong competition). You can't beat every team big. They (Red & Black) are a real good team, undefeated going into tonight, I think we did a nice job at the end, playing smart, too. We got some offensive rebounds, used some clock and scored just enough points to win the game."

"The plan that we had we executed," said Mosley. "We just have to knock down more shots, obviously."

For the second game in a row, the Woburn High girls' basketball team found itself getting challenged by a Middlesex League rival. Wilmington actually led after one quarter, and only trailed by two points at the half.

The Tanners, however, found their best game in the third quarter, scoring 28 points to help them pull away to a 62-41 victory, Monday at Torrice Gym.