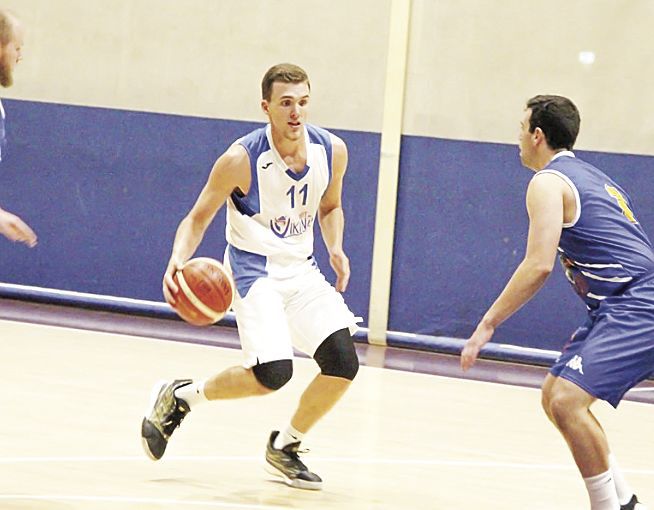 MICHAEL GRASSEY played this past season in Ireland while earning his master’s degree in business. The Winchester two-sport great found the experience was actually better than the basketball. 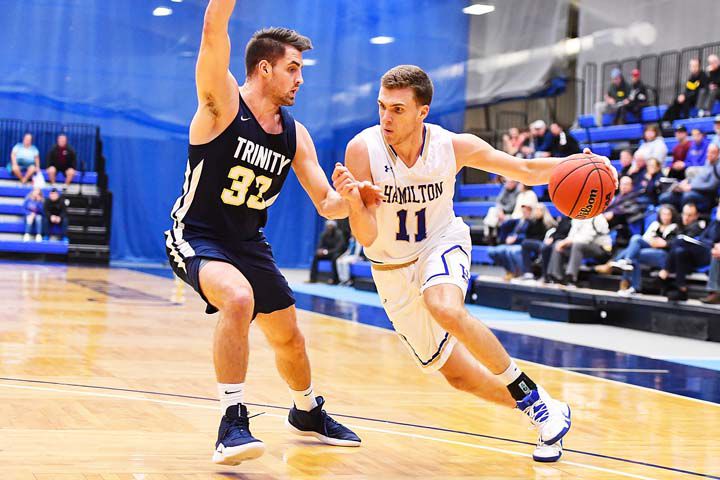 AT HAMILTON COLLEGE MICHAEL GRASSEY (11) was a three-year starter who scored over 1000 career points (1204). The Winchester native helped his team to a successful three-year run that saw it win 76 games and make two NCAA Division 3 tournaments.

MICHAEL GRASSEY played this past season in Ireland while earning his master’s degree in business. The Winchester two-sport great found the experience was actually better than the basketball.

AT HAMILTON COLLEGE MICHAEL GRASSEY (11) was a three-year starter who scored over 1000 career points (1204). The Winchester native helped his team to a successful three-year run that saw it win 76 games and make two NCAA Division 3 tournaments.

Grassey (6-4) was a three-year starter and a prolific outside shooter for the Continentals. He ended up third on the team's all-time list with 186 3-point field goals after completing his senior season in 2018-19.

Just like he was at Winchester High, he was also a 1000-point career scorer in college with 1,204 points for Hamilton. He also pulled down 654 rebounds in his college career.

Everything was going great at Hamilton during his senior year until the season ended with a couple of heartbreaking, home court losses to Amherst (for the conference championship) and to Christopher Newport (VA) in the Sweet 16 of the national tournament, the second year in a row it fell in that round.

The experience left a bitter taste in the mouth of the graduating senior, who did not want his competitive basketball career to end on that note.

“There’s no way I wanted that to be my last experience in the sport I love,” said Grassey.

The former Sachem found the perfect opportunity to extend his hoops career, while also getting a master’s degree, as a Victory Scholar as part of the Sports Changes Life program.

Grassey would travel to play basketball in Ireland with the Waterford Institute of Technology. The program allowed him to play another year of basketball while getting a Master’s in Business degree, while also giving him the opportunity to immerse himself in Irish culture while living in Waterford.

“It was the ideal way to get my master’s degree, play basketball and become part of the community while coaching youth players,” said Grassey. “As for the basketball, I found the American culture of basketball is a lot different in Ireland, they don’t take basketball as seriously.”

Grassey did a blog on his entire experience, and shared early on his first experience with injuries while playing basketball, including a twisted ankle and a concussion.

“The Americans were good players and some of the European exchange players were good, but otherwise the basketball was at a low Div. 3 level,” he said. “We would only have one game a week and only practice two times a week, where we would practice five or six times a week at Hamilton.”

Once Grassey recovered from the injuries, he flourished in the long season, which started in late September and ended with one game left on the schedule in early March when the COVID-19 virus began to overtake Europe.

The basketball turned out to be less important than the experience itself, which allowed him to go all over Ireland for road games, and allowed him to immerse himself in the Irish culture.

Waterford IT was not going to make the postseason so the final game was cancelled. Grassey wanted to stay in Ireland but decided to return home before travel bans were put in place.

“I was going to stick it out but it got so bad,” he said. “I decided to get out before they instituted travel bans, but it was a great experience overall.”

It was the people, the culture, the scenery and his involvement in coaching the young players that made it difficult to want to leave.

“The Waterford community took me in and made me feel right at home,” said Grassey. “That was the best part of the experience. I wanted to give back to them for what they had given me.”

The experience also gave him some insights to how people approach life in Ireland, as opposed to the United States.

“It was great to live in a different country with different people; it was an eye-opening experience,” said Grassey. “In Ireland, it’s much more about family and sustainability, while here it’s much more competitive and who can do better than the next person. I really like the Irish approach to life.”

As for as playing competitive, Grassey is finally ready to move on and continue with the rest of his life.

“It was great basketball but I think my career has run its course,” he said. “It was a good way to flush it out of my system.”

Grassey brought home a master’s in Business degree and is looking to begin a career in sales once the job market recovers from the pandemic.