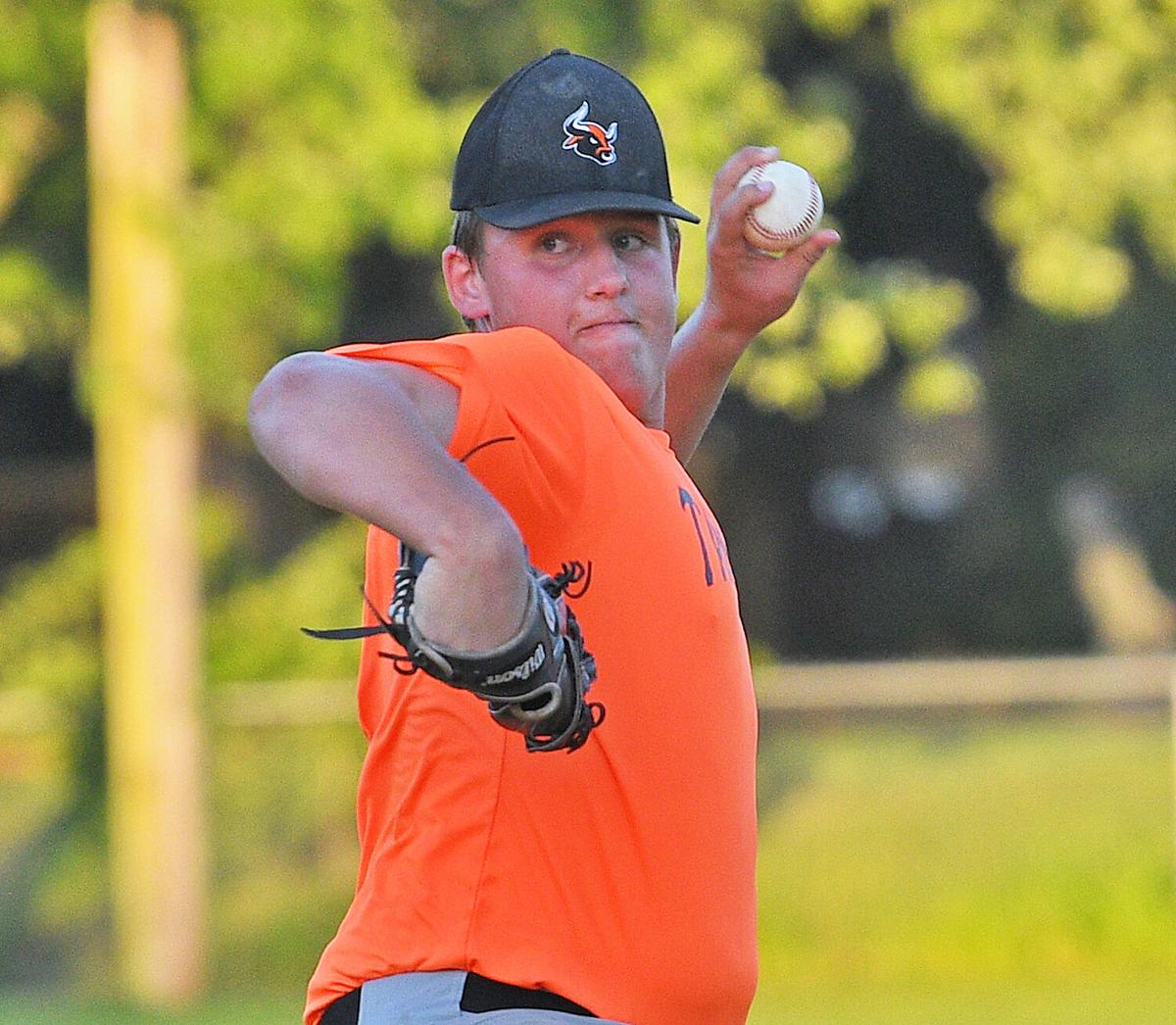 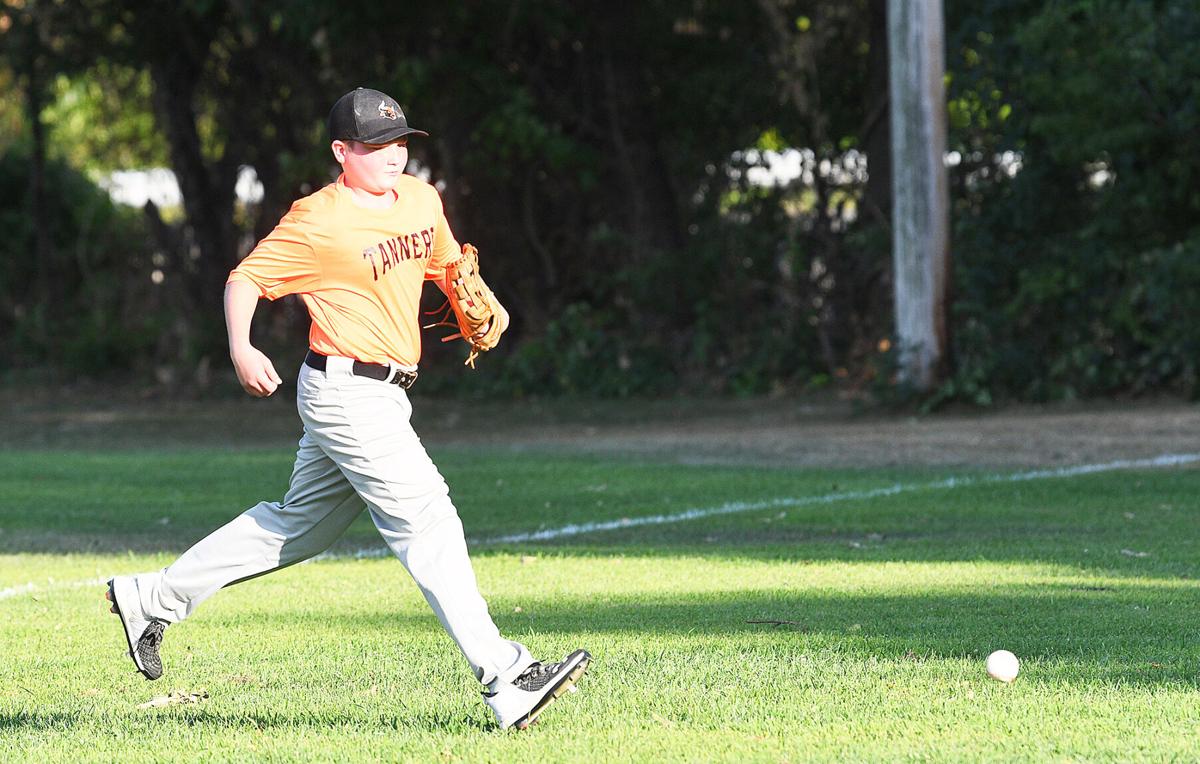 Woburn right fielder Dylan Sigsbury chases a foul ball during the game against Brookline. Sigsbury was one of the many good hitters the U-15 team could send out to punish opponents en route the the LTA B Division title.

Woburn right fielder Dylan Sigsbury chases a foul ball during the game against Brookline. Sigsbury was one of the many good hitters the U-15 team could send out to punish opponents en route the the LTA B Division title.

BOSTON — Memorial Park in East Boston was like another world, weather-wise, with occasional rain falling and cool breezes whipping in off Boston Harbor, making for fall-like conditions, but it could not keep Woburn’s U-15 baseball team from remaining red hot in their quest for a Lou Tompkins All-Stars trophy.

After holding off a game Stoneham team, 5-3, Saturday night, the Tanners returned Sunday afternoon (Aug. 16) to whip Wilmington, 9-4, to capture the championship.

Woburn got strong pitching in each game, and the Tanners also amassed double-digit hits in each contest.

Yesterday, it was Jackson Powers who kept the Wilmington bats in check while he and his teammates built an 8-0 lead in the first five innings. When the Wildcats began to find a rhythm at the plate in the fifth, Connor Welch came on to work his way out of trouble and then close the game out with two shutout innings.

“We have great kids, and we are a tough team to beat, especially when the 15-year-olds can pitch with us,” said Woburn coach Duane Sigsbury. “Jackson and Connor were just lights out against Wilmington, a good-hitting team.”

For the first time in the tournament, the Tanners were the visiting team. After a scoreless first, Woburn took a 1-0 lead in the top of the second when Derek Santullo delivered a two-out single off Wildcats’ starter Burke Zimmer to to plate Trey Dowd, who had led off with another single.

The Tanners put together a two-out rally in the top of the third to open up a little breathing room.

Ryan Lush kept the inning alive with a single. He stole second and scored on a single to right-center by Welch. Danny DeFeo followed with a double and Woburn was now up, 3-0.

Wilmington loaded the bases in the bottom of the third, but Powers got Jacob Roque to hit a pop up not far from home plate, and catcher DeFeo snared it to end the threat.

The Tanners broke the game open with five runs in the top of the fifth, batting around in the process, to take an 8-0 lead.

With one out, and Matt Ardito on in relief for the Wildcats, Powers singled, Lush walked and Welch sent a line drive over the left fielder’s head for a two-run triple. The third base coach gave Welch the green light to try for a home run, and he was thrown out at the plate.

A walk and an error put runners on second and third, and Luke Gangi walked to load the bases. A single by Jordan Henriques scored DeFeo, an error scored Trey Dowd and another single, this one by Sean Venezia, scored Gangi.

“When you get out to the lead, you get confidence and feel better about yourself,” said Sigsbury. “Wilmington is a great team and they fought back.”

In fact, the Wildcats were able to cut the deficit in half with four runs in the bottom of the fifth. Welch relieved Powers with the no outs, the bases loaded, and one run already in. It took a couple batters to find his groove, but Woburn still had a four-run lead when the inning was over, and that was more than enough to make the Tanners champions.

“I’m just proud of the guys, and happy we can bring the championship back to Woburn,” said Sigsbury.

In addition to being champions, the older players are highly likely to be making an impact on the Woburn High baseball program.

“We had a tremendous group of athletes, a combination of the 14-year-olds and the 15-year-olds,” said Sigsbury. “The 15-year-olds will all be on the varsity baseball team, next year, I would guess. The younger kids will move up and be the 15-year-olds while the (even) younger kids move up to take their spots. We have a good little thing going on here in Woburn as far as summer baseball. Coach (Joe) Wells should be excited, he has a wagon coming.”

Woburn 5, Stoneham 3 — The Tanners got to the final with a hard-fought victory over the Spartans, Saturday night at Memorial Park. The start of the game was pushed back 90 minutes to 7 p.m. after the Reading-Brookline A Division semifinal went 12 innings.

When play got underway, Stoneham took a 1-0 lead in the top of the first against Woburn starter Danny DeFeo. Danny Storella (3-for-4, 3 runs, 3 stolen bases) led off with a single, stole second and scored on a single by Carter McFadden.

The Tanners tied the game in the bottom of the first against Spartan starter Cam Rager (pronounced Ray-gur). Jackson Powers reached second, leading off, on an infield throwing error. he went to third on Ryan Lush’s infield single, and scored on a single by Connor Welch (3-for-4, run, 2 RBI). Rager got the next three batters to escaper further damage.

Woburn took its first lead in the bottom of the second. With two outs, Sean Venezia reached on a dropped fly ball, stole second and scored on a single by Powers (2-for-3, 2 runs).

Stoneham tied the game back up at 2-2 in the top of the third inning. With one out, Storella singled, went to second on a balk, stole third and scored on a two-out single by John Daly. Matthew Donovan, who had walked after the Storella single, was thrown out at home after trying to score behind Storella on the Daly single.

The Tanners scored a single run once again in the third, this time going ahead to stay. Welch, with a beautiful inside-out swing, sent a powerful line drive to left that took a hop that got by the left fielder. As the ball rolled to the fence, Welch made it to third for a triple. Rager got the next two batters by strikeout before Trey Dowd, in another nice piece of hitting, hit an opposite field line drive single to drive in the run.

A Derek Santullo single and an error put runners on second and third before Rager got out of the jam with his fifth strikeout.

Woburn opened up a three-run advantage with two more runs in the fourth inning. With one out, Powers singled and went to second on an errant pickoff throw. Lush walked and Powers scored on a single by Welch. Lush scored on a sacrifice fly by Defeo to give the Tanners their 5-2 lead.

The Spartans got one run back in the top of the fifth to stay in the game. Storella singled with two outs and Donovan was hit by a pitch. As DeFeo spun around to try and pick off Storella at second, the latter took off for third as the throw went into center field. Storella came around to score as Donovan remained at first. DeFeo walked the next two batters to load the bases before getting Daly to hit into a fielder’s choice.

Stoneham got good relief pitching from McFadden, while Woburn’s Jordan Henriquez pitched two strong innings in relief to pick up the save.