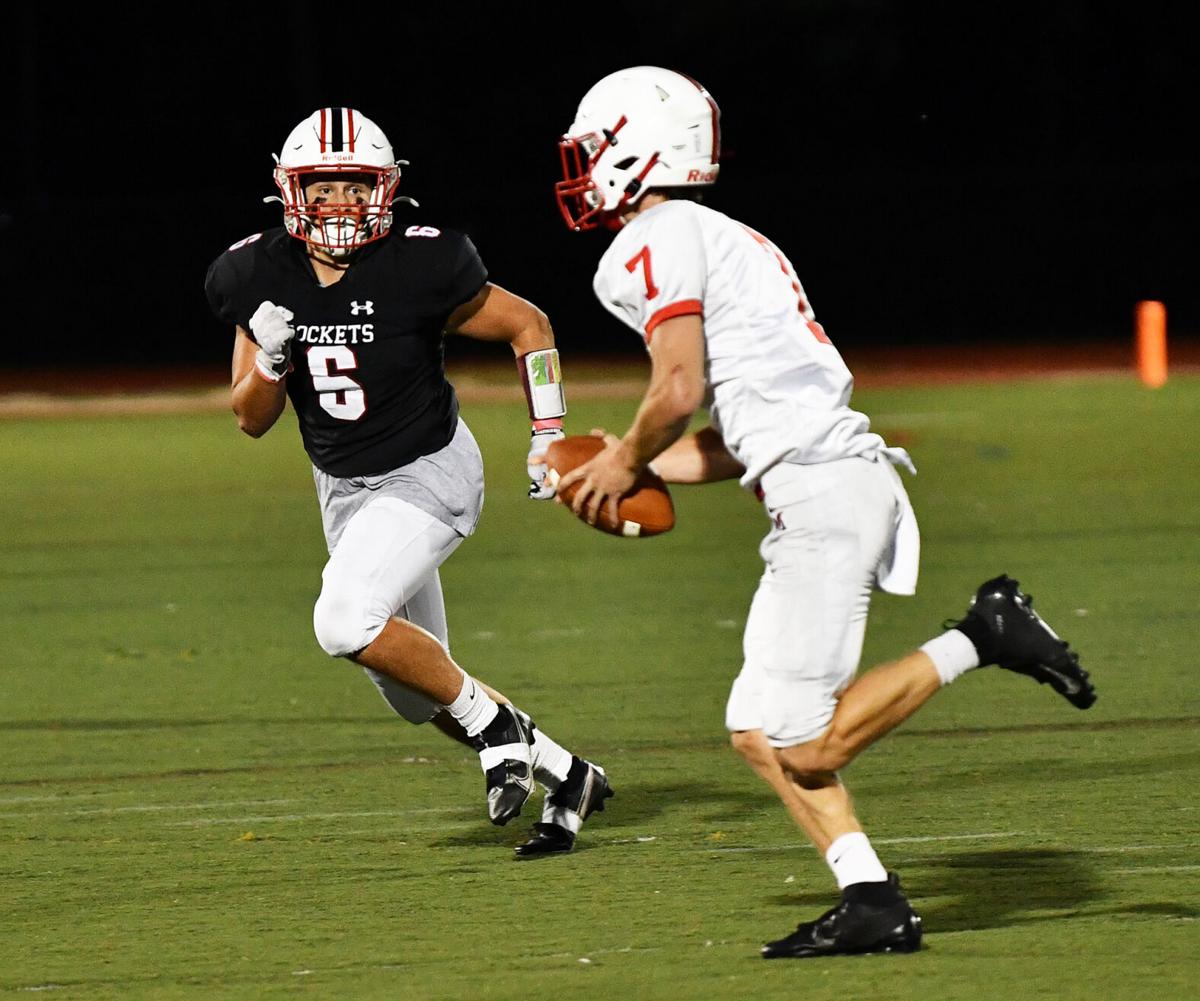 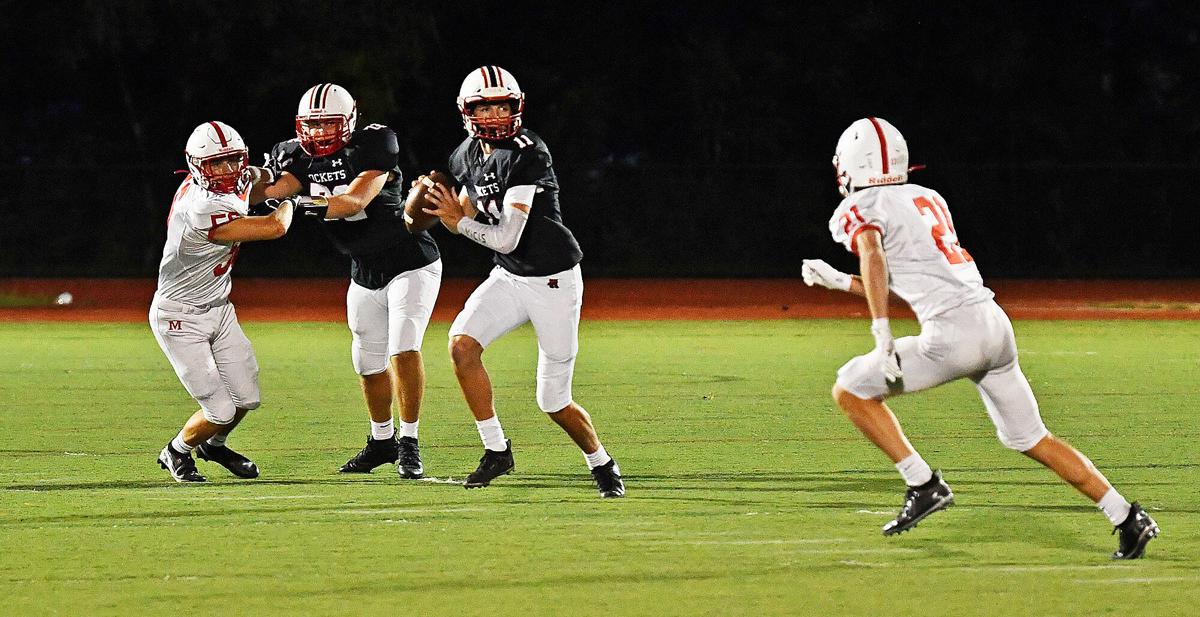 Reading's Eamon Centrella (72) blocks Melrose's Thomas Foley giving Reading QB James Murphy time to look for a receiver downfield, though he's got Melrose's Stephen Fogarty bearing down on him. Murphy was on target all night as he completed 25 of 36 passes for 316 yards and three touchdowns. 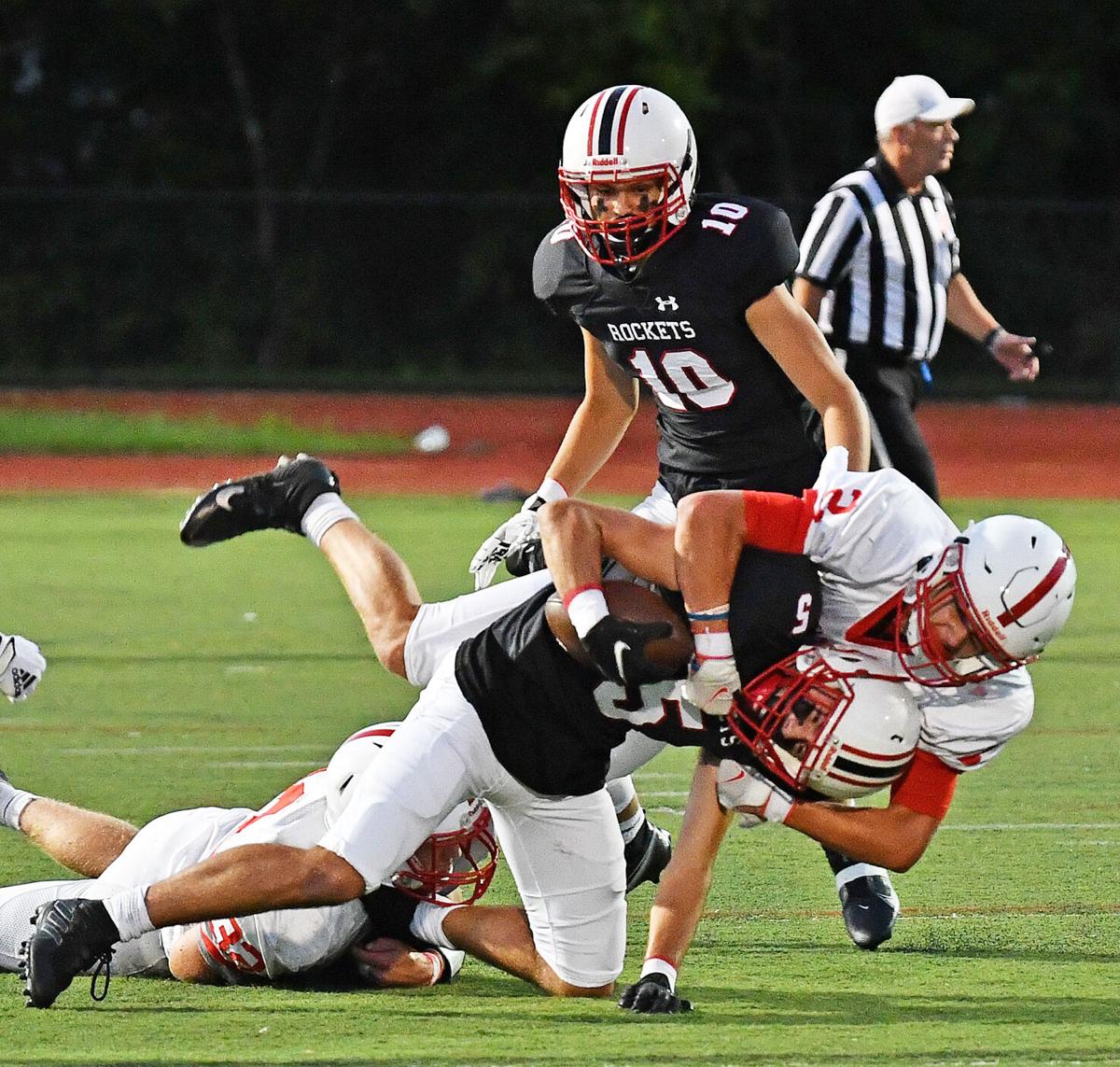 Reading's Eamon Centrella (72) blocks Melrose's Thomas Foley giving Reading QB James Murphy time to look for a receiver downfield, though he's got Melrose's Stephen Fogarty bearing down on him. Murphy was on target all night as he completed 25 of 36 passes for 316 yards and three touchdowns.

READING — In the first quarter, it was shaping up to be the kind of game that would come down to which team had the ball last.

In the middle of the game, however, the Reading High football team took the game in a different direction, scoring 27 straight points to defeat Melrose, 40-21, in the season opener for both teams on Friday at Hollingsworth Field.

The game was the first between the two schools since 2012. In the Fall II season, each team won its division in the Middlesex League, with Reading winning the Liberty and Melrose, the Freedom. They were also winners of their divisions in 2019. Melrose won the MIAA Division 4 state title that season, while Reading reached the Division 2 North semifinals. Melrose also had a 21-game winning streak before Friday.

The score was tied at 7 at the end of the first quarter, with each team scoring once and getting stopped inside the 25 once. With 3:06 left in the second quarter, Reading regained the lead on Goodchild’s first touchdown, which he scored on fourth and goal from the 1-yard line, going through the left side of the line. His second of four successful kicks made it 14-7.

With nine seconds left in the half, the Rockets added another touchdown on quarterback James Murphy’s second of three touchdown passes., a 6-yarder to Goodchild near the left sideline. The extra point put the Rockets up, 21-7 at the half.

“We knew what we were doing wrong and we fixed it,” Goodchild said. “We played more physical.”

On that series, Murphy (25 for 36, 316 yards) completed four passes, including a 33-yard pass to Jesse Doherty on the play preceding the touchdown. On the first two plays, he connected with Ryan Strout (10 catches, 128 yards) for gains of 17 and 22.

“The offensive line gave him time to throw,” said Reading coach John Fiore. ‘Colby Goodchild also quietly did some good blocking in pass protection. Melrose was bringing a lot of pressure so they did a good job.”

On its first two possessions of the second half, Reading added two more touchdowns. On the opening series of the third quarter, the Rockets drove from their 35 on 13 plays, finishing with Goodchild scoring on a 4-yard plunge with 7:28 left in the quarter.

After Reading’s defense stopped the Raiders at midfield on the next series, the Rockets added another touchdown. They started the series at their own 11 after an illegal block in the back call on a punt return. The drive ended on the first play of the fourth quarter, a 13-yard touchdown pass from Murphy to Alex DiNapoli. It was DiNapoli’s second touchdown of the evening.

Melrose responded on the next series with quarterback Trevor Botto completing a 7-yard pass to Liam Maher for the Raiders’ first score since the opening quarter.

Alvin Day capped off the scoring for the Rockets on the next series with a 1-yard plunge. With 3:01 remaining. Day carried the ball on eight of the nine plays in the series, gaining 66 yards.

Botto scored his second rushing touchdown with 1:31 left to play on a 31-yard run. His first touchdown, on which he broke through the middle of the line form midfield, tied the game at 7 with 2:54 left in the first quarter.

On the opening series of the game, Melrose made it to the Reading 21 before Botto’s fourth-and-6 pass to Brady Pitcher fell incomplete.

After Reading took over, Murphy threw his first touchdown pass, a 17-yard completion to DiNapoli, with 4:53 left in the first quarter.

“We started out pretty well,” said Melrose coach Tim Morris. “We had some good drives. If we hit that seem route, it might have helped. We have to play better defense, especially in the secondary.”

Early in the second quarter, Reading threatened to regain the lead, but the threat ended at the Melrose 5, when Shea Fogarty recovered a fumble.

Up next for Reading is Barnstable on Friday at home, while the Raiders will face defending Dual County League Large champion Lincoln-Sudbury, a team that defeated Reading in the final game of the Fall II season.