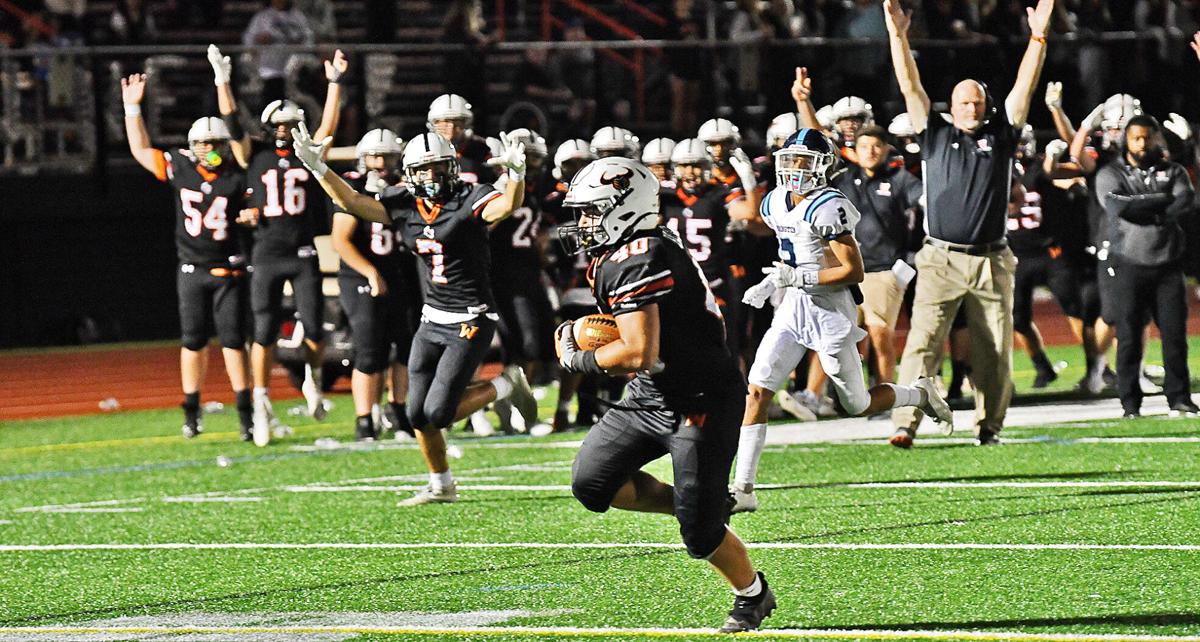 WOBURN’S DEREK BACCARI heads for the end zone for the game-clinching score with under a minute to play behind the support of the Woburn bench. The Tanners got their season off to a successful start with a 27-19 win over Wilmington at Woburn High. Woburn will host Burlington this week. 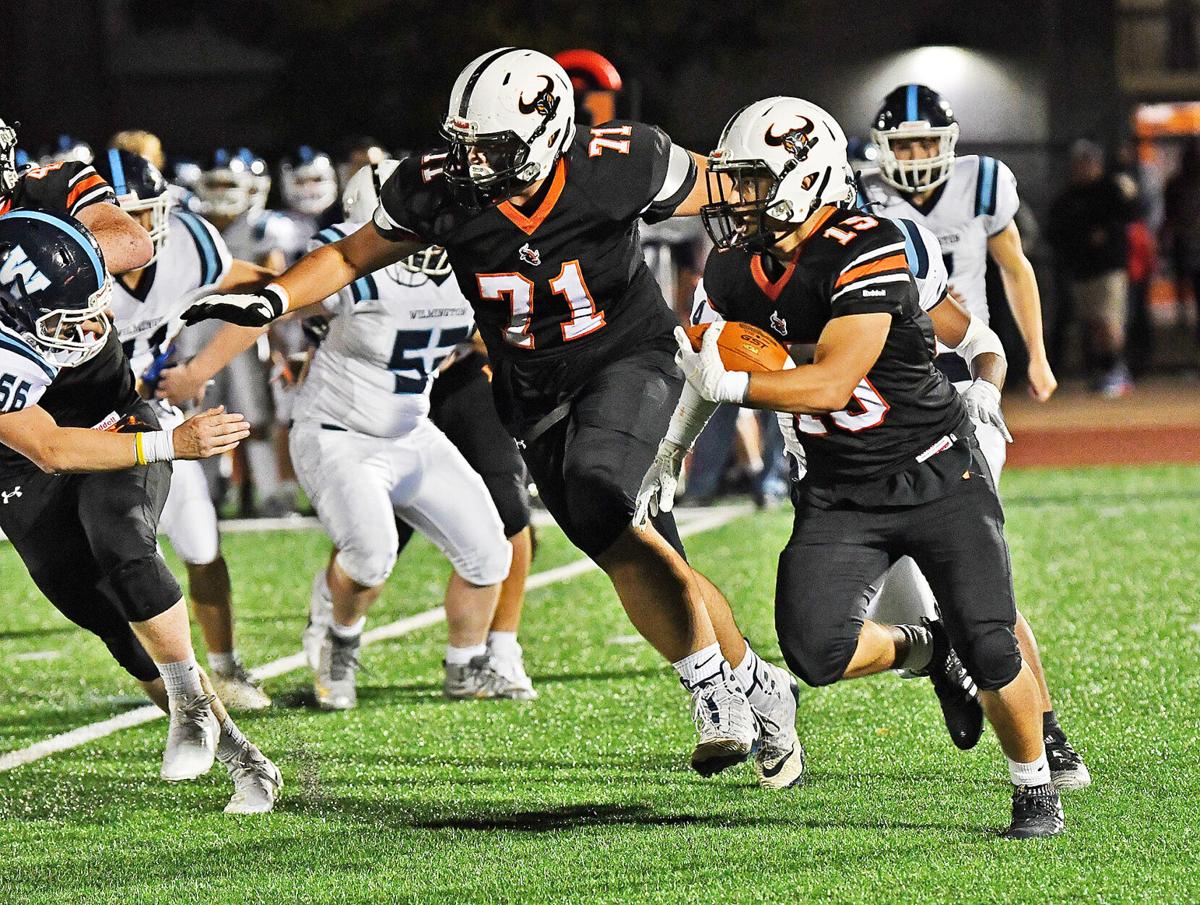 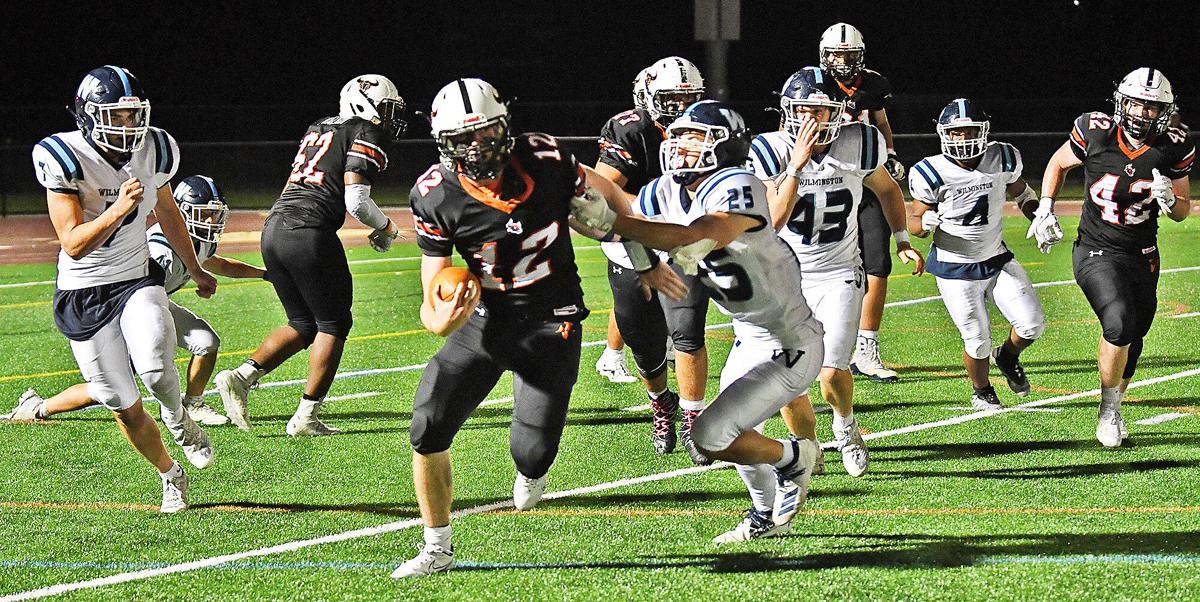 Woburn QB Brett Tuzzolo tries to get away from Wilmington's Marcello Misuraca during action from last Friday's season opener. The Tanners held off the Wildcats, 27-19.

WOBURN’S DEREK BACCARI heads for the end zone for the game-clinching score with under a minute to play behind the support of the Woburn bench. The Tanners got their season off to a successful start with a 27-19 win over Wilmington at Woburn High. Woburn will host Burlington this week.

Woburn QB Brett Tuzzolo tries to get away from Wilmington's Marcello Misuraca during action from last Friday's season opener. The Tanners held off the Wildcats, 27-19.

WOBURN — While it may not have been a perfect performance, the Woburn High football team overcame some emotional and physical issues, didn’t complete a pass, and weathered a storm in the late going to still came away with an opening-game win to get its season off on the right track.

The Tanners used a strong running game to take a first-half 21-point lead, before nearly losing its entire edge due to penalties and cramping issues. But Woburn fought back a comeback bid and tacked on a late score, to emerge with a 27-19 victory over Wilmington, in its season opener at Woburn High on Friday night.

The main offensive weapon for the Tanners was sophomore running back Brian Ferreira, who had 127 rushing yards and two touchdown jaunts just in the first half, and finished with a game-high 176 rushing yards on 13 carries. Ferreira also had some help from his offensive line which opened up the holes to run through.

“Brian (Ferreira) did a great job on those runs, but I also give credit to the whole offensive line which did their job and played great,” said Woburn coach Jack Belcher. “Those double-wing plays involved all 11 kids on the field, so it was not just Brian but the other 10 kids doing their thing that made those plays happen.”

The Wildcats appeared down and out for most of the first half before penalties and cramping issues for Woburn helped Wilmington surge back to within two points in the fourth quarter. Running back Gavin Erickson rushed for 97 yards on 11 carries, while quarterback Pedro Germano completed five of 17 passes.

The Wildcats received the opening kickoff and behind runs of at least 13 yards by Mike Lawler, Marcello Misuraca, and Erickson quickly drove in four plays from its own 27 to the Woburn 11-yard line. But after three plays lost four yards, John Germano missed a 32-yard field goal attempt to keep the game scoreless.

From its own 20-yard line it took the Tanners just two plays to convert its first possession into points. After a six-yard run by Baccari, Ferreira took his first carry of the season right through a hole off right tackle, and rambled 74 yards down the right sideline to the end zone for the score, and give Woburn a quick 6-0 lead.

Then after the Tanners forced a Wilmington punt to get the ball back on the Wildcats 41, it took Woburn just three plays to score again. After two short runs, Ferreira took his second carry of the season off left tackle, and all the way to paydirt for another score. Marc Cutone’s extra-point kick made it a 13-0 lead.

The Tanners defense then forced a three-and-out, to give Woburn the ball back at its own 33 early in the second quarter. This time it took six plays, highlighted by a 20-yard run by Baccari, and capped by a five-yard run by Tuzzolo, for Woburn to score again. A two-point conversion rush by Baccari gave Woburn a 21-0 lead.

But just when the Tanners appeared ready to completely blow the game wide open, some of Woburn’s players started to get cramps, including Ferreira who missed the rest of the first half. Along with some of Woburn’s defensive players forced to the sideline, Wilmington took advantage to finally get on the board.

Starting its next possession at its own 47, the Wildcats drove 53 yards in nine plays, highlighted by a 23-yard burst by Erickson. The drive was capped by a three-yard touchdown run by Misuraca and an extra-point kick by John Germano, to cut its deficit to 21-7, which it remained through halftime.

“We just started committing penalties with a lot of emotion that we can’t have, and we had too many kids with cramps,” said Belcher. “At one point we had all three backs out with cramps, so we had to move kids around a lot for a lot of plays. So we didn’t do as good a job as we should have in the second half.”

After the teams exchanged two possessions through a scoreless third quarter, the Wildcats used a defensive stop forced a Woburn punt early in the fourth quarter. John Germano received the boot at his own 25, cut to the right sideline, and ran all the way downfield 75 yards for the score, to cut Woburn’s lead to 21-13.

To compound things a personal foul penalty by Woburn on the run allowed Wilmington to boot the ensuing kickoff from the Woburn 45. The Tanners got pinned in on its own 14-yard line and went three-and-out, and John Germano returned the ensuing punt to the Woburn 26 to give Wilmington a short field.

From there it took the Wildcats eight plays to drive the short distance to the end zone, capped by a six-yard run by Erickson, to cut Wilmington’s deficit to 21-19 with three minutes left to play.

Erickson took the carry on the ensuing two-point conversion attempt, but was stopped by Doherty just short of the goal line, to preserve Woburn’s two-point lead. This was a huge play, since it compelled Wilmington to try an onside kick on the next kickoff, which was recovered by Tuzzolo at the Woburn 49.

“We worked on recovering onside kicks, which helped us recover that, and then we went down and scored again,” said Belcher. “We could have just got a first down and just taken a knee, and then there wouldn’t have been all that craziness at the end. But the best part of it was we still won and we’re 1-0.”

From there two by Ferreira gained 13 yards and a first down, forcing Wilmington to use its remaining time-outs on the next two plays. Then only needing a first down to secure the win, Baccardi took the next carry all the way to the end zone for the score with 52 seconds left, to extend Woburn’s lead to 27-19.

The Wildcats did have one last chance, but after completing a short pass, Pedro Germano threw three straight incomplete passes which drained the remaining time off the clock, and secure the decision for the Tanners.

“Brian (Ferreira) and Derek (Baccari) are both tough kids, but it was more than just them, it was the blockers as well,” said Belcher. “Brett (Tuzzolo) did a nice job in just his second start, while our whole defense stepped up and did a great job. We got the win, but we still have a lot of things to fix which we’ll work on.”

Woburn next plays on Friday when it hosts Burlington in the annual “Battle of Winn Street” at 7 p.m.