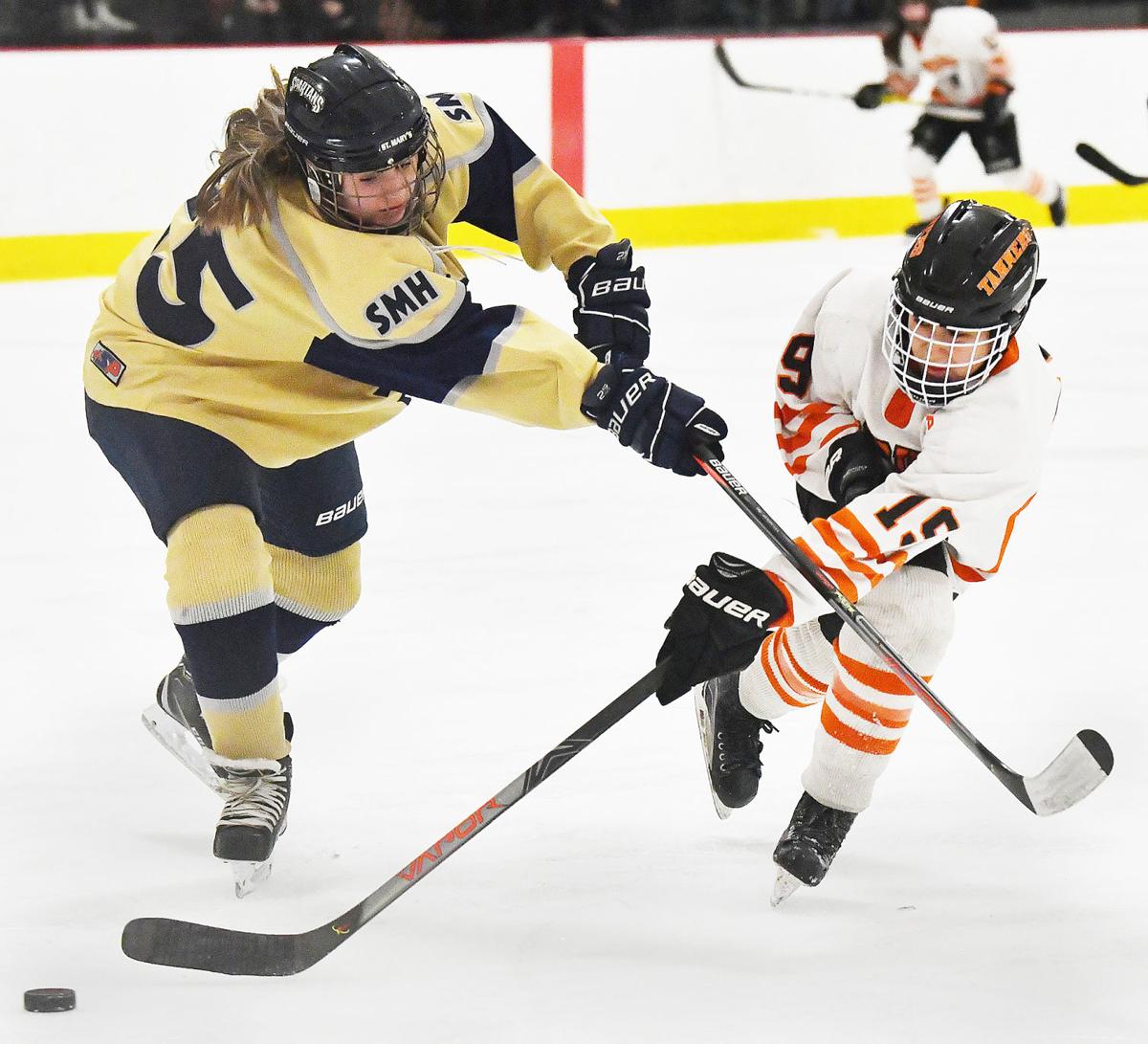 Woburn's Meaghan Keough gets off a shot despite being slashed by St Mary's Samantha Porazinski. The Tanners won, 2-1, in their Div. 1 state girls hockey quarterfinal.

Woburn's Meaghan Keough gets off a shot despite being slashed by St Mary's Samantha Porazinski. The Tanners won, 2-1, in their Div. 1 state girls hockey quarterfinal.

WOBURN — The Woburn High girls’ hockey team is one win away from its third trip to the TD Garden in three years, following a thrilling, 2-1 victory over St. Mary’s, in the MIAA Div. 1 state quarterfinals on Friday, March 6 at O’Brien Rink.

Freshman Angelina DiGirolamo’s dramatic, third period, shorthanded goal, while the Tanners were killing a five-minute major, turned out to be the difference in a highly-competitive matchup between two of the best teams in the state.

St. Mary’s tied the game on a power play goal, late in the second period, and then had a five-minute power play in the third after the Tanners took a major penalty. Woburn had killed off more than three minutes of the penalty when DiGirolamo won the puck from a defenseman at the Spartan blue line and scored the go-ahead goal on a breakaway.

St. Mary’s kept the pressure on until the last minute but were denied by the Woburn defense, and Tanners’ goalie Amanda Essigmann, who had 28 saves.

“It took everything we had and it was a hell of a battle from St. Mary’s,” said Woburn coach Steve Kennedy. “I’m really proud of how the kids played tonight. We knew going in this was going to be the toughest one and it was a hard-fought battle.”

DiGirolamo also scored the first goal of the game for the Tanners. Both goals were sights to behold. Four minutes into the game, Angelina collected a pass from twin sister, Lucia DiGirolamo, and tried to split the St. Mary’s defense. She ended up falling to the ice and was sliding towards the net when she realized she still had the puck. She was getting close to the net when she fired the puck while sprawled on the ice - and it went in, inside the right post, past a startled Spartan goalie, eighth-grader Rhyan Pitari.

“On that first goal, she was breaking away and then she goes down to the ice and I don’t know how she did it once she was on the ice,” said Kennedy, of Angelina DiGirolamo. “It comes from her heart and that’s what I really admire about her.”

Although St. Mary’s started to play a lot better in the second period, and had more possession, the Tanners were still effective in transition and had a few good chances to increase their lead in the second, but to no avail.

The Spartan power play goal was also a gem, as freshman Jenna Chaplain took the puck into the Woburn zone down the left wing. She cut towards the middle of the slot and uncoiled a wicked wrist shot that beat Essigmann over her left shoulder at 12:26

Essigmann was a steady force in goal throughout the game, stopping shots from every angle and on deflections.

“She was absolutely tremendous, tonight, in every facet,” said Kennedy, of Essigmann, who has allowed only one goal in three tournament games. “She controlled rebounds, she tied pucks up, she faced the long shots. We can’t say enough about her. We have this ugly orange helmet that gets passed around to the player of the game, and Amanda got that tonight.”

The major penalty came at 4:29 of the third when two players collided at center ice, and the St. Mary’s player fell hard into the boards. It was an accident but still earned a five minute major penalty for checking.

The Tanners took a deep breath and began killing off the penalty. The Spartans moved the puck, got off some shots, but was unable to get any of them past Essigmann. The more time came off the penalty, the more confident Woburn got with its defensive effort.

There was about 90 seconds left in the penalty when the Tanners’ Jackie Lees passed the puck to Angelina DiGirolamo at the St. Mary’s blue line. A defender tried to get to the puck and DiGirolamo went right by her, creating a breakaway. In a goal reminiscent of her penalty shot goal in the second Arlington game, DiGirolamo skated in from the inside of the left circle, and skated across in front of the net to see how Pitari would react. She kept going past the right post before she saw a slim opening and put the puck into the net for a 2-1 Woburn lead.

“Angelina is a highly-skilled individual player, and she has worked to get herself to this point,” said Kennedy. “You’re born with it to some degree, but she has worked hard to develop her skills. What separates her from so many players is her heart and her effort. Without the tenacity she shows in all three zones on the ice, she wouldn’t be able to achieve what she does.”

The Spartans continued to apply pressure over the remainder of the penalty and in the final seven minutes of action, but Essigmann and the Tanners were able to withstand it the rest of the way.

Fourth-seeded Woburn went on to play its semifinal game against eighth-seed, Boston Latin, as part of a semifinal doubleheader at O’Brien Rink on Monday, March 9.