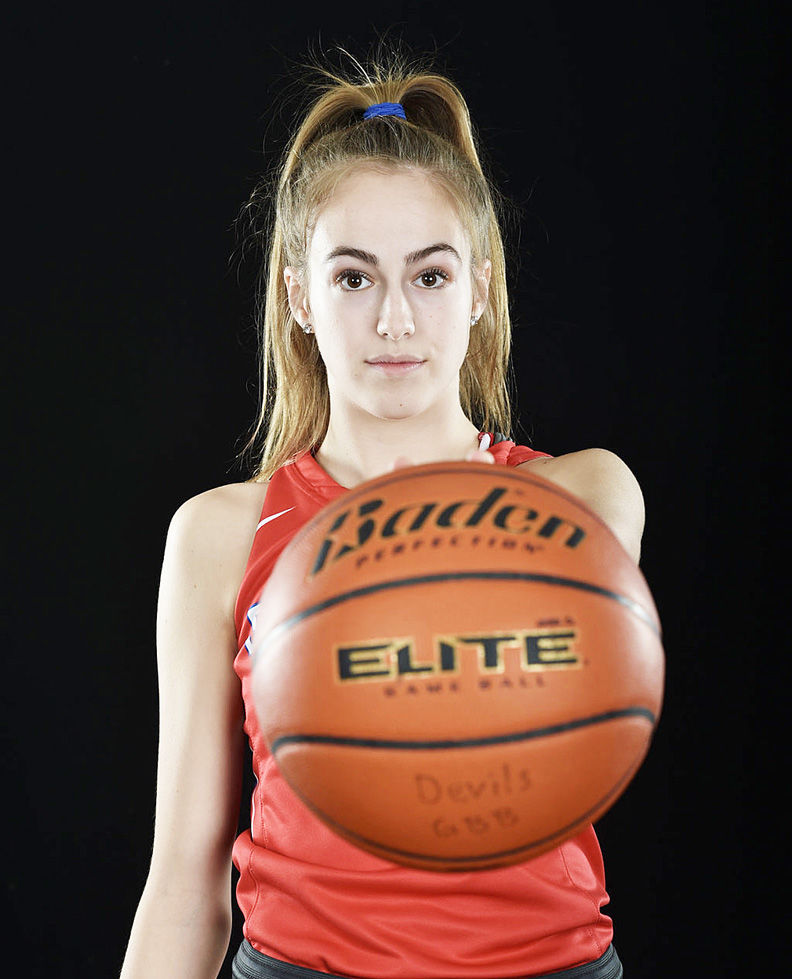 MARINA CALLAHAN has been a three-time Middlesex League All-Star for the Burlington High girls basketball team. This past season she was also co-MVP of the ML’s Freedom Division. And she is still only a junior. 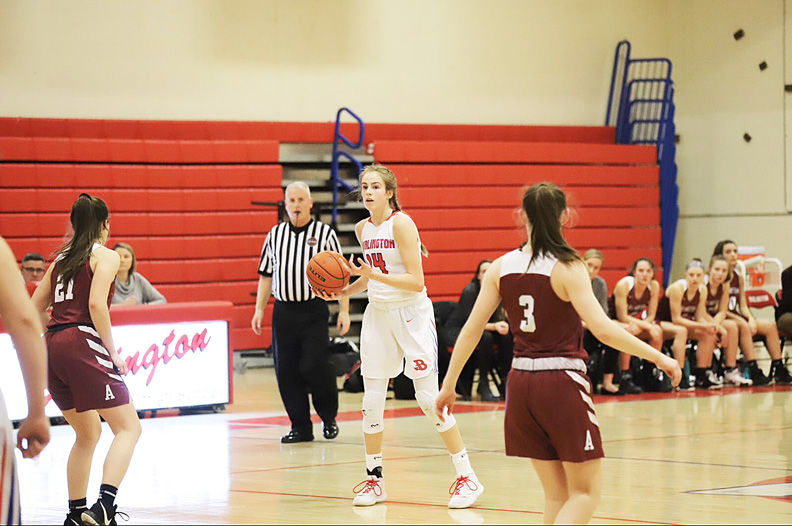 BURLINGTON’S MARINA CALLAHAN has excellent vision and court awareness as a point guard while also possessing the height (6-0) to be able to score at the rim or shoot over defenders. The Burlington girls basketball team has evolved playing through Callahan who averaged a double-double this season in points (13.1) and rebounds (10.3).

MARINA CALLAHAN has been a three-time Middlesex League All-Star for the Burlington High girls basketball team. This past season she was also co-MVP of the ML’s Freedom Division. And she is still only a junior.

BURLINGTON’S MARINA CALLAHAN has excellent vision and court awareness as a point guard while also possessing the height (6-0) to be able to score at the rim or shoot over defenders. The Burlington girls basketball team has evolved playing through Callahan who averaged a double-double this season in points (13.1) and rebounds (10.3).

BURLINGTON — If you’re around the football sidelines during the fall sports season as the weather goes anywhere from warm in September to frigid on Thanksgiving morning, you will find Marina Callahan blissfully cheering on her classmates as a cheerleader for the Burlington High football team.

If you fast forward a few weeks later in the sports calendar, you will find a fearless, determined leader who has been a staple of the Burlington High girls’ basketball team for the last three seasons.

Callahan, a junior, has gone on to be named a Middlesex League Freedom Division All-Star for three straight years and this past year was Freedom co-MVP.

Like most “ballers”, Marina Callahan started her basketball journey in the local town clinics in Burlington before venturing into the world of youth travel basketball.

It was there where her game started to take shape and before long, she was being recruited by the one AAU program she has been a part of since seventh grade, the Evolution basketball program.

“It was about that time where I needed to make a decision,” said Callahan. “I remember my dad telling me that we need to move on from the gymnastics and the cheering and focus on basketball because you are going to be really good.”

So, Callahan, who is 6-foot tall, made the decision to focus on playing basketball with Evolution as she prepared to enter high school.

When Callahan began high school as a freshman, she went back to her first love of cheering making the football cheering squad as a freshman where she has been a member of the team ever since. She will be captain next year as a senior.

As she entered the winter season of her freshman year, Callahan knew she was trying out for the basketball team and Burlington coach Pam MacKay knew about her future captain.

“I knew who she was, and it was actually (BHS boys) coach (Phil) Conners who made a comment to me about her,” said MacKay. “I invite the incoming kids to our summer league, and she stuck out.”

Not only did she stick out, she was thrust into the starting lineup as a freshman on a senior-laden team and the start was better than anyone could have imagined.

“I remember being in the locker room before that first game and she put my name on the board to start and I just smiled,” recalled Callahan. “That group of seniors were very welcoming to me and were just a good group of teammates to be around.”

Callahan went on to score 21 points in her first career game and had a solid freshman season averaging 6.7 ppg, 4.7 rebounds, 3.5 steals and 2.5 assists flashing her growing all-around game for a BHS team that made the tournament.

Entering her sophomore season, Callahan was primed to have a breakout season from her off-guard position but an injury to then point guard Madison Lebaron left a need that her coach knew only one person could easily step into.

“I needed her to run the point and that’s what she did for me sophomore year,” said MacKay. “I think this was when her game started to become so well rounded.”

While the team struggled and didn’t make the tournament, Callahan’s game took off to the next level with her improving her statistics in every offensive category including a career-high 10 assists in a game against Arlington.

Entering this past season, Callahan was named a captain, as a junior and led the team to a 15-win season and a second-place finish in the ML Freedom Division before falling in the first round of the Div. 2 North tournament in overtime to Dracut.

Despite the team disappointment of an early-round tournament exit, Callahan took her game and her leadership skills to the next level.

The team added a strong freshman in Alyvia Pena, who was an All-Star, to go along with a strong group of seniors and Callahan.

The numbers improved yet again with Callahan averaging 13.1 ppg, 10.3 rebounds, 5.8 assists, 3.7 steals and 3.6 blocks/per game. She set career highs in points scored in a game with 28 against Winchester and a career-high 23 rebound game against the Sachems in a second meeting later in the season.

“She added in the deep shot to her scoring game this year,” said MacKay. “It was another year of adjustments as she needed to learn to be ‘the guy’ but she quickly recognized matchups and what she needed to do. And that was just on offense.

“She may have been a bigger presence on defense because of the way she could just stop a play with a steal or a block,” said the coach.

In addition to her presence on the court, Callahan became a leader of the team, including mentoring the freshman Pena, whom she developed a relationship with on the AAU circuit.

“I saw a lot of myself in her from the time I was a freshman and I would see her get frustrated at times,” said Callahan. “I would just remind her of how good she was because I knew she was going to help our team.”

What is left for Callahan is an even bigger senior season. When she was asked about it, her aspirations immediately went to team first.

“There are some good teams in our league, but I want to win the league,” said Callahan. “I want to win at least one tournament game.”

While you may notice Callahan literally cheering on her classmates this coming fall, you will most certainly notice her leading her basketball team on the floor towards another strong season as she winds up a fantastic career.