MATT MULVEY shows his determination to succeed in basketball. The Reading native, who plays for Brooks School in North Andover, recently received a scholarship offer from UMass Lowell. 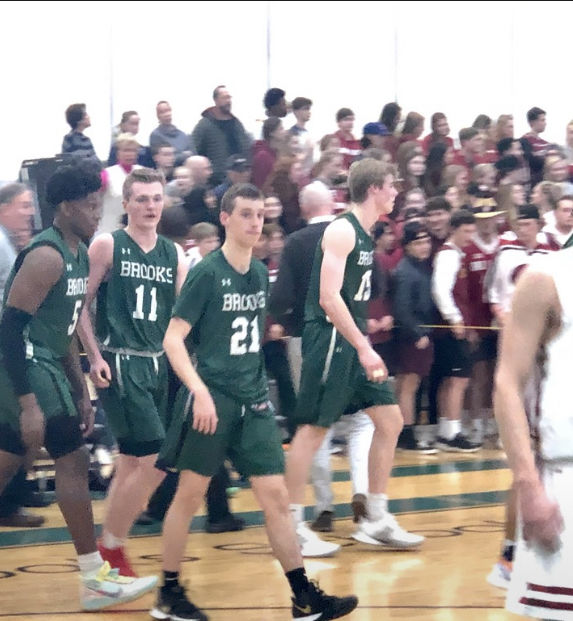 MATT MULVEY (21) left Reading High to play at the Brooks School where he knew he would be surrounded by highly-talented players.

MATT MULVEY shows his determination to succeed in basketball. The Reading native, who plays for Brooks School in North Andover, recently received a scholarship offer from UMass Lowell.

MATT MULVEY (21) left Reading High to play at the Brooks School where he knew he would be surrounded by highly-talented players.

Matt Mulvey is a prime example of someone who wanted something bad enough that he worked hard and achieved what he was after. For him it was in the game of basketball.

Choosing to leave Reading High after his sophomore year in 2017-18, Mulvey headed to the Brooks School in North Andover to further his education and his basketball career. Fast forward now two years to the present, and that decision by Mulvey has paid off with a Division 1 basketball scholarship offer from UMass Lowell on the table.

For a 16-year-old to know clearly what he wanted at the time, and then go out and accomplish it, is certainly admirable.

“To leave Reading High was a lot about my development as a player,” said Mulvey, now 18. “It definitely wasn’t easy. I was sad to leave my friends, my teammates, and coach (Paul) Morrissey. Coach (John) McVeigh (Brooks coach) had a proven track record of success at Brooks to improve players and I knew I was going to play against great competition.”

Although he was undersized as a freshman, he was brought up to the varsity near the tail end of the 2016-17 season. He got brief minutes in a few games. Then in the final two varsity games, looking like a baby-faced seventh-grader and at just 5-foot-6, he went for 15 points (on five 3-pointers) against Woburn and then scored 16 points in the final game against Belmont.

Bigger things (literally) were ahead of him as a sophomore where he grew to 5-10 and became a full-fledged starter as the team’s point guard. A broken arm when he crashed to the floor driving to the hoop, however, curtailed his sophomore year at Reading High at mid-season. Mulvey was settling in nicely at the point for the Rockets and had scored in double figures in six of the seven games until he got hurt late in the Burlington game.

During that spring, he announced he was going to leave Reading High for the Brooks School.

“I was looking at Middlesex, Pingree and Brooks,” said Mulvey. “But, Brooks had spoken to me the most.”

At Brooks, Mulvey got what he was after as he continued to work and study hard. His work habits did not go unnoticed by McVeigh.

“Matt works as hard as any player I've coached in my 17 years here at Brooks,” said McVeigh. “He loves the game of basketball and he is relentless in his pursuit of improvement.”

Repeating his sophomore year in his first year at Brooks, Mulvey came off the bench and was primarily a standstill shooter.

But, to really improve as an all-around player, Mulvey knew he had to be more rounded. He worked very hard to improve his strength and athleticism, which combined with his continuous skill development, has helped him to become a player college coaches will want on their teams.

“Obviously I can improve on everything,” said Mulvey. “I really try to pay attention to defense now, that is a huge priority for coach McVeigh.”

Having grown to 6-foot-1, and after a solid AAU offseason with the Middlesex Magic, Mulvey earned a starting role as a junior on a talented Brooks team that would go on to a 24-3 season, winning the ISL championship, and finishing runner-up (to Canterbury) in the NEPSAC Class B tournament.

Mulvey averaged 11 points per game on a team that had six players average between 10-14 points. Always a great shooter, Mulvey sank 68 threes on the season.

“He is a terrific shooter and every team we play knows it, so he is constantly facing a ton of defensive attention,” said McVeigh. “He made a huge jump this year from his sophomore to junior year thanks to his hard work.

“This year, he started every game and was a much more complete player at both ends of the court,” the coach went on. “He is still a great shooter, but is now a much more effective ball-handler and facilitator, and his defense has improved tremendously since he arrived here last year.”

Like all students in the state of Massachusetts, Mulvey is continuing the school year remotely from home. He was a commuting anyway to North Andover.

“I’ve gotten into a little bit of a routine as far as my school work is concerned,” he said. “So it is not all that bad.”

Unfortunately with the “stay-at-home” order also in place, there are no sports to play. This would be a big spring AAU basketball season for players like Mulvey to continue being seen by college coaches. Fortunately he does have that offer from UMass Lowell in his pocket.

“It is a little early, and I am wide open to anything,” said Mulvey about his college recruitment. “Coach (Pat) Duquette (UMass Lowell) coach has talked with my dad (Tim) and seen me develop the past two years. The only thing I can really say is I want to stay in the northeast and go to a school that values education and basketball. And I want to play for a coach that advocates for his players.”

Mulvey is hopeful that he can get back to playing AAU ball during the summer “live” period which begins in July. That is when thousands of AAU basketball teams and players go around the country to national AAU tournaments to compete in front of college coaches in what is termed a “live” period which simply means an evaluation period.

“I can’t go to any gyms, but fortunately we have a hoop in the driveway and I have some weights in the basement,” said Mulvey. “My dad gave me some drills to do and I can work out with my brother. I am trying to create my own shot off the dribble and get in the paint and score.”

Still with another year at Brooks, and still in the midst of this pandemic, Mulvey is not sure when he’ll make college choice.

“Right now it is just all about staying well and getting through this,” he said.

“Matt is a terrific student, which will open doors for him at the next level at the highest academic colleges,” said McVeigh. “More than all of this, Matt is just a terrific young man. He is kind, humble, and does everything the right way on our campus and in our community. We're so lucky to have him here and I am confident his best basketball is still in front of him.”