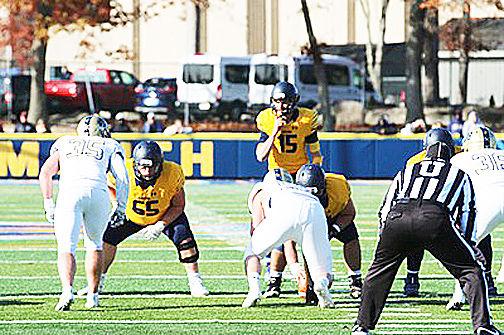 Ryan Qualey of Woburn has transitioned over to UMass Dartmouth as a two-sport athlete. In the fall Qualey is a quarterback (No. 15) on the football team.

As one of six quarterbacks on the team, Ryan Qualey had to compete for playing time as a freshman. 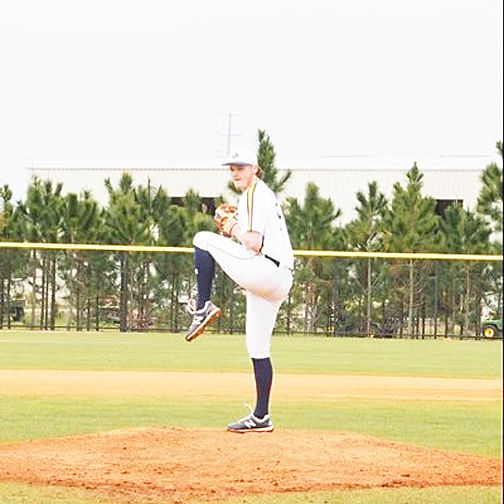 In the spring Ryan Qualey takes to the mound as a right-handed pitcher for the UMass Dartmouth baseball team. Unfortunately, like all spring college athletes, Qualey’s baseball season was cut short due to COVID-19. The Woburn standout won his only start during the brief season.

Ryan Qualey of Woburn has transitioned over to UMass Dartmouth as a two-sport athlete. In the fall Qualey is a quarterback (No. 15) on the football team.

As one of six quarterbacks on the team, Ryan Qualey had to compete for playing time as a freshman.

In the spring Ryan Qualey takes to the mound as a right-handed pitcher for the UMass Dartmouth baseball team. Unfortunately, like all spring college athletes, Qualey’s baseball season was cut short due to COVID-19. The Woburn standout won his only start during the brief season.

Woburn’s Ryan Qualey will be quick to tell you do not underestimate the level of play in Division 3 college athletics.

“It is not that far below Division 1 than you would think,” he said. “Everyone can play. There is good talent.”

A four-year quarterback of the Woburn High football program, where he holds school records for career touchdown passes (33) and career passing yards (3076), Qualey was also recently named as the lone QB to the Woburn Football All-Decade team for the 2010’s by the Daily Times Chronicle.

Qualey’s high school athletic career didn’t stop there as he was a standout pitcher for the baseball team.

Qualey (6-3, 210) saw a decent amount of action in his first year as a two-sport college athlete at UMass Dartmouth. But, for the most part, Qualey has had to wait his turn and will continue to have to compete for playing time throughout his career.

Originally Qualey was just going to play football at UMass Dartmouth as he committed well prior to last year’s high school baseball season. The Woburn standout had his college choices come down to Western New England, Endicott and UMD.

But once Qualey started putting together an outstanding baseball season on the mound for the Tanners last spring, he decided he might also like to play baseball in college.

“I emailed the coach that I was going to go to the school to play football and also wanted to play baseball,” recalled Qualey. “They sent an assistant coach to watch a playoff game and invited me to play for the team.”

First up for Qualey was the college football season. He was one of six quarterbacks on the roster and a junior, Stephen Gacioch, was the returning starter. There was pretty fierce competition for spots on the depth chart behind Gacioch from players who were all good high school quarterbacks.

Qualey saw some spot action in mostly a mop-up role until Gacioch was injured during the Western Connecticut game on Nov. 2. Staying ready, Qualey got the call to go in. Qualey, whose roommate is former Woburn teammate and current UMD  football teammate Stephen Kolodko, got the Corsairs on the board with a 23-yard touchdown pass in a game that would see-saw early.

Qualey threw another first-half touchdown pass and UMass Dartmouth was able to pull away with two fourth-quarter touchdowns for a 28-12 victory.

“I wasn’t too fazed and it was a pretty smooth transition,” said Qualey in playing QB in college. “It was a lot more spread out and fast-paced than it was in high school”

Against Western Connecticut, Qualey finished 9 of 21 for 112 yards with two touchdowns and two interceptions. And as he showed in high school, he is a sneaky good runner as he gained 27 yards on seven carries with a long gain of 11 yards.

Qualey continued to start the next week in the Senior Day game against Mass Maritime. The Corsairs couldn’t continue their winning ways as they fell, 28-14.

Mass Maritime jumped out to a 21-0 lead before UMass Dartmouth rallied behind two touchdown passes of 46 and 26 yards from Qualey to make it 21-14.

The freshman QB wound up completing 18 of 45 in the game for 214 yards, two touchdowns and one i-n-t.

And with no senior quarterbacks on the roster and if everyone returns, along with any incoming freshmen, he realizes there will again be some pretty fierce competition for playing time.

In baseball, Qualey was just rounding into form when the season was cut short.

The Corsairs had a fine 9-1 record to begin the campaign when their season was shut down on March 14.

Even on the Division 3 level for college baseball the season begins early.

“We began that Monday (Jan. 27) when we got back from break,” said Qualey.

Oftentimes on the D-3 level for baseball, you take games when you can get them, especially in the northeast.

UMass Dartmouth opened its season against Emerson on Saturday, Feb. 22 on the Turf Field at St. John’s Prep. Temperature-wise it was in the upper-40s. However, the following weekend (Feb. 28-29) it played two games against Becker at the New England Baseball Complex in Northboro, which also has a Turf Field, it was in the mid-30’s.

“I was out in the bullpen for those games and it was really cold,” said Qualey.

UMD then headed to Florida for just over a week during its spring break. It played games from March 6-13 mostly in Auburndale, Florida which is in the middle of the state and just north of the Boston Red Sox old spring training home in Winter Haven.

Qualey saw his first action on the mound in its game on Monday, March 9 against Dubuque (Iowa) in Auburndale.

The righthanded pitcher allowed just three hits and struck out seven over six innings to earn his first collegiate win.

“I was going to be a mid-week starter once we returned home,” said Qualey of the team’s plans for him.

But, that all got short-circuited when the COVID-19 pandemic shut the world of sports down.

Now home, all Qualey says he is able to do is play catch with former Woburn baseball teammate Dane LeBert (Northern Essex) and hopes things with loosen up so he can play for the Melrose Americans of the Intercity League this summer.

“I focus on baseball until midway in July when I will start working out for football,” said Qualey.

Qualey may play football and baseball, but now he is playing the waiting game like everyone else.