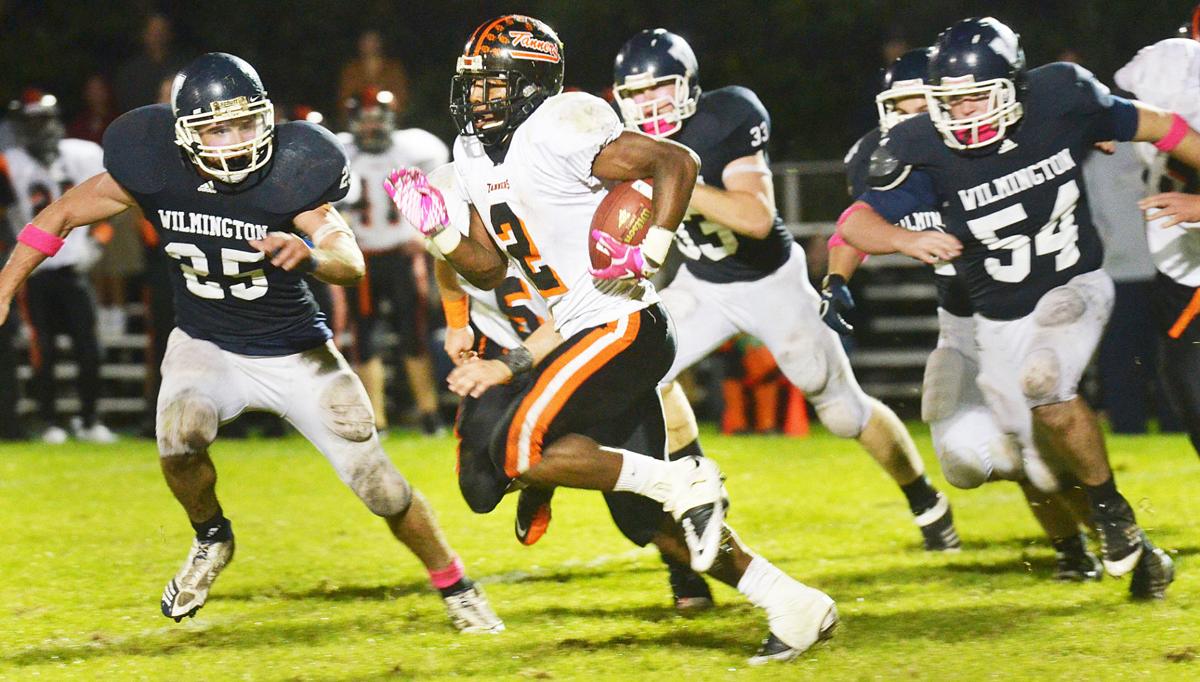 Chucky Ortiz makes our list for the Woburn High football 2010’s All-Decade Team. Ortiz, shown here running for one of his five touchdowns in the 2011 game at Wilmington, had two 1000-yard seasons with the Tanners in 2010 and 2011. He is actually on our list twice, being selected as a kickoff/punt returner also. 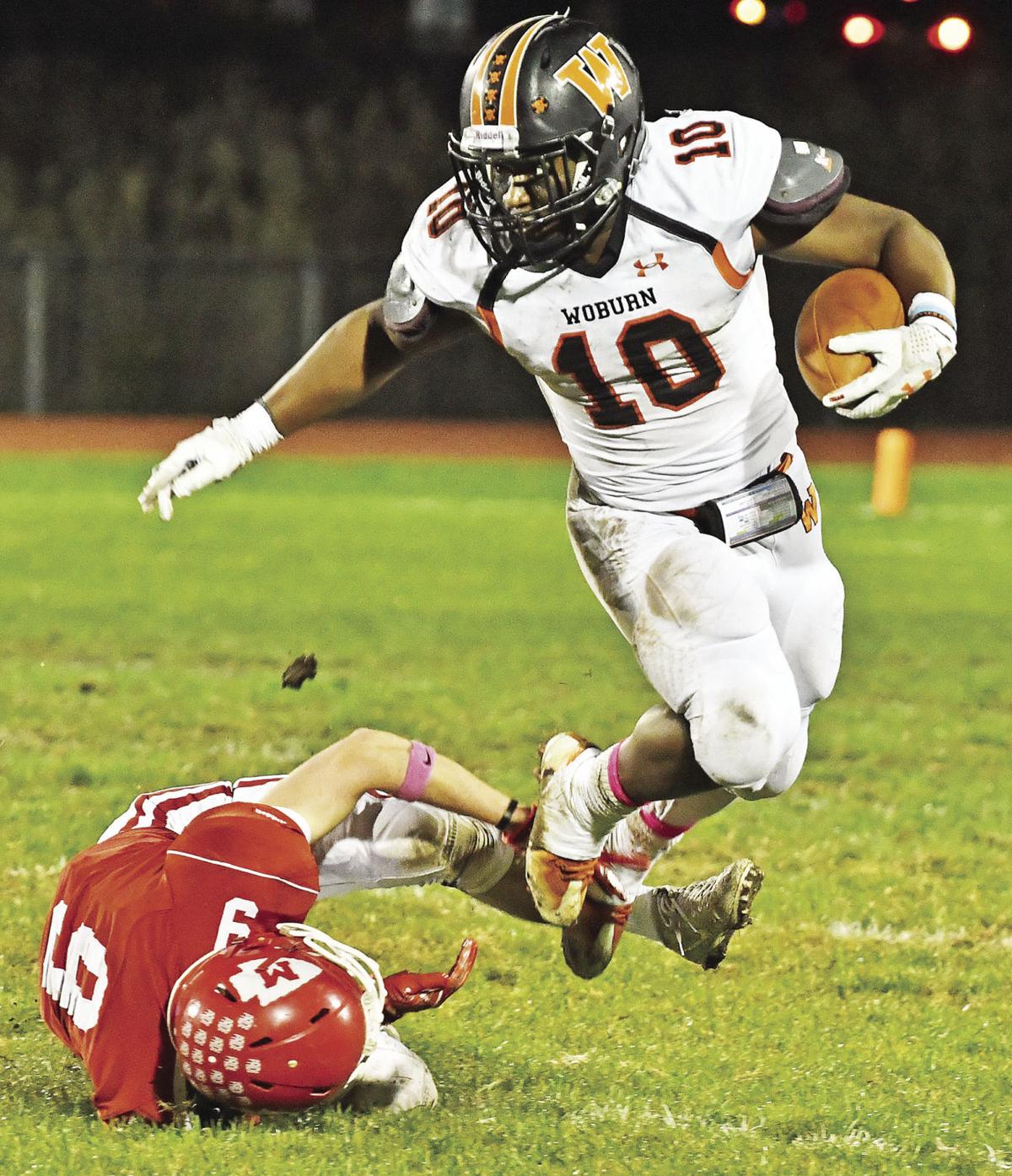 Isaiah Cashwell-Doe may have only played one season (2017), but his running ability, strength, vision and instincts paved the way for a 1092-yard year with 14 touchdowns for a 7-4 team that fall.

Chucky Ortiz makes our list for the Woburn High football 2010’s All-Decade Team. Ortiz, shown here running for one of his five touchdowns in the 2011 game at Wilmington, had two 1000-yard seasons with the Tanners in 2010 and 2011. He is actually on our list twice, being selected as a kickoff/punt returner also.

Isaiah Cashwell-Doe may have only played one season (2017), but his running ability, strength, vision and instincts paved the way for a 1092-yard year with 14 touchdowns for a 7-4 team that fall.

Some of the players are quite obvious while others are open for interpretation. Well, so be it.

Just taking one player for the quarterback position and that is Ryan Qualey.

Qualey is also in the top-five in many single-season passing categories.

There wasn’t a more electric Woburn player in the decade than Ortiz who starred in 2010-11.

He scored running with the ball, catching the ball, intercepting the ball (school record 100-yard TD return) and returning kicks and punts.

Ortiz had two 1000-yard rushing seasons. He is second all-time in points scored with 284. He is also one of four players to score five touchdowns or more in a single game for Woburn High.

Cashwell-Doe was here for just one season but what a season it was.

He gave the 2017 team a home-run hitter who could score from any where on the field. But, just as importantly he could grind out the tough inside yards.

Instinctively, he was one of the most pure rushers in Woburn High history with his strength, speed, vision and instincts.

Marvin Jean makes the list as he started for parts of three seasons and made All-Star. Injuries limited his full potential, however.

The tight ends almost seem to be the same player as Dennis Peary and David Pratt were both tall, strong, athletic players who could catch the ball and block. And each was a standout at defensive end.

The offensive linemen were all All-Star players beginning with Brendan Flaherty in 2010 who also went on to star at Bridgewater State.

Rory and Pat O’Brien make the list as well as A.J. Santiago from the 2012 team. Dave MacNeil, part of “all-decade” twin brothers, makes it on the offensive side.

Nick Coviello and Jimmy Pappas were tabbed from recent teams.

On defense, it is very linebacker-heavy and there are some quality players who were forced to settle for honorable mention.

Ryan McCarthy was a tackling machine at the beginning of the decade (2010) while Robert Maracayo had a decade-best 75 tackles in 2013.

Eri Ibrahimi was a force for two seasons as was David Langlois.

Tyler Hayden was the leader defensively on the 2016 team. Hayden made the big stop on the potential winning two-point conversion try by Winchester on Thanksgiving that allowed coach Rocky Nelson to go out a winner.

That alone may have gotten Hayden on this squad.

Cornerback Tyler Joseph, who was Liberty MVP in 2014, heads the secondary. There was no better cover corner in the decade than Joseph who also stood out on offense.

On the line, you could make the argument that Peter Cole was the best of the decade. You could also argue Cole could easily make the offensive side of the ball.

Nick Dangora, Justin McRae were stalwarts in the middle part of the decades in the line.

Dangora kicked placements for three seasons. He made nine career field goals with a long of 37. He converted 79 extra points.

Jeremy MacNeil is the punter. His 41.3 average in the 2012 season is the single-season school record. He had a long kick of 57 yards that season.

There were a handful of excellent kick returners in the decade but clearly have to go with Ortiz as the best.

Ortiz returned two punts for TDs in 2010 and one kickoff return for a score that season. In 2011, he took two more punts to the end zone while two kickoff returns also went the route.