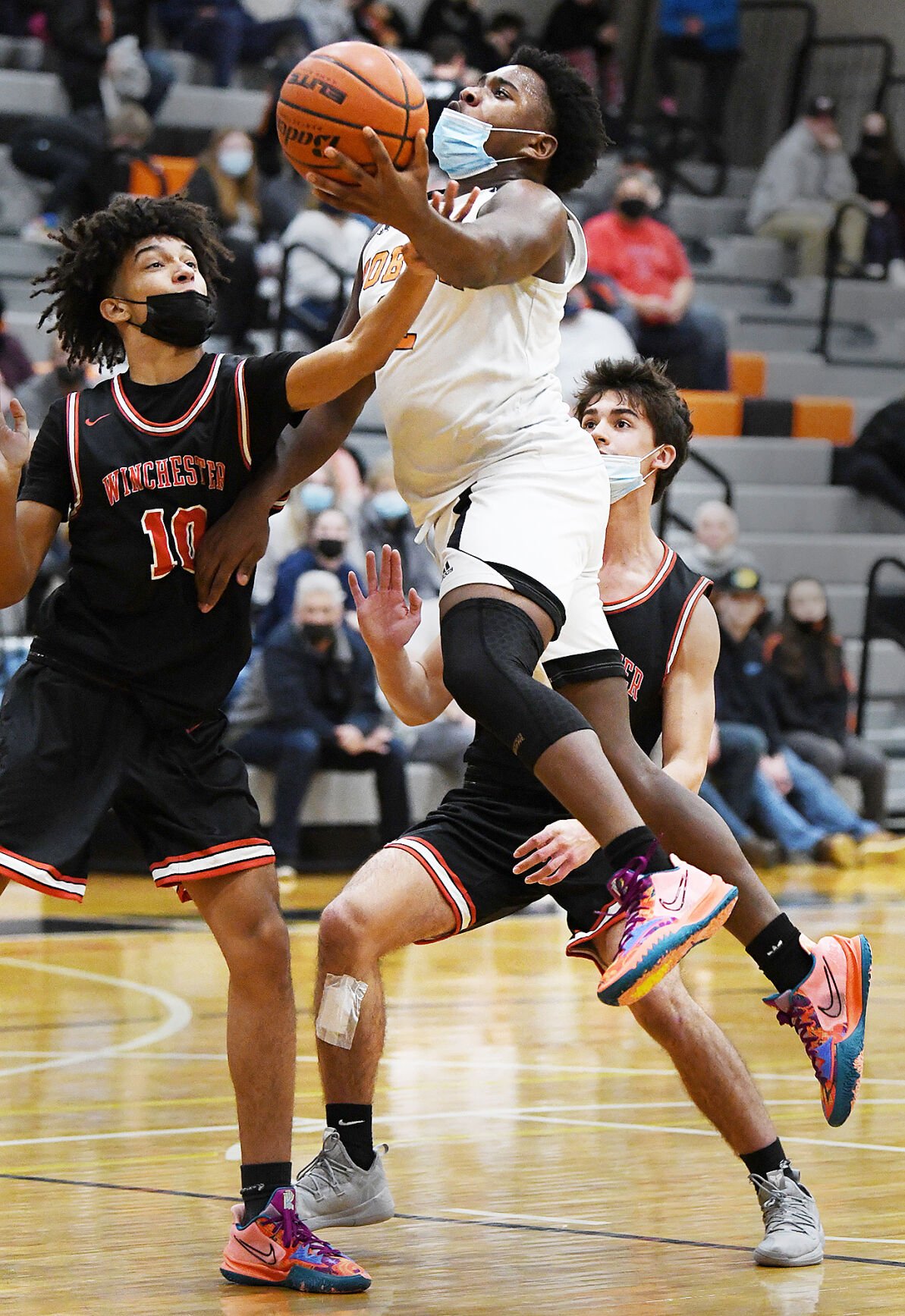 WOBURN'S JALEN MERLAIN drives to the basket near the end of the third quarter while Winchester players Elijah Prophete (10) and Ben Wilson (5) defend. Winchester broke a third quarter tie to go on and defeat the Tanners, 46-35 at Torrice Gymnasium. 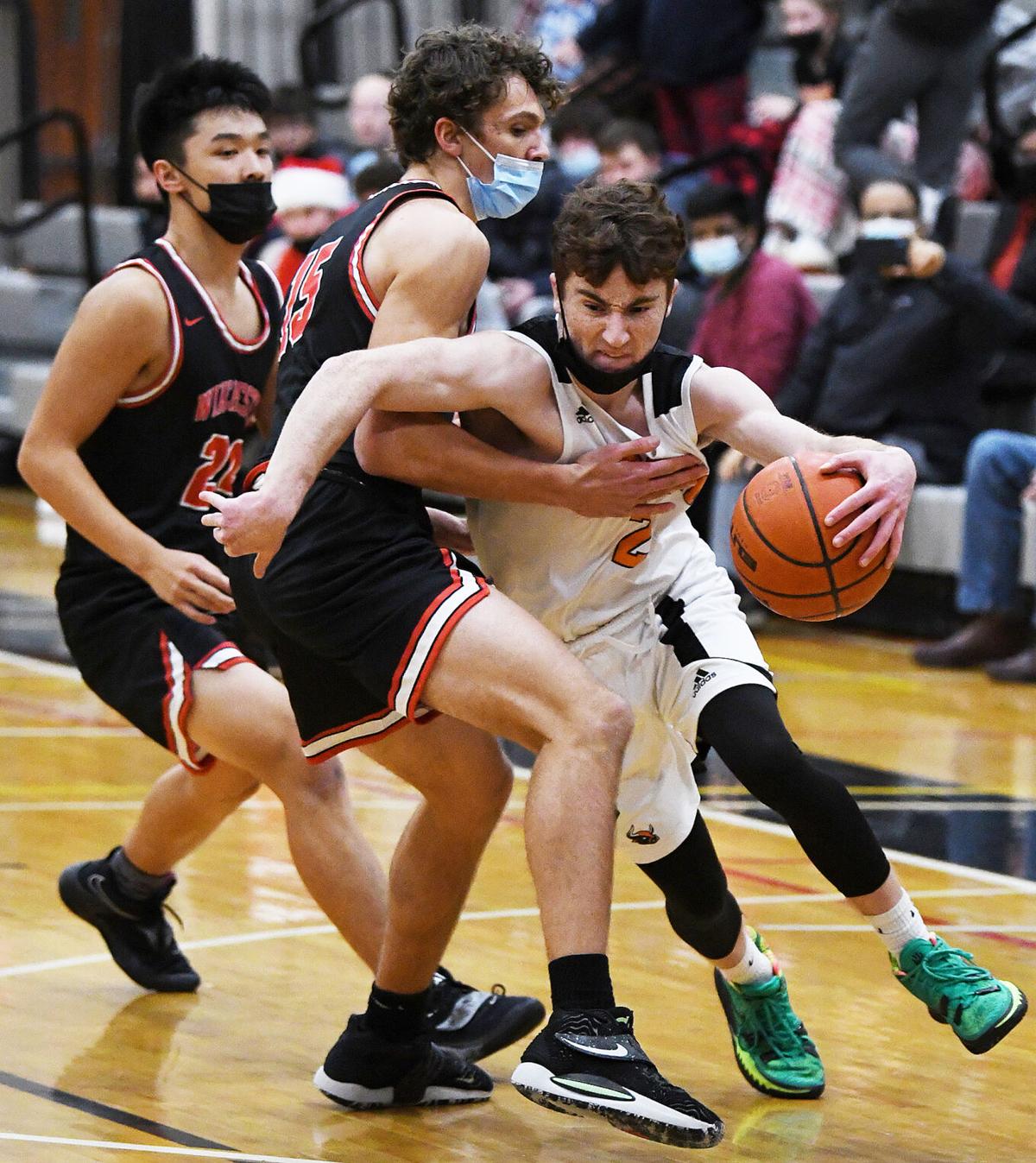 Woburn's Michael Chiodo is held by Winchester's Quinten Pienaar during the game at the Torrice Gymnasium. Winchester's Matthew Hu (left) backs up the play.

WOBURN'S JALEN MERLAIN drives to the basket near the end of the third quarter while Winchester players Elijah Prophete (10) and Ben Wilson (5) defend. Winchester broke a third quarter tie to go on and defeat the Tanners, 46-35 at Torrice Gymnasium.

Woburn's Michael Chiodo is held by Winchester's Quinten Pienaar during the game at the Torrice Gymnasium. Winchester's Matthew Hu (left) backs up the play.

WOBURN — One very good strength of the Woburn High boys basketball team is its senior guard combination. At the high school level, having experience, skilled guards can take you a long way.

But, at some point they cannot just do it alone and the Tanners are going to need a third, or fourth scoring option.

A lack of scoring depth hindered Woburn chances at getting a win last night as Winchester broke a third-quarter tie and rushed to a 20-9 fourth quarter en route to a 46-35 victory over the Tanners at Torrice Gymnasium.

Neither team shot the ball particularly well. Ultimately Winchester could rely on its two returning All-Star players Quinten Pienaar (15 points) and Phil Sughrue (11) to get it to the finish line.

Woburn’s senior guard duo of Michael Chiodo and Joe Gattuso led the way for the Tanners. Chiodo was hitting his patented pull-up jumper in the lane most of the night, but Gattuso had a cold first half as the Tanners only scored 14 points (12 by Chiodo). Winchester took a 20-14 lead into the half.

In the second half Gattuso caught fire and scored all of his 13 points while Chiodo finished with 16. But, only sixth-man Jalen Merlain (four points) and Liam Dillon (a basket at the buzzer) were the only other players to score.

Woburn first-year coach Randy Parker recognizes some of his team’s offensive shortcomings, but knows he can counteract that with solid defense.

“We’ve held every team to under 50 points so far,” said Parker. “I thought we got OK looks in the first half, but the ball just wasn’t going in. We seemed a little frustrated. But, defensively we got stops. Defensively we’re great.

“Our goal going into the third quarter was hold them under 10 which will probably lead us to win the quarter, which we did,” Parker went on. “So we fought back into it. We tied the game after three, but then it felt like there was a lid on the rim.”

Winchester went on an 8-0 run to open the fourth quarter. Matthew Hu had a put back, Pienaar sank a pull up and Jeff Tan threw in some sort of lefty runner that swished. Pienaar then sank a pair of free throws to make it 34-26 before Gattuso broke the ice for Woburn with two made free throws with 3:36 left.

Woburn only made two baskets the rest of the way that mattered, both by Gattuso including a 3-pointer.

The Red & Black were steady at the free throw line. They didn’t make a basket for a five-minute stretch during the final quarter. Going 9 for 10 to start the quarter from the charity stripe helped it get to an 11-point Winchester lead at 41-30 with just under a minute left.

“I don’t think either team got an offensive rhythm unfortunately,” said Winchester coach John Fleming. “It was just grind it out and try to find a way to win. Obviously we got into free throws and we made most of our free throws down the stretch which was nice. But, we’ve got to be better offensively than that.

“Just too many missed opportunities early, we missed some easy ones around the hoop and I think because of that we just could never find our groove and our rhythm. But, a win’s a win and we’ll take it.”

Winchester improves to 3-1 having won its last three since stumbling at Belmont on opening night. Woburn dipped back to .500 at 2-2 and Parker is welcoming some time off for his team. The Tanners do not play again until Tuesday, Jan. 4 at Stoneham.

“The good thing is we get another crack at them,” said the Woburn coach about Winchester. “Now going into holiday vacation, our kids have been working so hard the first four weeks, we’re 2-2 and I think we are in a decent spot.”

Winchester faces Medford next Tuesday (4:30 p.m.) in the opening game of the inaugural Bob Bigelow Classic.