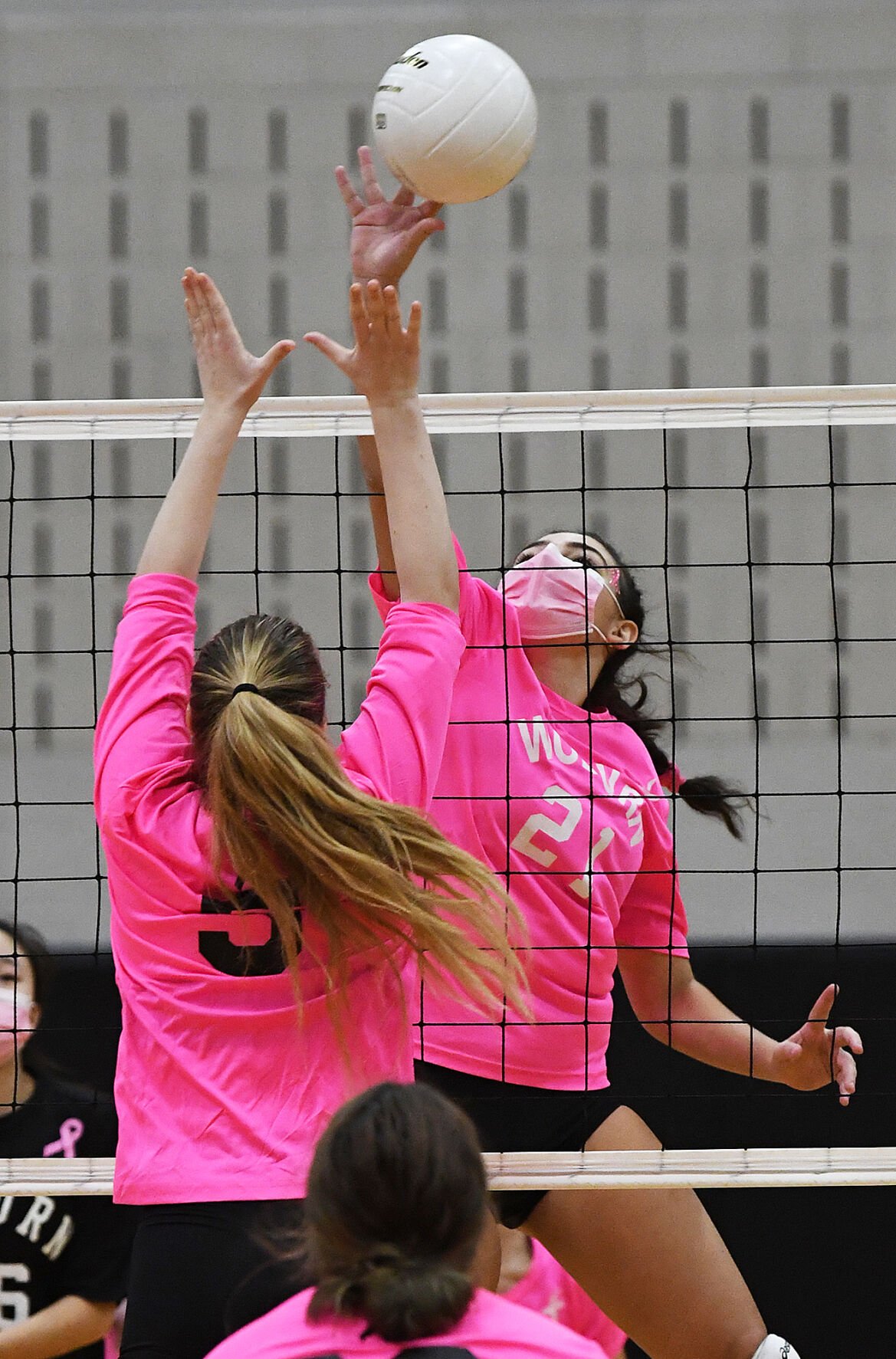 Woburn's Sophia Furxhi tips the ball back towards Reading's Lauren Fischer during action from Tuesday’s girls volleyball game at Torrice Gymnasium. The Tanners lost to the Lady Rockets, 3-1. The teams were wearing pink shirts to raise awareness to breat cancer. 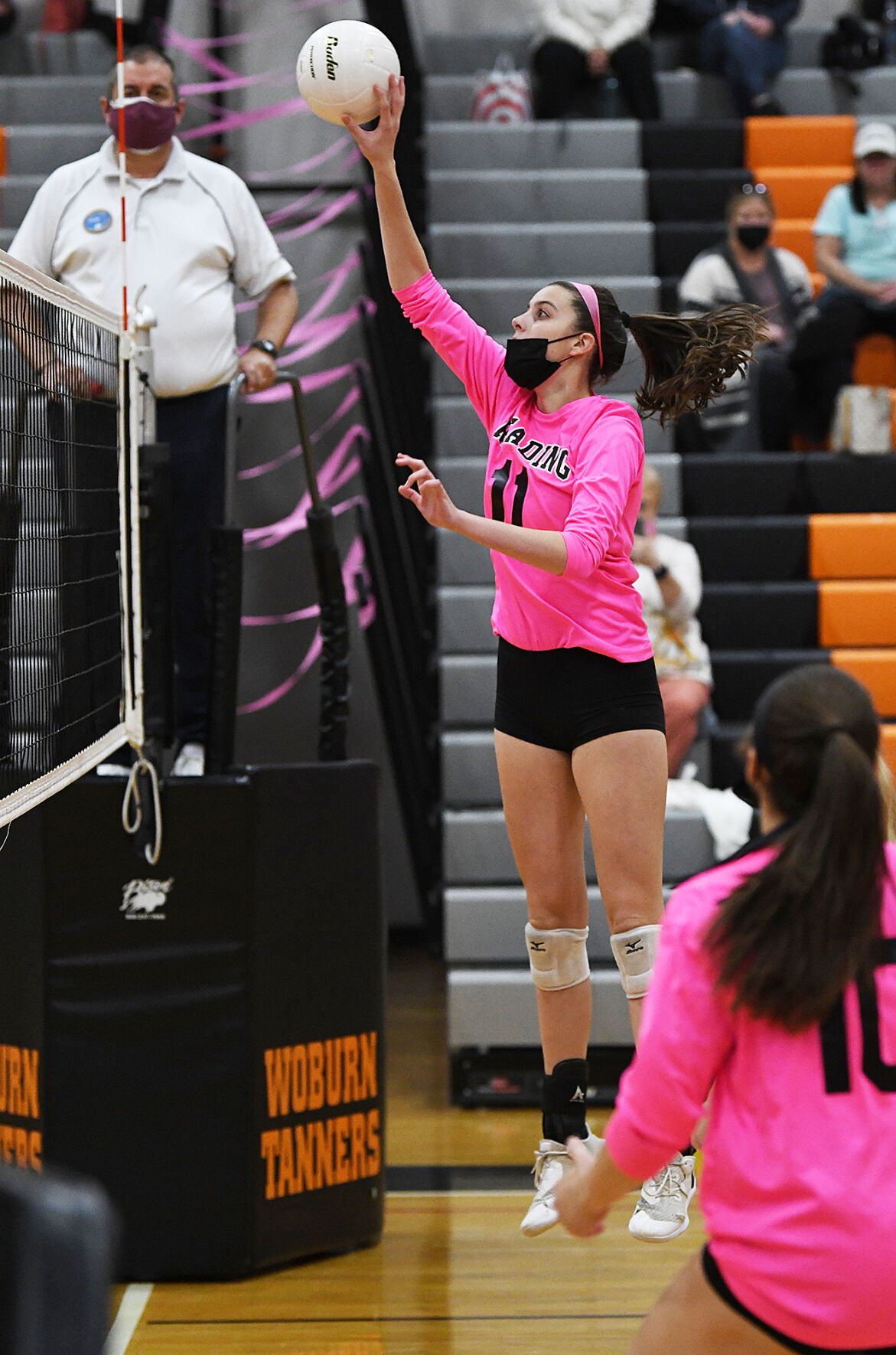 Reading 's Abby Farrell gets the short ball back over the net against Woburn. Farrell continues to be a difference maker in games and she proved that again in this one finishing with 17 kills, three aces and six digs. 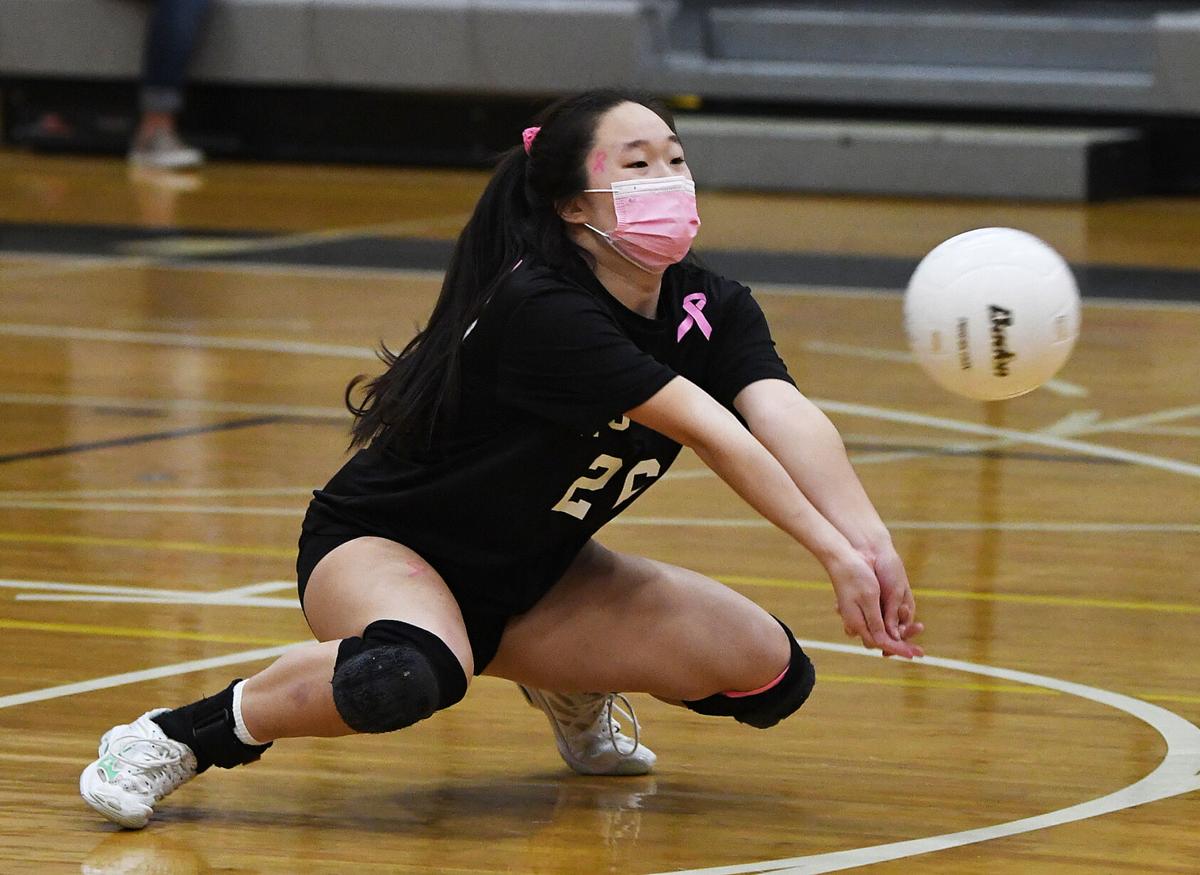 Woburn's Sophia Furxhi tips the ball back towards Reading's Lauren Fischer during action from Tuesday’s girls volleyball game at Torrice Gymnasium. The Tanners lost to the Lady Rockets, 3-1. The teams were wearing pink shirts to raise awareness to breat cancer.

Reading 's Abby Farrell gets the short ball back over the net against Woburn. Farrell continues to be a difference maker in games and she proved that again in this one finishing with 17 kills, three aces and six digs.

WOBURN — In a battle of two good teams, it was the Reading High girls volleyball team that came out on top against Woburn.

The Lady Rockets beat the Tanners, 3-1, Tuesday night behind an impressive performance where every set went down to the end. After Woburn (12-5) took the first meeting earlier this season, Reading wanted revenge and it got just that.

“That was an awesome game,” said Reading coach Michelle Hopkinson. “I am really proud of the adjustments we made. The girls played well. Woburn is a great team, but we needed this win. We are capable and I have been making small changes and I think we were able to capitalize on missed serves by Woburn. They are a solid team no doubt and this was a great match-up.”

“It was disappointing,” said Woburn coach Scott Roy. “It was hard for us to get going and Reading is a great team. You have to expect you are going to get the best out of the team you have already beat the last time out. That is what has been happening to us with Arlington and now Reading. We started off kind of flat, but we honestly didn’t play poorly. It was the serving that got the best of us.”

Woburn struggled with its serving and had a hard time getting momentum going. Roy knows the team just has to keep working to make adjustments especially with missing two key players.

“Our trouble spot is that we can’t serve the ball over the net,” said Roy. “We have been working on it at practice trying to give new people opportunities. We have been trying anyone and everyone and every arrangement we can to get some consistent serving. It is not an excuse, but the two players we are missing Amanda (Spolidoro) and Reilly (Davis) our two of our best servers, so it highlights how much we are missing them.”

In set one, with the score 4-3 in favor of Woburn, the Lady Rockets scored four straight where junior captain Abby Farrell was leading the way earning a kill and three aces to give her team a 7-4 lead.

Farrell continues to be a difference maker in games and she proved that again in this one finishing with 17 kills, three aces and six digs.

With Reading clinging to a tight 9-8 lead, the Tanners took five of six on back-to-back aces by junior Hannah Nowell and solid blocking by Meghan Qualey to take a 13-10 lead.

The set continued to be close from there as it went all the way until the two were locked at 19-19.

Reading was able to break the tie and went on to score six of the final eight points to win set one 25-21.

Sophomore McKenna Varney served well and junior Bella McGonagle contributed a kill and both were effective all game for Reading.

“I changed up my outside hitters to McKenna (Varney) and Bella (McGonagale) and both of them were great,” said Hopkinson. “They played well defensively and served well and they made a difference in the game.”

In set two, Reading opened up a 4-0 lead after solid serving from junior Evie Taylor.

Woburn fought right back and with the help of two kills by Sophia Furxhi and two aces by Kara Silver and was able to take an 8-7 lead.

From there Reading held control of the game until the Tanners came back to tie at 21. This set needed extra points as both teams were not letting up.

Woburn tied the game at 26 on a missed serve by Reading, but the Lady Rockets finished out strong getting a kill and an ace by senior captain Anna Hughes to win 28-26.

Set three proved to be no different as no team had a lead larger than two points until the Tanners were able to break through.

With the score 19-17 in favor of Woburn, it went on to score six of the final eight points, where Furxhi’s loud hits came into play to force a fourth set.

The fourth set proved to be no different with both sides battling all the way. Reading had a seven-point lead on Woburn and after more solid serving from Silver pulled Woburn within three, the Lady Rockets scored seven of the final 10 points of the match to win 25-17 and earn the big win.