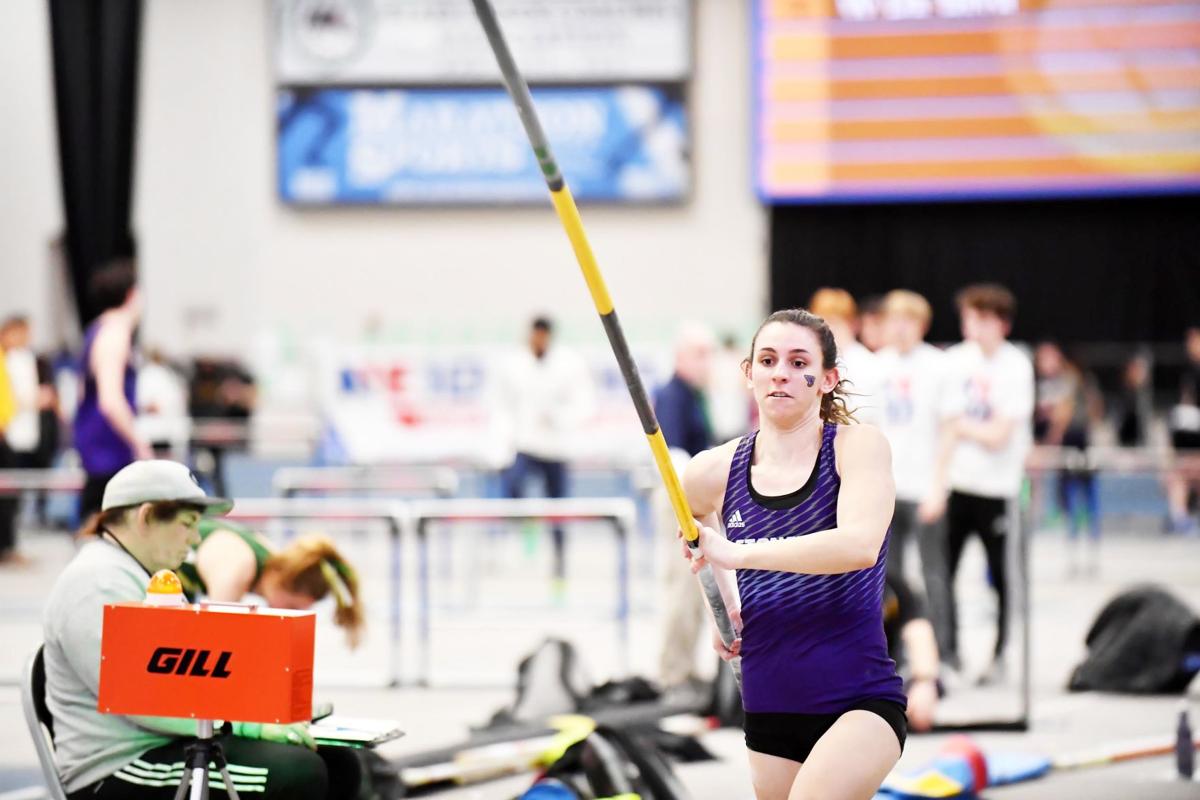 HALEY LIGHTBODY had an outstanding winter season with the Stonehill College women’s indoor track team. Lightbody, a freshman, was recently named Northeast-10 Conference Field Rookie of the Year. Lightbody may have been better known during her high school days for basketball but her decision to pursue track in college is proving to be a good one. 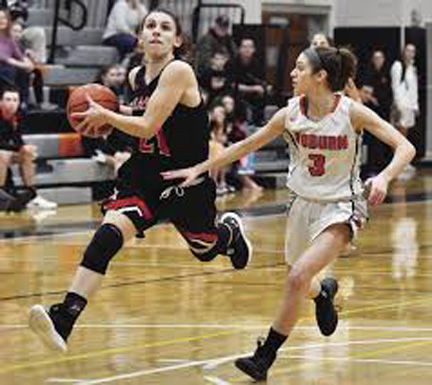 HALEY LIGHTBODY had an outstanding winter season with the Stonehill College women’s indoor track team. Lightbody, a freshman, was recently named Northeast-10 Conference Field Rookie of the Year. Lightbody may have been better known during her high school days for basketball but her decision to pursue track in college is proving to be a good one.

During her four-year career as an outstanding two-sport high school athlete at Reading Memorial High School, Haley Lightbody shined on the basketball court and on the outdoor track circuit.

As a four-year member of the girls’ basketball team, Lightbody rose to great heights while leading the Lady Rockets to a successful run her final three years.

Averaging 18.4 points per game during a Middlesex League Liberty Division-MVP All-Scholastic senior year in 2018-19, Lightbody scored 1,326 points for her career which places her second in program history behind only all-time leader Olivia Healy.

While she emerged as a standout player on the basketball court, she pursued her athletics at the collegiate level in track at Stonehill College. She was recently named as the Northeast-10 Conference Field Rookie of the Year for the 2019-20 indoor track and field season by the league’s head coaches.

“It’s a great honor, and I’m very excited about it,’’ said Lightbody. “It’s something (Rookie of the Year) I never really think about. I just go out there and try to do my best. I always want to push myself to the next level and put the work into it. We had a great indoor season, and it was a lot of fun. It’s definitely something to build for next year.”

A veteran of the basketball court since an early age, Lightbody developed into a solid player in her middle school years while playing for Mass Evolution and Middlesex Magic AAU Basketball teams. She also continued to compete at the AAU level in both the fall and spring seasons during her high school years at RHMS.

During that time, she showcased her talents throughout New England and New York, competing in regional tournaments.

“It was a lot of fun, and I’ve pretty much played basketball for about 12-13 years of my life,’’ said Lightbody. “To be able to compete in tournaments throughout all over New England as well as New York is an awesome experience, and it was definitely a lot of fun. It gave me the opportunity to meet a lot of different athletes from everywhere.”

As a four-year varsity veteran on the basketball court, Lightbody early-on developed into one of the team’s leading scorers and was the architect in leading the Lady Rockets back to prominence in her four seasons.

After a rock-bottom 2-20 season in 2014-15, Lightbody came on the scene the next season as a freshman. Her emergence guided the Reading girls hoop program to three straight tournament berths in her sophomore through senior years.

While her accolades on the basketball court have been well documented, and may have overshadowed her high school track accomplishments, Lightbody was just as an equal force in track.

As a four-year outdoor track athlete, she competed in the long jump, high jump as well as the pole vault and the 100 hurdles as well as serving as a part on the 4x100 relay team.

In her sophomore season, Lightbody excelled in the pole vault and as a sophomore, earned a state title and was an all-state champion, recording a height of 11-3 on both occasions.

Lightbody’s aspirations as a pole vaulter began during her middle school years as her mother was an accomplished pole vaulter herself. Currently, she practices her technique with various coaches at the Patriot Pole Vault Club located in Westborough.

“Basketball was pretty much my life early on and then I wanted to expand my athletic horizons in track,’’ said Lightbody. “My mom was a great pole vaulter and she really inspired me to compete in the event. I’ve worked very hard with her as well as my coaches at Reading High. It’s not really a popular event during the dual meets, but in the league meet and at states and all-states, it’s huge.”

“It was awesome winning the (state title) in the pole vault,’’ said Lightbody. “It’s not really an easy event, and it takes a lot of patience and discipline. My coaches were also pretty much new to the event as well, as not every team in the league as a (pole vaulter). We all worked hard together and we continued to do that while I was in high school.”

In her junior year, Lightbody continued to dominate on the pole vault was an Eastern Mass Champion with height of 11-6 and finished second in All-States with a 10-9.

Lightbody also qualified for states in the long jump with a leap of 17-1, but also recorded a personal record of 18-0.

“I thought I had a chance to win the (pole vault) in the all-states, but I didn’t think I had one of my best days and I finished second,’’ said Lightbody. “I was a little disappointed because I thought I could’ve won the state title, but I just came up short.”

In her senior season, Lightbody was selected as a captain and competed in the high jump along with long jump, pole vault, the 4x100 relay and the 100 hurdles.

In the All-States, Lightbody finished with a height of 11-0 and competed in the long jump and put up a leap of 17-5. As a result of her accomplishments, Lightbody was named to the Middlesex League All-Star team for the third consecutive year.

“Track is a lot of fun, and it’s definitely more individual based,’’ said Lightbody. “It’s still a team concept, but it’s a mixture of both and I really love doing track and I’ve really enjoyed it.”

While Lightbody received much attention on the basketball court, she decided to take her athletic talents at the collegiate level to track.

“I played basketball for the past 12-13 years of my life and I thought I would go into college doing something different,’’ said Lightbody. “I’ve always loved track as much as I’ve loved basketball and I just thought there would be more of an opportunity to compete at the college level in track than in basketball.”

As for colleges, she received strong interest from the Stonehill Track and Field Program to join the squad.

“They (Stonehill) really wanted me to be a part of the track and field team,’’ Lightbody. “It was a lot of fun, and I saw it as an opportunity for me. I went and visited the campus and just fell in love with it. It was a great fit for me, and it was a decision I didn’t regret one bit.”

In her first season on the indoor team, Lightbody competed in the pole vault and the long jump. During her debut, Lightbody was named as the Northeast-10 Field Rookie of the week during the indoor season and scored in two events during the Northeast-10 Indoor Track and Field Championships. In the pole vault, she recorded the individual title recording a personal best height of 11-9.75, just .25 off the school record. Lightbody also recorded a leap of 17-6.25 inches in the long jump and placed fifth.

Qualifying for the New England Championships, Lightbody placed eighth out of 23 in the pole vault with a height of 11-7.75. As for her successes on the oval at the collegiate level, Lightbody credits head coach Michael Delgado along with assistant coach Dan Schwartz.

“It was a great experience, and I really enjoyed my first year of indoor so much,’’ said Lightbody. “This year was the first year I ever did indoor, and my coaches were so supportive and they really worked hard with me on my form and technique in both the long jump and the pole vault.”

As for competing in college, Lightbody reveled in the challenges that awaited her.

“Competing at the collegiate level was definitely a challenging experience for me,’’ said Lightbody. “In the winter season, we competed against Division 1 teams such as Northeastern, UMass Amherst as well as (University of Rhode Island), so it was definitely more individually based as well. At the same time, I really developed a close bond with my teammates, and I have the opportunity to bond with teammates from all over New England and beyond.”

With the outdoor spring season cancelled due to the COVID-19 outbreak, Lightbody expressed disappointment, but remains optimistic and hopeful for continued success next season.

“It’s disappointing that we’re not competing in the spring season, but it’s totally understandable why the season was cancelled,’’ said Lightbody, who is a biology major. “The health and safety of people are more important than sports, and we’re just doing what we can do stay positive. It’s tough, especially for the seniors, but we’re doing the best we can do given the situation. We’ve been in touch virtually, and we’re just trying to stay positive, get out there and get some training in while we can. I’m already definitely looking forward to competing next season.”