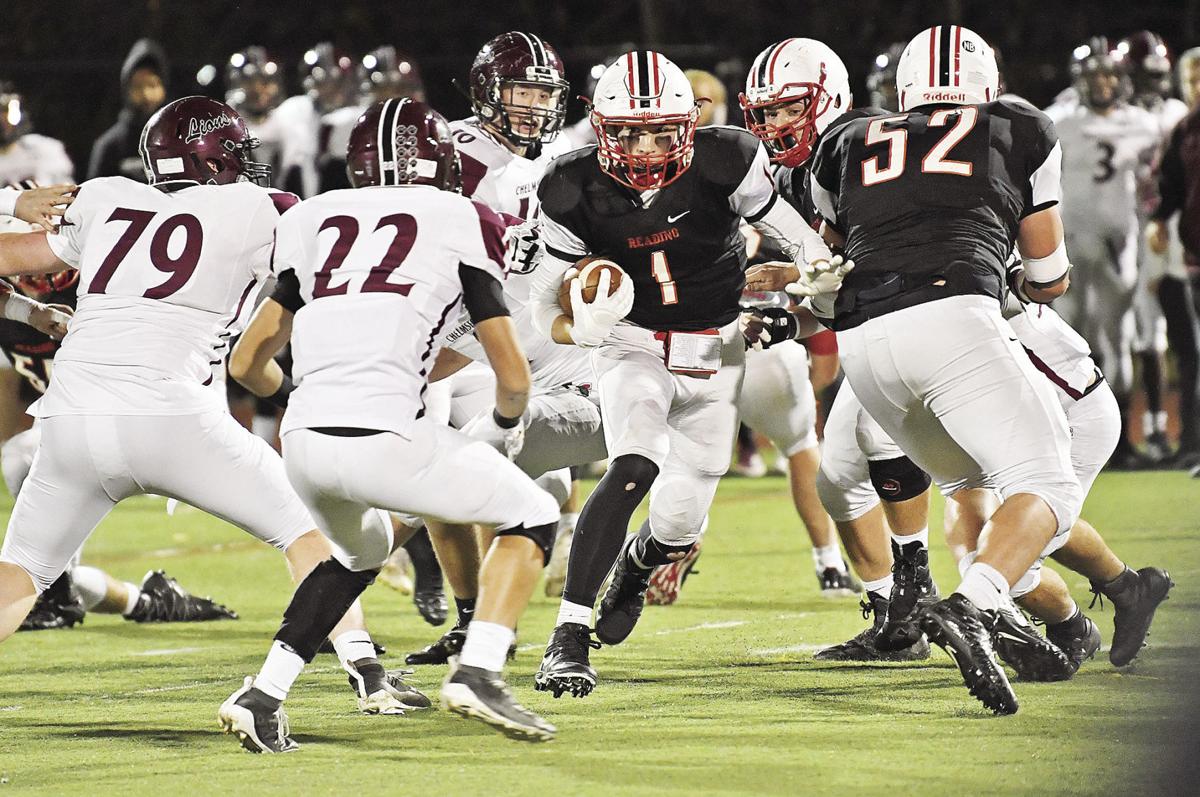 READING’S DANNY 'PLAYOFF' DIMARE (1) ripped through Chelmsford for a season-high 187 yards rushing on 19 carries with three touchdowns. He also had an interception and a fumble recovery on defense. Here, he follows the block of Thomas O'Brien (52) for the opening. The Rockets started the playoffs off with a dominating 40-0 win over Chelmsford on Friday. 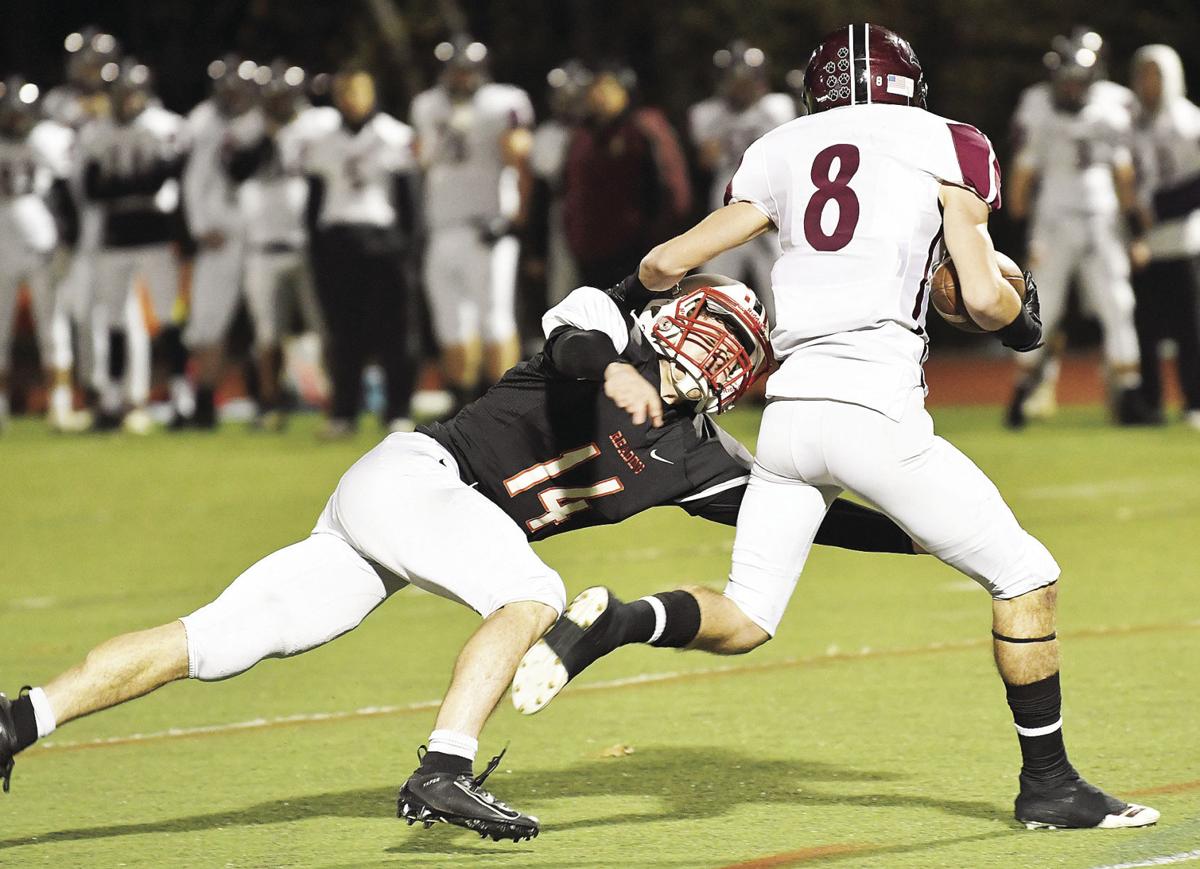 Reading's Jeremy Rosh moves in to attempt to tackle Chelmsford's Dylan Brotherston during action from Friday’s Division 2 North playoff game at Hollingsworth Field. The Rockets romped to a 40-0 victory. Reading will host North Andover on Friday (7 p.m.) in the semifinals. 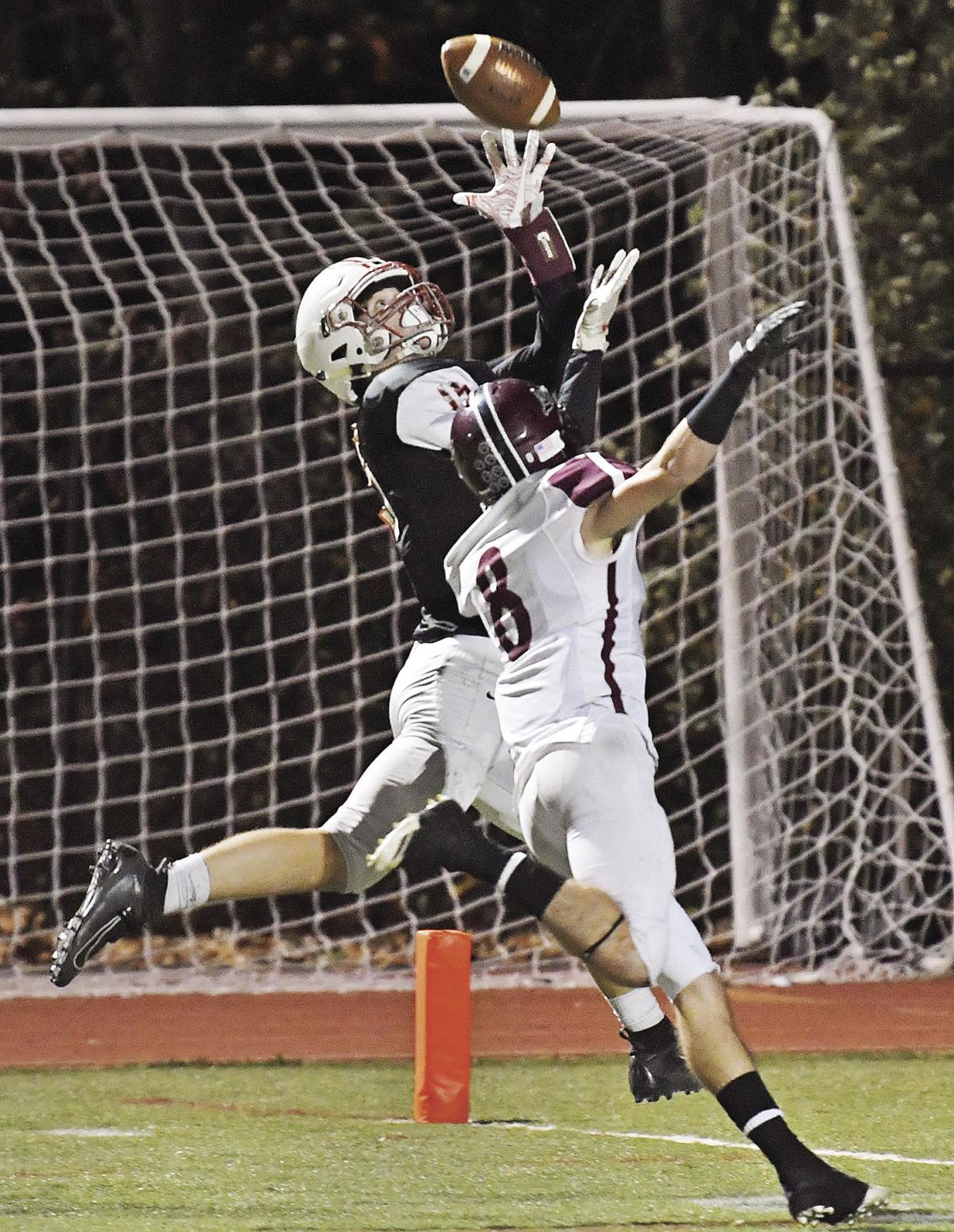 Reading's Patrick Harrigan made an over-the-shoulder catch for one of his two touchdown receptions during Friday’s win.

READING’S DANNY 'PLAYOFF' DIMARE (1) ripped through Chelmsford for a season-high 187 yards rushing on 19 carries with three touchdowns. He also had an interception and a fumble recovery on defense. Here, he follows the block of Thomas O'Brien (52) for the opening. The Rockets started the playoffs off with a dominating 40-0 win over Chelmsford on Friday.

Reading's Jeremy Rosh moves in to attempt to tackle Chelmsford's Dylan Brotherston during action from Friday’s Division 2 North playoff game at Hollingsworth Field. The Rockets romped to a 40-0 victory. Reading will host North Andover on Friday (7 p.m.) in the semifinals.

Reading's Patrick Harrigan made an over-the-shoulder catch for one of his two touchdown receptions during Friday’s win.

READING — The Reading High football team could not have scripted a better start to the postseason.

Domination on both sides of the line of scrimmage. A balanced attack on offense with steady production in the running game. Big plays in special teams, and a shutout performance by the defense.

When the FieldTurf had settled, Reading ran over and shut out visiting Chelmsford, 40-0, Friday night at Hollingsworth Field in the first round of the Div. 2 North playoffs.

Yeah, excitement and optimism is about at its height in Reading. Just have to keep working on those extra points, though.

“Very, very happy with how we played,” said Reading coach John Fiore. “Look, we’ve got to get some stuff together in the kicking game, on the PATs. But we made some plays in the other phases of the game that were really outstanding tonight. I’m really happy with how the kids played, especially defensively.’

Dan DiMare played a terrific two-way football game for the Rockets. The 6-2, 190-pound junior running back rushed for a season-high 187 yards and three touchdowns on 19 carries (9.8 yards/carry). He also had an interception and a fumble recovery at his outside linebacker position.

“Dan’s becoming a heck of a football player, and the offensive line had a nice game as well,” Fiore said. “They’re doing a good job working together, and can’t say enough about our receivers and quarterback as well, they’re just doing a good job of functioning as a sum of the parts. Just really thought the kids were awesome tonight.”

Reading’s resurgent ground game opened up space in the passing game for freshman quarterback James Murphy, who completed 10 of 18 passes for 128 yards and two touchdowns, both to wide receiver Patrick Harrigan.

The road is about to get harder. No. 4 North Andover handled No. 5 Westford Academy 35-7 and comes into Reading playing its best football of the year. But the Rockets appear to be doing the same.

“We’ll take our best shot (Friday) at North Andover, the defending state champions,” Fiore said. “They’ve done a great job all year growing each week, and this is an important time for them to take a step forward. I’m real proud with the kids for putting themselves in this position to take a shot at this. This is what it’s all about. Let the chips fall where they may.”

About the only drama of Friday’s game was whether Reading was going to preserve the shutout—easier said than done in this era of spread offenses and 12-minute quarters. Chelmsford’s best scoring opportunity came in the final minutes when quarterback Mike Lupoli (22 of 48 passing, 201 yards, interception) went 4-for-4 on a final drive to set up a first and goal at the four with seconds remaining on a running clock. But his final pass of the night fell incomplete as time expired.

The Lions also lined up for a 32-yard field goal attempt in the closing seconds of the first half, but a bad snap resulted in their kicker covering up a loose football, preserving Reading’s 18-0 halftime edge.

“It (shutout) means something,” Fiore said. “I wish we were able to make it not so close at the end, but it was good.”

DiMare got the Rockets on the board in the first quarter with a drive that highlighted all his skills, including three carries for 45 yards and a reception. One of DiMare’s carries came after a direct snap in a wildcat formation for an 11-yard gain. He followed that up with a 33-yard run to the one-yard line on a draw play, setting up a short TD plunge by the junior.

Later in the quarter DiMare recovered a fumble at the Lions’ 22 following a hit on a Chelmsford receiver by linebacker Colin DuRoss. On the next play the Rockets lined up in a three wide receiver set right, with Harrigan isolated on a defensive back at left. It was a tough matchup as the 6-4 junior beat his man in the endzone for a 22-yard TD reception.

Murphy connected with Harrigan on a second touchdown pass early in the second quarter to open up an 18-0 lead. It was probably Murphy’s best throw of the night. The freshman was hit as he threw and Harrigan was in tight coverage in the endzone, but Murphy threaded the needle for a 27-yard TD pass. Murphy’s conversion pass fell incomplete as the Rockets were 0-3 on their first three PATs.

Chelmsford cornerback Tyler Nolan had both of Chelmsford’s interceptions, including a pick at the Reading 32 with less than a minute left in the first half. A 17-yard Lupoli to Nolan pass had the Lions knocking on the door at the Reading 15, but three straight incompletions and the botched field goal attempt ended the threat.

The Rockets erased any doubt with 22 unanswered third quarter points. Safety Trevor Conroy blocked a Lions’ punt at the Chelmsford 24, then followed the rolling ball into the endzone where he fell on it for the score. This time the Rockets were successful on the point after Murphy hit Nick Perez for a two-point conversion and a 26-0 lead.

On Chelmsford’s ensuing possession DuRoss strip-sacked Lupoli and Harrigan recovered the fumble at the Chelmsford 21. Two plays later DiMare powered in his second touchdown of the night from four yards out. DiMare finished the third quarter outburst by punching in his third TD on a 21-yard run off the left side.

“That’s a tough game I feel, those 1-8s, they get a little bit of life and I feel we’ve had some tigers by the tails over the years,” Fiore said. “Just real happy how we went about things tonight and finishing it off well.”