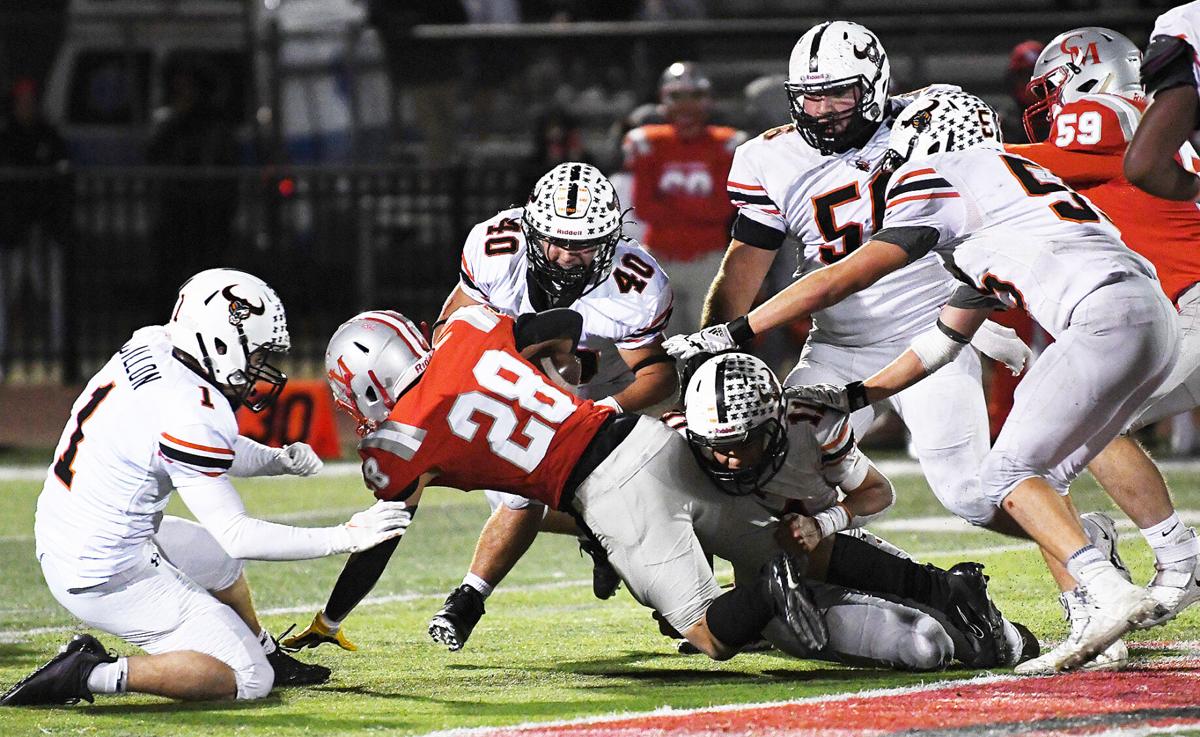 THE WOBURN DEFENSE moves in to assist Anthony Travers on this tackle of Catholic Memorial running back Lesean Sharp (28) after a short gain in the third quarter of Friday’s MIAA Division 2 state football playoff game at CM. The Tanners were no match for the No.1 ranked Scarlet Knights who won, 41-0. 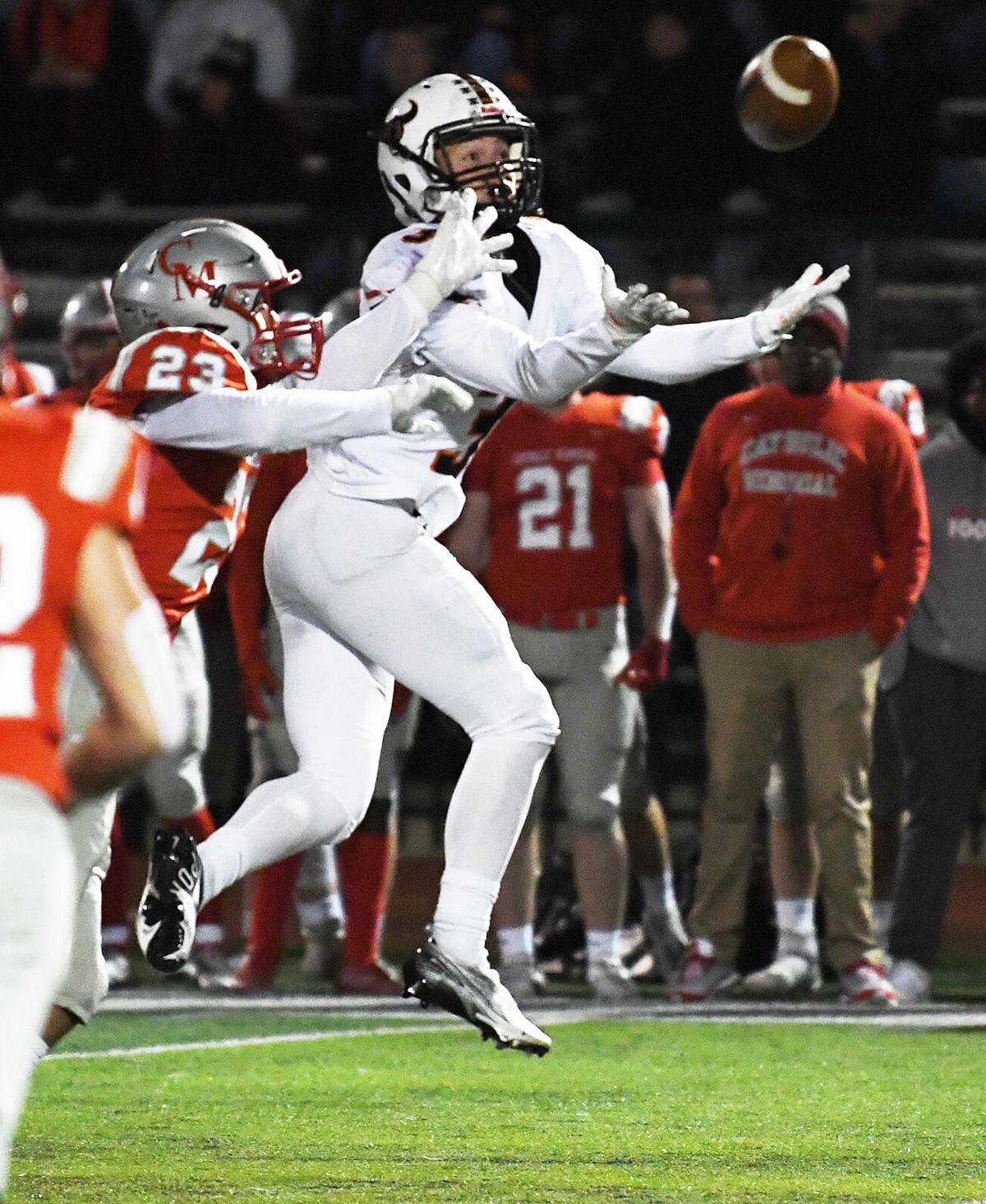 Woburn's Derek Dabrieo (3) makes a catch early in the game against CM that resulted in a first down. 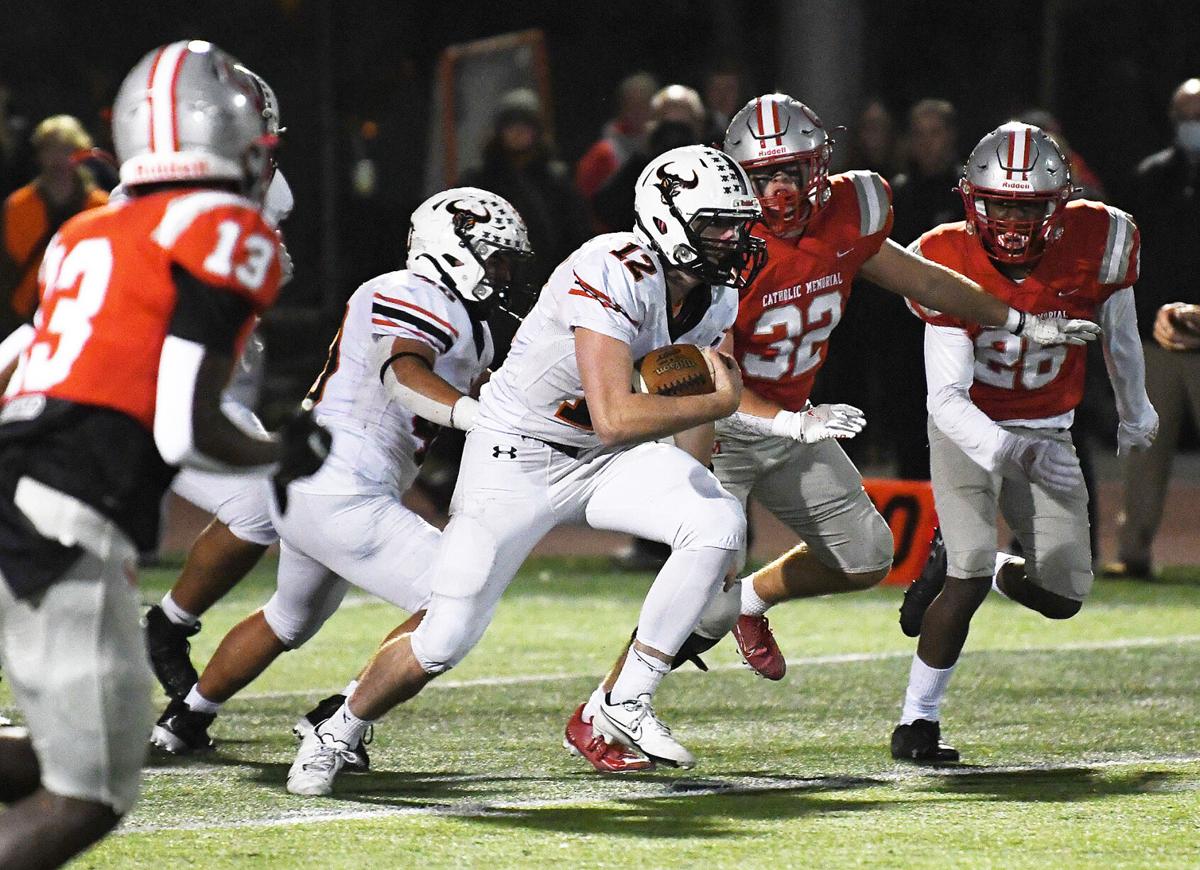 Woburn QB Brett Tuzzolo finds some running room up the middle on this carry. The Tanners' offense didn't have much success overall as it was blanked by No. 1 seeded Catholic Memorial, 41-0.

THE WOBURN DEFENSE moves in to assist Anthony Travers on this tackle of Catholic Memorial running back Lesean Sharp (28) after a short gain in the third quarter of Friday’s MIAA Division 2 state football playoff game at CM. The Tanners were no match for the No.1 ranked Scarlet Knights who won, 41-0.

Woburn's Derek Dabrieo (3) makes a catch early in the game against CM that resulted in a first down.

Woburn QB Brett Tuzzolo finds some running room up the middle on this carry. The Tanners' offense didn't have much success overall as it was blanked by No. 1 seeded Catholic Memorial, 41-0.

BOSTON — This was not a fair fight.

At face value, some might say the Woburn High football team was embarrassed by No. 1 Catholic Memorial, 41-0, on Friday night in a first-round game of the Division 2 state playoffs. But, the real institution that should be embarrassed is the MIAA which allowed this mismatch to happen.

The Tanners (6-2) never had a chance against a team that possess Division 1 college-committed talent and plays a highly competitive Division 1 high school schedule. Catholic Memorial should not be in Division 2 but the ACC the way it looks.

CM (9-0) made it look as easy as it was expected be. It scored on its first three plays from scrimmage and did so by simply running by Woburn. The Scarlet Knights covered 50, 52 and 65 yards and were quickly up 21-0 leaving nothing but a vapor trail behind them.

CM quarterback JC Petrongolo threw three touchdown passes on his four completions. The Knights only ran 27 plays in the game yet gained 334 yards of total offense and scored six touchdowns.

The Knights were the far superior team and why wouldn’t they be? They can draw talented players from all over the area who are drawn to the school’s football program by its success and as a springboard to college football. Running back Datrell Jones and wide receiver Jaeden Skeete are both committed to Boston College, and they are still high school juniors.

CM had already beaten handily quality Division 1 foes like St. John’s of Shrewsbury (44-0), St. John’s Prep (38-9) and Xaverian (41-10). So Woburn’s resume out of the lightly-regarded Middlesex League (except for Reading) was not going to stack up on this occasion.

“In my 13 years in the Dual County League, the Abare twins at Acton-Boxborough, were the best two I’ve seen,” said Belcher. “In my five years in this league the (Sal) Frelick, kid at Lexington, was the best quarterback I’ve seen. The Reading kid (James Murphy), he’s probably the second best QB I’ve seen.”

“There wasn’t a Division 1-AA player on that North Andover team, believe it or not,” said Belcher. “I think the top player, the real good one (Gabe DeSouza), went to Curry. And the QB (Jake McElroy) went on to baseball (at Holy Cross).”

Woburn had some good early moments on offense. After CM quickly got ahead 7-0, the Tanners picked up three first downs on their initial series. Their double-wing offense had CM momentarily confused while junior QB Brett Tuzzolo found Derek Dabrieo and Michael Doherty on pass completions that picked up first downs.

However, the drive ended when the Tanners turned it over on a fumble near midfield.

Woburn was not as successful on its next two drives that both resulted in three-and-outs. When it got the ball back a fourth time, it was behind 28-0.

CM missed an extra point late in the first half that would have made the score 42-0, thus having a running clock throughout the entire second half. Although that was avoided, and CM went with its reserves on offense, Woburn never really mounted a scoring drive in the second half. Its best drive ended at the CM 33 on a fumble with 4:17 to play.

Woburn did what it could to try and slow down the Knights. If they couldn’t match their speed, the Tanners worked the play-clock between offensive snaps.

“We tried to slow the game down, obviously we tried to shorten the game,” said Belcher. “You get to a point and you look at that, and the game starts to develop, and you look at the kids and say ‘we hope we can grow as individuals and grow as a team and try and end up 8-2.’ That’s where we are.

“Everyone is healthy, and we came out of it at 100 percent,” Belcher went on. “We get one more kid back now next week. I think we are down to two kids in street clothes, which is good. It’s hard tough, still, for them to go through it, but it’s over.”

Woburn will be at Newton South this Saturday in a “non-playoff” game. The Lions do not have lights. The time is TBA. This is the Tanners final game before the game against Winchester at Fenway Park on Wednesday, Nov. 24 (6:30 p.m.).