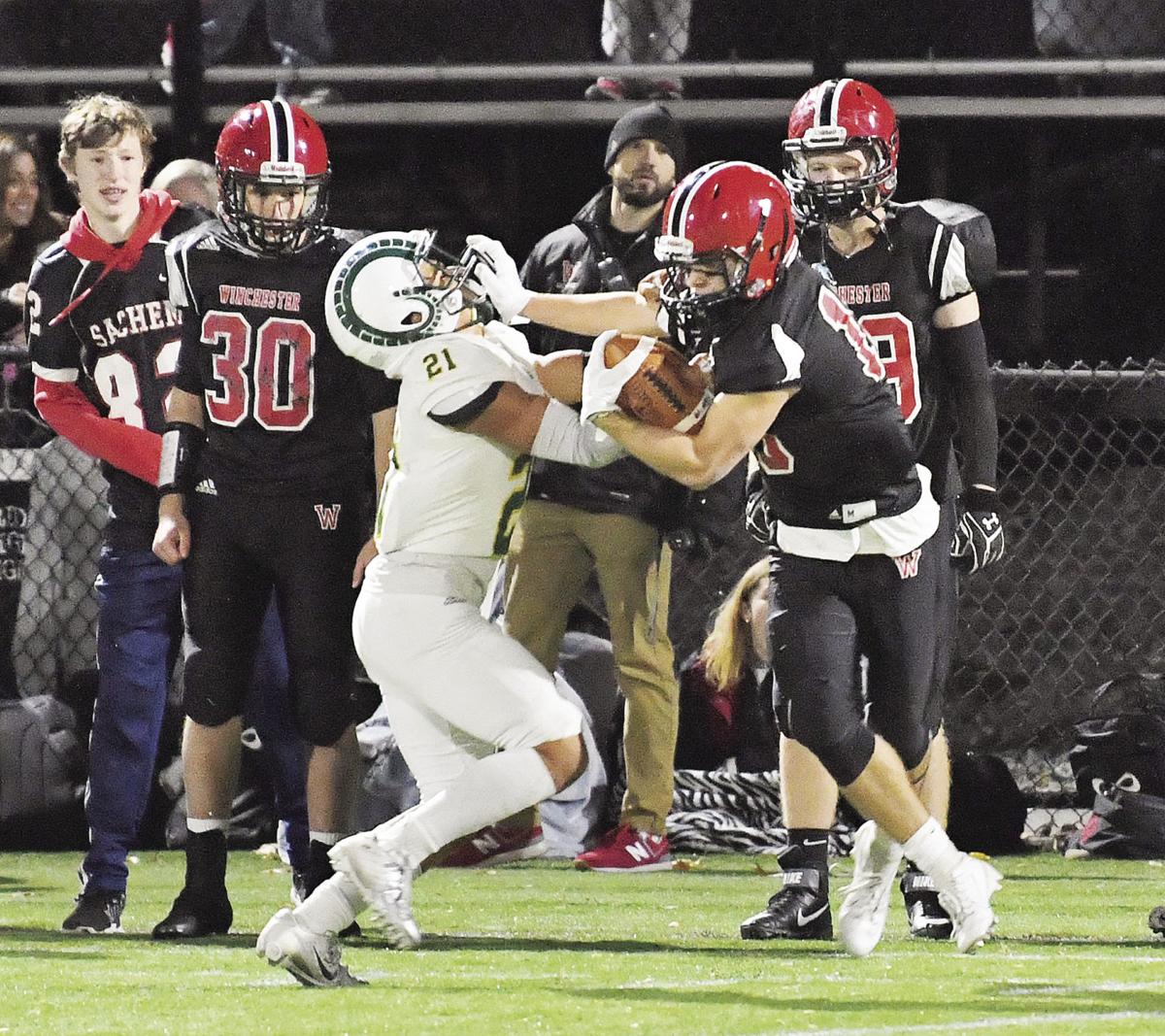 WINCHESTER’S HENRY KRAFT stiff arms a Lynn Classical defender during action from Friday’s playoff game at Knowlton Stadium. The Sachems went on to a 28-22 win. 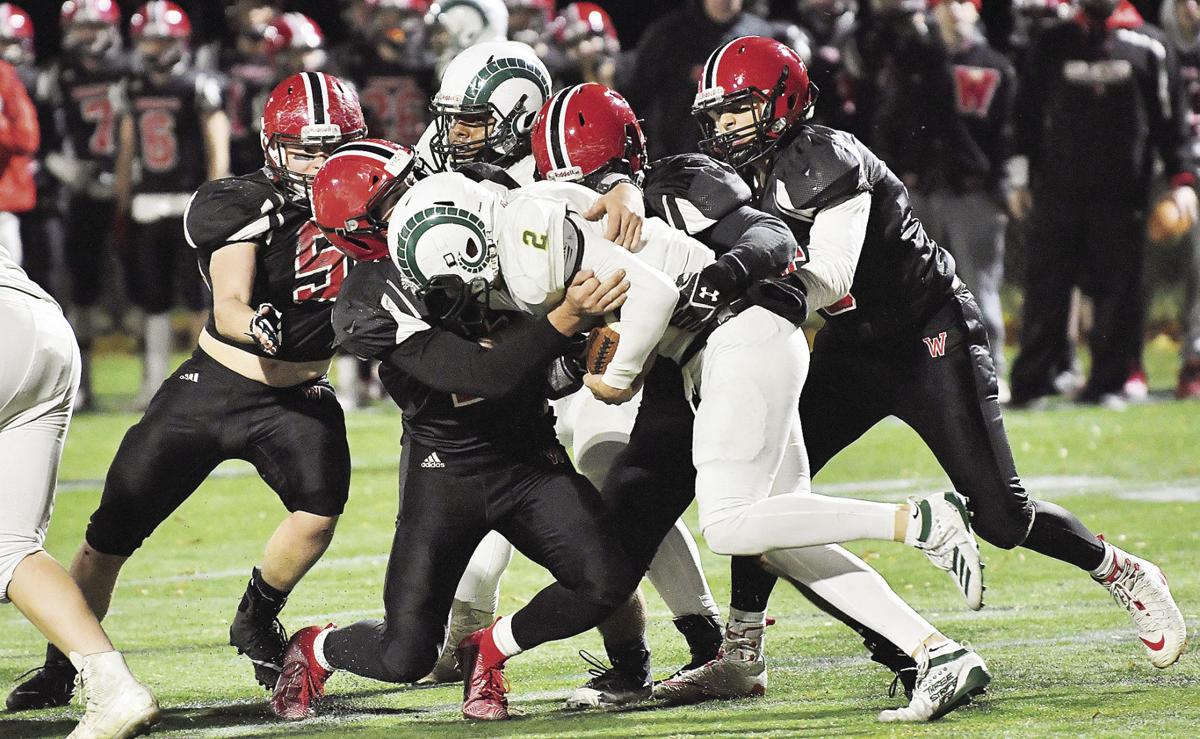 The Winchester defense gangs up to tackle Lynn Classical running back Danny Gisonno on this play from Friday night’s playoff game.

WINCHESTER’S HENRY KRAFT stiff arms a Lynn Classical defender during action from Friday’s playoff game at Knowlton Stadium. The Sachems went on to a 28-22 win.

The Winchester defense gangs up to tackle Lynn Classical running back Danny Gisonno on this play from Friday night’s playoff game.

WINCHESTER — The best Winchester High football team since the turn of the century keeps on winning, and its victories keep getting more significant.

The fourth-seeded Sachems put together their best all-around effort of the season, Friday night at Knowlton Stadium, while outlasting fifth seed, Lynn Classical, 28-22, in the first round of the MIAA Div. 3 North playoffs.

Winchester quarterback/linebacker Tommy Degnan led the way for Winchester with 209 yards of total offense on one side of the ball, and a part of 13 tackles and two interceptions on the other.

Sachems running back Jimmy Gibbons rushed for 108 yards on 18 carries and three touchdowns, including a 34-yard run to the end zone, early in the fourth quarter, that proved to be the winning touchdown.

“The kids were talking about it all week,” said Winchester coach Wally Dembowski, of getting the school’s first-ever win in the modern playoff format. “It’s a lot of fun. For me, I’ll enjoy it tonight a little bit, but then it’s on to Danvers.”

The Falcons defeated Belmont, 41-7, Friday night, and will host the Sachems in the Div. 3 North semifinals, this Friday night at 7 p.m.

“I told these guys, ‘This feels good, so let’s not lose this feeling, and let's get ready,’” said Dembowski. “We’ll come back in on Sunday and get ready for Danvers. It’s going to be a battle.”

No one was sure what to expect from Winchester, with its poor track record in the playoff format, and the Sachems were challenged right off the bat as the Rams drove down the field and scored a touchdown on their initial possession of the game.

Degnan and Winchester answered with authority. On the first play from scrimmage, Degnan faked a handoff and went around right end and into the secondary, breaking tackles and avoiding tackles on his way to a 59-yard run down to the Lynn Classical 9.

On the next play, Gibbons took the handoff and went around the left side and on into the end zone. Mario Caloiero completed the two-play, 68-yard drive with a successful conversion kick to give the Sachems a 7-6 lead, with 6:04 left in the quarter.

Lynn Classical also scored on a 68-yard drive, but on the second drive, Winchester’s defense made adjustments that caused it to go three-and-out, helped by an illegal procedure penalty.

The Sachems punted on their next possession and the Rams started their third possession at their 15, in the last minute of the first quarter.

Lynn Classical continued to be sparked by the play of its quarterback, co-captain Danny Gisonno (19-109), His first two carries accounted for 21 yards and a first down. Degnan and defensive tackle Aria Manfred got to him for a sack, two plays later, but Gisonno responded to third-and-22 with a 46-yard completion deep down the middle to wide receiver Maurice Sequiera to the Winchester 23.

Gisonno picked up another first down with a 10-yard run on third and nine before the drive was thwarted by Degnan’s first interception, which came on a pass that should not have been thrown.

But on the first play of the Sachems’ next drive, the running back took the handoff and appeared to be in option mode going around right end, He did not pitch the ball but failed to secure it in time as he got hit on each side, forcing him to lose the ball. Lynn Classical came up with it at the 17 and was back in business.

After Gisonno gained eight yards on first down, running back Kalvin So picked up six yards on two carries before Gisonno scored his second touchdown. The Rams went for two but the pass failed, leaving it a 12-7 in favor of Lynn Classical.

Winchester came up with its second two-play scoring drive to answer back, right away, this one for 65 yards. Degnan hit wide receiver Patrick Ross with a perfect pass down the right side on a go pattern. Ross pulled in the pass in stride before getting hauled down at the Ram 7 for a 58-yard reception. Gibbons took the handoff and went over left tackle for seven yards and a touchdown. The Sachems lined up for the kick but holder Jakob Flores came up out his crouch, rolled to the right, and hit co-captain Michael Sirignano with a pass and a 15-12 Sachem lead with 5:29 left before halftime.

Lynn Classical tied the game at 15-15 with 2:54 left on a 35-yard field goal by Kyle Durant, leaving enough time on the clock for one more Winchester possession.

Starting at their 38 following a 21-yard return by Henry Kraft, the Sachems got a 21-yard run around left end from Derek Gianci, followed by a 19-yard run from Gibbons down to the Ram 22.

Degnan gained 11 yards on the next play before Winchester faced a fourth and goal at the 7. Degnan rolled to his right and threw a dart to Kraft at the 2. He turned and got over the goal line just in time to give the Sachems a 22-15 lead at the half.

“Our quarterback said tonight, ‘We’re going to win this thing,’ at halftime, ‘we’re not going to lose,’” said Winchester coach Wally Dembowski, of Degnan. “We played well, we moved the ball.”

After a scoreless third quarter that featured a goal line stand for the Lynn Classical defense, the Sachems completed a nine-play, 67-yard drive on the fourth play of the final quarter to take a 28-15 lead.

A 16-yard completion to Kraft got the drive going before a combination of running from Gibbons and Degnan brought about a first down at the Lynn Classical 34. On second and 10, Gibbons went over the left side of the line and broke into the secondary for his third touchdown of the contest

“I’ll give props to the O-line guys,” said Dembowski. “They are the hardest working group. There are four brand new starters in that group. The left guard was a strong safety last year and the left tackle hasn’t played until this year, and the right tackle is new to the game. He played last year as a freshman but we are cutting our teeth with each game.”

The Rams answered right back with a 60-yard touchdown, ignited by a 10-run by Durant to the 50. It was all Gisonno after that, as he picked up 25 yards on three carries and completed back-to-back passes to Sequiera for 4 and 13 yards. Lynn Classical changed things up with a handoff to So and he took it in from eight yards out. Durant’s extra point made it 28-22 with 8:11 left.

Winchester chewed up five minutes with its next drive before punting from the Ram 47. Lynn Classical started at its 20 and picked up one first down on a 21-yard pass to Andy De Leon on fourth down. A penalty created a second and 15, and that’s when Degnan came up with his second interception to put a bow on the historic win.

“He had a heck of game,” said Dembowski, of Degnan. “He just keeps battling. He’s a big, strong kid, just like their quarterback, and he made some plays. He said he’d like a couple passes back but, I tell you what, he played pretty well at linebacker. He made some nice throws and had some nice runs.”