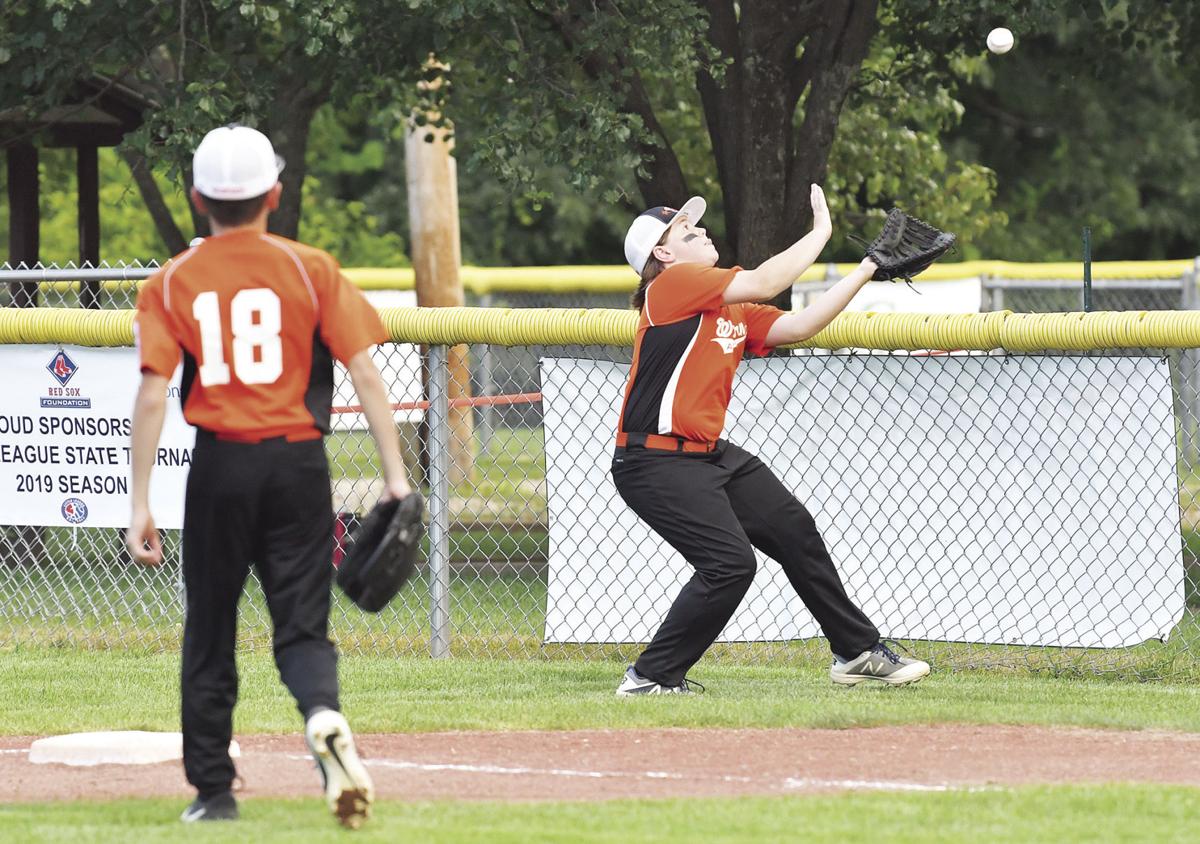 Woburn first baseman Jack Lee keeps an eye on a foul ball right along the fence during action from an earlier game in the Little League state tournament. Teammate Devin Farren (18) looks on. The Woburn 12-year-old All-Stars gave it a battle but fell short of their quest of advancing to the New England Regional which is the next step before Williamsport and the Little League World Series. 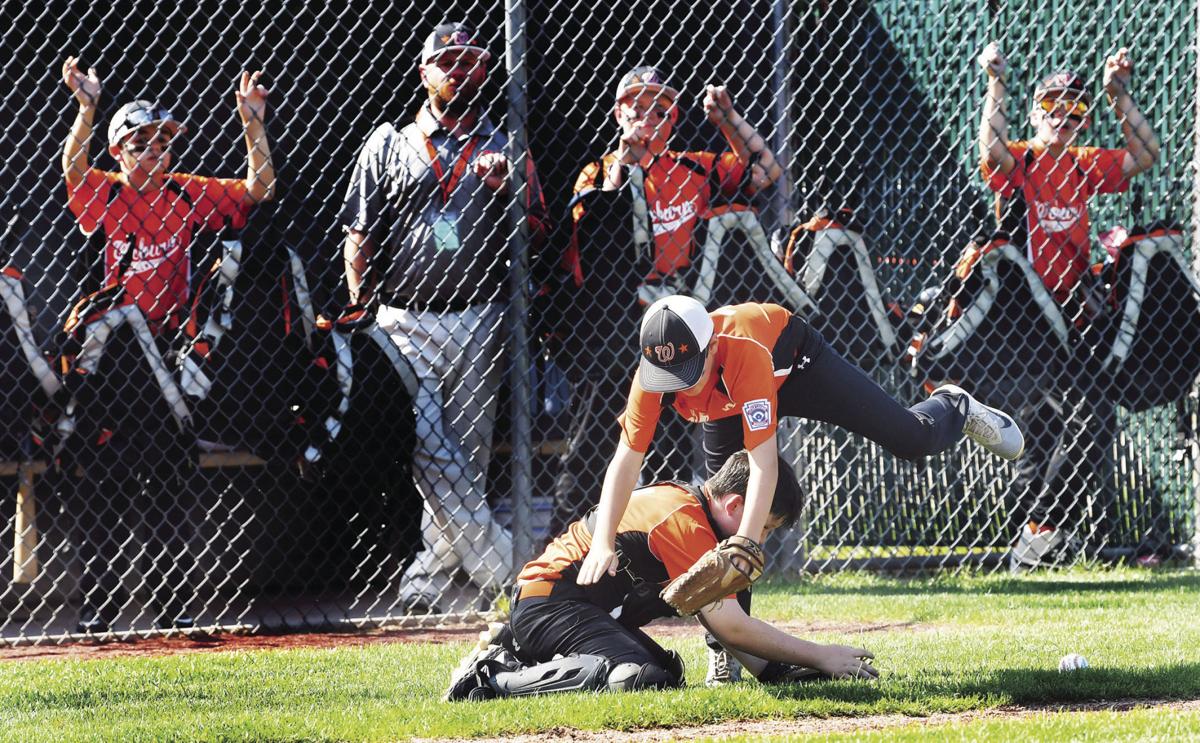 Woburn third baseman Jack McEleney dives over Woburn catcher Thomas Doherty to avoid a collision as they both pursue a foul ball up the third base line during last Thursday’s game.

Woburn first baseman Jack Lee keeps an eye on a foul ball right along the fence during action from an earlier game in the Little League state tournament. Teammate Devin Farren (18) looks on. The Woburn 12-year-old All-Stars gave it a battle but fell short of their quest of advancing to the New England Regional which is the next step before Williamsport and the Little League World Series.

Woburn third baseman Jack McEleney dives over Woburn catcher Thomas Doherty to avoid a collision as they both pursue a foul ball up the third base line during last Thursday’s game.

MIDDLEBORO — The amazing journey of the Woburn 12-year-old All-Stars came to an end, Saturday evening, with an 8-6 loss to Holden in the Massachusetts Little League state tournament which was held at the Field of Dreams Complex in Middleboro.

Woburn lost all three of its round-robin games, but was competitive in all three, but just not quite good enough to win in each instance. Woburn was making its first-ever appearance in the state finals and finished fourth in the state.

After Woburn lost to Braintree American, 6-2, Friday night, to fall to 0-2, it still had an outside shot at the final because its runs-allowed (8) was still pretty good in comparison to Holden (13), the team the Tanners would be playing on Saturday.

Holden and Walpole were both 1-1 and Braintree American (2-0) and Walpole would be meeting in the first game. Braintree had only allowed 4 runs in its first two games but still was not certain to be in.

But Walpole's 3-2 win over Braintree was close enough to send Walpole and Braintree to the finals on runs-allowed, eliminating both Holden and Woburn who were playing in the later game.

Walpole proved it was no fluke on Sunday as it earned the trip to the New England Regional with a 6-4 triumph in seven innings in the final.

“It was a once-in-a-lifetime experience, with a great group of kids and a great group of families, who were all 100 percent in on whatever we did for every game,” said Woburn coach Mike MacCutcheon. “These kids accomplished so much and I think there were so many lessons for them to learn playing on this stage: competing, learning to be resilient, and realizing you have to have a short memory for things positive and negative; and that your margin your margin for error isn’t what it is like when you are on a smaller stage.”

The players on both teams were loose at the start of this one and it resulted in lots of run production over the first four innings.

Holden took an initial 1-0 lead when Matt Bjorkman scored on a two-out single by Jamie Herlihy.

Woburn sent seven batters to the plate in the bottom of the first and got two runs to take a 2-1 lead.

Devin Farren led off with a double, and Matthew Toland followed with the first of his two-doubles to tie the game. Toland scored on a one-out sacrifice fly to give the Tanners the lead. Two-out walks to Luke Yorba and Dillon Dooley kept the inning going before starting pitcher Cooper LeBlanc got the third out.

Finn Murphy, making his first start of the tournament, gave his teammates a jolt of energy with a leadoff home run to left in the bottom of the second.

Holden answered with authority in the top of the third, batting around and scoring four runs to take a 5-3 lead. After loading the bases with no outs, Sam Perry scored on a LeBlanc sacrifice fly to make it a 3-2 game. Connor Keaney (2-for-3, 2 runs, 5 RBI) singled to drive in two runs and put Holden in front, 4-3. Keaney would score on a bases-loaded walk.

Holden added three more runs in the fourth to take an 8-3 lead. Jack Lee took over on the mound for Toland and he quickly retired the first two batters. A walk and an error kept the inning alive for Keaney, who hit a home run to left-center for three unearned runs.

But relief pitcher Bjorkman was highly effective, facing the minimum eight batters since entering the game with one out in the fourth. Murphy pitched two innings of scoreless relief to keep Woburn in the game to the end.

“The kids were excited to be playing another baseball game on a great field,” said MacCutcheon, of Saturday’s contest. “We wanted to put everything we had into that. We did and we just came up a little short. They made a few more plays than us, they got a few more timely hits and that’s the name of the game.”

In the Friday night game, Woburn was coming off a game where it did not hit the ball out of the infield against Walpole on Thursday, so it was encouraging when Matthew Toland flied out to left field in the bottom of the first.

Jack Lee then appeared to have an infield single when his hard ground ball had the second baseman sprawled out on the ground, only to see him flip the ball to first while he was still laying there.

Braintree American scored two runs in the top of the first as Jack McDonough and Matthew Taglieri scored on a one-out triple by Matthew Harvey. While trying to score on a wild pitch, Harvey was tagged out by Luke Yorba after taking the throw from catcher Thomas Doherty.

Woburn did not get its first hit until the fourth, when Lee hit what appeared to be a sure double to the fence in left-center. But a strong throw from the outfield to second base was in time to tag out Lee.

Braintree opened up some breathing room in the top of the fifth, scoring three times to take a 5-0 lead. Taglieri led off with a home run to center, Harvey was hit by a pitch and eventually scored on a wild pitch, and Tyler Moschella doubled and scored on a Matthew Rodgers sacrifice fly.

It was 6-0 in the bottom of the sixth when Woburn finally got its first runs of the tournament. Devin Farren singled, Toland was hit by a pitch, and Farren scored on a long single to deep right-center by Lee. Toland went to third and scored on a wild pitch.

Braintree took no chance and brought in the hard-throwing Taglieri, who struck out the final three batters of the game.

“I couldn’t have been more proud of them, I think any one of the three games we played could have gone either way,” said Mike MacCutcheon, after Saturday’s game. “Make a few more plays in the field, maybe one or two more timely hits and we are 2-1 and going to the final and playing for the state championship (Sunday), but that’s baseball.”