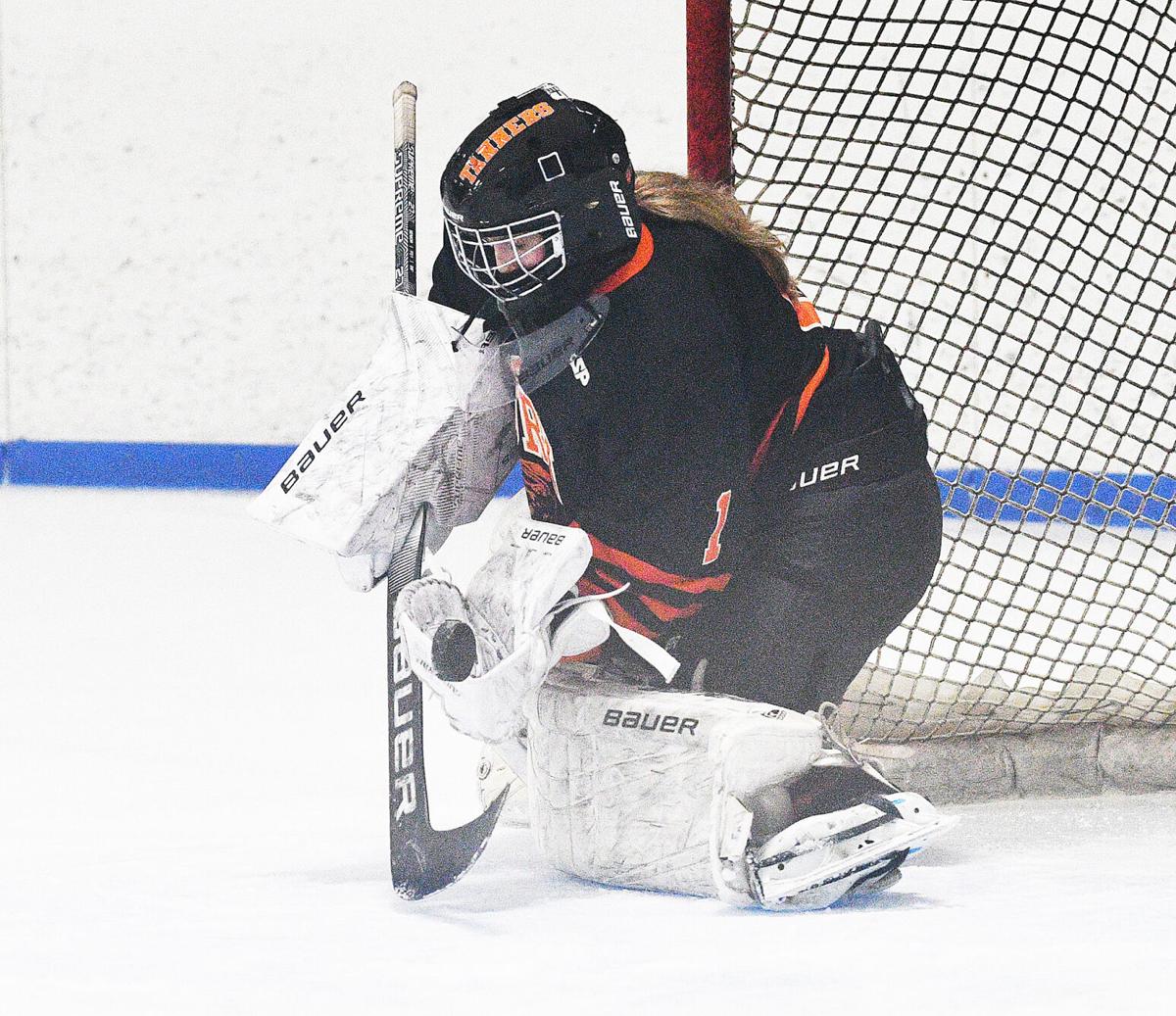 WOBURN GOALIE ALYSSA WACKROW makes one of her 10 saves in recording the shutout during the Middlesex League playoff final against Arlington on Saturday at Stoneham Arena.

Woburn's Lily Anderson gets past an Arlington player during the Middlesex League girls hockey playoff final at Stoneham Arena.

THE WOBURN HIGH GIRLS HOCKEY TEAM won the Middlesex League playoff championship with a 2-0 win over Arlington in the finals on Saturday at Stoneham Arena. The Tanners had tied and lost to the Spy Ponders during the regular season. Woburn finishes with a 10-1-2 record.

WOBURN GOALIE ALYSSA WACKROW makes one of her 10 saves in recording the shutout during the Middlesex League playoff final against Arlington on Saturday at Stoneham Arena.

Woburn's Lily Anderson gets past an Arlington player during the Middlesex League girls hockey playoff final at Stoneham Arena.

THE WOBURN HIGH GIRLS HOCKEY TEAM won the Middlesex League playoff championship with a 2-0 win over Arlington in the finals on Saturday at Stoneham Arena. The Tanners had tied and lost to the Spy Ponders during the regular season. Woburn finishes with a 10-1-2 record.

STONEHAM — Four of the last five years, the Woburn High girls' hockey team has concluded its season as tournament champions, which is a remarkable run.

The first two were MIAA Div. 1 state championships won at the TD Garden, the third came last year when the Tanners and Austin Prep Cougars were declared co-champions at the start of the pandemic, and then this year.

Woburn was grateful just to get on the ice this year, and the Tanners were extremely happy to conclude the season by capturing the Middlesex League tournament title with a 2-0 victory over Arlington, avenging their only loss of the season, at Stoneham Arena.

Woburn (10-1-2) was able to continue its pattern from throughout the tournament in scoring early, and then was able to contain Spy Ponder star, sophomore Maddie Krepelka, who burned the Tanners for three goals in the loss.

Centers Bella Shaw and Madelyn Soderquist were given the additional assignment of shadowing Krepelka, and the strategy proved to be highly effective.

"The last time we played Arlington she had (two) goals in the last (four) minutes of the game," said Woburn coach Steve Kennedy. "She's an incredible player, talented and determined, it took a team effort to shut her down. Maddie and Bella did an admirable job, they were so determined and persistent in their responsibility."

Mackenzie Russo scored on the first shot of the game, about 90 seconds in, on a wrist shot from the left circle, high into the right side of the net.

"In the last three games we've scored very quickly," said Kennedy. "When you start that way, you feel great, and then you hope the kids don't think it's over. They showed tonight that they didn't, that they knew they had to play from start to finish."

Arlington had plenty of possession in the first half, as did Woburn, but neither team had any more glittering opportunities to score. Aly Haggerty got a decent look in the slot, towards the end of the half, but goalie Elise Rodd came up with the glove save.

"The senior line of Kelsey Ficociello, Bella Shaw and Aly Haggerty were so good tonight," said Kennedy. "We needed them to be at their best and they were; possessing the puck and playing lock down defense all night."

As the game progressed, it became clear the officials were going to let the girls play and settle this on their own, as there were no penalties called the entire game.

Both teams got a little more physical in the second half, but not out of hand. Woburn, which held Arlington to four shots on net in the first half, continued to focus on protecting the 1-0 lead. The Spy Ponders had many shots, but the majority of them either went wide of the target or were blocked by one of the many defenders in front of the net.

"Lily Anderson led the way on defense, she was everywhere out on the ice tonight," said Kennedy. "Meaghan Keough was solid and Taylor Buckley was an absolute force, as she has been all season."

The Tanners did have some chances to add an insurance goal during the course of the second half. But, one Russo shot, and one Soderquist backhand, went over the net, and Rodd made a couple saves on other Russo chances.

"Up front, Kenzie once again provided the offensive spark; she had five goals in the last two games of the season," said Kennedy. "ML Pineros and Maddie Soderquist played terrific two-way hockey all game and were so tough in the defensive half."

As time wound down under a minute, a save by Woburn goalie Alyssa Wackrow (10 saves) turned into a possession for Russo at the Tanner blue line, in front of the Woburn bench. Russo spun around, checked out the target and then sent a shot down the ice and into the empty net for the 2-0 final.

"I just can't say enough how proud I am of this team," said Kennedy. "Under incredibly difficult circumstances they persevered, stuck together and once again took the season as far as it was possible to go. All year, the seniors have been tremendous and tonight was just a paramount effort."