REMAINING FRIENDS — Steve Palladino (left) and Pete Moscariello (right) still make it a point to get together and take in a Boston Red Sox game. The pair remain linked through Reading High baseball from 40 years ago where Palladino was the team manager for coach Moscariello’s first Middlesex League champions. 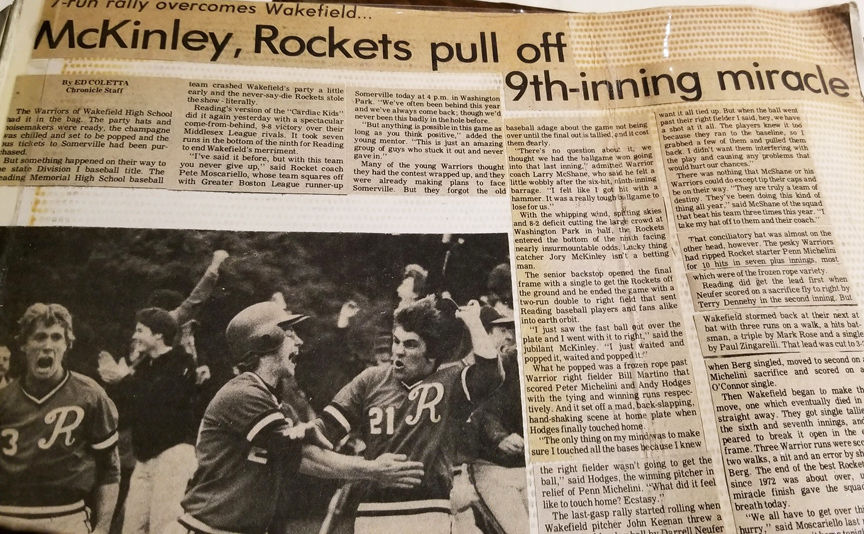 The headline from the Daily Times Chronicle of Reading's "miracle" win in the Division 1 EMass tourney. 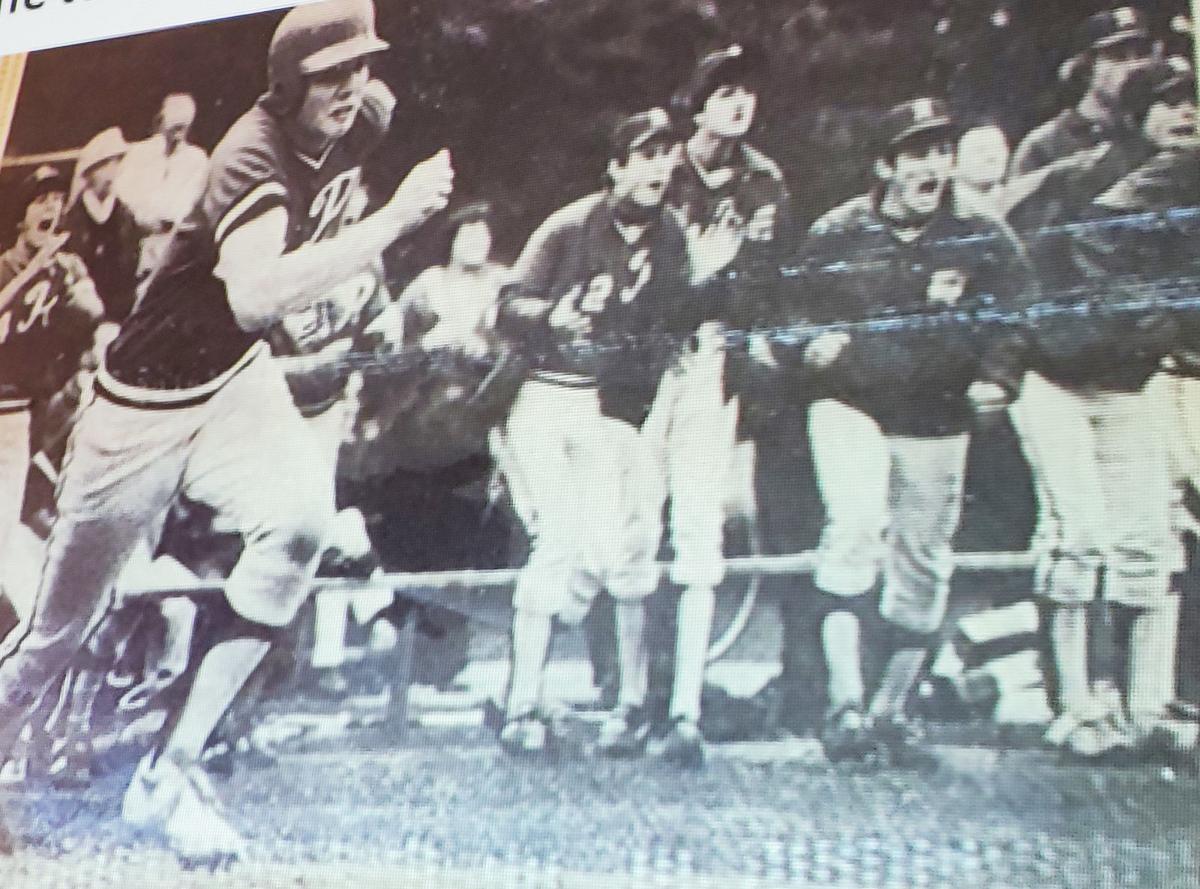 REMAINING FRIENDS — Steve Palladino (left) and Pete Moscariello (right) still make it a point to get together and take in a Boston Red Sox game. The pair remain linked through Reading High baseball from 40 years ago where Palladino was the team manager for coach Moscariello’s first Middlesex League champions.

The headline from the Daily Times Chronicle of Reading's "miracle" win in the Division 1 EMass tourney.

(Our “Throwback Thursday” series looks back at the Reading-Wakefield baseball tournament game of June 9, 1980 with a first-hand account from Steve Palladino, team manager, who was celebrating his 16th birthday that day.)

Birthday surprises can certainly create memories that will last a lifetime. And that is exactly what happened to me on June 9, 1980 — my 16th birthday.

On that day I had the opportunity to share my birthday with 21 of my closest friends and we invited an entire town to the party — a party that no expert party planner could organize the details for, but a party that we are still celebrating to this day.

The party was held at Washington Park in Reading, the home field for the Middlesex League champion Reading Rocket baseball team.

Truth be told, we weren’t there to celebrate my birthday. But the coincidence is something that I have treasured for the last 40 years and will remember for the next 40 as well.

I was the team manager for head coach Pete Moscariello and his first Middlesex League championship team. At 17-3, we earned the second seed in the Division 1 Eastern Mass State tourney and the right to open, at home, vs. league rival Wakefield.

For 8½ innings, no one was in a celebratory mood. (Those were the days when tourney baseball games were nine innings.) But down 8-2 entering the last of the ninth, we exploded for seven runs to snap victory out of the jaws of defeat and celebrated a thrilling 9-8 win.

The entire season was a dream for me. I wasn’t an athlete so I knew my baseball playing days were left on the little league fields of Reading. But I loved the game and coach Moscariello gave me the opportunity to be part of something special.

My memory of that miracle 9th inning is me standing and sitting (I was restless in that final inning) in my normal spot at the end of the bench, closest to home plate. We had the third base bench at Washington Park and I started the inning by saying “OK, if Jory (McKinley) can get on maybe we can get something going.”

McKinley did start the inning with a single. Following a critical error, we suddenly had two on with no outs. Then following an out, consecutive hits by Larry Berg, Pete Michelini (two-run single) and Bill Tompkins cut the deficit to three, at 8-5.

A walk to Dick O’Connor, a single by Mark O’Brien and Andy Hodges hitting into a fielder’s choice cut the deficit to one as Jory came up again with runners on the corners.

Jory lined a shot to right field that I was afraid might curve too far and land in foul territory. It didn’t, and I can still see that ball hugging the right field line. I had a great angle from my location and I kept saying “stay fair, stay fair.”

It did and we tied the game.

And as I watched pinch runner Bob Macaluso score — I said “we can win this game — run Andy, run” — as I watched Andy Hodges make the dash from first base to home to win the game.

The win set off a wild celebration as fans and the team united in victory.

I remember when it was over, going over to Lanai Island in Wakefield for my birthday dinner with my parents and my brother, Rich.

Prior to the ninth inning explosion, it didn’t look like it was going to be a very happy birthday and it looked like everyone was going home from this party on the sad side.

Wakefield erased our early 1-0 lead with three in the third. After we cut the deficit to one (3-2) with a run in the fifth, Wakefield all but put the game away with single runs in the sixth and seventh before adding three more in the eighth inning.

But my teammates weren’t about to let me have any sadness on this birthday as we rallied and punched our ticket to the next round of the playoffs where we routed Somerville, 19-10, with an 18-hit onslaught.

The dream of a state title ended two days later with a tough 2-1 loss to Milton, at Brandeis University.

In the 40 years that has passed since that time, I have been blessed with many wonderful sports memories. My wife, Maureen, and I have watched our three children compete in three different high school sports: Kevin, in baseball; Kyle in track; and Kaylee, in hockey.

I have done the dad little league coaching job and enjoyed each moment.

But my first great personal sports moment came from that win on June 9, 1980. Being part of that team was so special and important to me. I wasn’t an athlete in high school but I loved sports and coach Moscariello and my teammates gave me the opportunity to be part of something special.

The memory of that special time gained even more meaning for me as I watched my son, Kevin and his North Andover High School baseball teammates compete against Reading High in the state tourney, in 2010. Reading defeated North Andover, 8-7.

What a moment to watch my son be on the same field as my high school coach.

Coach Moscariello keeps this and many other memories alive through the Reading Alumni baseball club. Each January, we meet for our annual alumni dinner. We could do it monthly and never run out of stories.

This year’s alumni dinner, held at Dos Lobos in North Reading, was special as we honored the team from 1980 along with coach Moscariello’s teams from 1990, 2000 and 2010.

The 1980 team stole the spotlight on this night as they were represented by 13 members of the 21 team members.

The other day, second baseman Mark O’Brien sent me the schedule from that season with the results, hand-written for each game.

Forty years later, we are still talking about this wonderful memory.

What a special birthday present it was — and still is — for me.