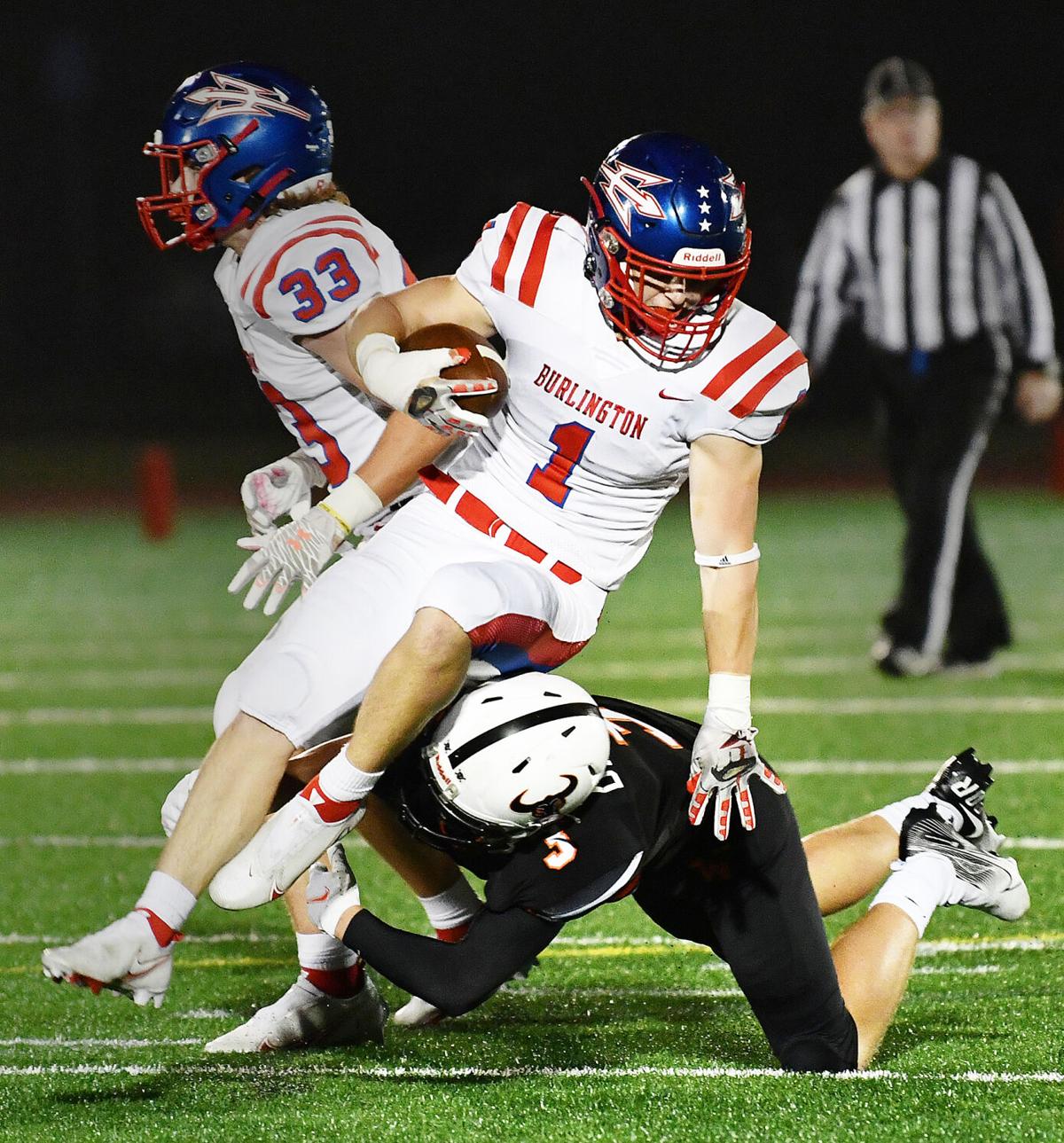 WOBURN’S DEREK DABRIEO makes a diving tackle on Burlington receiver Sam Doherty after a catch during Friday’s game at Woburn High. The Tanners won their second straight with a convincing 50-14 win over the Red Devils. 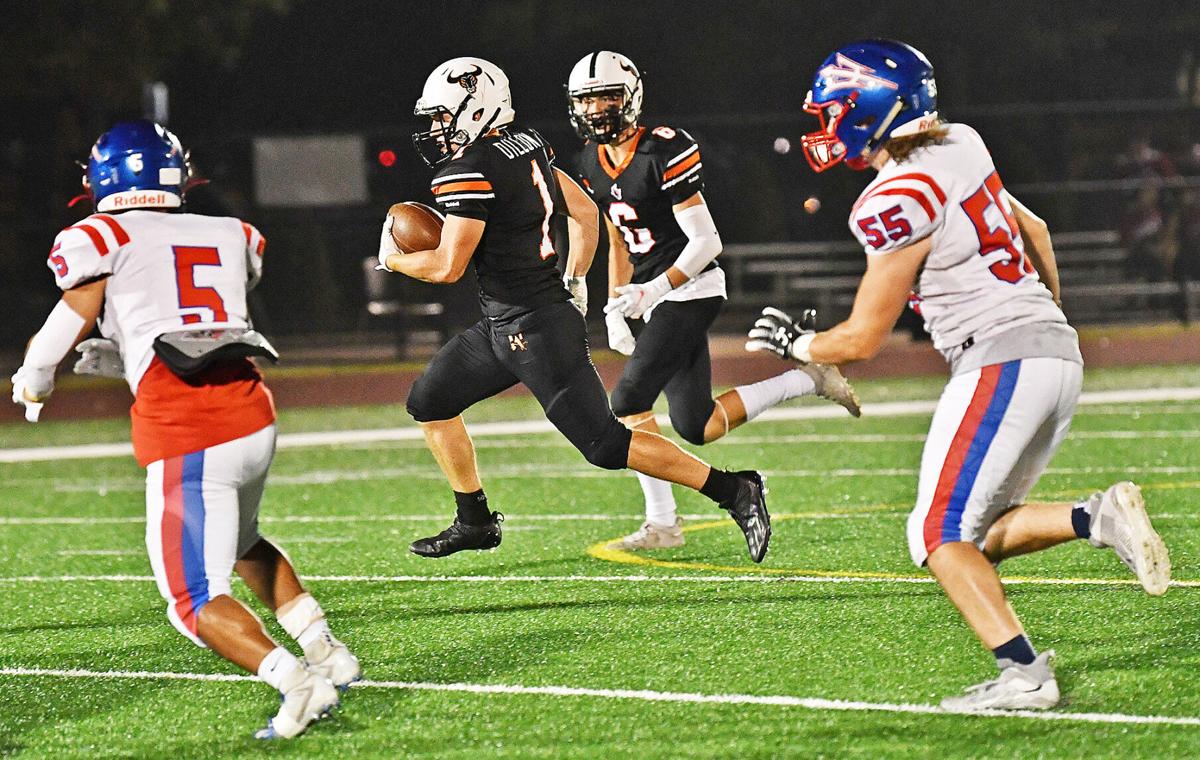 Woburn's Liam Dillon intercepted this pass and returned it 55 yards for a touchdown during the first quarter of Friday's game against Burlington. Dillon picked off three passes in the game to become the fifth Woburn High player to accomplish that and first since 1997.

WOBURN’S DEREK DABRIEO makes a diving tackle on Burlington receiver Sam Doherty after a catch during Friday’s game at Woburn High. The Tanners won their second straight with a convincing 50-14 win over the Red Devils.

Woburn's Liam Dillon intercepted this pass and returned it 55 yards for a touchdown during the first quarter of Friday's game against Burlington. Dillon picked off three passes in the game to become the fifth Woburn High player to accomplish that and first since 1997.

WOBURN — The ability of the Woburn High football team to both run the ball and play more physical up front played a big role in its season-opening win last week.

In Week 2, the Tanners used that same formula to effectively build a huge lead in the first half and essentially put the decision away by halftime.

Woburn rushed for nearly 300 yards and five touchdowns. The Tanners also threw for another and defensively ran back an interception for six more points, which helped the Tanners cruise to a 50-14 victory over Burlington, in a game played at Woburn High on Friday night.

The Tanners’ offense was led by sophomore running back Brian Ferreira who had 186 rushing yards on 20 carries and two TDs. Through the air Woburn junior quarterback Brett Tuzzolo threw just two passes but completed both tosses, including a touchdown toss to Derek Dabrieo, and help improve Woburn’s record to 2-0. It’s Woburn’s first 2-0 start to a season since 2014.

“We had an unbelievable week of practice and were ready to go, and while (Brian) Ferreira had a great game it wasn’t just him,” said Woburn coach Jack Belcher. “(Brett) Tuzzolo, (Jake) Daniell, and (Anthony) Travers all had some good runs, while the guys up front did a great job opening up holes for them.”

But the Tanners’ defense also played a big role to help build a 29-point lead by halftime. Woburn picked off five passes, three by Liam Dillon, who returned one for a score, while Travers and Andrew Taft picked off one pass each.

Dillon became the fifth player in Woburn history with three picks in a game, and the first since Mark Selvitella in 1997 against Stoneham.

While Burlington quarterback Ronan Noke completed 10 of 22 passes for 149 passing yards and two touchdown tosses, the Red Devils were held to negative rushing yards until the fourth quarter, which dropped Burlington’s record to 0-2.

“Woburn played more physical than we did, and their offensive line pushed us and we couldn’t stop their run,” said Burlington coach Dan MacKay. “Woburn’s defensive line pressured us, and Ronan (Noke) was throwing the ball up there, and we had guys open but he had a tough time getting it to them.”

After several short runs moved the ball to the Burlington 10, Tuzzolo plowed straight up the middle on a quarterback keeper. The Woburn front line literally pushed Tuzzolo all the way to the end zone for the score. Marc Cutone made the first of his six extra-point kicks to give Woburn an early 7-0 lead.

On the third play of Burlington’s next possession Ronan Noke threw a pass toward the left sideline that Dillon picked off at the Woburn 45. He then darted to the right sideline and ran it back 55 yards downfield for the score. Ferreira rushed the two-point conversion into the end zone to extend Woburn’s lead to 15-0.

“Liam (Dillon) had a really good summer, and he played more in practice last week and he’s a really good player,” said Belcher. “This was just his second varsity game and he’s off to a good start. He tackled well tonight besides the three interceptions, and I know he’s going to continue to get better and better.”

The Red Devils finally showed a sign of life. On the first play of their next possession from their own 38, Ronan Noke threw another pass toward the left sideline that teammate Sam Doherty caught, and took it 62 yards to the end zone for the score. Josh Pupa’s extra-point kick cut Burlington’s deficit to 15-7.

But it took the Tanners just two plays to respond. After a short run by Ferreira moved the ball to the Woburn 46, Tuzzolo completed a pass toward the right sideline to Dabrieo, who took it 54 yards for the score. Cutone’s kick increased Woburn’s lead to 22-7 with still three minutes left in the first quarter.

The Red Devils started their next possession on their own 35 and launched a 10-play, 65-yard scoring drive. But while Noke completed three passes to move the ball to the Woburn five, Doherty was hurt on his nine-yard catch and had to leave the game for good, leaving the Red Devils with a void on both sides of the ball.

Noke did cap the drive with a five-yard touchdown pass to his brother Aidan on the first play of the second quarter, which along with Pupa’s extra-point kick cut Burlington’s deficit to 22-14. Both without Doherty the Red Devils were at a big disadvantage, and the Tanners responded with three more first-half scores.

Woburn started its next time with the ball on its own 37 and used just five plays to go 63 yards for a score. It all started by a 19-yard run and capped by a 29-yard burst by Ferreira to the end zone, to extend the Tanners’ lead to 29-14.

After Burlington’s next possession ended when Travers intercepted a Ronan Noke pass at the Red Devils 36, the Tanners used short runs to go 62 yards on just six plays. Tuzzolo finished the drive with a three-yard keeper into the end zone to push Woburn’s lead to 36-14.

After Taft picked off a pass by Ronan Noke on Burlington’s second play of its next possession at the Woburn 38, the Tanners again went to their ground game to go 62 yards on five plays. Ferreira ended the drive with a three-yard run in the final minute of the first half, to extend Woburn’s lead to 43-14 by halftime.

While Burlington’s defense did stop a potential seventh Woburn touchdown on its own two-yard line, then later recovered a fumble off its own punt, the Red Devils just couldn’t get any offense going. Another pass by Ronan Noke was picked off by Dillon, his second of the game, to give Woburn the ball on the Burlington 31.

“Our offensive line had a tough time blocking Woburn’s defensive line, and as a result we couldn’t get anything going with our running game,” said MacKay. “Woburn’s line out-played us and played more physical up front. We had some looks on offense but we dropped some passes and sputtered running the ball.”

The Tanners then went 31 yards on just five plays, capped by a three-yard scoring run by Daniell in the final minute of the third quarter, to extend Woburn’s lead to 50-14 and cap the game’s scoring. The teams played through a scoreless fourth quarter with running time to finish out the contest.

“When Burlington moved the ball the first time with those quick screens we made some adjustments on defense and shut that down,” said Belcher. “Our defensive line tipped some passes, our linebackers (Mike) Doherty and (Logan) Hallisey played well, and our defensive backs including (Derek) Dabrieo tackled well.”

Burlington next plays on Friday when it meets Belmont at Harris Field (6 p.m.), while Woburn is off until Friday, Oct. 1 at Arlington (7 p.m.).