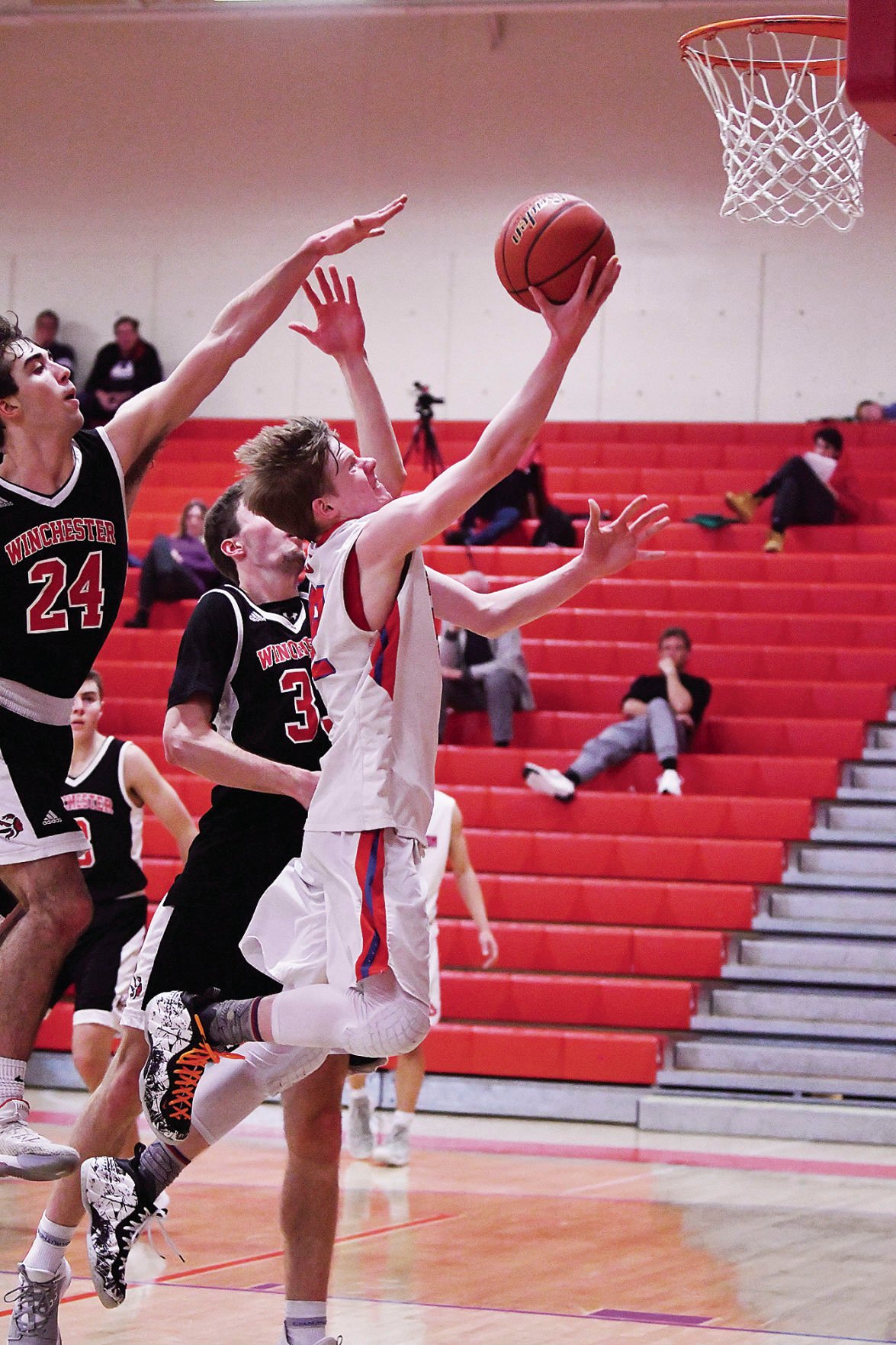 Burlington's Kyle Inglis looks to make the layup under pressure from Winchester's Liam Campbell (left) and Gus Kraft (right) during action from Tuesday’s boys basketball game in Burlington. The Red Devils rallied back from 16 points down to overtake the Sachems, 67-62, and improve to 8-1 overall on the season. 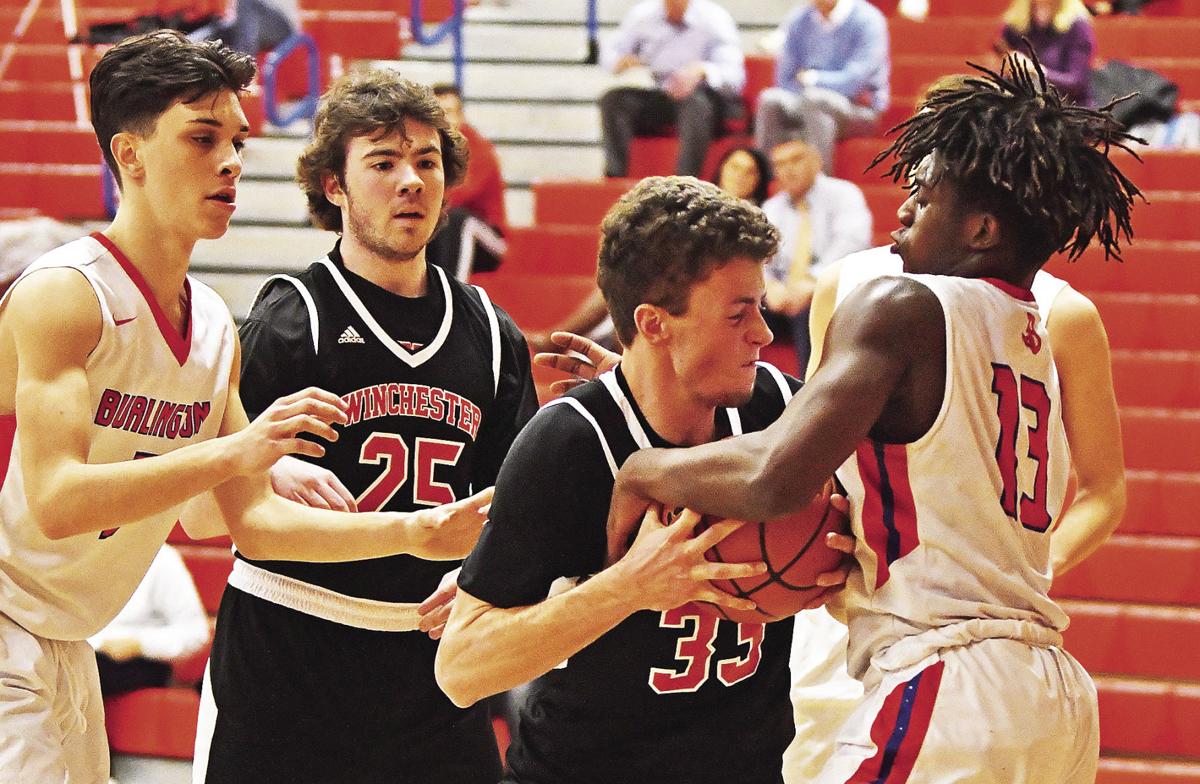 Burlington's Aidan Olivier (right) battles for the ball with Winchester Gus Kraft (33) with Winchester's Andrew Murray (25) and Burlington's Justin Barros. The Red Devils rallied back from 16 points down to overtake the Sachems, 67-62.

Burlington's Kyle Inglis looks to make the layup under pressure from Winchester's Liam Campbell (left) and Gus Kraft (right) during action from Tuesday’s boys basketball game in Burlington. The Red Devils rallied back from 16 points down to overtake the Sachems, 67-62, and improve to 8-1 overall on the season.

Burlington's Aidan Olivier (right) battles for the ball with Winchester Gus Kraft (33) with Winchester's Andrew Murray (25) and Burlington's Justin Barros. The Red Devils rallied back from 16 points down to overtake the Sachems, 67-62.

BURLINGTON — Just when it appeared the Burlington High boys basketball team had met its match against a league foe, the Red Devils used some incredible outside shooting along to still come out on top.

Down 16 points early in the third quarter, Burlington rallied back by hitting six 3-pointers just in that quarter, then continued to surge enough in the fourth quarter, to come away with a come-from-behind 67-62 victory over Winchester, at Vanella Gym on Tuesday.

The Red Devils hit 12 threes and placed four starters in double-figures, led by the stellar shooting of sophomore Aidan Olivier, who hit three 3-pointers to lead all scorers with 18 points. Kyle Inglis added 14 points, and both Tyler Williams (four threes) and Mike Melanson chipped in 12 points, and help keep Burlington in first place in the Freedom Division at 5-0 and improve its overall record to 8-1.

Burlington's main challenger in the Freedom Division appears to be Melrose (5-1, 3-1) and the Red Devils will host the Red Raiders on Friday at 5:30 p.m.

“Tyler Williams sparked us for sure by hitting a couple of threes in the third quarter,” said Burlington coach Phil Conners. “He also made some great defensive plays, and everyone else fed off of his play after that. Aidan (Olivier) had an amazing game, as he hit a couple of shots with the shot clock rung out that were really incredible.”

The Sachems played well enough offensively to win, as Liam Campbell led Winchester with 17 points, while Gus Kraft added 10 points, to help build a significant first-half lead. But the Sachems fell victim to some defensive breakdowns in the second half which contributed to losing their lead. As a result, Winchester couldn’t rally back in the final quarter and fell to 3-4 (2-3 ML).

“Burlington made a lot of shots, and we had some defensive letdowns which allowed them to make those shots,” said Winchester coach John Fleming. “Burlington hit six threes in the third quarter when we went from a nine-point halftime lead to a tie. We can’t have that against a good-shooting team like Burlington. We had some chances but we had too many missed opportunities.”

The Sachems got off to a good start when Campbell scored four points, Omar Shakeel added three points, and Phil Sughrue and Tommy Degnan both scored two points, to give Winchester a 14-7 lead halfway through the first quarter.

The Red Devils rallied back, to show a pretense of later things to come, late in the first quarter. Melanson scored four points, while Williams and Shane Mahoney both drained three’s, to key a 12-4 run that gave Burlington a one-point lead (19-18) by the end of the first quarter.

But the Sachems responded by controlling play for most of the second quarter, initially sparked by Campbell who hit two straight three’s, Quinten Pienaar, Sean Gogolin, and Degnan added two points each, to ignite a 13-2 run that gave Winchester a 10-point lead (31-21) halfway through the second quarter. Then the teams traded baskets for the rest of the half, which left Winchester up nine points (37-28) by halftime.

“We had an awful first half, and I felt we just didn’t have the same energy and that we could come in here and just win the game by showing up,” said Conners. “I warned our kids against that, but we can’t come back from 16 down and win without a high-character team, and our kids are really high-character kids.”

When Gus Kraft scored five points and Sughrue added two points to start the second half and extend Winchester’s lead to 16 points (44-28), it appeared the Sachems were cruising towards a convincing win.

But at that key juncture Williams suddenly hit two consecutive three’s, then Olivier hit both a three and a lay-in, to spark a huge 11-0 run that quickly cut Burlington’s deficit to just five points (44-39) halfway through the third quarter.

The Red Devils didn’t stop there, for after an exchange of baskets, Olivier continued his hot shooting by hitting two more shots including another three, while Melanson knocked down a trey as well, to help pull Burlington even (50-50) by the end of the third quarter, when Burlington outscored the Sachems 22-13.

After Gus Kraft and Campbell both scored to briefly give the Sachems a one-point lead (54-53), the Red Devils surged yet again when Olivier and Inglis both scored, and Mahoney drained a three, to key a 7-0 run that gave Burlington a six-point lead (60-54) with three minutes remaining.

“In the fourth quarter we started getting a little tentative offensively, and we got away from what we were doing,” said Fleming. “Burlington played great defense, but we didn’t stay with what we wanted to do offensively and missed shots that we usually make.”

After an exchange of baskets, a 3-pointer by Shakeel briefly cut Winchester’s deficit to three points (62-59) with two minutes left.

But the Sachems got no closer, as Olivier responded for the Red Devils by hitting another three with a minute left, and after a basket by Campbell, Inglis hit two foul shots with 21 seconds left to extend Burlington’s lead to 67-61, and Winchester never got within five pints the rest of the way.

“Kyle (Inglis) did a great job getting to the rim, and Mike Melanson hit a couple of big three’s as well,” said Conners. “This is a high-character team, and that really helped us to not quit when we were down, and come back and win this game.”

Despite the setback, Fleming still found a couple of bright spots for the Sachems.

“Both Liam (Campbell) and Gus (Kraft) played well for us offensively,” said Fleming. “But unfortunately we left some points on the table. We missed about seven close-range shots that we needed to hit against a team that shoots well.”