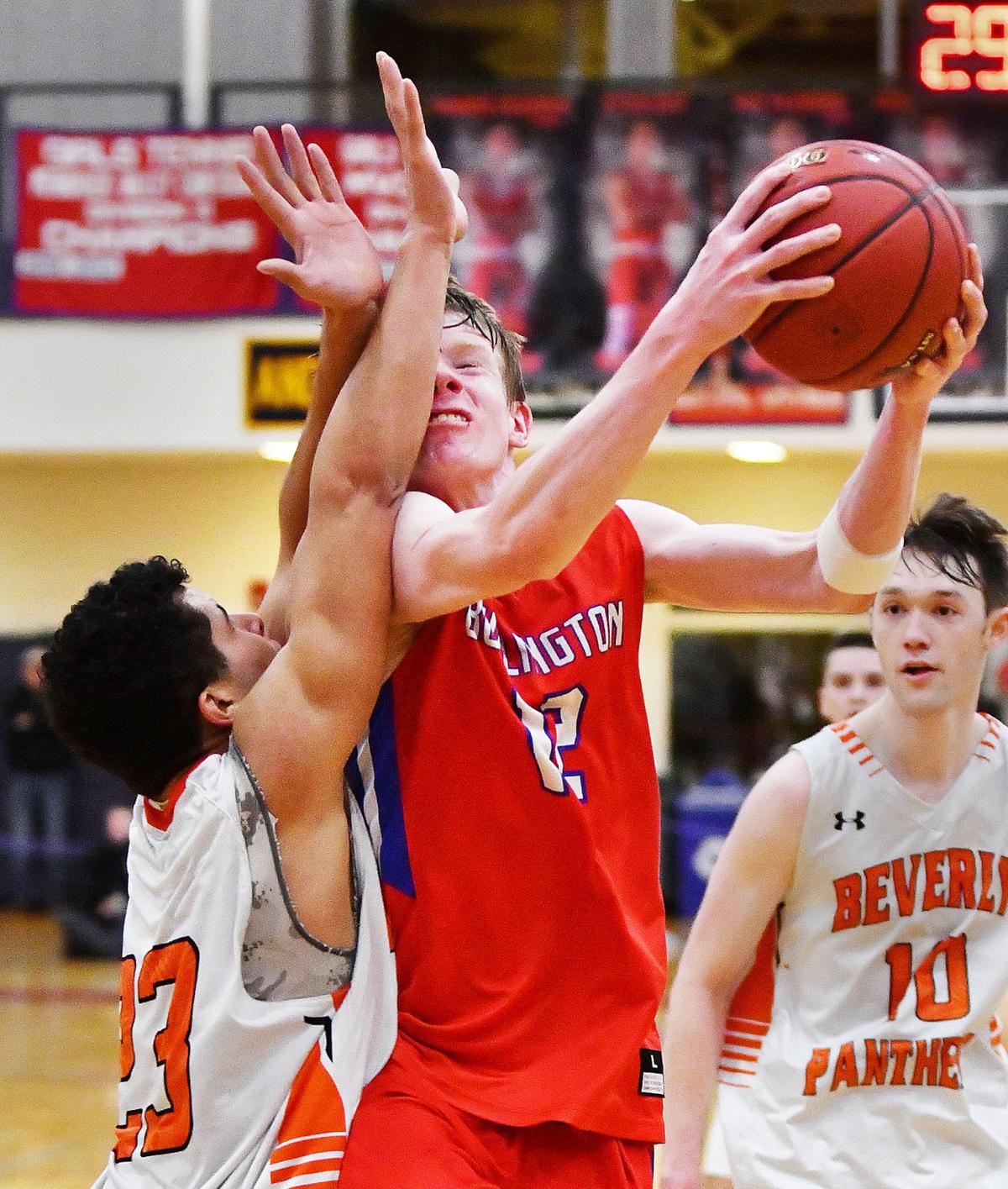 Burlington's Kyle Inglis gets hit by Beverly's Gabe Copeland late in the game. The action was intense throughout, but the Red Devils fell short in overtime, losing 67-60. Inglis led Burlington in scoring with 23 points in his final game as a senior. The Red Devils finished the season with an 18-5 record. 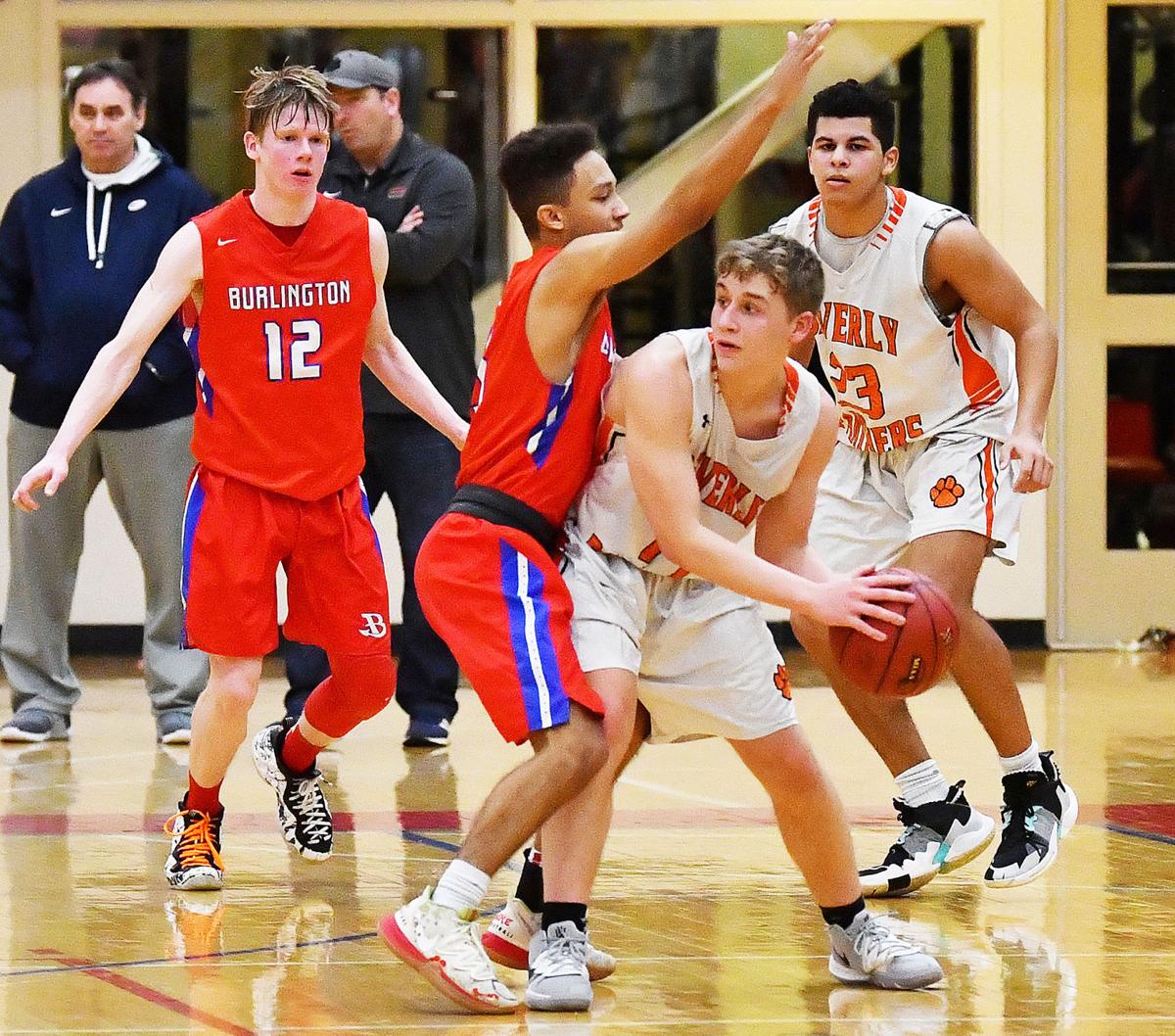 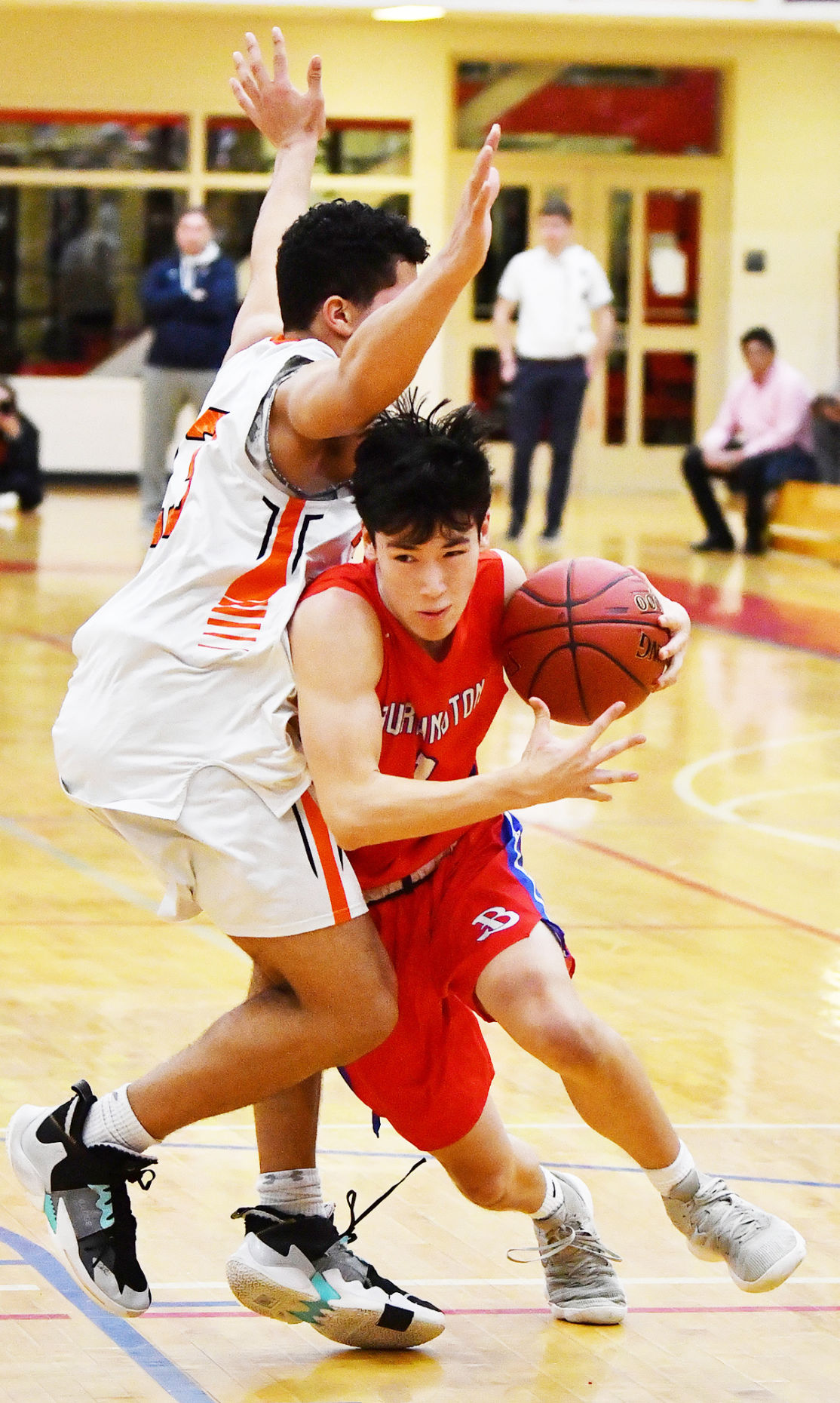 Burlington's Shane Mahoney gets past Beverly's Gabe Copeland and would make the bucket.

Burlington's Kyle Inglis gets hit by Beverly's Gabe Copeland late in the game. The action was intense throughout, but the Red Devils fell short in overtime, losing 67-60. Inglis led Burlington in scoring with 23 points in his final game as a senior. The Red Devils finished the season with an 18-5 record.

Burlington's Shane Mahoney gets past Beverly's Gabe Copeland and would make the bucket.

TEWKSBURY — After battling back from deficits the entire game, including a near miraculous comeback in the final minutes of the fourth quarter, the Burlington High boys’ basketball team ran out of gas in an overtime period.

The Red Devils rallied back from 11 points down late in the fourth quarter to force overtime, but never led thereafter. Instead top-seeded Beverly took the lead for good, and earned a 67-60 overtime victory over fourth-seeded Burlington, in a Division 2 North semifinal tournament game at Tewksbury High last night.

The winning rally came after neither team scored early in the OT, when Beverly’s Damian Bouras hit a 3-pointer with two minutes left. Then off a steal Duncan Moreland banked home a runner to extend Beverly’s lead to five points.

After Burlington’s Shane Mahoney and Bouras exchanged short jumpers, Burlington’s Aidan Olivier scored from in low to cut Beverly’s lead to three points. But time was running out forcing the Red Devils to have to foul as Bouras hit four free throws in the final 30 seconds, to help the Panthers finally put the game away for good.

“Usually the first team to score first in overtime wins, and Beverly scored first by hitting a big three,” said Burlington coach Phil Conners. “We gave up three offensive rebounds and turned it over a couple of times in overtime which hurt us. Overall we didn’t play well tonight, but we played extremely hard.”

While Bouras and Moreland finished with 16 and 12 points respectively, the big gun for the Panthers was Gabe Copeland, who hit several tough shots to end up with a team-high 18 points. Their efforts helped Beverly advance to the Division 2 North final against the winner of Wednesday’s Belmont-Latin Academy game.

The Panthers showed why they were the top seed in the early going, when two baskets by Copeland, and one basket each by Bouras and Moreland, helped give Beverly a quick 11-5 lead.

The Red Devils fought back a bit in the final minutes of the opening quarter, as sophomore point guard Shane Mahoney, who finished with 12 points, scored at the basket. After Melanson also converted from in low, Olivier, who was held to seven points, hit his only three at the buzzer, to cut Burlington’s deficit to 15-12 by the end of the quarter.

“I felt we played great defensively, but we didn’t shoot well and took some bad shots,” said Conners. “That happens in the atmosphere of a tournament game. While Beverly was stronger than us, I felt we did a good job on the boards. But we missed some shots we don’t usually miss, and that put us behind.”

Then down five points, first Melanson, then Justin Bairos, both nailed threes that cut Burlington’s deficit to one point (25-24) by halftime.

Copeland and Moreland both hit shots to briefly extend Beverly’s lead to five points before the Red Devils battled back again.

This time Melanson hit another from downtown and two free throws. Inglis also scored from in low, to cap a 7-2 run that tied the game (33-33) halfway through the third quarter.

The Panthers regained control of play once again and dominated the rest of the quarter.

Copeland hit three shots from in close, while Justin Delacruz and Nick Braganca also scored from in close, to key a 10-4 run that gave Beverly a six-point lead (43-37) by the end of the third quarter.

Melanson hit another three early in the fourth quarter to draw Burlington to within four points (46-42) before Beverly surged.

Jack Crowley and Moreland both hit baskets from in close while Copeland hit a three for a 7-0 run that extended Beverly’s lead to 11 points (53-42) with just three minutes left in the fourth quarter.

But just when it appeared Beverly was about to put the game away, the Red Devils went on a stunning run to erase their entire deficit.

Inglis was immense, first scoring six points including a three, to cut Burlington’s deficit to five (53-48).

Then after Mahoney and Bouras traded threes with just under a minute left, Inglis was fouled attempting a three, and hit all three free throws to cut the gap to just two points.

Then off a steal, Inglis drove to the basket and scored to tie the game (56-56) with 12 seconds left in the fourth quarter.

“That fourth quarter rally was amazing, and we couldn’t have done that without the highest caliber of kids that we have,” said Conners of Inglis. “To come back from down 11 with three minutes left, that doesn’t happen often. I’m proud of them for being able to pull off that comeback.”

Bouras almost won it for Beverly in regulation as he penetrated into the lane for a good look but missed a short jumper at the buzzer.

However, Bouras reedemed himself as he stepped up in overtime by scoring nine points himself in the extra session, to help the Panthers still come out on top.

Despite the disappointing end to Burlington’s season, Conners offered praise to his players who he felt exceeded all expectations.

“We had one starter back from last year, and we went 18-5 and took the top seed to overtime in the North semifinals,” said Conners. “That doesn’t usually happen. But we did it with our kids, who worked so hard to all year. I am just so proud of these kids for how they battled and fought so hard all season to get here.”