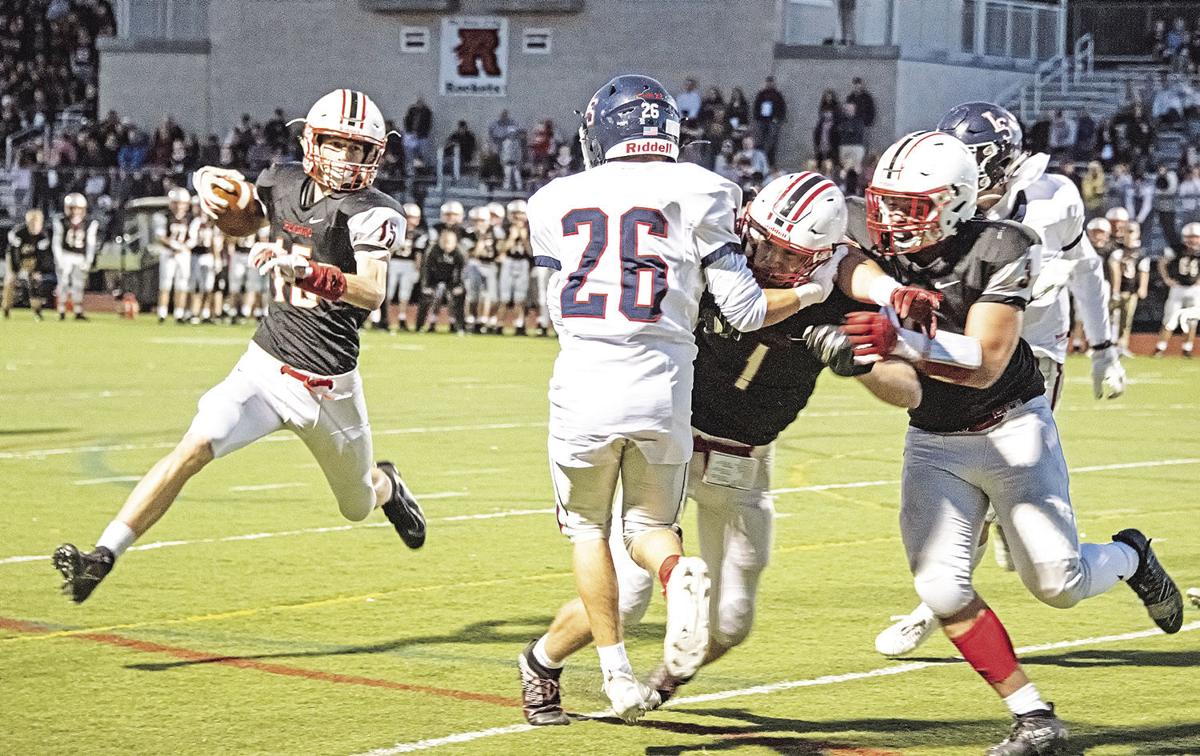 Reading’s Patrick Harrigan looks to cut off the blocks of teammates Dan DiMare (1) and Nick Bates (3) on Lincoln-Sudbury’s Evan Munuz (26) during action from Friday’s game at Hollingsworth Field. The Rockets lost a late lead to lose to Lincoln-Sudbury, 21-20. 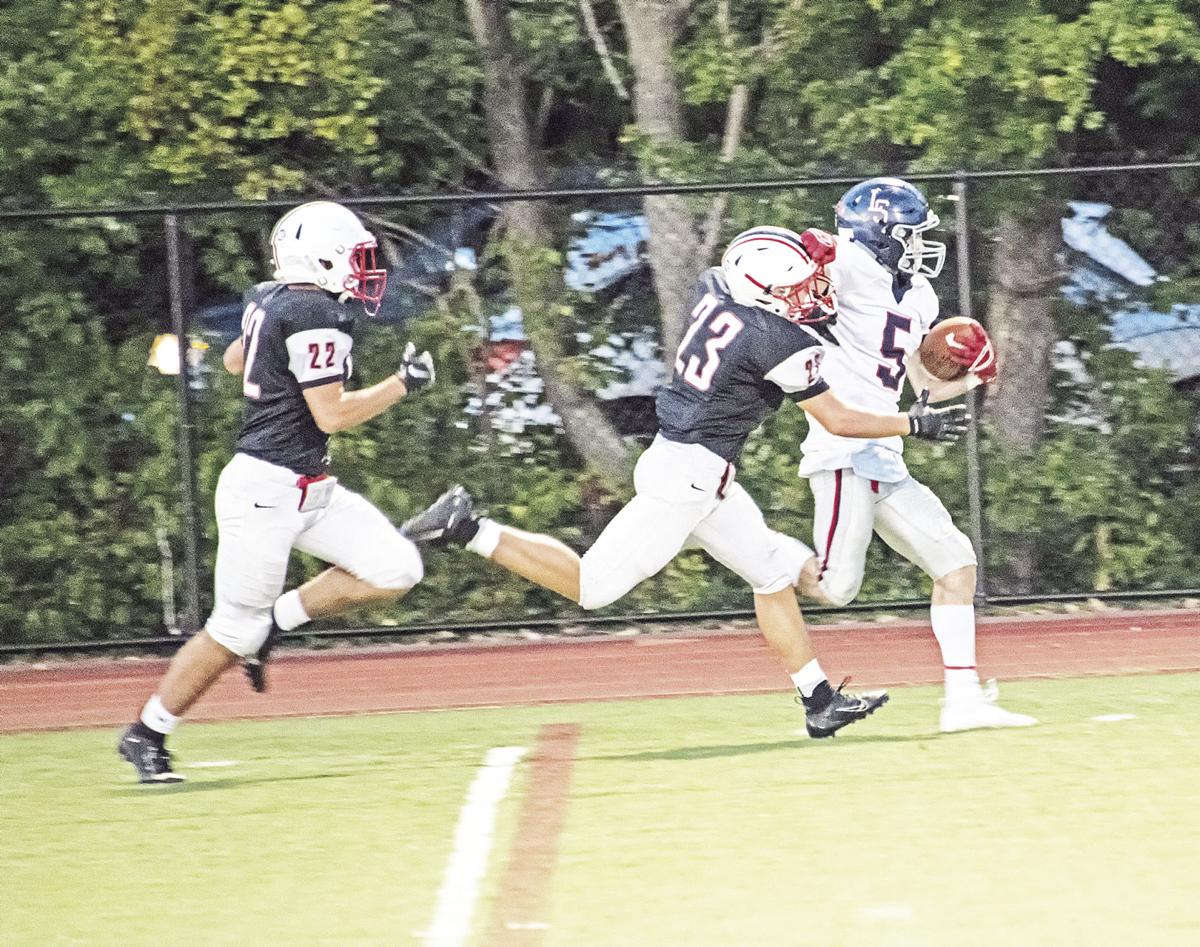 Reading’s Patrick Harrigan looks to cut off the blocks of teammates Dan DiMare (1) and Nick Bates (3) on Lincoln-Sudbury’s Evan Munuz (26) during action from Friday’s game at Hollingsworth Field. The Rockets lost a late lead to lose to Lincoln-Sudbury, 21-20.

READING — If the Reading High football team ever hears the name “O’Connell” again, it will be too soon.

Last year Braden O’Connell delivered a 75-yard hail mary touchdown pass with 11 seconds left as Lincoln-Sudbury stunned the Rockets in the Div. 2 North playoffs; this year it was his brother’s turn. Sophomore quarterback Riley O’Connell delivered a 30-yard touchdown strike to Taimir Morel with 29 seconds on the clock, then connected on a two-point conversion pass to Griffin Brown to hand the Rockets a heartbreaking 21-20 defeat, Friday night at Hollingsworth Field in the season opener.

Reading seemingly had the game in control with a 20-13 fourth-quarter lead, a fresh set of downs at the Lincoln-Sudbury 20, and just 2:10 remaining on the clock. But the Warriors held on three run plays, burning their final two timeouts, then broke up a fourth-down endzone pass to regain possession.

L-S then marched 87 yards in the final 1:48 to pull out the improbable win.

The Warriors executed a well-timed trick play, with wide receiver Andrew Cahill taking a lateral from O’Connell, then tossing a 37-yard completion to Brown to midfield. Reading had the Warriors on the ropes a second time, applying heavy pressure on third and 10, only to see O’Connell escape the pocket and run for a back-breaking 17-yard, first-down scramble — the longest run of the game for either team — to the Reading 33.

One play later O’Connell hit Morel in the endzone in traffic, with Morel wrenching the ball free from a defender for the touchdown.

Trailing 20-19, first year head coach Jim Girard opted to go for the win on the road, and O’Connell didn’t let him down, finding Brown dragging across the back of the endzone for the game-winning two-point conversion.

“He’s very mature for a sophomore, physically and from an emotional perspective. He’s very even-keeled,” said Girard, of O’Connell. “He’s everything you want in a quarterback, a great leader. For a sophomore to command the respect of the older guys, that’s pretty amazing.”

On the other side of the field it was obvious to all that both this season and the future is bright with freshman quarterback James Murphy at the helm. In his varsity debut Murphy was 13 of 21 passing for 298 yards and three touchdowns. Wide receivers Colin DuRoss (5 catches, 76 yards, two-point conversion), Patrick Harrigan (3 catches, 121 yards, touchdown), Dan DiMare, and Dante Barboza all made great open-field plays and made great receptions in traffic.

But given the way the game unfolded there were no celebrations, only obvious disappointment on the Reading sidelines. The Rockets played well in some phases of the game, but fell short in others. Reading’s offensive line surrendered five sacks, including back-to-back sacks on the last two plays of the game, and its secondary gave up a whopping seven pass plays of 30-plus yards each.

“We are what we are—we didn’t coach well, or practice well, so we played sloppy,” said Reading head coach John Fiore. “Our kids made some great plays, but everything that went bad is on me. We’ve got to do a better job and get this together fast.”

The Rockets let slip an early opportunity to take the first lead of the game. DuRoss intercepted O’Connell at the L-S 24 territory on the Warriors’ second possession. Reading had a first and goal at the L-S 10, but the Warriors held on four downs, including a critical stop by defensive end Finn Garrity, who tackled Harrigan for no gain on end around on fourth and goal at the two.

L-S then marched 98 yards on 10 plays to take a 7-0 lead as the second quarter began. O’Connell by now started finding his range and the Rockets had no answers for Brown (5 catches, 133 yards, two touchdowns), who hauled in catches of 42 and 32 yards on the drive. O’Connell also converted a crucial fourth and two at the Reading 22 with a five-yard pass to Andrew Cahill, then connected with a 17-yard touchdown pass to Brown.

That set off a flurry of touchdowns to close out the first half. Reading immediately answered with a five-play, 77-yard answering touchdown drive. Murphy connected with Evan Theis for a short pass, which turned into a 22-yard swing after L-S was called for roughing the passer. That pushed Reading to the Warriors’ 48. Murphy then found Harrigan in 1:1 coverage, and the 6-4 junior won a leaping battle for the football, then raced 48 yards for the score. Ben Ferrante’s extra point failed.

The Rockets took their first lead of the game just three minutes later. John Brezenski sacked O’Connell on third down to force a punt, and a short kick gave Reading starting possession on its own 47. The Rockets were heading in reverse following a false start and a holding penalty, but executed a great quick pass to counter an all-out L-S blitz. Murphy hit DiMare in the left flat, and sprung by a great block mid-run DiMare raced 65 yards down the sideline for the touchdown.

Murphy’s two-point conversion attempt to Harrigan fell incomplete, but Reading had its first lead (12-7) with 6:01 left in the first half.

But L-S struck again with another big pass play to reclaim a 13-12 lead at halftime. Facing a third and 9 at his own 39, O’Connell hit a wide open Jesse McCullough for a 54-yar strike to the Reading seven. Reading stopped L-S on three downs, but on fourth and goal O’Brien rolled left and found Brown in the endzone for a five-yard touchdown pass.

The second half began with the defenses finding their stride. Reading had a promising drive end at the L-S 15 following back-to-back sacks of Murphy by linebackers Jimmy O’Connor and Ben Ohler. Ohler not only sacked Murphy from the blindside but also chopped the ball from his hand, recovered by Finn Garrity to end the drive.

But Reading’s defense stepped up in return. Junior defensive lineman Sean Bekkenhuis made a first down stop for minimal gain, then tipped O’Connell’s third down pass at the line of scrimmage, forcing a deep punt from the L-S 18.

Reading took possession at the Warriors’ 45 and reclaimed the lead (20-13) with five-play scoring drive to end the third quarter. Harrigan made a sensational catch over a defender and cut upfield for a 33-yard reception to the L-S 10. On third and goal Murphy found Barboza in the flat, and Reading’s senior wide receiver left a defender sprawling on the turf with a nifty move and a seven-yard touchdown catch. Murphy then rolled right and found DuRoss for a leaping two-point conversion.

Reading held on downs at its own 41 on L-S’ next possession and had an opportunity to run out the clock for the win. The Rockets ‘ running game started finding room, as DiMare ground out a pair of first downs off the right side behind blocks from Chris Chiulli and Dom DeCrescenzo.

But the Warriors held Reading at their own 13, leading to O’Connell’s last minute heroics.

The Rockets hope to bounce back on the road next Friday at Acton-Boxborough (7 p.m.).