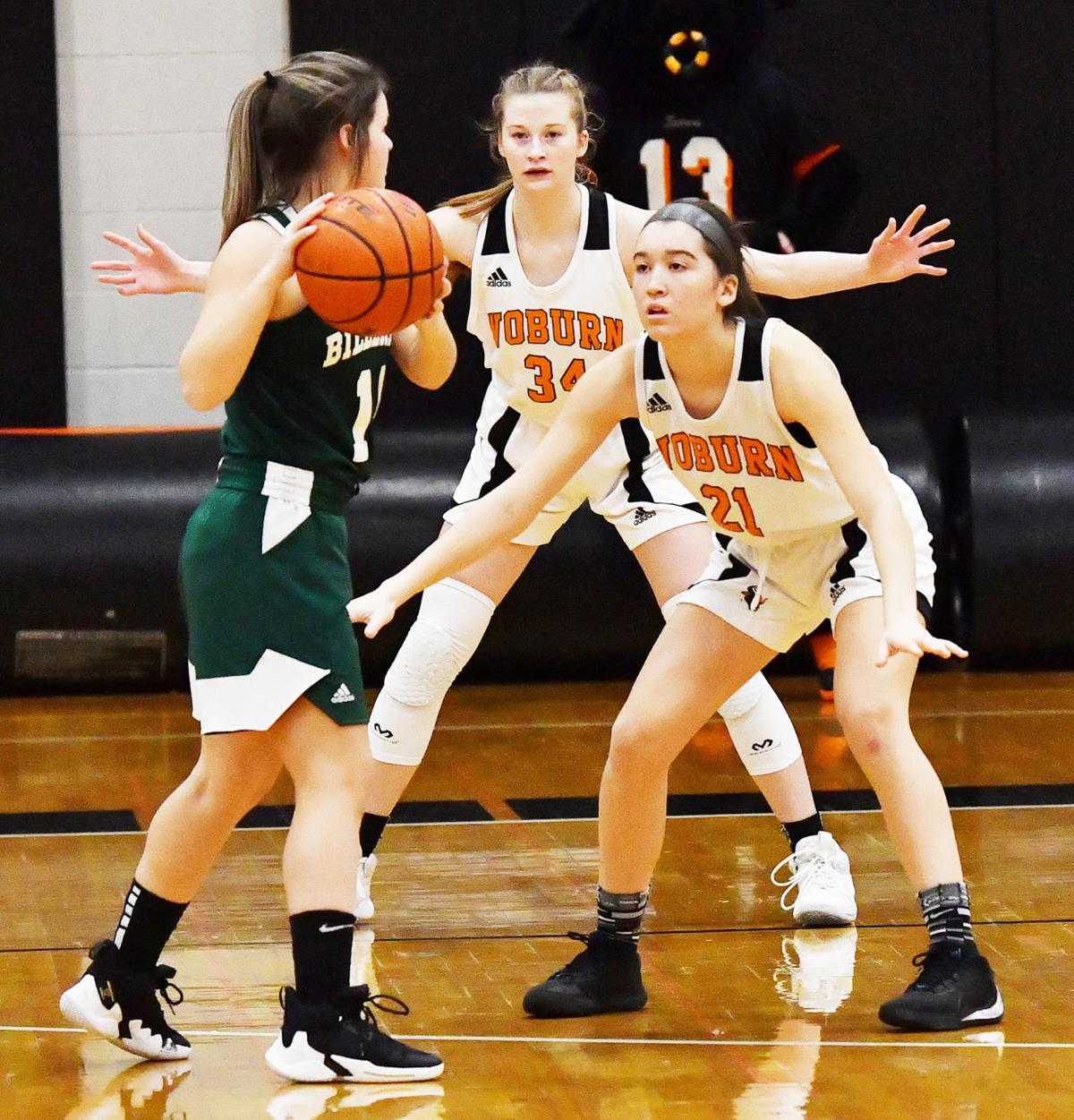 Woburn players Meghan Qualey (rear) and Megan Roderick (21) keep an eye on Billerica's Sydney Sartell who was looking to pass the ball into the Woburn zone defense. The Tanners rallied back from a seven-point fourth quarter deficit to win, 58-56, to move on to the Division 1 North semifinals. 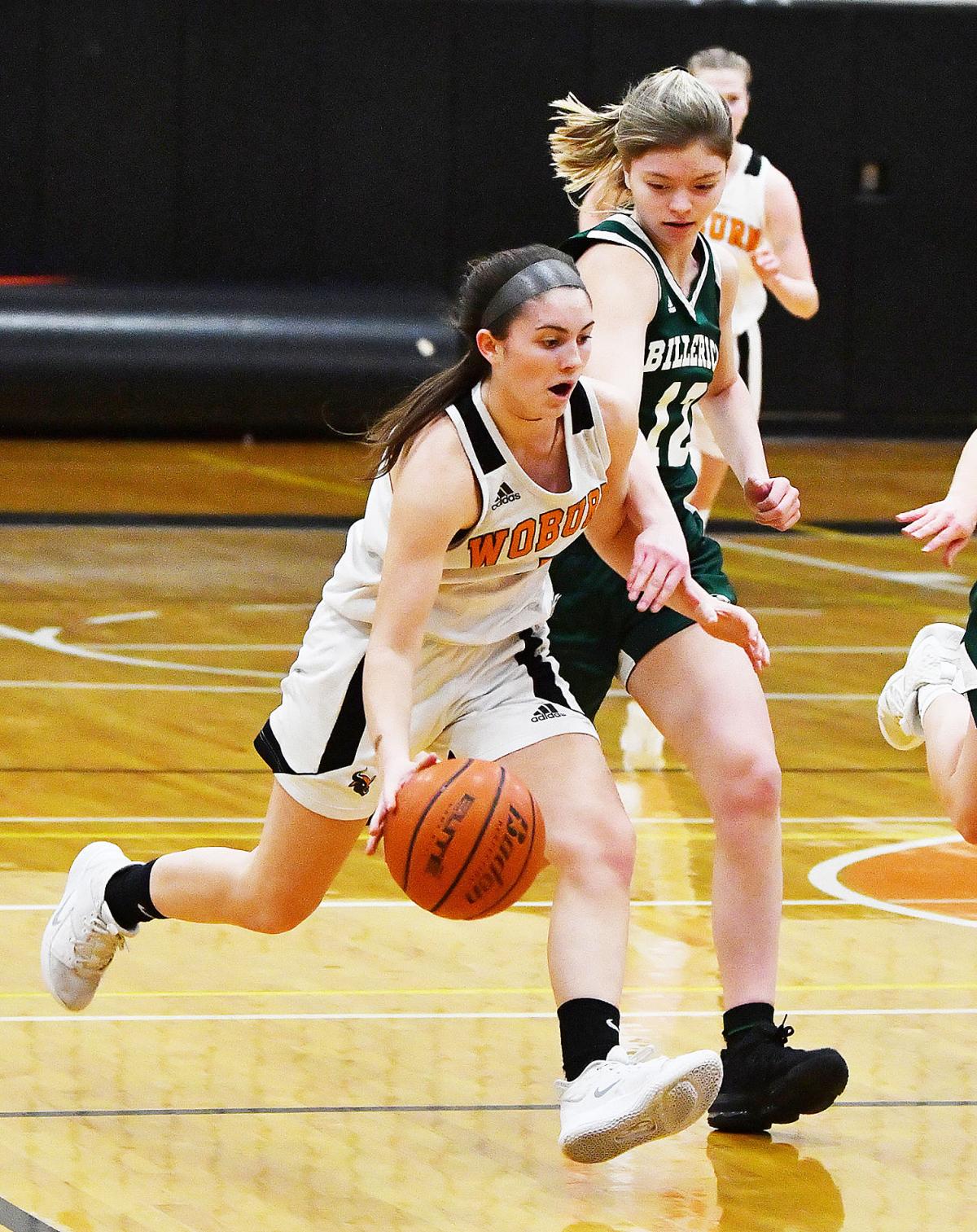 Woburn players Meghan Qualey (rear) and Megan Roderick (21) keep an eye on Billerica's Sydney Sartell who was looking to pass the ball into the Woburn zone defense. The Tanners rallied back from a seven-point fourth quarter deficit to win, 58-56, to move on to the Division 1 North semifinals.

WOBURN — As the fourth quarter got under way in Saturday night’s MIAA Div. 1 North quarterfinal, the situation was not looking good for the top-seeded Woburn High girls’ basketball. Eighth-seeded Billerica was outplaying the Tanners and it scored the first basket to take a seven-point lead.

However, no one bothered to stop the game and ask the Woburn players to analyze the situation they were in. The Tanners just kept doing what they do: play fast, defend and give it all they had.

It was still a six-point game, midway through the fourth, when Woburn’s intense effort led to an incredible, 13-2 run that put the Tanners ahead to stay in a 58-56 triumph over the Indians at a packed Torrice Gym.

What was amazing about it was that Woburn did not rely on any one player to turn things around for them. Instead, it was about five or six players who stood up and made plays on either offense or defense to get the job done and keep the momentum going down the stretch.

The Tanners could have won it by a few more points but shot 2-for-10 from the free throw line in the last 1:09, stretching the drama out to the final buzzer.

Woburn will next host fourth-seed Cambridge (18-4) in the semifinals, Wednesday night (7 p.m.) back at Torrice Gym.

“I can’t give enough credit to the girls, they were down seven and they never put their heads down, they never quit, they just dug in,” said Sullivan. “They are an incredible group and I couldn’t be prouder of them. We just need to work on free throws.”

The first half featured a battle of the number 21s on both teams. Woburn’s Megan Roderick started the game by missing her first shot, then stealing it away from the girl who got the rebound, and then putting in her second shot. That started a first quarter that saw her score 11 points, and 16 for the half, including a pair of 3-point buckets.

Billerica’s Madison Watford was the best player on the floor. She was big and strong, but had a soft shooter’s touch that allowed her smoothly drain threes, while being automatic underneath the basket. On defense, when Watford wasn’t swatting away shots and grabbing rebounds, her mere presence altered many of the Tanner shot attempts in the paint. She had 14 points in the first half.

Woburn led for much of the half, getting the lead up to as high as eight (22-14) in the second quarter before the Indians began settling in and running their offense. It was still a six-point game late in the half when Billerica went on a 7-0 burst, culminating with a Julia Trainor steal and layup that gave the Indians their first lead of the game, 28-27. Two Ashlyn Pacheco free throws gave the Tanners the lead at the half, 29-28.

“They (Indians) are very good,” said Sullivan, of Billerica “They are well-coached, they run nice back cuts, nice screens, they move very well.”

The third quarter began with a Meghan Qualey triple off the glass from the right side to get the lead up to four, but Billerica answered with a three from Madison Bonvie and two free throws from guard Taylor Gibson put the Indians back in front, 33-32.

Back and forth it went until Billerica went on another 7-0 run, this one giving the Indians an eight-point lead with 32 seconds left in the third. Watford had a conventional three-point play, Sofia Mazzotta made a shot, and Gibson added two free throws. Pacheco hit three free throws after getting fouled beyond the arc to make it a five-point game (45-40) after three.

“We knew all along she could play,” said Sullivan, of Watford, who had 19 points. “She could shoot the ball, she hit some threes on us early, she was a physical player inside. I thought we did a much better job in the second half on her.”

It was 51-45, midway through the fourth, when Woburn began to catch fire. Carley Pandora started it with a layup, Cyndea Labissiere hit two free throws, and Qualey hit a mid-range jumper to tie the game at 51-51.

Down the other end, Qualey took a charge to keep the momentum going forward. Sydney Sartell hit both ends of a one-and-one to briefly put the Indians back in front, 53-51, with 2:09 left, but Roderick (21) responded right back with a three that put the Tanners back in front to stay, 54-53.

Labissiere came up with a steal at mid-court and the foot race to the basket culminated in a 360-spinning reverse layup that was simply awesome.

Gibson, Billerica’s second-highest scorer, had four fouls on her when she tried to cover Labissiere the next time down the court. The freshman blew by the senior, forcing her to foul out to avoid the easy layup. Pacheco then took a charge on one defensive stand, and then on the next one, wrestled a loose ball away while lying on the ground, and then calling timeout before the tie-up, allowing the Tanners to keep the ball.

“All those little plays matter, a lot,” said Sullivan. “We made just enough of those and they turned out to be big plays, and now we live to play another game.”

The missed free throws were keeping the Indians slim hopes alive, and then when Sartell hit a 30-foot trey from straight away, it was a two-point game (58-56) with 10 seconds left. Watford ended the game with a dramatic shot from the Billerica side of mid-court, but the attempt came up just short.

“I think the girls just dug down deep,” said Sullivan. “Things weren’t going well. We were slowing down and not getting much going offensively. We were just able to dig in, get a few stops and start playing fast. When we play fast we are really, really good.”

There was a little controversy brewing, last night, regarding the Tanners being allowed to host a semifinal game it was playing in. We will see if anything develops there.