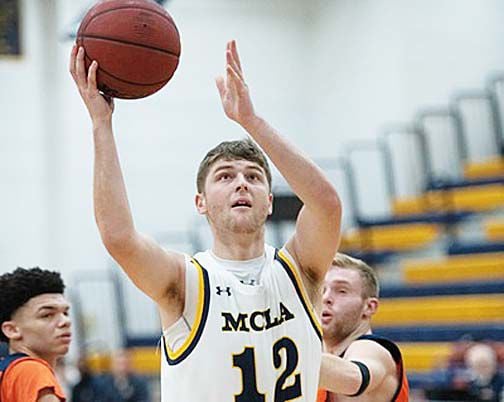 Mike DeMartinis of Burlington has continued his basketball career in college for Mass College of Liberal Arts (MCLA), which is the old North Adams State. A 1000-point scorer in high school, the 6-3 junior forward is well on his way to achieve that again next season. 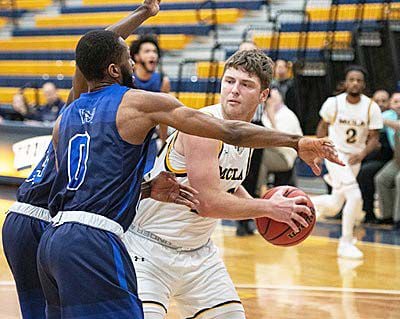 MIKE DeMARTINIS of Burlington is double teamed during a game for Mass College of Liberal Arts during the past year. The Red Devil standout will be quick to point out that the competition is tough on the Division 3 level in college. You have to compete and play well every game. DeMartinis has succeeded in that challenge and has seen plenty of playing time during his first three years at the North Adams campus.

Mike DeMartinis of Burlington has continued his basketball career in college for Mass College of Liberal Arts (MCLA), which is the old North Adams State. A 1000-point scorer in high school, the 6-3 junior forward is well on his way to achieve that again next season.

MIKE DeMARTINIS of Burlington is double teamed during a game for Mass College of Liberal Arts during the past year. The Red Devil standout will be quick to point out that the competition is tough on the Division 3 level in college. You have to compete and play well every game. DeMartinis has succeeded in that challenge and has seen plenty of playing time during his first three years at the North Adams campus.

Burlington native Mike DeMartinis was already a standout basketball player at Burlington High, having scored 1,086 points in his high school career before graduating in 2017.

Yet since moving on to Massachusetts College of Liberal Arts (MCLA) in North Adams, DeMartinis has continued to excel as a forward on the basketball team. Under head coach Derek Shell, DeMartinis could be eclipsing the 1000-point milestone again as he has scored 758 points in three years, averaging 10.3 points per game.

More importantly, he has really enjoyed the experience.

“It’s been great for me in my three years so far at MCLA, and I am looking forward to my senior year,” said DeMartinis. “I have received a lot of support from coach Shell and my teammates, and together we worked hard to become a successful team this past season. So overall things have worked out well for me here.”

In his freshman year at MCLA DeMartinis appeared in all 26 games, and averaged eight points per game, and was named MASCAC Rookie of the Week after he averaged 17 points per game in a season-opening tournament.

He excelled even more as sophomore when he started all 23 games, and led the team in scoring averaging 13.8 points per game. He scored in double figures in each of the team’s final eight games, including a career best 31 points against Westfield State. His fine play that year helped him to be named team MVP.

In his junior year this past season, DeMartinis started 23 of his team’s 25 games, and averaged 9.3 points per game, in leading MCLA to a 15-11 overall record and a berth in the MASCAC tournament, where he helped the team win one game before falling in the semifinal round.

Division 3 college athletics is quite competitive and more intense than most outsiders may realize.

He notes how more people watch his games at MCLA, and that he has to constantly compete for playing time on a roster that is glittered with players who all excelled for their high school teams..

“We play in front of a lot more people, and they let you hear about it if you’re not playing well,” said DeMartinis. “In high school you don’t always have to play well, but in college you have to play well to start.”

As a small forward at 6-foot-3, DeMartinis attributes most of his success playing basketball at MCLA to his ability to drive to the basket and scoring from in low. He also prides himself for his aggressive defensive play.

“I try to get the ball inside and go right to the basket,” he says. “I also play very aggressively on defense. I always try to force turnovers and steals, and prevent opposing players from driving inside.”

DeMartinis feels he has blended in quite well with his teammates during his three years playing basketball at MCLA, who are his closest friends there. He notes how while many of his teammates are from Massachusetts, a few are from other eastern states such as New York, Pennsylvania, Maryland, and Virginia.

“Most of my best friends at MCLA are my teammates,” said DeMartinis. “Overall I blend in with them really well, and we really get along well together on and off the court.”

Prior to college, DeMartinis was a four-year varsity veteran at Burlington High. Coming up through the Mass Elite AAU program under director Eric Polli, DeMartinis developed into a talented player that earned him a varsity spot as a freshman for Burlington High.

He underwent a bit of a transition in his senior year when Phil Conners became the team’s head coach. While Lyons had placed more emphasis on the inside game, Conners stressed more aggressive defense and moving the ball around the perimeter for the open 3-point shot, an adjustment DeMartinis made successfully.

“It was a bit of a transition from coach Lyons to coach (Phil) Conners my senior year,” said DeMartinis. “Coach Lyons emphasized giving the ball to the inside man, so I did more scoring from in close to the basket. Coach Conners emphasized more defensive play, and moving the ball around the perimeter to the open man who would take the outside shot. So I did more scoring from outside.”

DeMartinis averaged 19.2 points per game as a senior with 39 3-pointers to again be named to the Middlesex League All-Star team.

In his senior year he had several schools to choose from to further his education and basektball career. But, it was the relationship he developed Shell that compelled him to chose MCLA.

“I considered Framingham State, UMass Boston, Emmanuel College, New England College, and MCLA,” said DeMartinis. “I chose MCLA because coach Shell made me feel very comfortable and I developed a good relationship with him. I also wanted to go to a school that wasn’t so close to home, but close enough so that I could still go home on the weekends.”

An Elementary and Secondary Education and History major, DeMartinis will graduate one semester early this December, and will continue to play his senior year at MCLA as a graduate student in the second semester. He aspires to become a history teacher.

“I want to eventually teach somewhere, hopefully close to the Burlington area in Middlesex County,” said DeMartinis. “There are a lot of decent schools in this area, so hopefully I can find a teaching job in this area.”

After his playing career is over, DeMartinis wants to stay in the game as a coach. If he becomes a teacher, it will give him the perfect opportunity to realize his goal to start a basketball coaching career, either at the high school or college level, and pass along what he has learned from his own coaches to younger players.

“I’ve already talked to some of the local coaches in this area,” said DeMartinis. “The good thing about becoming a teacher is that it will allow me to coach basketball as well, so that is definitely something I want to do.”