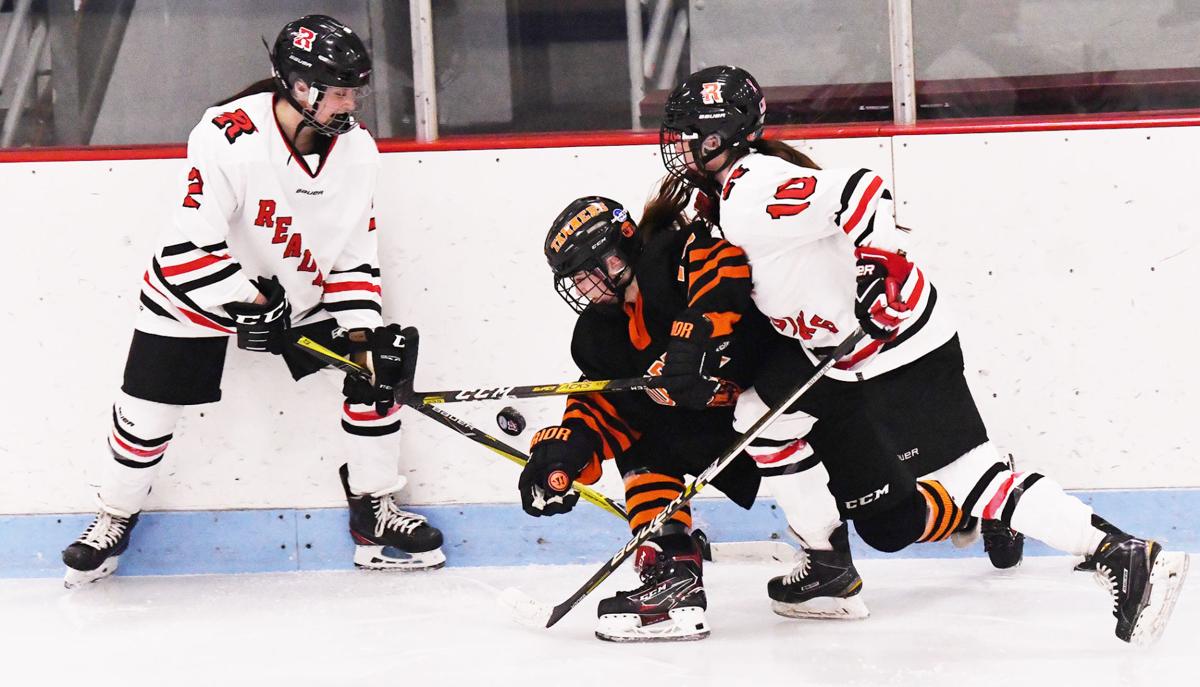 WOBURN’S LILY ANDERSON tries to fight off Reading players Mia Bonfilio (left) and Reading's Paige Murphy (right) in a battle for the puck along the boards. The Tanner girls broke open a tie game in the second period to go on to an 8-2 romp at Burbank Arena on Wednesday. 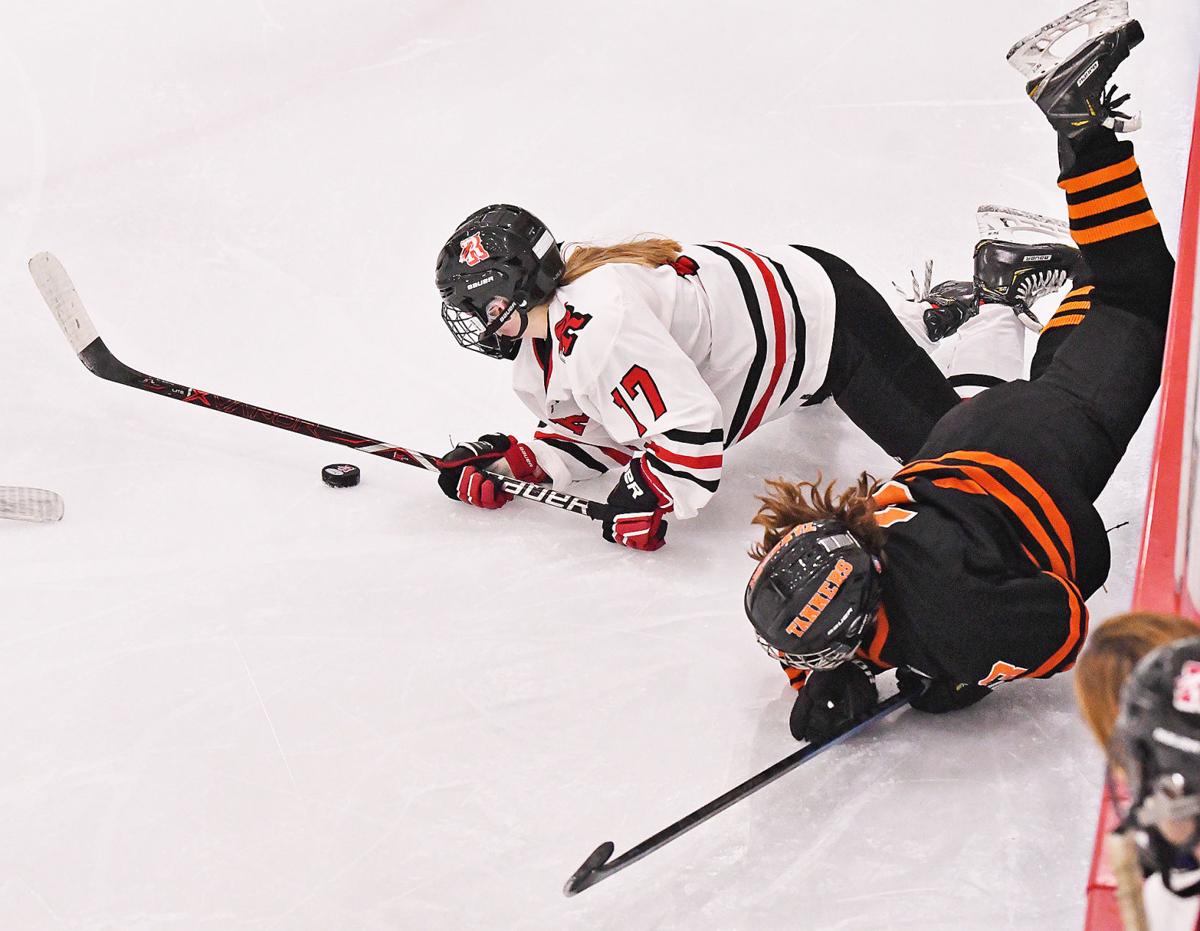 Reading's Lacy Carciero and Woburn's Lily Anderson hit the ice in their battle for possession of the puck during Wednesday’s game at Burbank Arena. The Woburn girls pulled away to an 8-2 win over the Lady Rockets.

WOBURN’S LILY ANDERSON tries to fight off Reading players Mia Bonfilio (left) and Reading's Paige Murphy (right) in a battle for the puck along the boards. The Tanner girls broke open a tie game in the second period to go on to an 8-2 romp at Burbank Arena on Wednesday.

Reading's Lacy Carciero and Woburn's Lily Anderson hit the ice in their battle for possession of the puck during Wednesday’s game at Burbank Arena. The Woburn girls pulled away to an 8-2 win over the Lady Rockets.

READING — If there was anything wrong with the Woburn High girls’ hockey team after its loss to Arlington, Saturday night, it was not apparent, last night, in its 8-2 victory over Reading at Burbank Arena.

The Lady Rockets were still in the game, halfway through, but four unanswered goals by the Tanners in the second period turned a 2-2 game into a sizable deficit, 6-2. Reading played well in the third but could not keep Woburn from adding two more goals to its lead.

“That was really nice to see after struggling the way we did, Saturday, against Arlington,” said Tanners’ interim coach Steve Kennedy, of his team’s offensive output. “It was good to come out here and see the team could put it together offensively. I think we had a little more time and space and we really took advantage of that.”

Woburn got off to a fast start in the first period, taking a 2-0 lead in the first 5:30. Lucia DiGirolamo scored in front, off a pass from ML Pineros at 1:42. Not long after, Reading had a chance to tie but Tanner goalie Amanda Essigmann came up with a nice save on top Lady Rocket forward Sydney Conte.

A little less than four minutes later, the whole first line got in on Bella Shaw’s goal. Kelsey Ficociello and Mackenzie Russo passed the puck back and forth behind the net before Ficociello passed it out front, where an open Shaw one-timed it into the left side of the net to give Woburn its 2-0 lead.

It seemed like that might be the end for Reading right there, but the Lady Rockets propelled themselves right back into the game when Maddie Rzepka took a pass from Paige Murphy and beat goalie Amanda Essigmann, inside the left post, from low in the slot, at 9:16.

Reading tied the game, while short-handed, 3:01 into the second period. While the Woburn defense focused on getting the puck away from Sydney Conte in the right corner, Conte passed to a wide open Murphy in front of the net. Murphy tucked the puck inside the left post.

“We started the game strong, we went up 2-0, and then we fell asleep after that,” said Kennedy. “In the first period the game was tighter than it had to be, and it was good to see the kids come out in the second and play the way they can play.”

The Tanners were still on the power play and they retook the lead, 41 seconds later. Lily Anderson got open for a shot, low in the left circle, and she was able to beat goalie Casey Machera with a wrist shot up high on the stick side.

The second goals for Shaw and DiGirolamo helped build the Tanners lead to 5-2. Similar to her first goal, Ficociello and Russo worked the puck around before getting it to an open Shaw in the slot, where the junior buried it in the back of the net.

“I was very happy with the way Bella, Kenzie and Kelsey played tonight,” said Kennedy. “They are juniors and they really show a lot of leadership out there. Their experience is starting to show in games like this, and I’d like to see that continue.”

DiGirolamo caught Reading on a line change. She camped out on the opposite side of the ice from the benches, just outside the Lady Rockets’ blue line, where Anderson found her with a long pass from in front of the Woburn net. DiGirolamo sped into the zone after collecting the pass and beat the goalie inside the near post, again up high.

Angelina DiGirolamo, Lucia’s freshman twin, got on the scoresheet at long last on a short-handed tally to cap the second period. Angelina made a similar play to her sister after taking a pass from Anderson, only she was being defended. She managed a shot that was saved by Machera, but the rebound was available to Pineros at the far post, and she tapped it in for the 6-2 lead.

Woburn got a goal from Angelina DiGirolamo in the third, and then a late power play goal from senior co-captain Erin McComiskey for the 8-2 final.

“The scoring came from all three lines, which is what we will need to be successful in the long run,” said Kennedy. “I was really happy with the play of our upperclassmen tonight. We really needed it after Saturday night. That loss to Arlington was humbling.”

Reading will be looking to rebound, this Saturday night (8 p.m.) when it returns to Burbank Arena to host Belmont. The Tanners travel to Hayden Rink, the same night (7:15 p.m.), to take on Lexington.