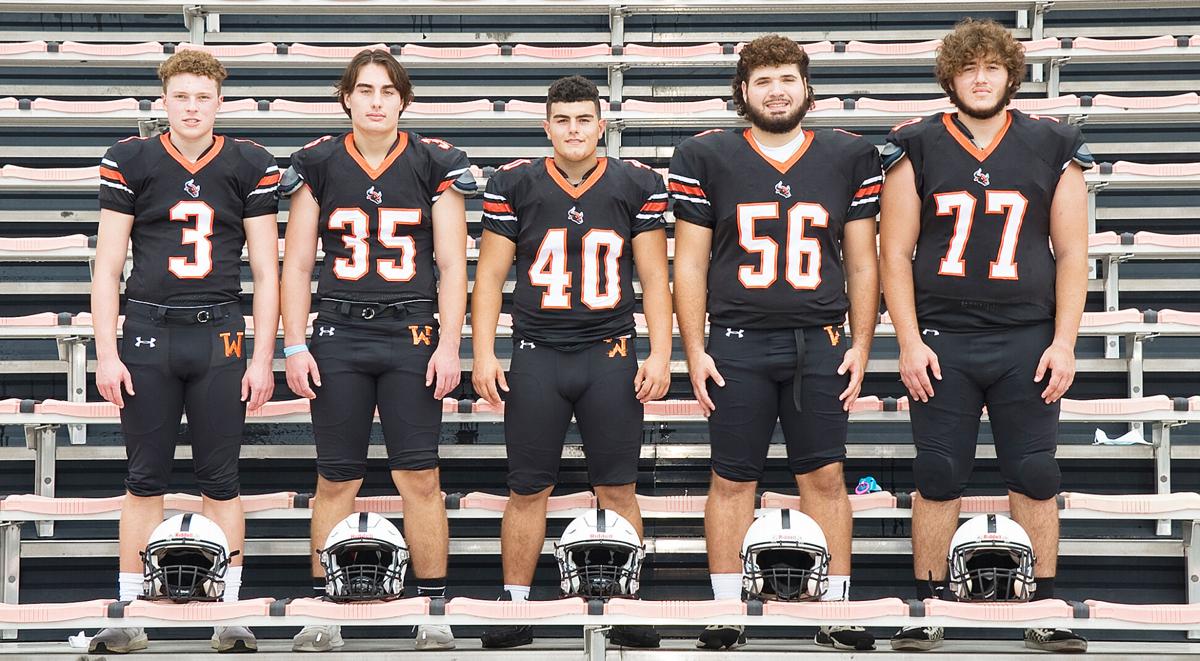 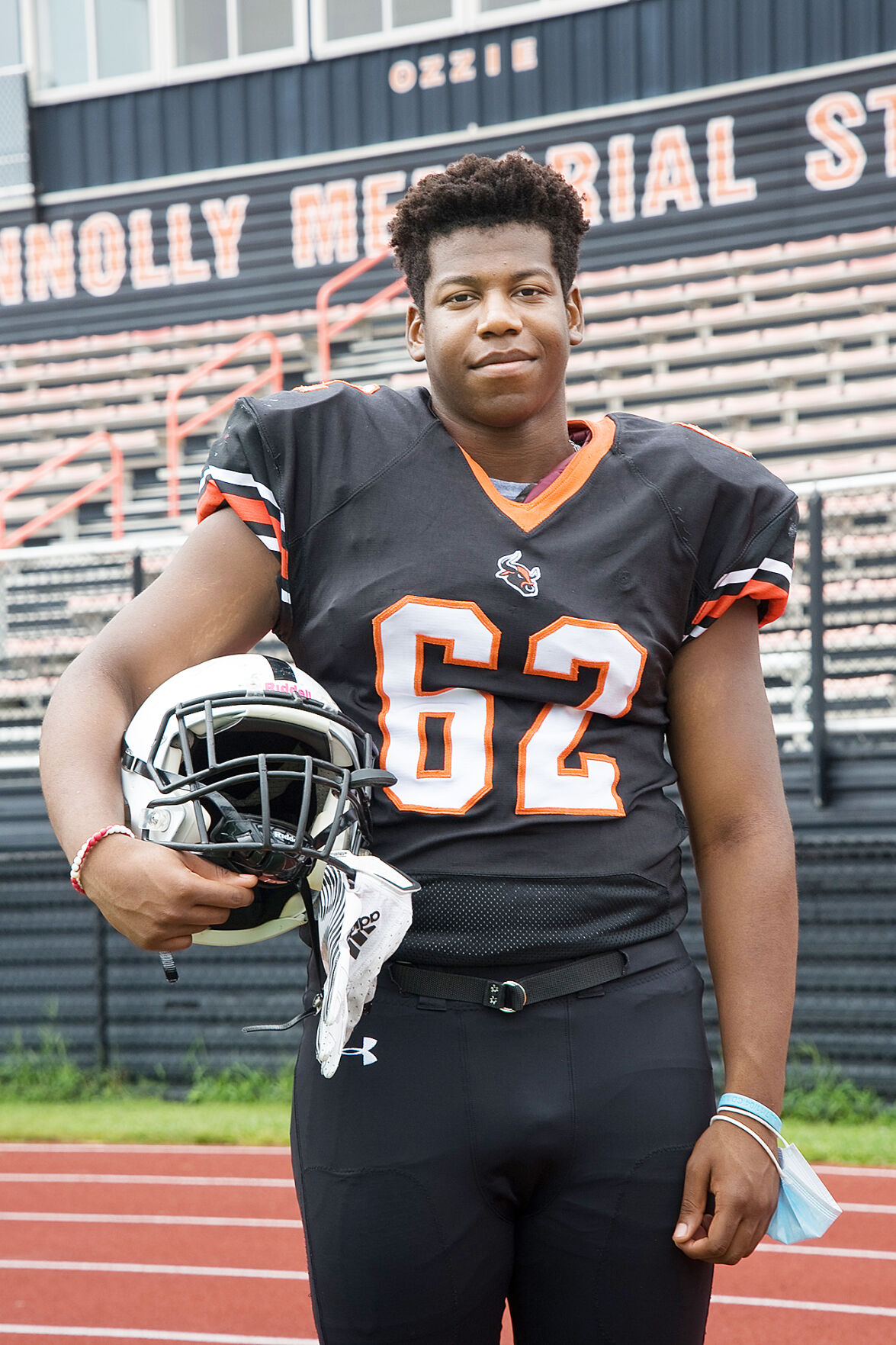 KEVIN KAZADI, one of the Woburn football captains, is a two-way tackle and a three-year starter for the Tanners. He knows this is a once in a lifetime opportunity to play at Fenway Park “and a chance to show everyone what we’ve got and how hard we’ve worked for this season.” 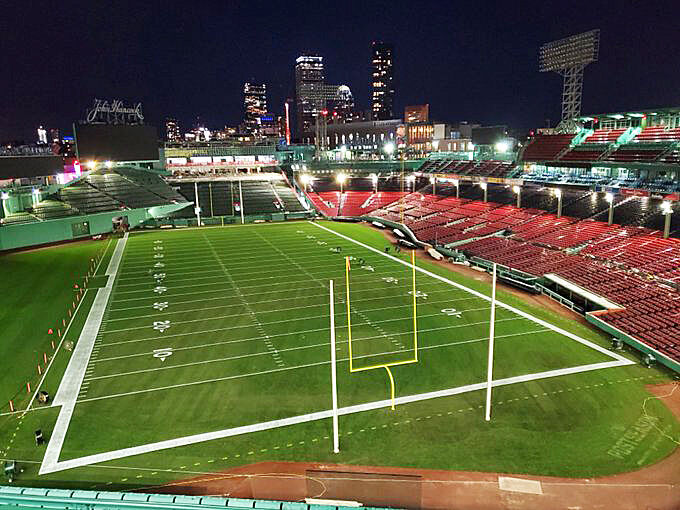 FENWAY PARK as it will be seen at night when Woburn and Winchester take to the field on Wednesday for the 120th renewal of the series.

KEVIN KAZADI, one of the Woburn football captains, is a two-way tackle and a three-year starter for the Tanners. He knows this is a once in a lifetime opportunity to play at Fenway Park “and a chance to show everyone what we’ve got and how hard we’ve worked for this season.”

FENWAY PARK as it will be seen at night when Woburn and Winchester take to the field on Wednesday for the 120th renewal of the series.

WOBURN — Rumors were swirling about a Woburn-Winchester football game to be played at Fenway Park going back to July.

When head coach Jack Belcher first received the call about the proposed game he was going to leave it up to his seniors. The Tanner seniors were presented with two pretty good options to finish off their high school careers, according Belcher: “Play at home on Thanksgiving or play at Fenway Park.”

After things were agreed upon and the game became a reality, the Woburn High football captains are more than enthused about playing the 120th reunion of this storied rivalry at a storied venue.

All echoed pretty similar thoughts that this was a “business trip” and they were not going to be in awe of the place, yet it is “pretty cool to be playing” there.

They also are pretty happy the way the season has evolved to date and want to go out 8-2 and leave a legacy for the upcoming classes to aspire to.

Senior captain Derek Dabrieo (WR/CB): “I thought it would be a good experience and pretty cool to be playing on that stage. We’re just going to have a good time out there.

“I just want to win a football game and I’m just as happy to do it there (as compared to in Woburn).

“This has been one of the better years we’ve had here in a very long time. I hope we can keep it up and the future is going to be bright for this program.”

“I think like in warmups I may look around a bit, but other than that, I don’t want to do anything too crazy, I kinda want to then go play.

“I think playing there is going to be a great experience and we will never forget it.”

Senior captain Jake Daniell (FB/DE): “It’s real exciting, I’m not upset we’re not at home, but we are still the home team there.

“Like coach always says (about road games), it’s a business trip. Not playing (in Woburn) is OK, we haven’t played in a big stadium with that many people, it’s going to be fun.

“It’s definitely been a great season and it was really fun to play in.”

Senior captain Anthony Palmieri (C/DT): “We were in the weight room (in the summer) when I heard about this game. I’m just ready to play this game and go forward.

“We put a lot of hard work into the preseason, a lot of grinding.”

Senior captain Kevin Kazadi (OT/DT): “I am super excited, you don’t get too many opportunities to play at a place like that.

“No disappointment (not playing in Woburn), I know for me this is a once in a lifetime opportunity, and a chance to show everyone what we’ve got and how hard we’ve worked for this season.”

Belcher couldn’t be prouder of his senior leaders.

“I think they started coming toward the end of eighth grade,” recalled the fifth-year coach. “This class, and these guys especially, along with Yahya (Aksadi), who’s a captain too but still on crutchers, and a handful of others in this class started coming right away.

“Then as freshmen they did their thing in the fall, and have been constant faces in the weight room,” Belcher went on. “I’ll miss them more than they’ll miss me, which is fine. But, after the holidays when we start our workouts before the sun comes up, and they won’t be there, they’ll love sleeping in, which is good because they’ve earned that, but it will be a little bit of an adjustment for me when their faces aren’t around. They’ve been constants and nothing but positives for the program since the end of their eighth grade year. They’ve set the bar high.”

The example this class has set just continues to extend at all levels and aspects.

“They’ll be things in that game that we haven’t prepared for,” said Belcher, “but they are good at making adjustments on the fly, being mature. We’ve had sophomores and juniors playing key roles all year. They see our they (seniors) react so that’s how they react. That’s part of their vibe.”