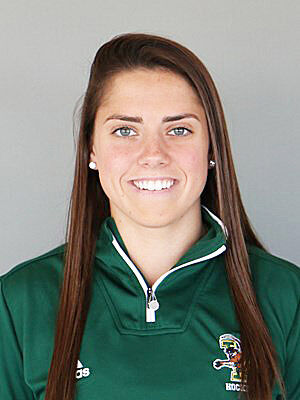 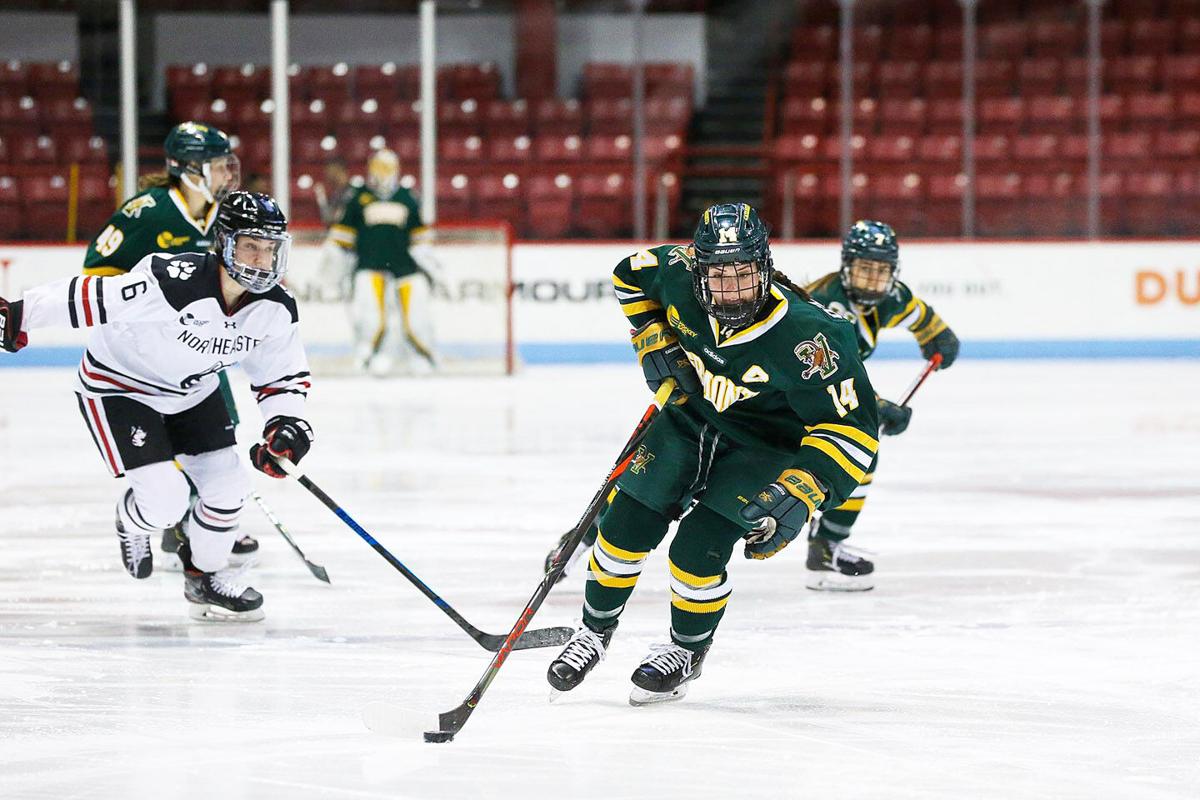 Five years ago after leading Reading High to the Division 1 state girls hockey title, O’Leary made a tough decision to pass up playing for her high school team as a senior to focus on one day playing Division 1 college hockey — which she did for the University of Vermont.

ALI O’LEARY became a faceoff wiz at the University of Vermont. The senior captain took all the important draws for her team.

Five years ago after leading Reading High to the Division 1 state girls hockey title, O’Leary made a tough decision to pass up playing for her high school team as a senior to focus on one day playing Division 1 college hockey — which she did for the University of Vermont.

ALI O’LEARY became a faceoff wiz at the University of Vermont. The senior captain took all the important draws for her team.

Five years ago Ali O’Leary was on top of the Massachusetts girls high school hockey world. As a junior, O’Leary was named the state’s top player while her Reading High girls hockey team had won its first ever Division 1 state title in 2015.

But, with her college hockey future in mind, the then 17-year-old forward had to make the difficult decision to move on to junior hockey and not play for her high school team in her senior year. Instead O’Leary, while still attending Reading High, played junior hockey for the Boston Shamrocks which helped earn her a Division 1 college hockey scholarship to the University of Vermont.

O’Leary perhaps could have led Reading back to another state title while also sure to become the program’s all-time scoring leader if she remained on the team.

“It was definitely a tough decision, but I can’t say I have any regrets,” said O’Leary. “Looking back I could have had just as much fun playing my senior year at Reading High, but if I wanted a future to play Division 1 (college) hockey I had to do it.”

Fast forward to the 2019-20 season as O’Leary is now a senior at the University of Vermont and is the captain of the women’s hockey team. A respected player, and voice of the program, O’Leary’s contributions to UVM went far beyond goals and assists and wins and losses.

“Ali was one of the best captains we have ever had here,” said Vermont head coach Jim Plumer. “She is strong in her beliefs and was instrumental in helping our culture take a big step forward this year. I am not overstating that. She really grew into this role over the course of her career and I am personally grateful for how much of her heart and soul she poured into our program, especially during her senior year.”

O’Leary grew up the youngest in a family of three with two older brothers, wanting to play every sport they did. She played youth baseball in Reading against boys through age 12 and was pretty successful at it.

“My dad wanted me to try everything and when I tried on skates it kind of stuck,” said O’Leary.

O’Leary was bound for hockey stardom at Reading High from Day 1 of her freshman year. Her sophomore and junior seasons she was the MVP of the Middlesex League’s Liberty Division. In leading the 2014-15 Lady Rockets to the state title she scored 41 goals, 24 assists for 65 points. In three years in the program she had tallied 155 career points.

But with an eye toward her future she chose to play junior hockey and then went on to the University of Vermont. At first, college was an eye-opener.

“It definitely was a big change for me going from high school to college,” she recalled. “School was never easy for me and to be 18 and off on my own at a pretty big university was different. To have the team was a huge help.”

O’Leary was also no longer the best on a team she played for.

“Everyone in Division 1 sports was the best on their high school team,” she said. “I realized quickly that change. It was a shock at first my freshman year, but I was up for the challenge.”

O’Leary was not going to be a leading scorer with the Catamounts but there would certainly be a role for her if she worked for it.

“When I recruited Ali I thought she was a smart player who played with a bit of an edge,” said Plumer. “She did play this way in college and while she didn’t rack up the points she did in high school, she was one of our best faceoff people and penalty killers by the end of her career. She anchored our second line this year and was involved in some highlight-reel goals we scored by being a great puck distributor.”

CONTRIBUTIONS IN MANY WAYS

Her forte became winning faceoffs as Plumer indicated. O’Leary won 268 draws this past season with a single-game high of 18 against Merrimack.

She thinks part of that reason may be from being right-handed but a left-handed shot in hockey.

“When I was little I just picked up a left-handed stick,” said O’Leary matter-of-factly. “I was later told that it is helpful having your dominant hand be better on the top of the stick.”

While O’Leary may not have led in scoring she led in many other ways. Her character as a quality person has always shown through and that was no different at UVM.

“I learned a lot and grew up a ton in college,” said O’Leary. “I was kind of a shy girl but I started having a voice after experiencing some ups and downs. Sophomore year a lot of things weren’t great and weren’t exactly how I’d like things so when I was named assistant captain my junior year I started having a voice and became a little more vocal. It was kind of nice when others respect what you have to say.”

Her coach also recognized her contributions as a leader.

“She is a team player,” said Plumber, “and cares about others immensely. (She) isn’t afraid to stand up for her own beliefs and what is right for others.”

O’Leary’s best hockey moments for UVM was the program’s annual “Pack the Gut” Game. With no pro sports in Vermont the annual challenge to try and break the women’s Hockey East attendance record always brings a good crowd and excitement.

With her career over, O’Leary finished up two classes remotely during the pandemic that cost her and other seniors graduation ceremonies. She is actually one of the lucky ones that she is now working post-college at “Tout Events” in Malden, in a sales/marketing job.

She leaves UVM better for the experience and goes forward with many new friends as well as still having her core group of high school friends.

“I’m taking a little break from hockey right now, but I hope to have fun with it in the future,” said O’Leary. “Eventually I’d like to get into coaching.”

“Ali leaves our program in a better place than she found it,” said Plumer. “I have no doubt that in a few years we are going to be pointing back at Ali as one of the most important people to have played here.”