Reading's Landyn Greatorex (26) looks to score on the Belmont goalie Nico Carere late in the game but the Belmont goalie came up with the outstanding save to help preserve his team’s 3-2 upset win. The Rockets, the No. 1 seed, were defeated in the Division 1 North semifinal at Tsongas Center on Thursday. Belmont advances to meet St. John’s of Shrewsbury on Monday. 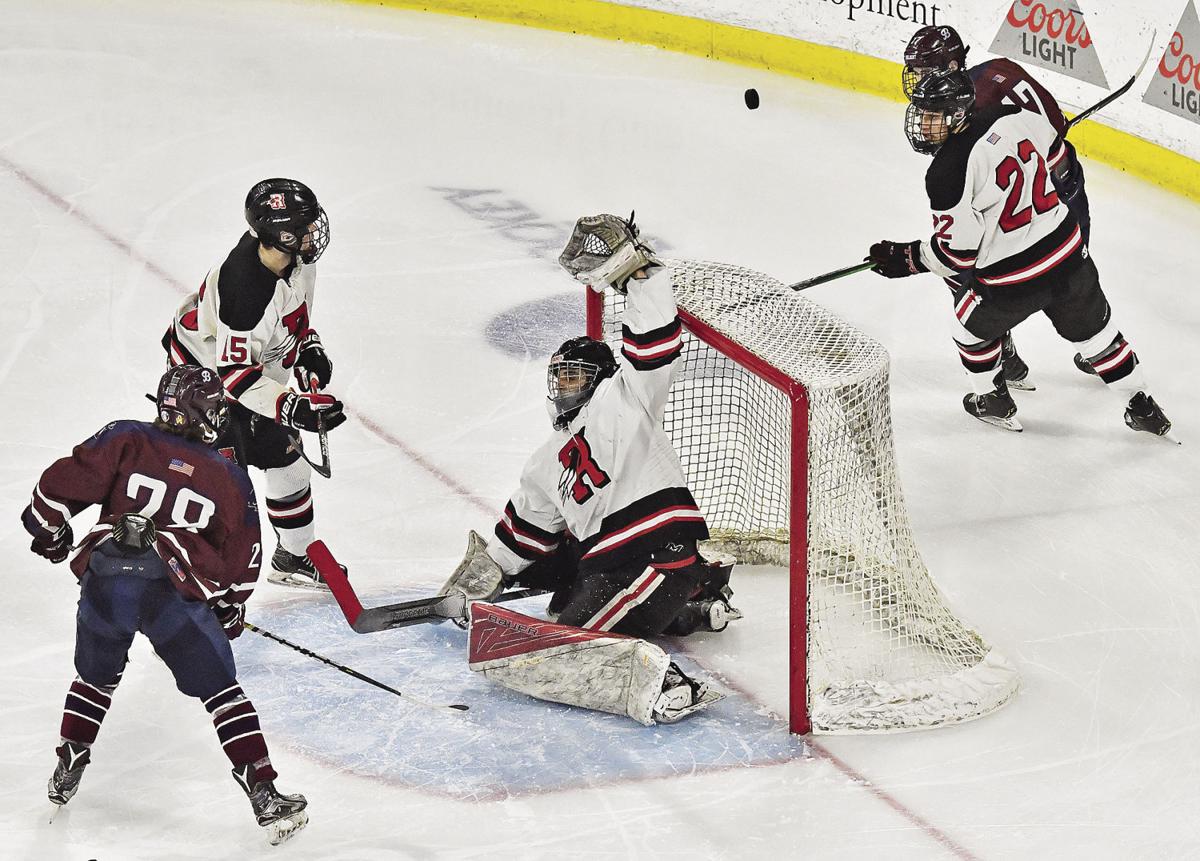 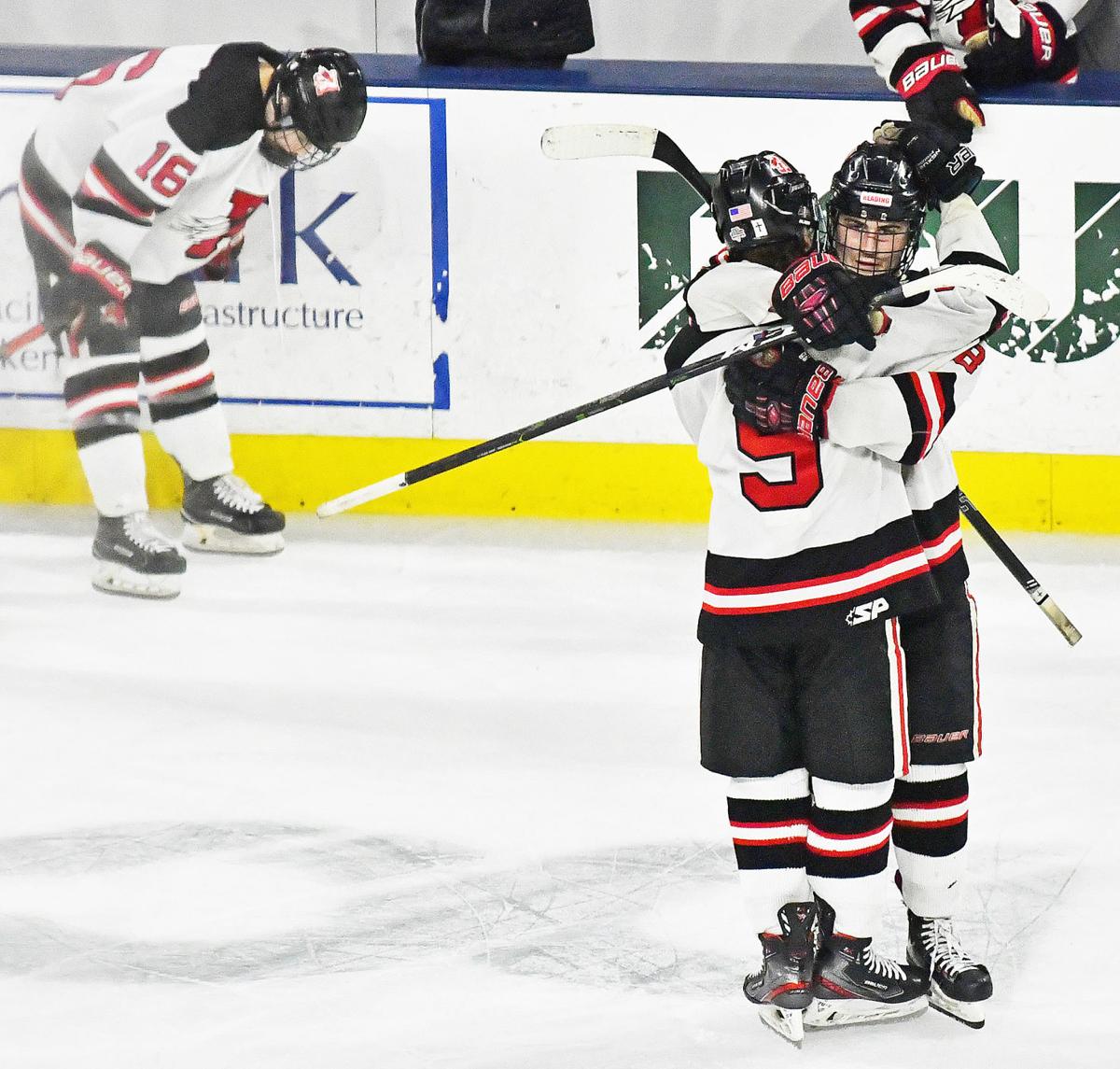 The Reading Pennucci brothers Jared (facing) and Evan (back) embrace at the end of the game as their season came to an end. In the back ground is teammate Jake Donovan. The Rockets were eliminated by Belmont, 3-2, in the MIAA Division 1 North boys hockey semifinals.

Reading's Landyn Greatorex (26) looks to score on the Belmont goalie Nico Carere late in the game but the Belmont goalie came up with the outstanding save to help preserve his team’s 3-2 upset win. The Rockets, the No. 1 seed, were defeated in the Division 1 North semifinal at Tsongas Center on Thursday. Belmont advances to meet St. John’s of Shrewsbury on Monday.

The Reading Pennucci brothers Jared (facing) and Evan (back) embrace at the end of the game as their season came to an end. In the back ground is teammate Jake Donovan. The Rockets were eliminated by Belmont, 3-2, in the MIAA Division 1 North boys hockey semifinals.

LOWELL — It is not easy to beat a good team three times in the same season and the Reading High boys hockey team found that out the hard way.

Belmont defeated Reading, 3-2, Thursday night in the MIAA Division 1 North semifinals at Tsongas Center in well-played game on both ends.

The Rockets (12-7-6) had defeated the Marauders (13-5-5) both times in two one-goal games during their two Middlesex League Liberty Division games.

With Belmont leading 1-0 heading into the third period, it was still anybody’s game. With less than five minutes to play, Reading fought back to tie the game on a goal by freshman Evan Pennucci setting it up for a what was a wild third period.

Reading’s lead was short-lived as Belmont came right back to take the lead on a Henry Stonehouse goal and a minute after that scored again on a Matty Rowan breakaway to take a 3-1 lead with under two minutes to play.

Reading did what it has done all season long and fought until the very last buzzer. With 59 seconds left to play, senior Cam Lawhorne blasted one home to pull Reading within one.

The Rockets pressured until the last second where Belmont goalie Nico Carere, who was outstanding all night, had to make the save of his life with one second left to keep his team in the lead.

“We didn’t quit all year and we didn’t quit right there,” said Reading coach Mark Doherty. “The kid [Nico Carere] made a terrific save there at the end and they have a good goalie over there. They [Belmont] are playing well right now, so give them their credit. They have done a good job over there.”

Despite Reading’s season coming to an end, the Rockets have a lot to be proud of. They played well and hard all season and Doherty is proud of his team’s fight all year.

“I won’t question the fight in this team,” said Doherty. “The second period was probably as bad as a period as we have had in a while. But, the third period we came back and kept fighting and this why you play the game. It is tough to beat someone for a third time.”

Both goalies were sharp early in this one. Reading came out in the first period and fired eight early shots on Carere to get him working early. Despite only seeing four shots in the first, Reading goalie Dylan Emery also came up big on the shots he did see.

Mid-way through the first, the Rockets had a goal disallowed as Charlie Miele fired one on net where Jake Donovan high-sticked it into the goal and it was immediately waved off.

The Rockets held the advantage in the first limiting the Marauders to only four shots on goal.

It was quite the opposite in the second period, as this time Belmont took ontrol of the game.

Emery was tested early in the second and came up with four huge saves mid-way through to keep the game scoreless.

Towards the end of the period, Belmont got its first power-play chance of the game and took advantage.

A little over a minute into the power play, senior Matt Brody put the Marauders in front after a great pass behind the net from Peter Grace.

Belmont outshot Reading 14-4 in the second period and the Rockets knew they would have to step it up in order to come back and that is exactly what they did.

Reading came out firing in the third getting some quick shots on Carere early. At 10:44 of the third period, the Rockets tied the game at one. Freshman Evan Pennucci re-directed Lawhorne’s shot to put Reading on the board in exciting fashion.

That excitement was short-lived, however, as at 12:16, the Marauders re-gained their lead on a goal by Stonehouse. Ben Fici took a shot that Emery made a great save on. The rebound came loose and Stonehouse buried the shot to give Belmont a 2-1 lead.

A little over a minute later at 13:41, Rowan stole the puck off a Reading defenseman’s stick. The Belmont forward went in on a mini breakaway and scored giving Belmont the huge insurance goal with about a minute left to play.

Just 20 seconds later, after the Rockets pulled their goalie, Lawhorne fired in a wrist-shot after a pass from Landyn Greatorex to cut Belmont’s lead in half with 59 seconds.

Reading fought until the very last second, but it unfortunately it wasn’t enough as its fine season comes to an end.

Belmont will move on to the MIAA Division 1 North final where it will take on St. John’s of Shrewsbury Monday night back at Tsongas at 7:30 p.m.