MAT CATIZONE of Woburn wrapped up his four-year college basketball career at Endicott College last winter. After being a 1000-point scorer in high school, Catizone had to adapt to his role of coming off the bench and he did so with no complaints. 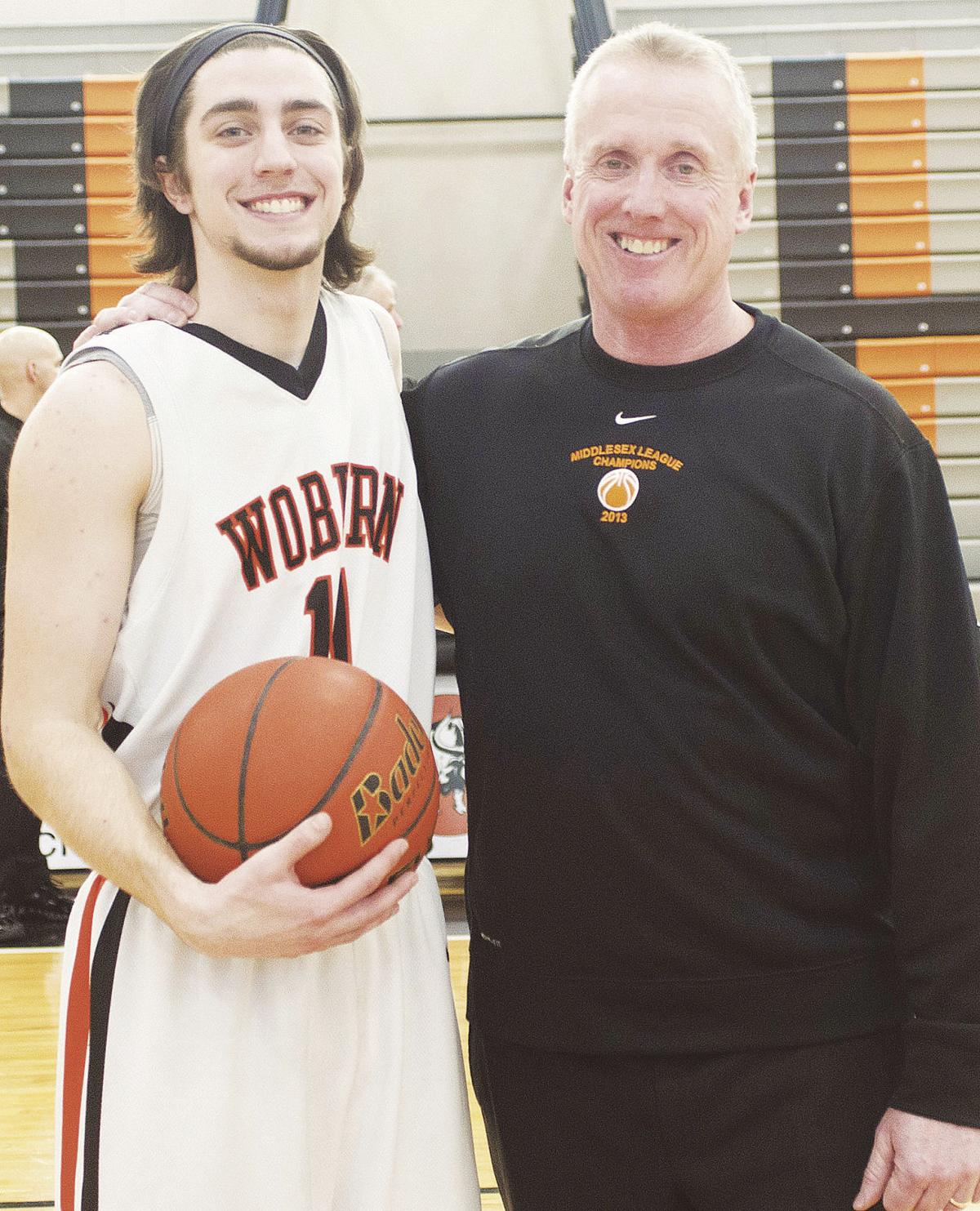 WHEN HE WASN’T ON THE FLOOR, Mat Catizone (center) was always there supporting his Endicott teammates from the bench. The Woburn standout only started three games in his career, but was a productive role player for the Gulls who are consistently one of the top teams in the Commonwealth Coast Conference and all of New England for Division 3.

MAT CATIZONE of Woburn wrapped up his four-year college basketball career at Endicott College last winter. After being a 1000-point scorer in high school, Catizone had to adapt to his role of coming off the bench and he did so with no complaints.

WHEN HE WASN’T ON THE FLOOR, Mat Catizone (center) was always there supporting his Endicott teammates from the bench. The Woburn standout only started three games in his career, but was a productive role player for the Gulls who are consistently one of the top teams in the Commonwealth Coast Conference and all of New England for Division 3.

The four-year college basketball experience for Woburn’s Mat Catizone at Endicott College went far beyond what can be gleaned from looking at box scores and statistics.

“Honestly, my four years was more about personal development and the connections I made with teammates that will be life-long connections,” said Catizone. “That was far more important than any of the basketball stuff.”

Don’t take one of Woburn High’s all-time great boys basketball players the wrong way about the playing experience, however. The 6-0 guard played quite a bit during his final three years at Endicott and was a key role player for a team that has been consistently among the best Division 3 basketball programs in New England.

Catizone’s assessment about his experience is pretty consistent with that of other high school stars who go on to play at the small college level. They soon realize this environment is quite different than high school.

It is different on the college level all around. You play more for yourself, and more importantly for your teammates, than you do for any glory for yourself, or your town, or your school. You become part of this cocoon that your college team becomes.

“At the college level you play because you really love the sport, love the grind, and love to support your teammates,” said Catizone. “It is very time consuming, pretty much year-round. But we were a very close team and I think it reflects on the court because we are always hanging out off the court. Even kids who got zero minutes were always rooting for each other.”

Catizone was an excellent high school basketball at Woburn High. He made varsity as a freshman in 2012-13 and was part of Tanner coach Tom Sullivan’s rotation from Day 1. Catizone went on to start, and star, his final three years with the Tanners where he wound up third all-time in career points with 1277 and was twice chosen a Middlesex League All-Star.

He was an excellent all-around player at both ends of the court and proved to be an extremely accurate outside shooter. He finished with 182 3-pointers (second all-time) and once made nine threes in a game during his career.

His college choices came down to Babson, Middlebury and Endicott.

Looking toward a future career in business, or more specifically finance, those three schools fit his profile. And all three had solid D-3 men’s hoop programs.

His sister Nicole, who played basketball at Arlington Catholic, also played at Endicott so that was strong consideration in his college choice having seen that environment which has a picturesque campus in Beverly.

Catizone also liked the internship program that Endicott offered. Endicott head coach Kevin Bettencourt swung his decision for his “openness during the recruiting process” about the program if Catizone chose to come.

“Mat had a very good career at Endicott and was a major contributor to our recent success,” said Bettencourt. “He was a total team-first guy and did whatever the team needed to help us win. He has basically acted as our sixth-man the past three years but often finished games for us.”

The team was coming off a 19-11 year that saw a Commonwealth Coast Conference tournament championship plus a win in the NCAA Division 3 tournament when Catizone arrived in 2016-17. The Gulls returned most of the key players from that squad that helped them go 24-7 in Catizone’s freshman year. Catizone had to bide his time that season and wait his turn.

“We had three 1000-point scorers coming back, who all had incredible success, and some had Division 2 offers coming out of high school,” said Catizone. “I knew I would have to sit and watch. It was eye-opening how competitive it was.”

EVERYONE IS A GOOD PLAYER ON A COLLEGE TEAM

What most high school stars find out very quickly when they get on a college campus, even at the Division 3 level, is the athletics are extremely competitive. Everyone was a high school star, a two-or-three-year starter, a league All-Star once or twice, and perhaps a 1000-point scorer during their high school careers. Everyone can play and you must earn your minutes.

“I thought I was a pretty good shooter and then I saw Keith Brown,” laughed Catizone about his Endicott teammate who also came to Endicott the year Catizone did.

To Catizone’s credit he adapted his own game to earn him minutes at Endicott.

“During my freshman year I worked harder on defense,” he recalled. “I realized the only way to get noticed was to shut guys down in practice. I was basically guarding two All-Americans every day in practice.”

His persistence seemed to pay off at the beginning of his sophomore year as he started the season opener against Regis. However, he hurt his Achillies during the game and it kept him out of the next seven games. When he returned he never regained his starting position but did play coming off the bench.

“I couldn’t really come back to where I was,” said Catizone, about the injury. “Maybe if I didn’t get hurt things may have been different; who knows.”

Endicott moved on during his absence and when Catizone returned he went into a different role. He only started two others games the rest of his career.

Catizone says his years playing AAU with the Middlesex Magic acclimated him to coming off the bench and playing a role on a team. It wasn’t a terribly hard adjustment.

“When I played AAU it was a very competitive environment and I had somewhat a similar role,” he said. “I got a little taste of what I was facing here (at Endicott). I pretty much knew this role.”

Catizone never came close to being the type of scorer in college as he was in high school playing bench minutes, but that sometimes is the nature of the game. There are only so many shots to go around and the players who need to shoot are the ones who do.

Catizone played in 68 games his final three seasons and averaged 14.2 minutes and 3.9 points per game. Offensively, his role was to space the floor by heading to the 3-point line and be ready to shoot when passed the ball, or look for an open cutter. Defensively he took pride on guarding the 3-point line of his opponents.

“Mat was one of the best perimeter defenders in the conference during his career,” said Bettencourt “I felt at times that he sacrificed on the offensive end but he made some really clutch shots during his career.”

This past season Catizone scored a career-high 20 points against Salve Regina and that included going 6 for 10 on 3-pointers. He scored in double figures in two other games.

“I never found an offensive rhythm,” said Catizone. “We ran a motion offense that generated team shots. Maybe I could have done a little more.”

Endicott had another fine year in 2019-20 and went 19-8. The Gulls finished their season with a 76-75 loss to their CCC rival Nichols in this year league championship game back on Feb. 29 before 2,500 at Endicott. It was the third time in four years Endicott and Nichols faced each other in the CCC championship game.

Presently Catizone is finishing up his classes remotely from home. He will have to do without Senior Week or graduation ceremonies.

“Endicott is thinking of holding graduation on Halloween,” said Catizone. “We’ll be the only class to do that so there are ways to look at it.”

A member of the Endicott Scholars and a Dean List recipient, Catizone has done internships with Century 21 Commonwealth and York County Federal Credit Union. But, a finance career is on hold until the pandemic can be straightened out.

“With the coronavirus not a lot of companies are posting jobs,” he said.

Catizone also would like to reconnect and help out with Woburn High basketball in his future.

“I really looked up to Chris Claflin and Mickel Simpson when they worked with us when I was coming up,” he said. “I would like to give back and do the same.”

As he’s proven, Mat Catizone is a welcome addition to any team.