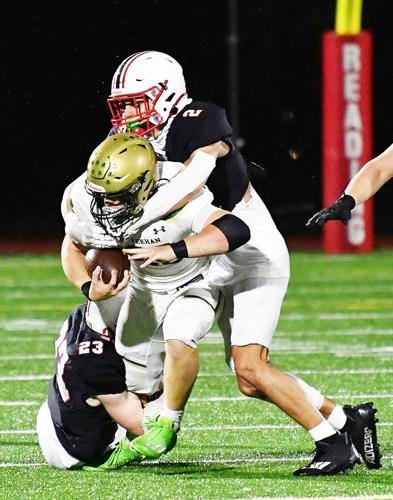 READING PLAYERS Max Leone (23) and Alex DiNapoli (2) take down Bishop Feehan’s Nick Yanchuk. The Feehan running back had a big night as he rushed 33 times for 357 yards and six touchdowns. The Shamrocks defeated the Rockets, 48-6, in the MIAA Div. 2 playoffs last Friday night at Hollingsworth Field. 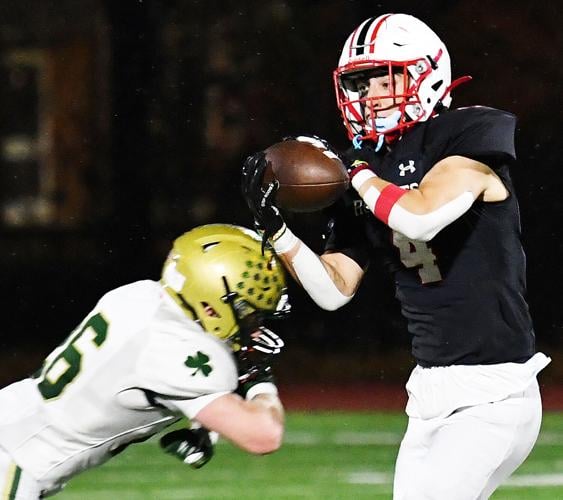 Reading's Ryan Strout makes the catch just before getting hit by Feehan's Shane Evans. The Shamrocks proved to be too tough for the Rockets as they beat them in all phases of the game last Friday, 48-6, to eliminate Reading from the playoffs. 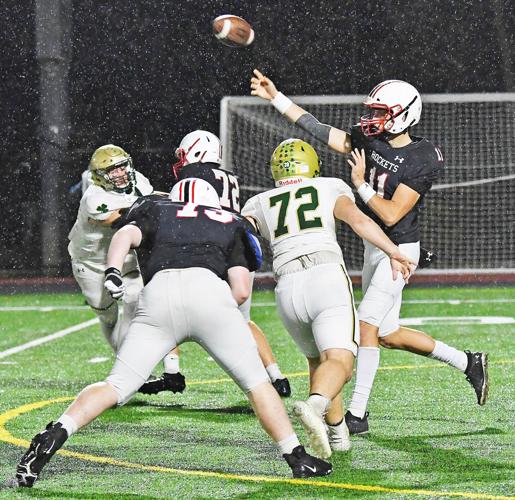 Reading quarterback James Murphy throws under pressure during Friday's loss to Bishop Feehan. The Shamrocks defense harassed Murphy and made for a tough night throwing the ball, completing just 10 of 25 passes with an interception and 112 yards and no touchdowns.

READING PLAYERS Max Leone (23) and Alex DiNapoli (2) take down Bishop Feehan’s Nick Yanchuk. The Feehan running back had a big night as he rushed 33 times for 357 yards and six touchdowns. The Shamrocks defeated the Rockets, 48-6, in the MIAA Div. 2 playoffs last Friday night at Hollingsworth Field.

Reading's Ryan Strout makes the catch just before getting hit by Feehan's Shane Evans. The Shamrocks proved to be too tough for the Rockets as they beat them in all phases of the game last Friday, 48-6, to eliminate Reading from the playoffs.

Reading quarterback James Murphy throws under pressure during Friday's loss to Bishop Feehan. The Shamrocks defense harassed Murphy and made for a tough night throwing the ball, completing just 10 of 25 passes with an interception and 112 yards and no touchdowns.

READING — One thing for certain in the MIAA football playoffs is you are always facing a good team.

The Reading High football team, although unbeaten going into Friday night’s playoff game, found that out the hard way as No. 14 seed Bishop Feehan put an abrupt end to the Rockets’ Super Bowl hopes at Hollingsworth Field.

Bishop Feehan running back Nick Yanchuk was a wrecking ball, rushing 33 times for 357 yards and six touchdowns, as the Shamrocks defeated the Rockets, 48-6, in the Round of 8.

Although Bishop Feehan (7-3) came in as the 14th seed, it took only two drives to figure out why it easily handled previously-undefeated and No. 3 seeded Peabody, last week, and then did it again to the sixth-seeded Rockets (9-1), Friday night.

The Shamrocks lost their first three games of the season, while they had some key players hurt, including Yanchuk, and they have dominated their opposition since the injured players have returned to good health.

Bishop Feehan scored once in the first quarter, twice in the second quarter and three times in the third quarter, before the game went to running time in the fourth.

"Hey, they played football very well tonight," said Reading coach John Fiore. "Hats off to Bishop Feehan. They tackled, they blocked and did everything. This one is on me. If anyone is going to point a finger, it should be pointed right at me. We got out-coached, out-physical-ed, out-everything."

The Rockets got the ball first and put together a pretty good drive. Quarterback James Murphy got first downs with his first two completions, to Alex DiNapoli for 10 yards and Jesse Doherty for 13. Another completion to Aidan Bekkenhuis for 15 got Reading into Feehan territory, and two carries by Jack Dougherty set Reading up with a first down at the 27.

That was where the drive came to a halt. Murphy was sacked twice in three plays, once by Case Mankins (son of former Patriots' offensive lineman, Logan Mankins), and once by Brendan Ross.

There was a seven-yard completion to Bekkenhuis in between the sacks, so on fourth and 10, Murphy's pass down inside the 15 went through his receiver's hands, not surprising in the steady, light rain.

Everyone who had not seen Bishop Feehan in action before got a quick lesson in how it operates. Quarterback Niko Ioveno, who attempted no passes, handed the ball off to Yanchuk, who ran between the tackles on a regular basis, setting up runs to the outside. Running backs Shane Evans and Dante Bruschi (Tedy’s son) also lined up in the backfield, and got a few touches, but mostly it was Yanchuk.

Starting from the 27, Yanchuk carried three times for 22 yards and two first downs. Bruschi got another first down with an 11-yard run, before Yanchuk ran the rest of the way, picking up the final 37 yards, including a 24-yard run for the first of his six touchdowns. Brett McCaffery kicked the first of his six successful extra point tries for a 7-0 lead with 1:45 left in the first.

Reading got a first down on its second drive on a Murphy pass to Doherty, but the drive came to a close soon after Murphy was sacked by Eddie Cinelli for a 10-yard loss.

A short punt set the Shamrocks up at the Reading 48 to start the second quarter, and Yanchuk carried the ball six consecutive times to produce a second touchdown, this one coming on a 22-yard run. The kick was blocked, as Bishop Feehan now led, 13-0, with 8:17 left before halftime.

The teams traded punts after that before the Rockets started their following drive at their 15. Alvin Day, who had a solid game with 15 carries for 74 yards, picked up 10 yards on the first play. After an incomplete pass, Murphy was sacked on consecutive plays by Tristen Upton and Mankins, leading to another of Reading's five punts.

The final Bishop Feehan drive of the half began at its 44. Four Yanchuk carries and the Shamrocks had their third touchdown, this one on a 46-yard gallop, for a 20-0 lead at the half.

Bishop Feehan got the ball to start the second half, and the Rockets really needed to stop Yanchuk right away to stay in the game.

The Shamrocks started the drive at their 23. Bruschi got the first carry for six yards, Yanchuk got the next one for three yards. On third and one, Yanchuk broke free into the secondary, racing 68 yards for a spirit-crushing touchdown and a 27-0 lead.

Reading tried the ground attack on its first drive of the third quarter, but three Day runs were only good for eight yards, and the Rockets were forced to punt from their 37.

A 40-yard Jake Palm punt put Feehan at its 23, but Yanchuk went right back to work, picking up 24 yards on the first play. Evans got the next two carries, and the second went for 25 yards to the Reading 19. Yanchuk took care of the rest, scoring on a four-yard run on his fifth consecutive carry for his fifth touchdown and a 34-0 lead with 4:12 to play in the third.

The Rockets returned to their passing game for their next drive, and marched 80 yards on nine plays for their only touchdown on the night.

Day got it started with a 10-yard draw on third and 10 for the initial first down. Murphy hit Ryan Strout for 12 yards and a first down, then found DiNapoli down the right sideline for 29 yards, to the Bishop Feehan 29.

The Shamrocks responded swiftly, but this time it was not Yanchuk. Bruschi, son of the famous Tedy, Bishop Feehan's defensive coordinator, picked up 10 yards on his first carry and then broke over the right side, got loose down the right sideline, and went 70 yards for a touchdown and a 41-6 lead with 57 seconds left in the the third quarter.

After a Reading three-and-out, Bishp Feehan started its next drive at the Rocket 45. Yanchuk went over 300 yards on his first carry. After a personal foul penalty by the Shamrocks put the ball back on their 45, they quickly recovered when Yanchuk rushed for 21 yards on his next carry. Yanchuk eventually scored his sixth touchdown on a 15-yard run with about 4:25 left on the running clock.

"They did a great job," said Fiore, of the Shamrocks. "Physically, they were at a different speed and level than us. We have to do something about that."

Bishop Feehan moves on to the Final Four, where the Shamrocks will challenge No. 2 seed King Philip.

Reading will finish its season by hosting Stoneham (9-1) on Thanksgiving Day. The Spartans, another power running team, are currently in the Div. 6 Final Four and will have a playoff game before that against Cardinal Spellman this Saturday afternoon (2:30 p.m.) at Weston.