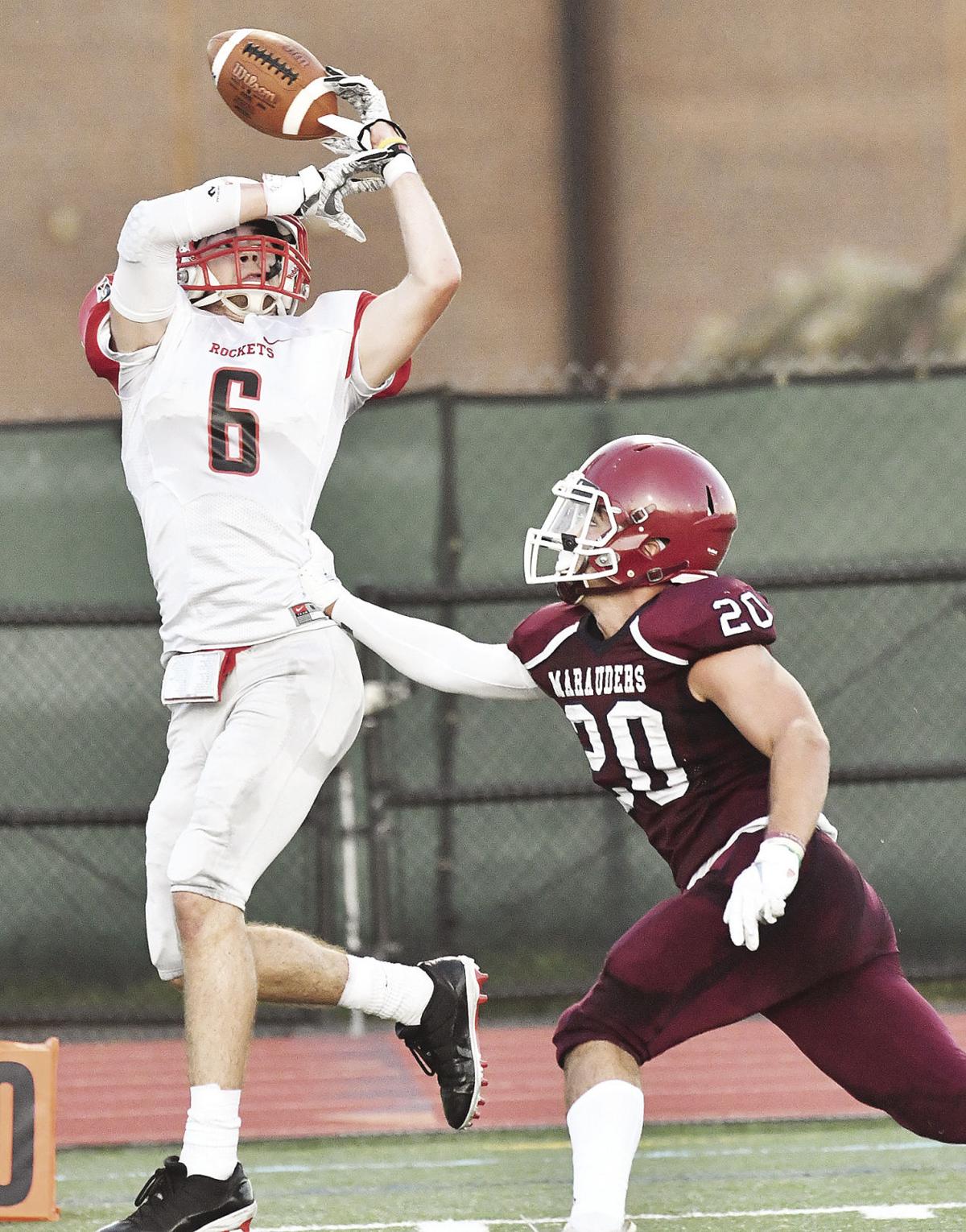 Reading's Colin DuRoss makes an attempt to catch this ball, under pressure from Belmont's Justin Rocha. The Rockets struggled with the Marauders but were able to take back a 19-16 win.

Reading's Jonathan Grady (right) holds onto the shirt of Belmont's Matt McHugh with Reading Colin Comerford moving to help. The Rockets had a tough game with the Marauders and fell behind at halftime before rallying for a 19-16 win. Reading improves to 2-1 and will host Woburn this Friday (7 p.m.) at Hollingsworth Field.

Reading's Colin DuRoss makes an attempt to catch this ball, under pressure from Belmont's Justin Rocha. The Rockets struggled with the Marauders but were able to take back a 19-16 win.

Reading's Jonathan Grady (right) holds onto the shirt of Belmont's Matt McHugh with Reading Colin Comerford moving to help. The Rockets had a tough game with the Marauders and fell behind at halftime before rallying for a 19-16 win. Reading improves to 2-1 and will host Woburn this Friday (7 p.m.) at Hollingsworth Field.

BELMONT — Prior to last Friday the Reading High football team had experienced near perfection in one contest and suffered near disaster in the other, resulting in a 1-1 start to the season.

Friday night at Harris Field in Belmont the Rockets experienced both, in the same game.

After falling behind 10-0 at halftime and getting wildly outplayed by host Belmont for 24 minutes, Reading responded in the second half with 19 unanswered points to pull out a 19-16 win over the Marauders.

Reading (2-1) has had its way with Belmont (0-2) over the years including an 11- (now 12) game win streak dating back to 2007. But the last couple years the Marauders have narrowed the gap, and Friday night it appeared that streak was in serious jeopardy.

Reading entered the halftime locker room with zero points, just two first downs, and only 30 yards of offense, including a turnover that led to a Belmont touchdown. But the Rockets responded with a dominant second half, particularly on defense. The Marauders went three-and-out on three straight possessions and managed just one second half first down until its final possession of the game.

Trailing 19-10 Belmont went on a 14-play, 75-yard drive with under five minutes to play, and an eight-yard Avery Arno to Zach Hubbard touchdown pass drew the Marauders within three (19-16) with 37 seconds left. But Reading’s Jonathan Grady recovered the onsides kick, fielding a difficult bouncing ball cleanly to put the game away.

Freshman quarterback James Murphy finished 7 of 14 passing for 99 yards and two touchdowns, including some clutch second-half throws. But he was also sacked three times and faced a lot of early adversity with Belmont’s tight coverage in the secondary.

“We kind of hit our aiming points with our offensive line, we got it moving, and Danny finished a couple of runs really nicely,” Fiore said, of the game-winning drive. “Stuff to build on here. We’re moving forward. Obviously it’s going to get tougher next week, we just have to keep growing and building as a team.”

“Football is a weird game, a couple of bounces, a couple calls go our way and it’s a really different ballgame,” he said. “All credit to Reading—we said it at halftime, coach Fiore is in there in that hockey rink with his boys reminding them of who they are, and we knew they were going to come out with a little bit of gusto, and they certainly did. We thought we weathered it pretty well, I thought we played really good defense. We just have to clean some stuff up.”

Belmont scored 10 unanswered points in a lopsided second quarter. The Marauders had Reading off-balance with a short, efficient passing game and some big run after catches, and their defense was stifling. Early in the second quarter Arno found wide receiver Preston Stephens in the flat, and the speedy wideout turned the short catch into a 54-yard gain to the Reading 36. Belmont ultimately settled for a 22-yard Hampton Trout field goal to take a 3-0 lead with 7:19 left in the quarter.

Reading forced a Belmont punt on its next possession, but muffed the kick, and the Marauders’ Cedrick Toussaint recovered at the Reading 25. Belmont cashed in on the short field with a six-yard Arno to Justin Rocha touchdown pass to take a 10-0 lead into the break.

“We made a couple adjustments coming out of Wakefield in terms of getting an understanding of our team identity and who we were. We had a little burr in our saddle. The (Daily Times Chronicle) picked us to lose this game 34-6 in case anyone was reading it,” Kumin said. “Maybe some people will start realizing that this Belmont team has a little bit of heart, a little bit of moxie. I’m excited to get into the rest of the league after our performance tonight.”

Reading’s defense eventually adjusted to Belmont’s short passing attack and forced three straight three-and-outs to open the second half. Still searching for answers on offense, the Rockets got a jumpstart midway through the third quarter with a 15-yard pass interference penalty that put them at the Belmont 42.

Facing a fourth and eight at the Belmont 40, Murphy found DuRoss on a wide receiver screen, and Reading’s senior wide receiver burst upfield for a 21-yard gain and a first down at the Belmont 19. The next play Murphy hit Pat Harrigan in the endzone for a 19-yard touchdown pass.

Belmont continued to go in reverse on its next drive. A shotgun snap sailed over Arno’s head, and Belmont’s quarterback covered up the rolling football at his own one. That forced a punt from the endzone and gave Reading starting field positon at the Belmont 41.

The Rockets took advantage of the short field with a five-play scoring drive. Belmont was hit with a second pass interference penalty on the drive and DiMare converted a third and one with a six-yard run to the Belmont 26. On the next play Murphy made a great throw to DuRoss, who beat single coverage on the sideline for a 26-yard score.

Belmont appeared to have its offense back in gear to open the fourth quarter following a 20-yard run by Chad Francis to midfield. But the Rockets’ defense stiffened to force a punt. Dom DeCreseczo had a big second down stop, and on fourth and two at the Reading 41 senior defensive tackle Chris Chiulli dropped Francis for a two-yard loss.

Reading took over on downs at its own 43 and put the game away with a five-play, 57 yard drive, all on the back of DiMare, who capped off the drive with a 34-yard touchdown run. Brendan DiSilva’s PAT made it a two-score game (19-10) with 4:49 on the clock.