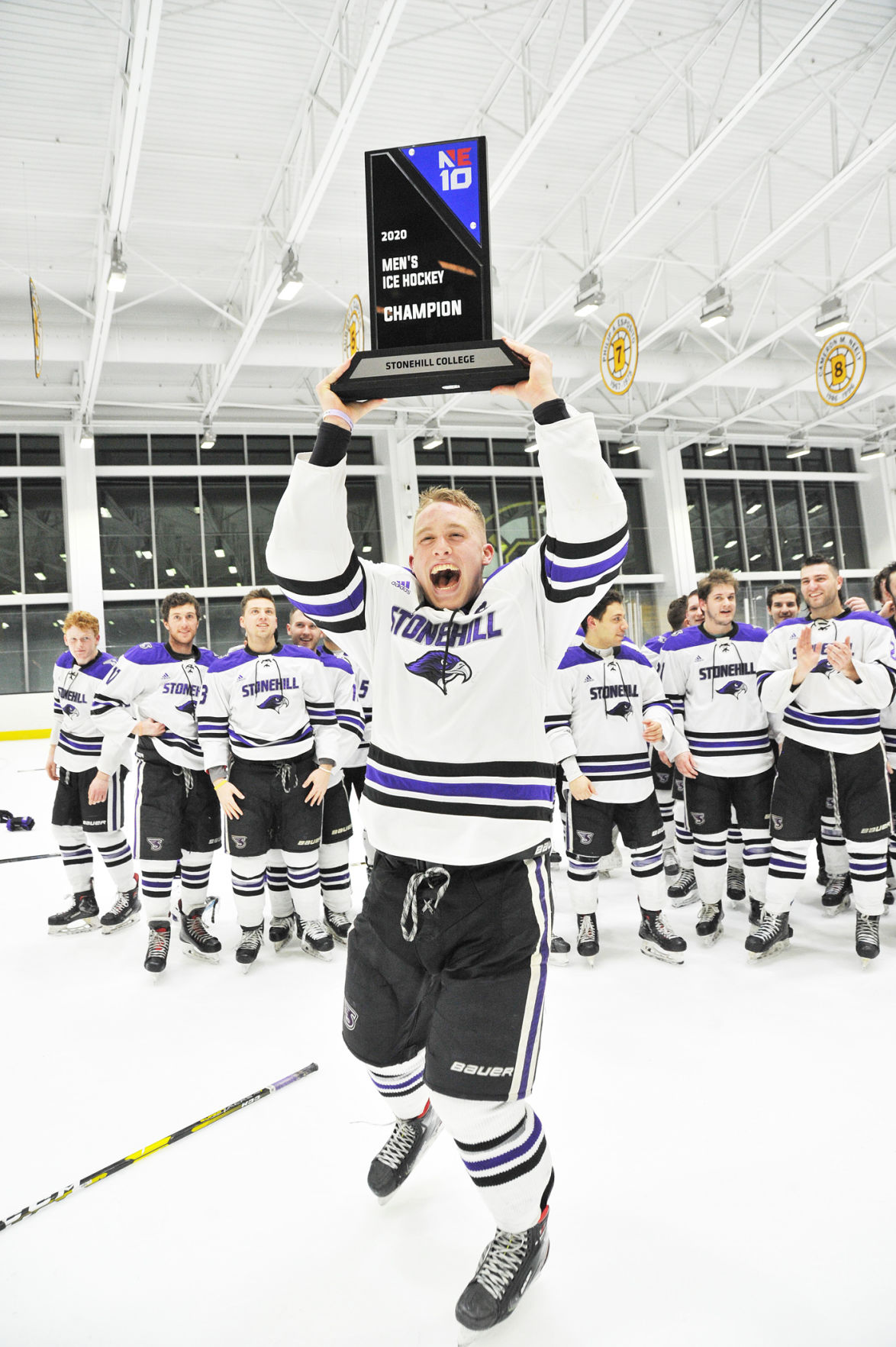 MIKE SEIBOLD of Reading finished off his hockey career as the team captain at Stonehill College that won this year’s Northeast-10 championship on March 7. 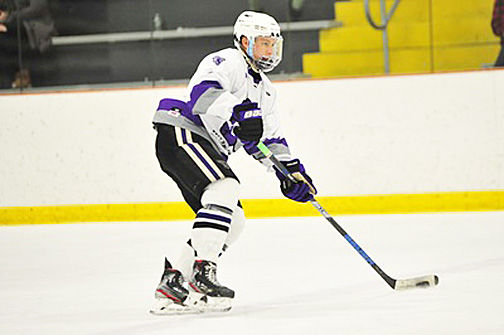 MIKE SEIBOLD was always an integral team-first, stay-at-home defenseman, for whatever team he played on. 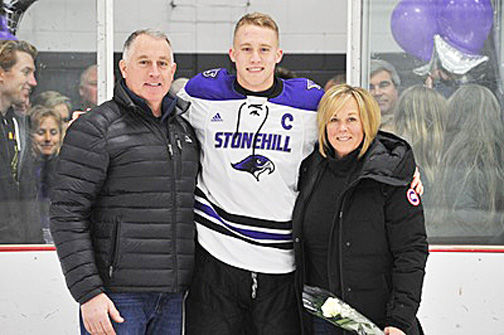 BEHIND EVERY HOCKEY PLAYER are supportive parents. Mike Seibold (middle) has father Peter (left) and mother Beverly (right) to thank for all the practices and games throughout the years. Here, they pose for a photo at this year’s Senior Night at Stonehill College where Mike Seibold of Reading was the captain of the men’s hockey team.

MIKE SEIBOLD of Reading finished off his hockey career as the team captain at Stonehill College that won this year’s Northeast-10 championship on March 7.

MIKE SEIBOLD was always an integral team-first, stay-at-home defenseman, for whatever team he played on.

BEHIND EVERY HOCKEY PLAYER are supportive parents. Mike Seibold (middle) has father Peter (left) and mother Beverly (right) to thank for all the practices and games throughout the years. Here, they pose for a photo at this year’s Senior Night at Stonehill College where Mike Seibold of Reading was the captain of the men’s hockey team.

Reading’s Mike Seibold is no different than a lot of Reading hockey players who come up through the youth hockey ranks and go on to play in high school.

Seibold grew up loving and playing the game but was not ready to give it up once high school was over. Fortunately, the 6-1, 205-pound defenseman was good enough to have some options to continue on.

Continue on he did at Stonehill College, where after a year of prep school, he landed on the Easton campus to play Division 2 college hockey.

Four years later, Seibold went out as a champion. He was the lone captain of the Northeast-10 tournament champions who took home the title on Saturday, March 7 with a 3-1 win over Franklin Pierce at Warrior Ice Arena, the practice home of the Boston Bruins.

"As a coach I could not ask for a better team captain and leader," said Stonehill coach David Borges. "Mike was an extension of the coaching staff and was a driving force behind our NE-10 Championship. He will be missed not only as a player but as a great person."

Now 23 years old and with plenty of youth, high school, prep and college hockey experience behind him, it was the perfect way to cap off his organized hockey career.

“That was the best way to end it,” said Seibold. “It was also the last weekend where they did any sports (prior to the pandemic). It was the perfect way for it to end. It made all those years I’ve played worth it.”

Seibold’s prior three years-plus at Stonehill sort of came and went without much notice and very little fanfare. When you go 9-14-4, 7-16-2 and 8-17-1 there isn’t much, as they say, to write about.

The Skyhawks even went into this year’s winter break 1-7-1 and appeared headed no where fast. Then miraculously they went on to finish 12-4-4 including a finishing nine-game stretch where they went 7-1-1 to hoist the championship trophy.

“I think everyone just got tired of looking for someone to blame,” said Seibold when asked to explain the turnaround. “Everyone decided to be more accountable to themselves and the entire mindset changed in the second half.”

At Reading High, Seibold was a two-time All-Scholastic and All-League defenseman. He was a key component in the 2014 Reading High team’s run to the Division 1 state championship in his junior year, earning him the first of his two All-Scholastic honors. The Rockets were seeded 12th in Division 1 North and were able to upset every team they faced throughout the tournament and closed it out with a 4-1 win over Braintree at the TD Garden for the state title.

His twin sister Danielle was a forward on the Reading High girls team that won the Division 1 state championship in 2015. Younger sisters Caroline (Wesleyan) and Jenna (Lawrence Academy) also play.

If you simply go by a box score you may not notice Mike Seibold. But, if you witness a game that Seibold played in, you can’t help but notice him. He is a true team player and is a very take-charge, quarterback-like defenseman, always talking and instructing on player movements. If you were to construct a hockey team, a “Mike Seibold-type player” would be high on your list of building blocks.

"Mike's communication with his teammates was demanding but never degrading and he was always about the team," said Borges. "He would continuously echo and reinforce the values and philosophies that we, as coaches, thought were important to our team’s success."

For most of his career on the blue line, Seibold was content to simply take care of his own end and he certainly did just that. The game of hockey to him was more about preventing goals than scoring them. And he is OK with being classified as a “stay-at-home defenseman.”

“That really always has been my style,” he said. “I like to compete defensively, and except for my junior year in high school, that was the only year I was looking for offense. But, other than that I get back to what I am more comfortable with.”

Career-wise at Stonehill his scoring line is an underwhelming one goal with 19 assists for 20 points. To his credit, he plays physical and clean and doesn’t take unnecessary penalties. A more telling stat for Seibold was playing in over 100 career games (102), meaning he wound up playing early and avoided inconsistent play and injury, to show up to play for each game.

"Mike is one of the most intense competitors that I have ever coached," said Borges. "His work ethic, leadership and desire to constantly improve made him a great teammate and leader. Even as freshman Mike displayed leadership qualities that I knew would eventually make him a great captain later in his Stonehill career."

The one career goal came in the final game of his junior year in the 2018-19 season in Bryn Athyn, Pennsylvania. Folks around here may have to check Google Maps to find where that is.

“I scored it in an outdoor rink,” said Seibold recalling the goal. “Actually it had a roof, but no walls. We weren’t going to make the (NE-10) playoffs and a lot of kids were disinterested. I shot it and didn’t see it go in, but it did.”

Seibold also earned an assist in the game, but Stonehill wound up losing, 6-5.

The road to get to where he was able to hoist the championship trophy had many turns in it.

After high school if you want to eventually play college hockey you either have to go to prep school or play junior hockey. No one really skates into college hockey right out of high school any more. Seibold chose a post-graduate year at Williston Northampton.

“I do think it is a little crazy that you just can’t play college hockey right out of high school, but for me I was glad I PG’d instead of just a year of hockey,” he said. “To have that one year where I had to go away it gave me a chance to grow in the classroom and develop physically.”

At Williston he grew an inch-and-a-half and put on 25 pounds.

In prep, or private schools, they require you to take an after-school activity. He was able to do weight lifting with a strength trainer in the fall, play hockey in the winter, and then proudly states he played JV tennis in the spring.

He chose Stonehill where he quickly became a regular on the blue line for the Skyhawks. Still it was tough without much on-ice success.

“Hockey was a way to get through school,” said Seibold. “I knew I was there for a reason and I did that extra year of high school.”

Stonehill plays in the only Division 2 college league in the country. Other programs are either Division 1 or Division 3. As a D-2 program there is certainly good talent.

“I like how everyone played, there really wasn’t a weakling in the program,” recalled Seibold of his first experience to a college practice. “Everyone there was usually ‘the guy’ on their high school team so figuring out what everyone does well usually results in where they fit in.”

There were 12 seniors who went all four years at Stonehill so that helped breed some familiarity with the team.

“We all lived together and were around each other a lot so you knew kids’ tendencies,” he said.

As a senior, Seibold is in the same situation as every graduating college, or high school, senior with no graduation ceremonies or special “Senior Weeks.”

“It is tough to go four years and not have a graduation,” he said. “There was a week down the Cape between the last days of classes and graduation that I was looking forward to that we miss. We may have graduation in August, but no one is really sure.”

One thing that is quite different with Mike Seibold than most of the other current graduating seniors is he isn’t sleeping in, putting the job search on hold, while the pandemic sorts itself out.

A criminology major, and a NE-10 commissioner’s honor roll student, he has taken the police exam, but for now he will continue to get up at 5 a.m. to help work in his father Peter’s fence company (Seibold Fence Contracting).

Proving once again what a true team player he is.