WOBURN PLAYERS Rocco Gomes (4) and Gabriel Pinto (2) go up for a header on a corner kick that Pinto was able to redirect the ball and get in the net past Reading goalie Eric Pettorossi for the only goal of the game on Wednesday night in the boys soccer game at Hollingsworth Field. Woburn won, 1-0. 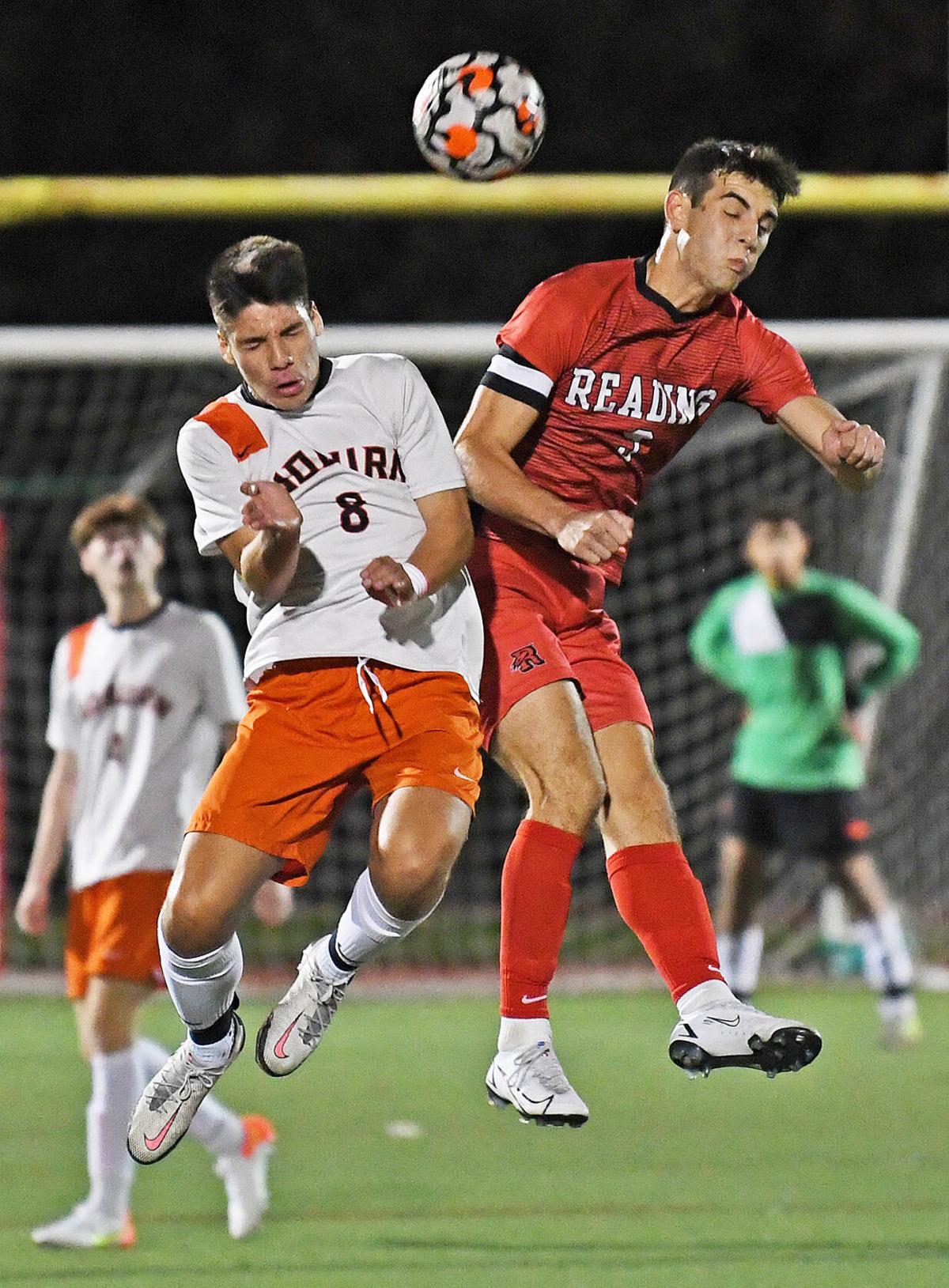 WOBURN PLAYERS Rocco Gomes (4) and Gabriel Pinto (2) go up for a header on a corner kick that Pinto was able to redirect the ball and get in the net past Reading goalie Eric Pettorossi for the only goal of the game on Wednesday night in the boys soccer game at Hollingsworth Field. Woburn won, 1-0.

READING — The Woburn High boys' soccer team avenged one of its three losses this season with a 1-0 victory over Reading, Wednesday night, at Hollingsworth Field.

The Tanners (7-3-3) extended their unbeaten streak to six (5-0-1) and have basically clinched their spot in the state tournament.

The Rockets (10-2-1) dropped out of their first-place tie with Arlington, but only by a point, as the Spy Ponders were tied by Lexington, Wednesday afternoon.

"The better team won, simply put," said Reading coach Dan McGrath. "We came out flat in the first half and were just out of sorts. They came in and played well for 80 minutes. They put us under pressure and they were the better team."

The only goal of the game came midway through the first half, off a corner kick. Gabe Pinto headed in a kick from the right corner by Matheus Donascimento, in the 20th minute.

"We had like three or four corner kicks in a row, one of which was a great corner kick to the back post, and Gabe Pinto missed it," said Gomes. "The next one comes up and he smacks it home. He was wide open on the first one and on this one he had a man on him and he headed it in. It was beautiful."

After getting scored on three times in the first meeting, Woburn had a game plan this time around. The idea was to not allow Reading's top two players, Ryan Connolly and Matt Geraghty from getting into their offense. A shutout for goalie Bryan Santos is evidence the strategy was successful.

"I thought we controlled the game for the most part, but Ryan (Connolly) is such a tough player up top, he just beats us up," said Gomes. "He's so strong, so we focused on not letting him turn. That was our main focus, defensively, and obviously keeping a clean sheet was fantastic. Not allowing him to turn and Geraghty, their other superstar, trying to limit his touches and make him move the ball a little quicker, not allowing him to feed Ryan."

"We couldn't quite settle down enough to string too much together, offensively," said McGrath. "Woburn has been playing as well as anybody, and we knew that. We definitely didn't play well enough to win, which is unfortunate."

The Rockets did have some transition opportunities, but they had trouble setting up the finishing touches for them. Woburn did well to have defenders attacking the Reading players attempting to make the entry passes and crowding up the middle, not leaving much opportunity for the Rocket players to maneuver.

"I was really proud of the way they worked," said Gomes. "Matheus (Oliveira) in the middle, Mike in the middle was fantastic. Our two center backs, Rocco (Gomes) and Will (Comeiro) were just animals. They are tough to play against, that's just the way they are, and then Diogo (Malmonge) on right middie was just awesome. Our midfield was really strong today. They limited their chances to get the ball into their strikers, which was huge."

The best chance for a Reading goal in the second half came in the latter stages, when Connolly made a nice play off a free kick, heading a ball from the right side off the near post, with the ball deflecting out of play.

"We had a couple good chances in the first half, but once we got the goal, we clamped down on them," said Gomes. "They still had one great chance in the end, with the header off the post."

Woburn will try and avenge its last loss on Friday (4 p.m.) when it hosts Lexington. Reading will be looking to stay a point behind Arlington when it plays Belmont, Friday night (7:30 p.m.) at Harris Field.