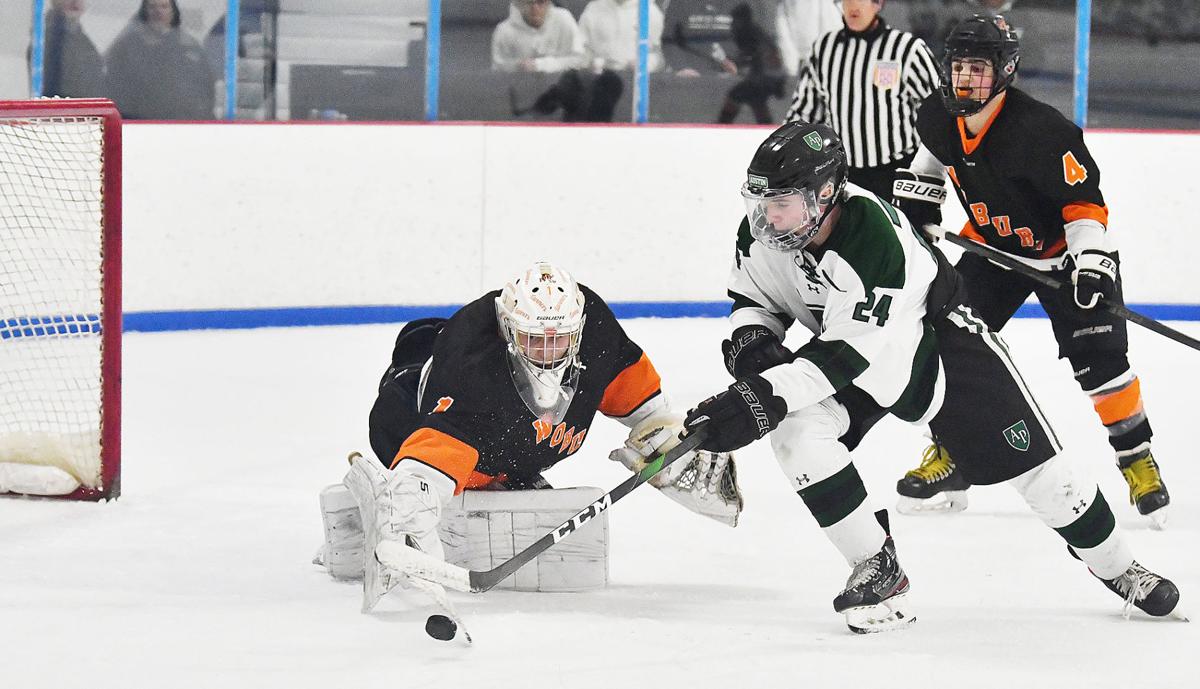 Woburn goalie Kevin Burkett gets a stick on the puck just ahead of Austin Prep’s Matt Chatelle with Woburn Nick Leuzzi following the play. The Tanners saw a 2-1 lead after two periods slip away as Austin Prep rallied in the third period for two goals to take a 3-2 victory in a Division 1 North first round game at Stoneham Arena.

Woburn's Lance Anderson is hauled down by Austin Prep's Robby McDonald. No penalty was called.

Woburn goalie Kevin Burkett gets a stick on the puck just ahead of Austin Prep’s Matt Chatelle with Woburn Nick Leuzzi following the play. The Tanners saw a 2-1 lead after two periods slip away as Austin Prep rallied in the third period for two goals to take a 3-2 victory in a Division 1 North first round game at Stoneham Arena.

Woburn's Lance Anderson is hauled down by Austin Prep's Robby McDonald. No penalty was called.

STONEHAM — For the longest time in last night’s MIAA Div. 1 North boys’ hockey game, it seemed the Woburn High boys’ hockey team might pull off one of those improbable victories where the goalie is fantastic and the offense does just enough to enable the upset.

Austin Prep played along until the third period, when it scored two goals to turn a 2-1 deficit into a 3-2 triumph, in a first round game, at Stoneham Arena. The Cougars (11-7-4) advance to face No. 1 seed Reading on Saturday (3 p.m.) at O'Brien Rink in Woburn in the quarterfinals.

The ninth-seed Tanners were unable to pull out the win against the eighth-seeded Cougars, but Woburn coach Jim Duran was proud of the progress the team made throughout the campaign.

“We had seven freshmen, and a lot of them contributed this year,” said Duran. “We came a long way, we wish we could have kept going, but I thought we played one of our better games tonight. Austin Prep was better.”

The Cougars held an edge in play throughout, as the young Tanner defense had trouble keeping up with the speedy Austin forwards.

The Cougars had a 7-1 shot advantage when the Tanners struck suddenly. Lance Anderson blocked a shot by the defenseman at the left point and was able to get to the puck in stride, going in on a clean breakaway. Anderson came in down the right side, skated towards the middle, and then beat Austin goalie Andrew MacDonald with a wrist shot inside the right post.

“Early on, Kevin kept us in the game with some huge saves,” said Duran. “After one save, we turned around and went down the other end and scored.

It looked like Woburn might not only win the first period, but maybe even adding to its lead when it went on a power play at 11:22. After some initial pressure, the puck was sent down the other end of the ice. The Tanner defense was unable to get the puck back up ice.

Cougar forechecker Nolan Ricci stole the puck, took it around the back of the net and back out the right side. Burkett stuffed his initial shot, but Ricci had enough time to collect us own rebound and fire the puck over Burkett and into the left side of the net to tie game at 1-1.

The Tanners came out stronger in the second period and actually held the edge in play over the first five minutes. During that time, Woburn managed to score again to take a 2-1 lead.

Jonathan Surrette and Anderson were grinding in the corners with a couple Cougars, when Surrette suddenly emerged from the right corner. Surrette got off a quick wrist shot that beat MacDonald short-side.

As the period went on, Austin Prep slowly took the momentum back and went about pouring more shots on Burkett. After making 12 saves in the second period, Burket made 14 more in the second for a total of 26.

The Tanners had a great chance on a transition rush to take a possible two-goal lead. Woburn had a two-on-one break when Connor Power flipped the puck over a Cougar defeneseman’s stick to an open Surrette skating through the left circle.

Instead of going with the shot, Surrette made a clever pass back to Powers who was skating towards the right post. Powers might not have expected that play, as his attempt to redirect the puck inside the post went just wide to the right.

As expected, with their tournament lives at stake, the Cougars went right to work in the third period, putting pressure on the defense right away. During one flurry, a rebound went to the left, where freshman Jack Farrell was able to fire the puck into an open left side of the net.

Woburn killed off a penalty midway through the third, and both teams had their chances to get the go-ahead goal. Austin Prep got the chance it needed when Brady McGrath stole the puck from a Tanner defenseman and beat Burkett with just 2:23 to go.

There were chances for Woburn in the last two minutes, but the Tanners were unable to cash in on any of them.

“It was just a great effort with great leadership all year from our two seniors, and our two junior captains,” said Duran. “We couldn’t have asked for anything more.”

Woburn will lose Burkett and defenseman Joey Guarino, but the Tanners could have everybody else back, provided there are no defections to private schools.

Duran hopes every one comes back so they can make a run at another tournament bid, and perhaps the Middlesex League Liberty title.