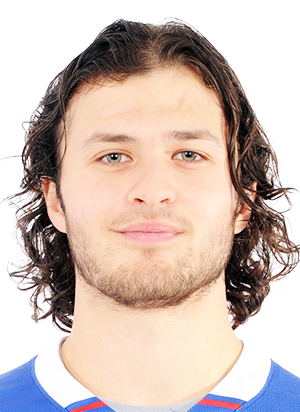 DAN COZZI had such a knack for setting up his teammates for goals at UMass Lowell that he ranked eighth nationally a year ago with a high of 2.7 assists per game. 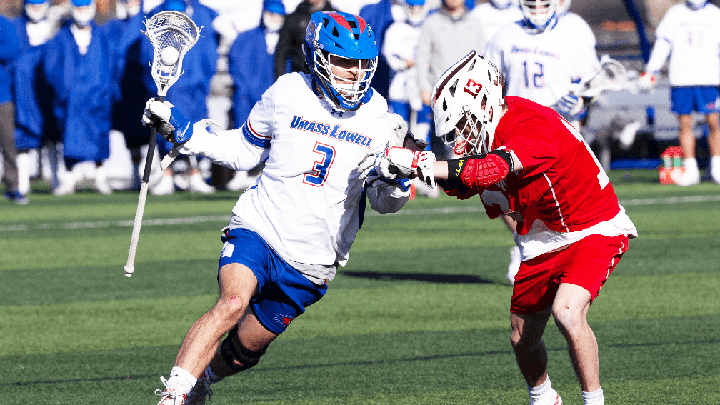 DAN COZZI cuts through the midfield while fighting off a defender during a game from 2019 for the UMass Lowell men’s lacrosse team. The Reading High standout has had a fine career for the River Hawks. However, his senior season was cut short due to the COVID-19 pandemic. Cozzi is weighing his options about playing again next year since the NCAA did grant an extra year of eligibility to the spring sport athletes who were affected by the shutdown.

DAN COZZI had such a knack for setting up his teammates for goals at UMass Lowell that he ranked eighth nationally a year ago with a high of 2.7 assists per game.

DAN COZZI cuts through the midfield while fighting off a defender during a game from 2019 for the UMass Lowell men’s lacrosse team. The Reading High standout has had a fine career for the River Hawks. However, his senior season was cut short due to the COVID-19 pandemic. Cozzi is weighing his options about playing again next year since the NCAA did grant an extra year of eligibility to the spring sport athletes who were affected by the shutdown.

With live sporting events coming to a literal stop nearly worldwide, there are a lot of people in positions right now that they are not used to being in the middle of April.

Count former Reading High lacrosse star, Dan Cozzi, among the local athletes as he contemplates his next move following the cancelling of his senior season at UMass Lowell in mid-March.

Cozzi, who has picked up where he left off in Reading with the River Hawks at the NCAA Div. 1 collegiate level, still has an extra year of eligibility with the loss of this season.

After graduation, next month, Cozzi will have a degree in psychology and where to pursue his master’s is among the factors while contemplating whether to stay at UMass Lowell or go elsewhere.

“I’m weighing all my options,” said the talented midfielder.

Cozzi completed an outstanding career with the Rockets as the program’s second all-time leading scorer with 364 points, second only to Jim Queeney (392).

After graduating in 2016, Cozzi moved on to UMass Lowell, and he found the high quality of lacrosse Reading played with and against in high school paid dividends in Div. 1 college.

“It was a pretty easy transition for me because Reading had an elite program,” said Cozzi. “That and being surrounded by the Tobin Brothers, (Jack) Geiger and a bunch of other great players on defense had me well prepared.”

Education was Cozzi’s first priority when he chose UMass Lowell and it was balancing his studies while competing for a Div. 1 program that presented the challenges, freshman year.

“I had to find a balance between practicing, film sessions and classes,” said Cozzi. “My coach takes academics seriously and that was one of the reasons I chose to go there, and that was my main focus.”

On the field, Cozzi paid his dues that first year, eventually playing in six games and making it into the starting lineup for two of the final three games. Cozzi had five goals and two assists, including his first two goals against Dartmouth, and two more goals against Stony Brook.

“The Division 1 college level was very fast and very competitive,” said Cozzi. “The workload to try and get a position was heavy.”

Cozzi played attack in high school, and again as a freshman in college, but he transitioned to midfield as a sophomore when a starting spot opened up in the River Hawk lineup.

“I was putting in the work in the offseason in the weight room, and practicing my shots,” said Cozzi, whose father Ray played lacrosse at UMass Amherst. “When the midfield spot opened up, I took it, and the transition went really well.”

UMass Lowell had its best season during that sophomore season, going 8-8 on the regular season and qualifying for the America East playoffs. Cozzi still had his potent shots, but he also became a setup machine, scoring eight goals and assisting on 15 others for 23 points in 16 games played.

Cozzi had a career-best game against Hartford, scoring twice and garnering five assists for seven points. The five assists in a game was the team-high for the season. He also earned his first America East Offensive Player of the Week honor.

Similarly to his years with the Rockets, Cozzi credited his success as a sophomore to having a lot of talented players surrounding him on the field.

Junior year, UMass-Lowell just missed the playoffs, but Cozzi upgraded his game to become the second-leading scorer on the River Hawks, with seven goals and 30 assists for 37 points in just 11 games.

That helped Cozzi earn America East First Team All-Conference. His 2.7 assists a game ranked him best in America East and eighth nationally in Div. 1. He had three or more points in seven games and once again earned Offensive Player of the Week following a seven-point game (2-5) against Stony Brook.

This year UMass Lowell was 3-4 when the season came to a halt right before the America East opener. Cozzi, who netted his first hat trick in a 16-15 victory over Siena, thought the team was headed to a great season when the COVID-19 pandemic set in.

Among the factors that will influence Cozzi’s decision on where to play, next year, is available scholarship money. The halted season creates a headache for the River Hawks as they have to figure out how to work this year’s top seniors into next year’s lineup, which was already pretty much figured out. Cozzi also put his name into the transfer portal, to see what other schools have to offer.

As most know, there is time to consider all the angles, and in the meantime, Cozzi is treating his current situation like an extended offseason, lifting weights and perfecting his skills.