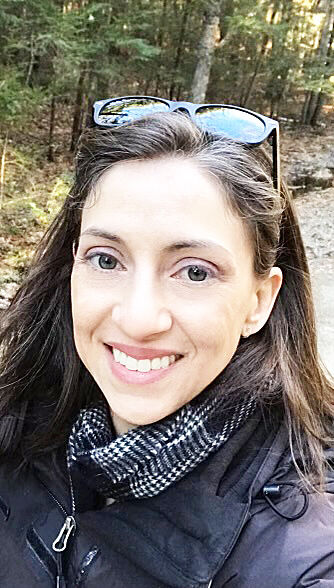 ERICA SANCHEZ hopes to open a new chapter in her life as she leaves as trainer of Reading High athletics after 15 years. 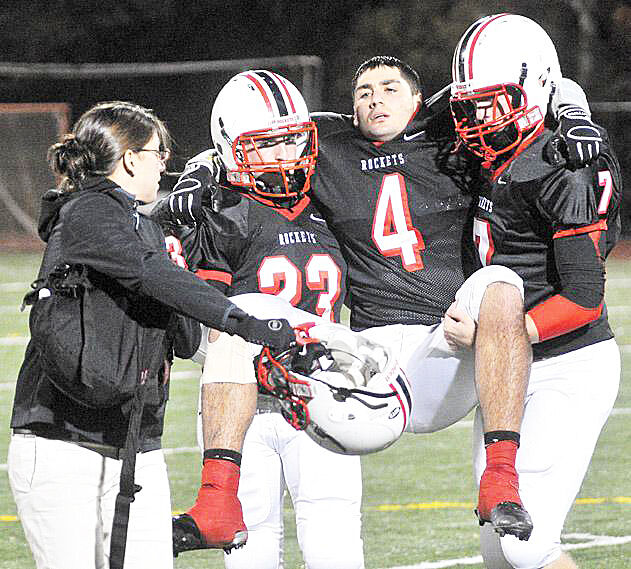 ERICA SANCHEZ (left) attends to Reading High football player Tino Perrina (4) after the star running back injured his knee in a game from 2009. Sanchez always tried to display a calm demeanor to reassure injured athletes during her 15 years as RMHS athletic trainer.(Photo by Joe Brown Photos.com)

ERICA SANCHEZ hopes to open a new chapter in her life as she leaves as trainer of Reading High athletics after 15 years.

ERICA SANCHEZ (left) attends to Reading High football player Tino Perrina (4) after the star running back injured his knee in a game from 2009. Sanchez always tried to display a calm demeanor to reassure injured athletes during her 15 years as RMHS athletic trainer.(Photo by Joe Brown Photos.com)

READING — Erica Sanchez dedicated over a third of her life to the Reading Memorial High School Athletic Community. As the school’s athletic trainer, Sanchez often witnessed the joys of victory and the agony of defeats along her 15-year journey.

Sanchez, who taped up and worked with injured athletes during her tenure, has decided to step away from her position.

Currently, Sanchez, 39, is in the process of relocating back to her hometown of Brunswick, Maine, where she’ll aim to focus her attention on her family.

Since 2006, Sanchez has been a staple hold for the athletic teams throughout the school year, while compiling seven state title rings. While Sanchez will certainly miss the working relationships she’s developed throughout the years, she also realizes that it’s time to open a new part of her chapter.

“I’m definitely going to miss being around the athletes, the coaches and the teachers at Reading,’’ said Sanchez. “I’ve developed so many relationships with the community over the years and the Reading Community has been my adoptive second family. At the same time, I just feel like it’s time for me to take my life in a new direction.”

Sanchez, who is the aunt of a three-year-old niece and an eight-year-old nephew, plans on spending some quality time in her hometown as the COVID-19 pandemic appears to be winding down.

“I’m looking forward to spending time with my niece and nephew as well as the rest of my family,’’ said Sanchez. “With COVID-19, I haven’t seen much of them in almost a year and it’s been very hard being in quarantine for so long. I’m looking forward to a new change in my life, but at the same time I’m going to miss everyone here at Reading.”

After graduating high school in Brunswick, Maine, Sanchez earned her undergraduate degree in Athletic Training at Endicott College in 2004. She briefly worked as an athletic trainer at Hamilton-Wenham before accepting the positon in September of 2006 at RMHS.

“I remember I was so excited to come to Reading and be the athletic trainer,’’ said Sanchez. “I knew they had such a rich tradition in sports, and it was just a huge community. I remember the administration, the coaches and the athletes welcomed me with open arms.”

She earned her first ring in March of 2008 as the Reading High boys’ hockey team became the first public high school to claim the Super 8 title.

“That was an incredible experience,’’ said Sanchez. “When I first went into the TD Garden, I remember saying to myself that I’m at the same area where the Boston Bruins play. It was just an amazing feeling and then to see the kids win the state title was just awesome. I was so grateful that I was able to witness and be a part of their successes.”

Sanchez also recalled the Rockets’ Division 2 Super Bowl winning team of 2009 at Gillette Stadium. The Super Bowl title was personal to Sanchez and the Rockets following the death of former player and then assistant coach Mike Boyd.

“The 2009 Super Bowl team was also very special to me, because it was right after Mike Boyd (passed away),’’ said Sanchez. “Everyone rallied around (Mike Boyd) and his family that season, and to win the Super Bowl at Gillette Stadium where Tom Brady played was just another amazing feeling and I was able to just take it all in.”

Sanchez also worked with the 2012 Division 2 Reading High girls’ state basketball team under then coach Kim Penney. She also was as the trainer for the 2012 football team, that Division 2 Super Bowl title team.

“Winning state titles in the Garden, was just an unbelievable experience for me,’’ said Sanchez. “Everyone really made me feel like I was part of their family from the parents, coaches and the athletes.”

While working with seven state title teams will be something Sanchez will always remember, it’s the relationships she’s developed over the years that she’ll miss the most.

“Winning the hardware is great, but I’m going to miss the bonding I developed with all the athletes I helped over the years,’’ said Sanchez. “I’ll always remember going in on Saturday mornings and taping athletes up before a football game or a huge tournament game. Even though I’ve been a part of successful teams, I’ll also remember the times where teams have had heartbreaking losses in the tournament and just being there for them.”

Sanchez always tried to convey a calm demeanor whenever an athlete experienced an on-field injury.

“Whenever I saw an athlete suffer an injury on the field, I was always calm, cool and collective,’’ said Sanchez. “It’s always tough to see an athlete get hurt and be carried off the field to the sidelines or in an ambulance. You have to have a calm demeanor, and be reassuring with family members.”

Another experience that Sanchez will remember is working with coaches and faculty members, who she once treated as athletes early in her tenure at RMHS.

“(Pat Mahoney) was one of the first athletes I’ve ever worked with when I came to Reading,’’ said Sanchez. “He’s now a (baseball and football) coach at Reading and it was a surreal experience for me. There are also other athletes that I’ve once worked with, that have grown up and have careers and families of their own. It’s such a great feeling watching these athletes you’ve worked with develop their own careers and families.”

Currently, Sanchez is weighing her career options and tentatively plans on continuing her athletic training career in Maine.

“I’m looking forward to moving on to the next chapter in my life,’’ said Sanchez. “At the same time, I’ll never forget the times I had here in Reading. The Reading Athletic Community will always be a huge part of my life.”