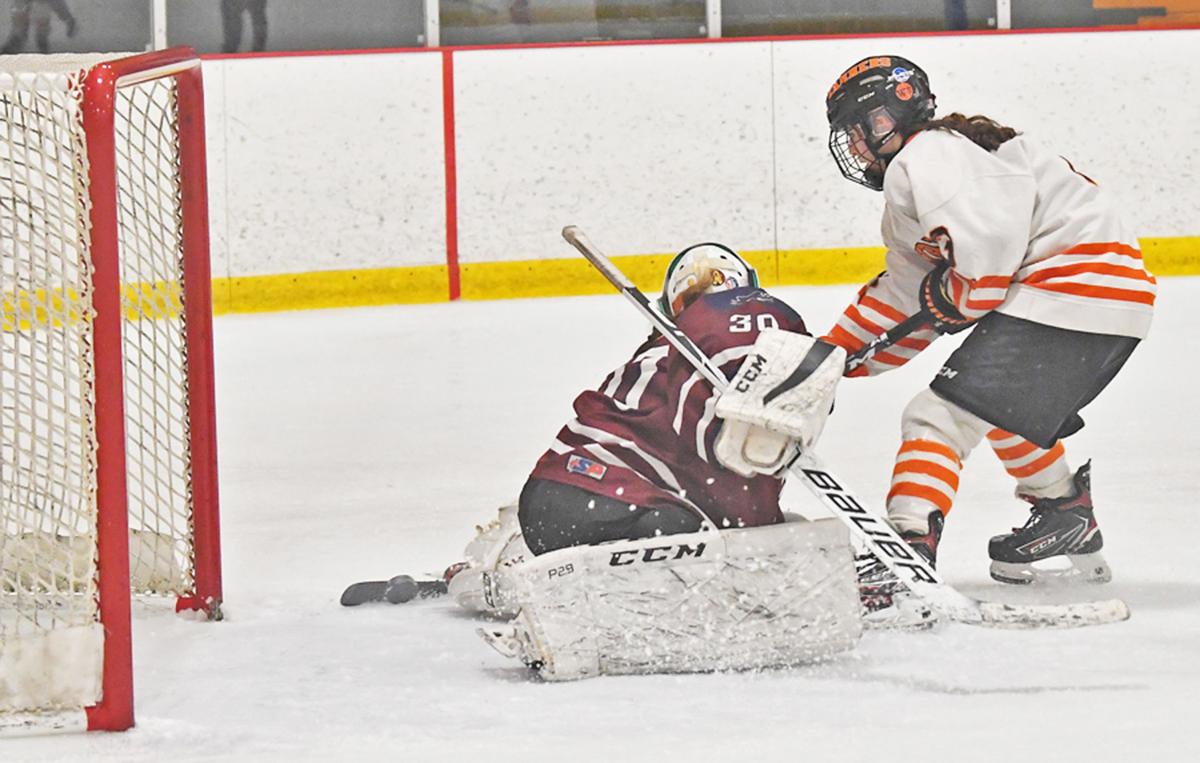 WOBURN’S ANGELINA DIGIROLAMO puts one past Belmont goalie Bridgette Gray during her team’s onslaught in Saturday’s girls hockey game at O’Brien Rink. The Tanner girls scored four times in the second period and three in the third to skate away from the Lady Marauders, 8-3. 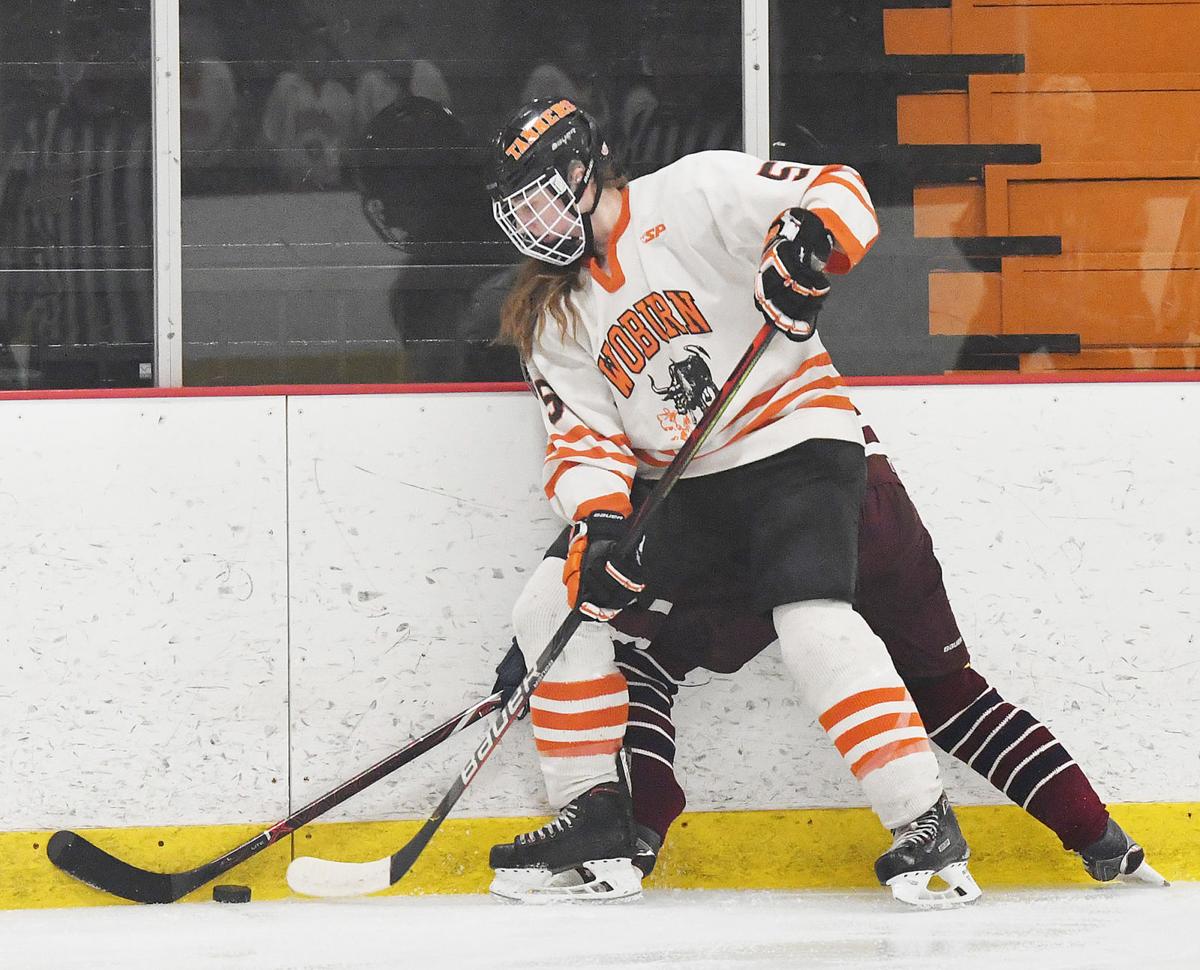 Woburn's Kelsey Ficociello had a goal and two assists in her team's 8-3 win over Belmont. Here, she controls the boards, keeping a Belmont player away from the puck.

WOBURN’S ANGELINA DIGIROLAMO puts one past Belmont goalie Bridgette Gray during her team’s onslaught in Saturday’s girls hockey game at O’Brien Rink. The Tanner girls scored four times in the second period and three in the third to skate away from the Lady Marauders, 8-3.

Woburn's Kelsey Ficociello had a goal and two assists in her team's 8-3 win over Belmont. Here, she controls the boards, keeping a Belmont player away from the puck.

WOBURN — The Woburn High girls’ hockey team scored six times in a 12-minute stretch to turn a hotly-contested battle with Belmont into an 8-3 romp, Saturday afternoon, at O’Brien Rink.

The Tanners (9-1-1) remain in a tie for first place in Middlesex League Liberty with Arlington, which edged Reading on Saturday, 1-0. The teams will have a showdown on Wednesday (6 p.m.) at O’Brien Rink. Woburn’s only loss of the season was to Arlington, 5-1, at Ed Burns Arena back on Jan. 4.

The Lady Marauders, who are in a battle for third place with Winchester, have only two losses all year (they have a few ties), both to the Tanners in games that were not close in the end.

The score was tied at 1-1 after one period, and Belmont tied the game at 2-2 at 11:21 of the second. That seemed to spark Woburn as it scored three times in the remainder of the second, and then three more times in the first eight minutes of the third to win going away.

“It starts with our leadership,” said Tanners’ interim coach Steve Kennedy. “The captains do a great job of getting the girls together in the locker room, making sure they are ready to come out and play a better second period, and they certainly did.”

Woburn had seven different goal scorers over the course of the contest, including every player on the first two lines and defenseman Lily Anderson. Angelina DiGirolamo had two goals and two assists.

The Lady Marauders announced their arrival just 21 seconds in when Emma O’Donovan got the puck in the slot from Maggie O’Connor and flicked a beautiful wrist shot over the shoulder of goalie Amanda Essigmann.

O’Donovan then had a breakaway a couple minutes later, and this time Essigmann was ready for the attempt to go high and she knocked the shot away with her blocker.

The Tanners had a penalty shot at 5:25 after ML Pineros was tripped on a breakaway. She took the penalty shot but it hit off the left post.

Woburn tied the game at 9:28 when DiGirolamo collected a pass from Erin McComiskey, split the Belmont defense and fired the puck past freshman goalie Bridgette Gray.

The Tanners were shorthanded when DiGirolamo willed her way through the Lady Marauder defense, but this time she shot it just wide, and the score remained tied after one, 1-1.

The second did not start out too well as Woburn took back-to-back minor penalties in the first six minutes, but the Tanners got through that stretch with the help of two great saves by Essigmann, one on an open shot by Lily Duffy, and the second on a nice tip of a slap shot by O’Donovan.

Mackenzie Russo gave Woburn its first lead when she tapped in a rebound of a shot by Lucia DiGirolamo, after the puck was put in front of the net from the right side by Angelina DiGirolamo.

O’Connor tied the game at 2-2 when the puck fell behind Essigmann in the crease after making a save on Kara Rowan. O’Connor shoveled it in to give the Lady Marauders a spark.

That did not last long as the Tanners were back in front just 34 seconds later. Kelsey Ficociello tapped in the rebound after Gray made the save on an Anderson shot from the right point.

Pineros did the same thing while Woburn was on the power play two minutes later, putting away the rebound of a shot from Jackie Lees. Angelina DiGirolamo put the finishing touch on the four-goal second with a spectacular rush straight up the ice, ending with her faking the goalie left and tucking the puck along the ice inside the right post for a 5-2 lead.

It was Lucia DiGirolamo who got the Tanners going in the third, deflecting a shot from the point by Lees underneath Gray for a 6-2 lead. Bella Shaw and Anderson completed the scoring.

“Belmont is really tough,” said Kennedy, reflecting on this quality win. “Through the first half of the season we were the only team to beat them and they have played everybody tough, and with good reason. They fight hard and they are well-coached.”