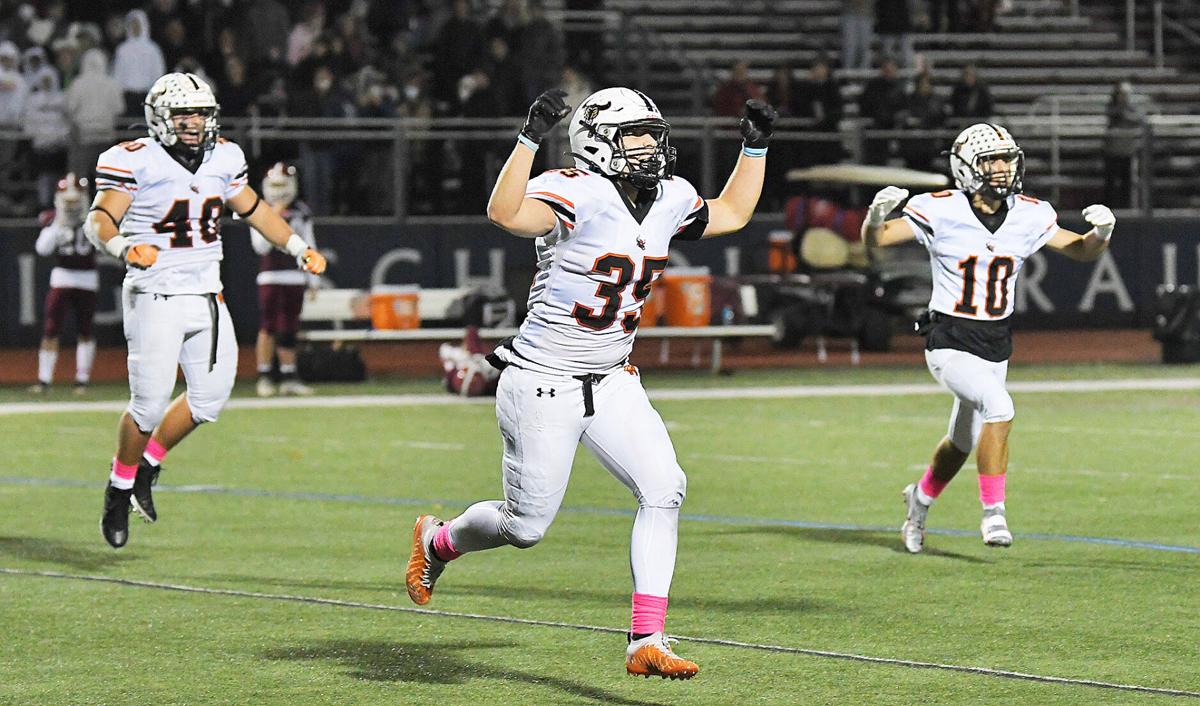 WOBURN FOOTBALL PLAYERS (l-r) Derek Baccari, Jake Daniell and Marc Cutone celebrate their team’s 21-20 win over Belmont after a Marauders’ field goal attempt was missed on the final play of the game. The win allowed the Tanners (6-1) to secure a spot in this week’s Division 2 state playoffs where they will face No. 1 seed Catholic Memorial. 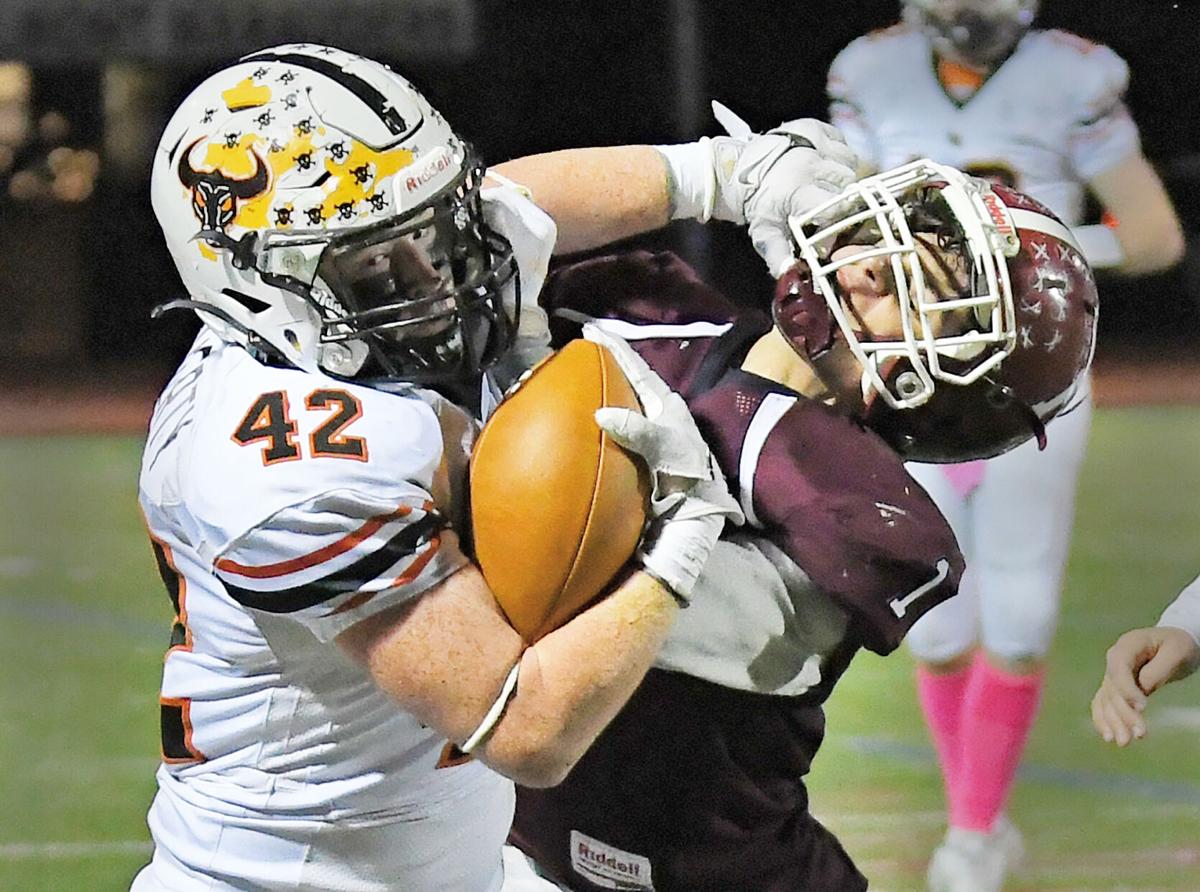 WOBURN’S MICHAEL DOHERTY (42) gained 11 yards on a this pass reception while giving Belmont’s Chris Cogliano a stiff arm as he tried to make the tackle late in the first half of Friday’s game at Belmont. 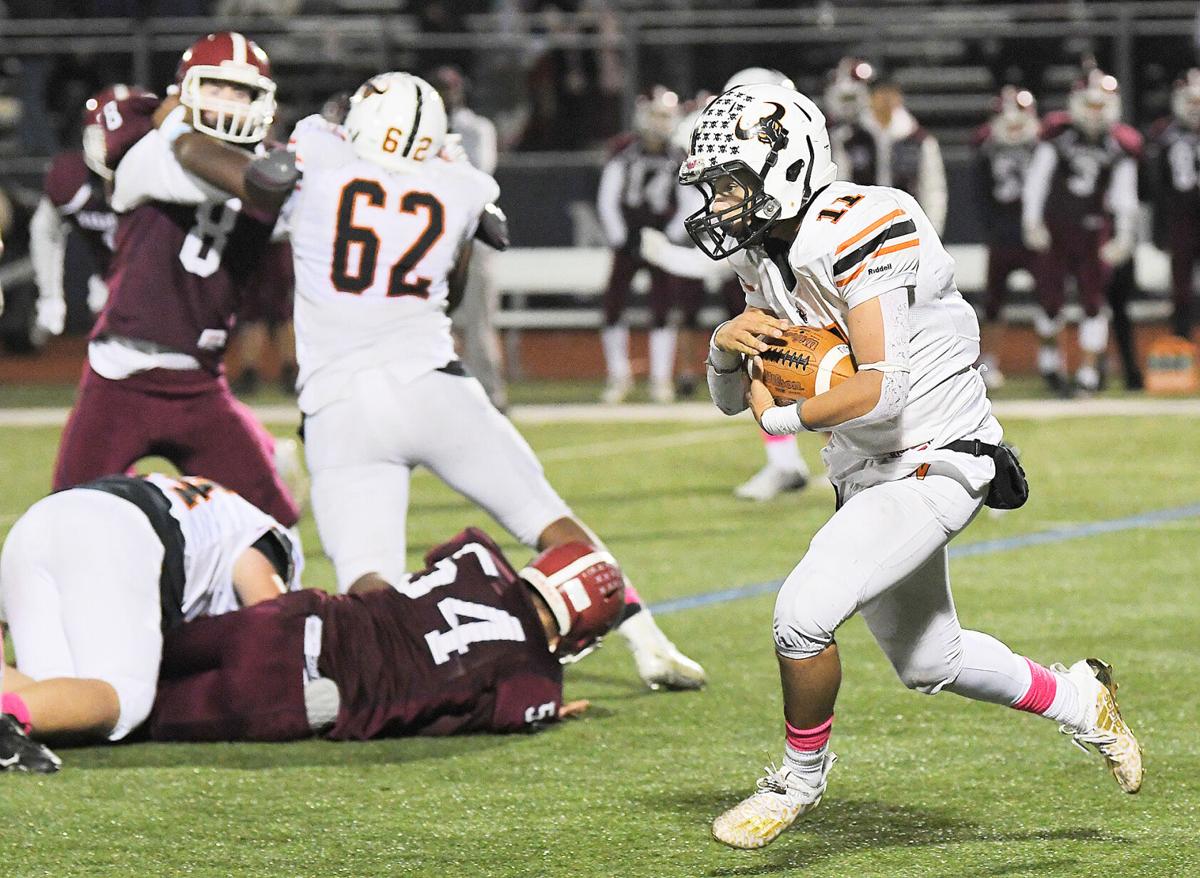 Woburn's Anthony Travers gets some yardage on this carry out of the backfield against Belmont. Travers rushed for 95 yards and two touchdowns in the win.

WOBURN FOOTBALL PLAYERS (l-r) Derek Baccari, Jake Daniell and Marc Cutone celebrate their team’s 21-20 win over Belmont after a Marauders’ field goal attempt was missed on the final play of the game. The win allowed the Tanners (6-1) to secure a spot in this week’s Division 2 state playoffs where they will face No. 1 seed Catholic Memorial.

WOBURN’S MICHAEL DOHERTY (42) gained 11 yards on a this pass reception while giving Belmont’s Chris Cogliano a stiff arm as he tried to make the tackle late in the first half of Friday’s game at Belmont.

Woburn's Anthony Travers gets some yardage on this carry out of the backfield against Belmont. Travers rushed for 95 yards and two touchdowns in the win.

BELMONT — The Woburn High football team was somewhat lucky to bring back the win, but no one from Tanner Town is asking to give the “W” back by any means.

After going up 21-14 with 10:39 to go, the Woburn offense never got the ball back as Belmont was threatening to steal this game late. However, fortunately for Woburn, two missed kicks — an extra point, then a long field goal — allowed the Tanners to escape with a 21-20 victory.

The win pushed Woburn’s record to 6-1 and just allowed the Tanners to garner the 16th and final spot in the Division 2 state-wide playoffs. Woburn will face No. 1 seed Catholic Memorial (7-0) this Friday at 6 p.m. in West Roxbury.

No one was quite sure if a loss last Friday would have dropped the Tanners out of the playoffs due to its complicated ratings formula, but the result held up. Belmont (4-4) certainly threw a scare into the Tanners.

“They play well at home,” said Woburn coach Jack Belcher about Belmont. “I saw them last week in Arlington and they looked like a different team.

“Obviously we’ll take it,” Belcher went on. “Two games in a row they take the opening drive and go right it down our throat. Penalties, stuff that shouldn’t happen in almost November, but we survived. We are in survival time anyway, like they say in ‘March Madness,’ survive and advance.”

Much like Lexington did a week earlier, the Woburn defense allowed an opponent to drive down the field to score on its opening possession.

The Marauders may have found their quarterback of the future as sophomore Jayden Arno had a very good game. He completed 16 of 20 for 142 yards and two touchdowns. He also showed some running/scrambling ability and led his team in rushing with 77 yards on 17 carries.

Six-foot-3 senior Ryan Broderick was the starter earlier in the season at QB but was injured and not dressed for this game.

Arno tossed a three-yard scoring pass to his brother Tyler, a senior, on Belmont’s opening possession to go up 7-0.

Woburn was shut out in the opening half after turning it over on downs on all three of its possessions pretty deep in Belmont territory. Woburn relinquished the ball on the Belmont 27, 12 and was intercepted in the end zone.

The second half proved to be different, however, as the running attack got going behind junior Anthony Travers (14-95, 2 TDs) as the Tanners scored on all three of their second-half possessions. Also, a few well-placed completions by junior QB Brett Tuzzolo helped spark the offense.

“We spread them out to just get a little more space inside,” said Belcher. “Anthony’s playing well; Anthony’s running hard so we give him the ball.”

The Tanners drove 80 yards on 10 plays capped by an eight-yard run by Travers for their first score and a 7-7 tie.

Linebacker Michael Doherty’s interception on Belmont’s ensuing possession set up the Tanners in Belmont territory for their next series.

On their fourth play, Travers took advantage of sloppy Belmont tackling to go 28 yards untouched for the touchdown. Marc Cutone added the second of his three PATs to give Woburn a 14-7 lead.

Just when it appeared Woburn was taking control, Belmont’s Charles Verdet took back the kickoff 80 yards for a touchdown and a 14-14 tie with 1:45 left in the third quarter.

A short Belmont kickoff again had the Tanners starting in good field position at the Woburn 41. Derek Baccari joined Travers in moving the chains on the ground.

Later, on first-and-15, after a false start penalty on Woburn, Tuzzolo found wide receiver Derek Dabrieo wide open behind the secondary and they connected for a 37-yard touchdown pass. Cutone’s kick added to the total making it 21-14, Woburn, with 10:39 still to play.

Jayden Arno engineered an excellent scoring drive that Belmont had to have, but it did take considerable time off the clock.

Helped out by a pass interference call on Woburn, inside the Tanner 10, two plays later Arno found Kevin Logan on the 14th play of the drive on a fade pattern in the corner of the end for the touchdown with 3:02 left.

Belmont elected to go for the tie with the kick instead of the two-point conversion, if, successful would have given it the lead.

On the first attempt at the try, the Marauders were flagged for a substitution foul, backing the kick up another five yards. The kick was then pushed to the right and no good, allowing Woburn to cling to a 21-20 lead.

The onside kick was coming and Belmont recovered after it could not be corraled by the Tanners.

“We didn’t put our hands team out there because our return team kind of practiced for their regular kickoff, which is almost an onside kick anyway,” said Belcher. “So we had some different guys on our regular kickoff.”

With only one timeout left, Belmont did get it to the Woburn 18 with :05 to go when it used that timeout. Placekicker John Miletich’s attempt at a game-winning 35-yard field goal was short and to the left, allowing Woburn to survive.