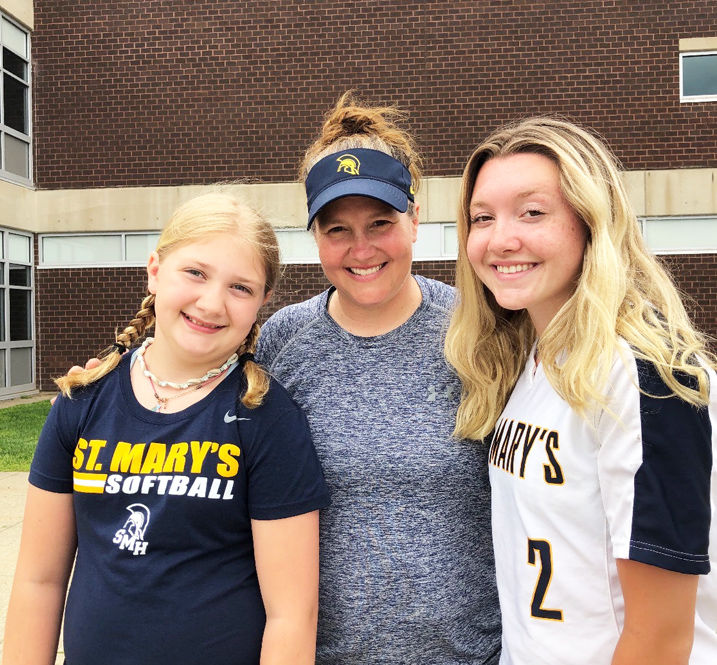 READING NATIVE LYSA (STORTZ) NEWHALL (middle), a former RMHS three-sport athlete and a Middlesex League softball All-Star, is seeing her daughters follow a similar path in the sport. Adyson (left), a fourth-grader, and more currently Lily (right), a sophomore, is a rising star pitcher at St. Mary’s of Lynn.(Courtesy photo) 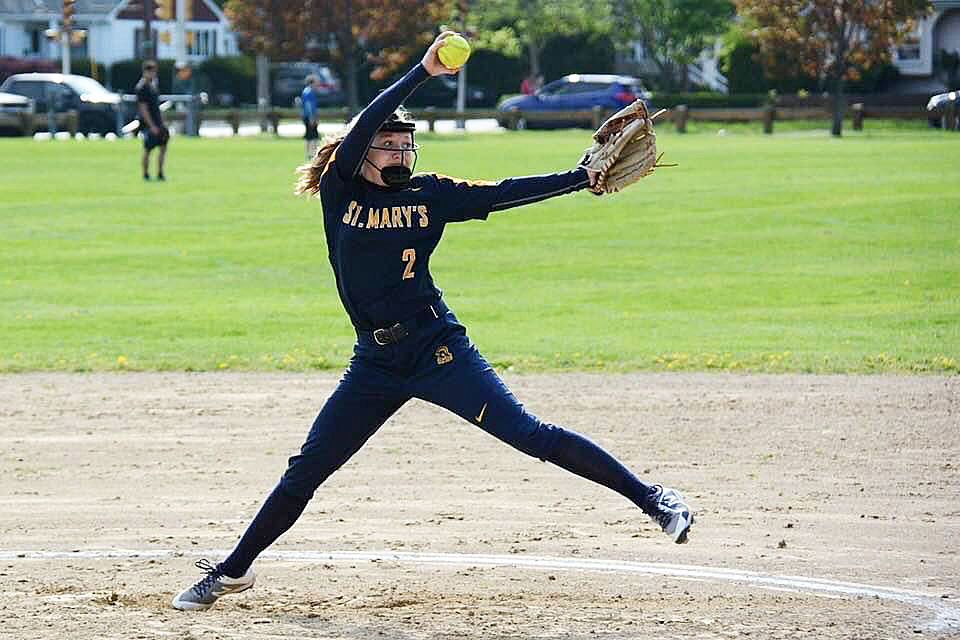 Lily Newhall is a rising star pitcher for St. Mary's of Lynn. Her mom Lysa was a standout three-sport athlete at Reading High during her days. 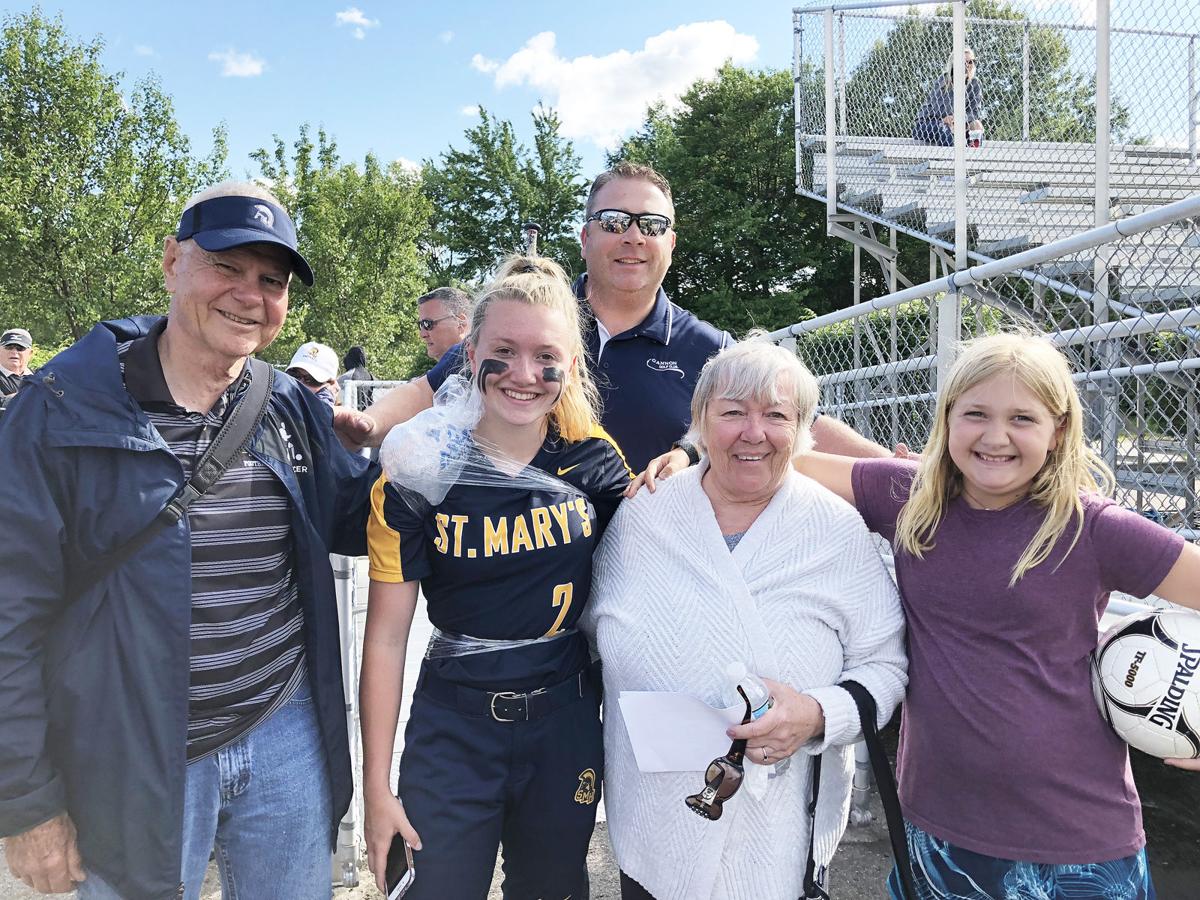 READING NATIVE LYSA (STORTZ) NEWHALL (middle), a former RMHS three-sport athlete and a Middlesex League softball All-Star, is seeing her daughters follow a similar path in the sport. Adyson (left), a fourth-grader, and more currently Lily (right), a sophomore, is a rising star pitcher at St. Mary’s of Lynn.(Courtesy photo)

Lily Newhall is a rising star pitcher for St. Mary's of Lynn. Her mom Lysa was a standout three-sport athlete at Reading High during her days.

There is really no surprise when a talented high school and college athlete goes on to coach and then see their children follow in their footsteps.

For Reading native Lysa (Stortz) Newhall she is seeing that come true.

After a fine three-sport (soccer, basketball, softball) high school career at Reading High, then a college softball career at Bridgewater State, Newhall has dabbled in the softball coaching ranks as an assistant at two Lynn high schools.

A year ago as a freshman, Lily Newhall pitched St. Mary’s (19-5) into the Division 3 North title game before falling to Austin Prep, 2-1, in eight innings. The then 14-year-old pitcher put up quite a fight for the Spartans as she struck out seven and scattered six hits.

Lily Newhall had been a varsity starting pitcher since eighth grade. This year was going to be a big season for Newhall and St. Mary’s with the loss of just three seniors from the 2019 team. But, the coronavirus pandemic ended its season as well as everyone else’s.

Mom Lysa will just have to wait and hope that by the summer the virus will be a bit better and some AAU showcases can be held for Lily to hone her pitching skills.

Lysa makes sure she is no “stage door mom,” so to speak, as an assistant coach on the St. Mary’s staff.

“I may be the pitcher’s mom, but I don’t say anything to her and let her alone,” said Lysa Newhall. “I just stand in the corner when she is pitching.”

Lily Newhall may have inherited Lysa and her father Jason’s athletic genes, but Lily plays a much different position than her mom did during her four years on the Reading High varsity softball team before she gradated in 1991.

Lysa Stortz was a three-year starter at second base and a Middlesex League All-Star her senior year. The teams she played on went 75-13 and won three ML titles. The 1990 season was her best batting .353.

That was the Steve Rhodes-coached era at RMHS and Reading softball was a real dynasty even back then. Lysa had a real love, passion and spirit for the game and she says her daughter has even taken that up a notch.

“She’s got that fire and good drive and has a real presence about her,” said Lysa Newhall. “She’s like ice; not much rattles her.”

After meeting her husband Jason, a Lynn native, at Bridgewater State the couple married in 2002 and settled in Jason’s hometown of Lynn. Lysa stayed involved in sports and was in her second year as part of the Lynn Classical coaching staff in 2003 and helped engineer one of the bigger, more crushing upsets against her alma mater in softball.

The Reading softball team in 2003 went 20-0 during the regular season and won its first tournament game against Acton-Boxborough, a game that Newhall scouted. Newhall was only recently removed from her Reading roots and had known a couple of players on the Reading team having coached a few a couple of years back on the old Reading Rage that Frank Driscoll headed.

Still, when the Lady Rockets were to host No. 9 seed Lynn Classical in the Division 1 North quarterfinals at Reading High not a lot of people were really anticipating the result that happened.

Reading was just two years removed from a Division 1 state championship in 2001 and there were still a fine collection of holdovers from that team like Reading High Hall of Famers Courtney Campbell and Stephanie Brooks looking to make it two titles in three years.

Lynn Classical capitalized on a hit batter, a sacrifice and an error to take a 1-0 lead. Reading had its share of base runners but Lynn Classical pitcher Christina Mihos made all the right pitches at the time and the defense made all the plays.

Years later, Mihos would bring that game ball to her induction into the Lynn Classical Hall of Fame in 2019.

After “about six or seven years” at Lynn Classical as a coach, the birth of her third child Adyson made things harder on Lysa to fit in coaching. She remained out of it until 2019 when during Greek Easter, St. Mary’s needed a first base coach for a game and Lysa was asked to help. That got her softball juices going again and they kept her on.

This would have been her second season back on the staff but the pandemic made for a large loss in the Newhall household with no softball.

Her parents Ron and Nancy Stortz still live in Reading and they never miss one of Lysa and Jason’s kids’ games. Ron and Nancy Stortz even serve as a host family for the North Shore Navigators, a college baseball summer league team that plays in the Futures League out of Fraser Field in Lynn during the summer.