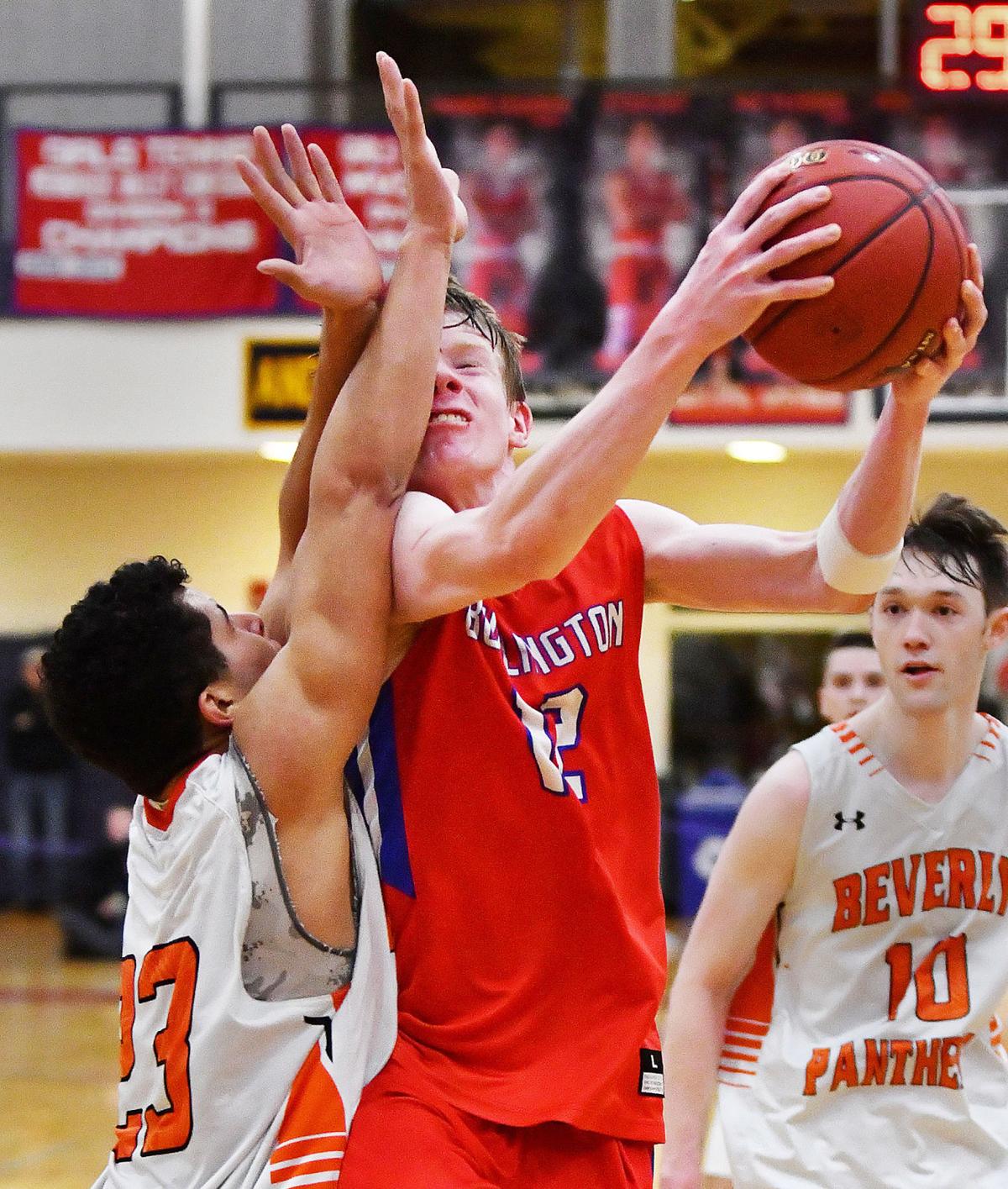 Burlington's Kyle Inglis gets fouled by Beverly's Gabe Copeland late in the recent MIAA Division 2 North boys basketball semifinal game. A bench player a season ago, Inglis dedicated himself to improving his game and went on to have an excellent season averaging 15.8 points per game to be named a Middlesex League Freedom Division All-Star. Inglis has also been chosen as the Daily Times Chronicle’s boys basketball “Player of the Year.” 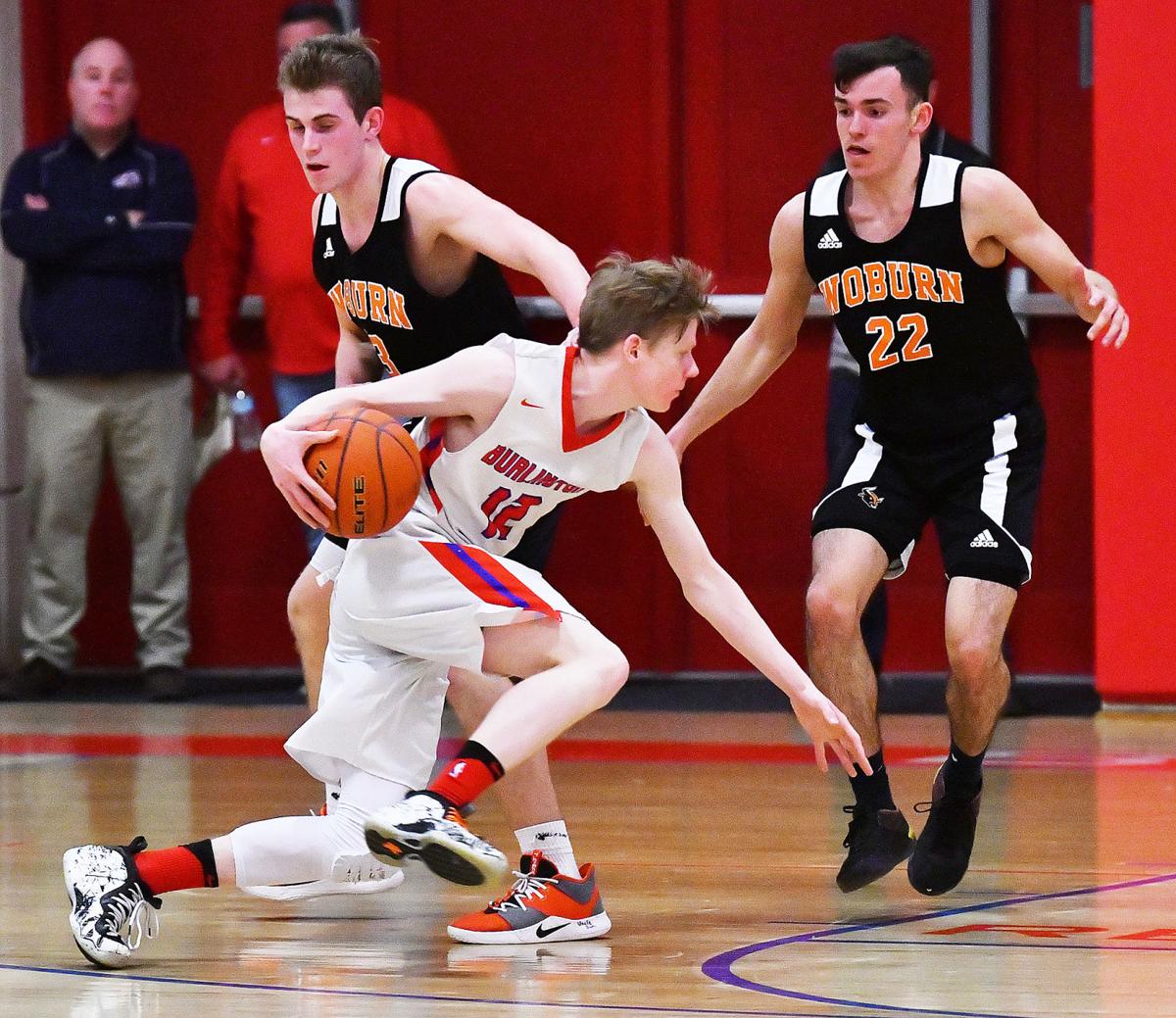 BURLINGTON’S KYLE INGLIS drives into the lane during the tournament game against Woburn.

Burlington's Kyle Inglis gets fouled by Beverly's Gabe Copeland late in the recent MIAA Division 2 North boys basketball semifinal game. A bench player a season ago, Inglis dedicated himself to improving his game and went on to have an excellent season averaging 15.8 points per game to be named a Middlesex League Freedom Division All-Star. Inglis has also been chosen as the Daily Times Chronicle’s boys basketball “Player of the Year.”

BURLINGTON’S KYLE INGLIS drives into the lane during the tournament game against Woburn.

BURLINGTON — Kyle Inglis wasn’t obsessed with basketball as a youngster like a lot of hoop players who become great players at the high school level.

In fact, according to his high school head coach, Inglis didn’t even pick up the game until late and was just a reserve player on the Burlington High boys basketball “freshman” team.

But through hard work and dedication, Inglis flourished this past year and has been selected as the Daily Times Chronicle’s boys basketball “Player of the Year.”

“The funny thing about Kyle is that he didn’t even play basketball until about eighth or ninth grade,” said Burlington boys basketball head coach Phil Conners of Inglis. “For him to pick up the game at that time, and become as good as he got by his senior year is very rare. He didn’t even start on the freshman team, but was the third kid in off the bench. This just shows how much work he put into improving himself, and how far he’s come as a player, from his freshman to his senior year.”

He gradually progressed to the JV team in his sophomore year, and moved up to the varsity squad in his junior year last season. Coming off the bench at guard he averaged a modest 5.1 points per game.

But after Burlington’s disappointing loss in the first round of the Div. 2 North tournament to North Andover, Inglis (6-0) dedicated his efforts over the entire nine-month off-season to improving his game.

After being named one of the captains, along with fellow senior Mike Melanson for this past season, Inglis led frequent captain’s practices with the returning players over the off-season. The hard work Inglis and his teammates put in gradually became apparent in their play as this past season unfolded. The Red Devils exceeded all expectations by winning 13 of their first 14 games, including its first 10 league games.

“His improvement from last year to this year was immense,” said Conners. “After last year’s season ended he was a big leader for our team during the off-season, taking it upon himself along with Mike Melanson to lead off-season workouts with the other returning players. These workouts helped make him so much of a better all-around player this past season.”

And what an improvement as Inglis went from averaging 5.1 off the bench in 2018-19 to 15.8 ppg this past season and was named a Middlesex League Freedom Division All-Star.

Inglis overcame a slow start as he only scored in double digits in two of the first five games.

He found his rhythm quickly, however, and tallied 10 or more points in all but two of the remaining games.

And on a team that relied on the 3-point shot as a main offensive weapon, Inglis more then held his own with 28 from deep.

Yet offense wasn’t the only part of his game that Inglis showed dramatic improvement from last year. He also pulled down 112 rebounds, dished out 54 assists, and defensively came up with 43 steals and took 10 charges. His immense all-around play peaked in Burlington’s final regular season game, when he scored 26 points in the second half and overtime, to lead the Red Devils to a Freedom Division title-clinching win over Wakefield.

Inglis continued his stellar play in the tournament, scoring 18 and 21 points respectively in wins over Woburn and Winchester in the first two games, before he capped his high school basketball career by scoring 23 points in a semifinal overtime loss to eventual Division 2 North champion Beverly.

The key to his amazing success for the Red Devils this past season wasn’t just his improved accuracy to shoot from the outside. He also displayed the ability, especially against opposing defenses closely guarding him at the 3-point line, to drive inside right to the basket and score.

But even his all-around talent he showed on the court this past season wasn’t the only aspect of his game that made him something special this past season. Inglis also fully utilized his role as one of the team’s co-captains to provide leadership and vocal support not only to his teammates, but also for the Burlington boys’ JV and freshmen teams. He even supported the girls’ varsity squad whenever the opportunity presented itself.

“In 18 years of coaching he was one of the best leaders I have ever coached,” said Conners. “He brought kids together, he had a very positive attitude, and he provided vocal support cheering on the (other) teams. I feel his leadership ability is second to none, and he’s really a special kid.”

While Inglis will be missed by next year’s Burlington boys’ basketball team, his fine all-around play and leadership skills this past season helped him secure a spot with the New England College men’s basketball team, where he committed to play next year at the D-3 college level.