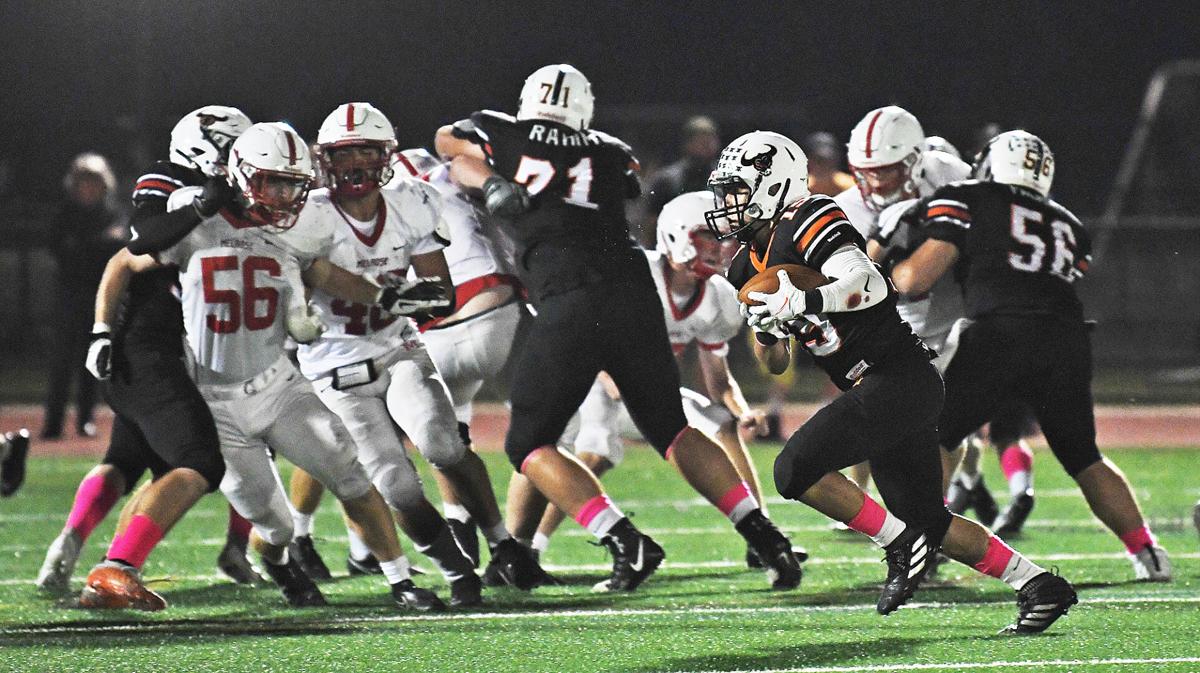 WOBURN’S BRIAN FERREIRA looks to pick up some of his 185 yards rushing behind the blocking of Amin Rahim (71) and Anthony Palmieri (56). The Tanners held off Melrose, 21-14, on Friday night for their first win over the Raiders since 2010. 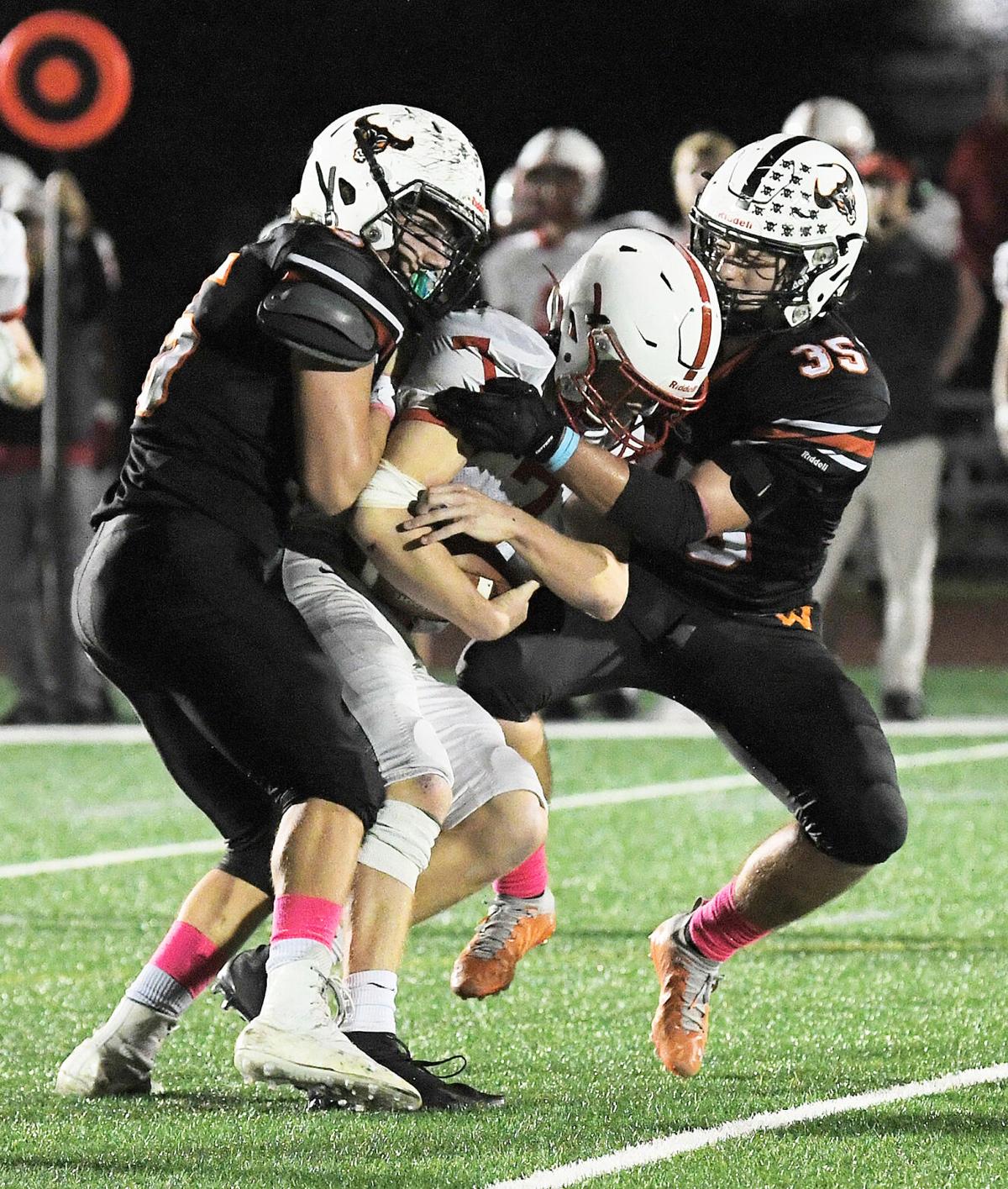 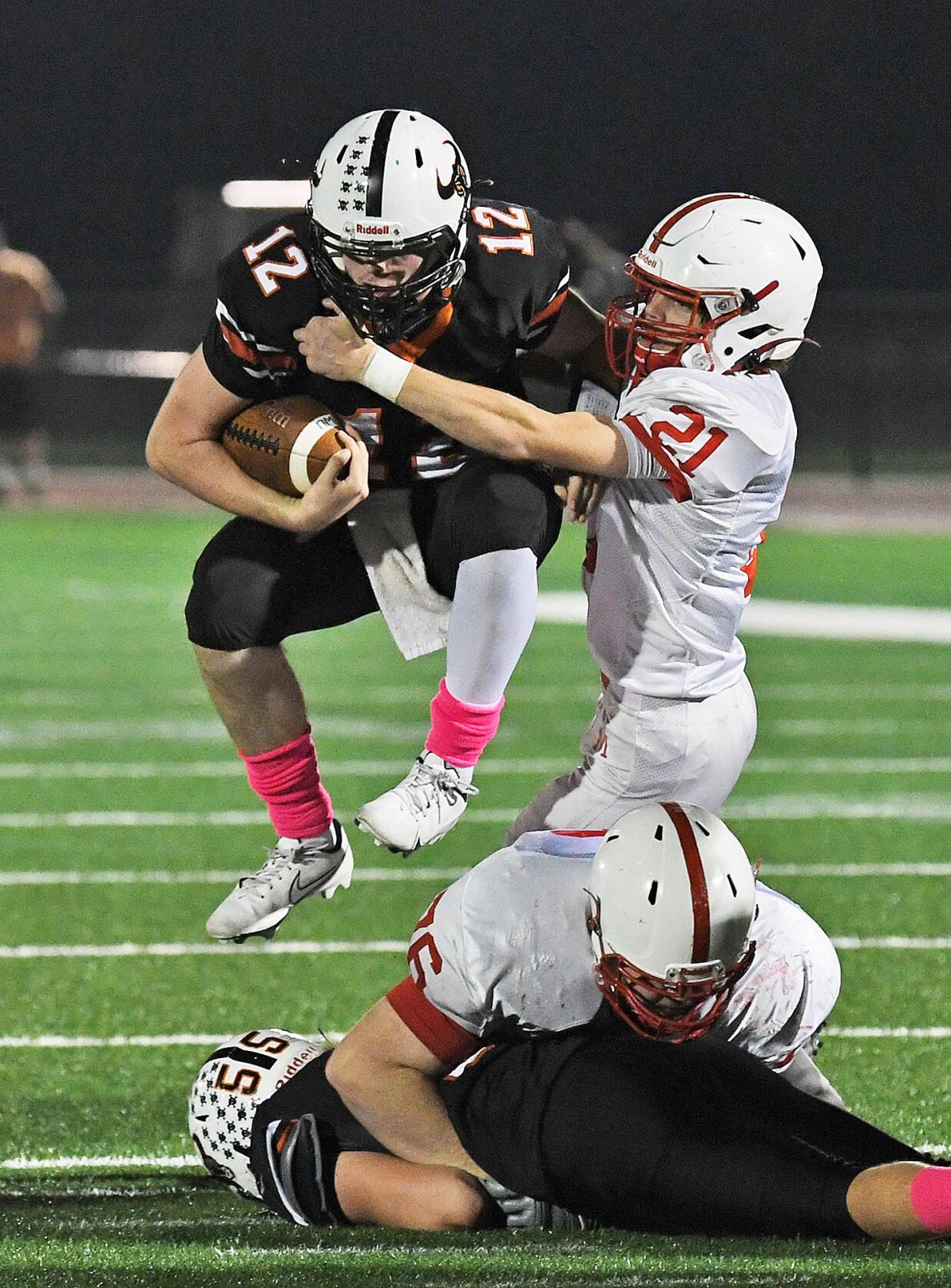 Woburn uarterback Brett Tuzzolo is grabbed by Melrose Stephen Fogarty as he leaps over the line of Woburn's Killian Hayes and Melrose's Jason LaBarbera during last Friday's game at Woburn High.

WOBURN’S BRIAN FERREIRA looks to pick up some of his 185 yards rushing behind the blocking of Amin Rahim (71) and Anthony Palmieri (56). The Tanners held off Melrose, 21-14, on Friday night for their first win over the Raiders since 2010.

Woburn uarterback Brett Tuzzolo is grabbed by Melrose Stephen Fogarty as he leaps over the line of Woburn's Killian Hayes and Melrose's Jason LaBarbera during last Friday's game at Woburn High.

WOBURN — If nothing else, beating Melrose after losing the last eight straight meetings is very satisfying for the Woburn High football program.

The Tanners beat the Raiders, 21-14, last Friday for their first win over this strong Middlesex League Freedom Division program since 2010. Woburn held a seemingly comfortable 21-0 lead, but then had to hold off a late Melrose comeback to raise its record to 4-1 on the season.

The game did not count in the Middlesex League Liberty Division standings, but still did in the MIAA power ratings. Woburn inched up to 12th place in the state in Division 2. The top 16 teams will make the new state-wide playoffs beginning the weekend of Nov. 5-6.

The Woburn rushing attack appeared to be in control right from the start but it was just an 8-0 lead at the half. The Tanners shifted away from their “old school” Double-Wing offense for a more traditional power I. After taking control in the third quarter and early in the fourth, the Tanners had to hold on as Melrose quarterback Trevor Botto threw two fourth-quarter touchdown passes to make things interesting.

It wasn’t quite the way Woburn coach Jack Belcher would like to see his team close out a game with a 21-0 lead, but he is more than happy to take the win.

“Very ugly, too many miscommunications, but Melrose is still Melrose, they play everybody pretty tough,” said Belcher. “The quarterback’s good, (Trevor Botto) is very good; we’ll take it.”

Sophomore running back Brian Ferreira led the way with his fourth 100-yard rushing game of the season with 185 on 26 carries and two touchdowns. Ferreira now has 863 yards rushing on the season. Junior quarterback Brett Tuzzolo had the other touchdown on a one-yard dive.

A week ago in Reading, the Rockets muzzled the double-wing attack a bit so it was time to change things up a little with the Woburn offense going with a more power set.

“As the season goes along, you can’t just go with what worked against Wilmington and Burlington, they’ve seen that,” said Belcher of Woburn’s opponents. “(Teams) scout just as hard as we scout. That’s a part of high school football, you’ve got to mix it up as you go along. And we’ll continue to try and do that.”

Despite its 1-4 mark coming into the game, Melrose had begun to figure some things out. A week ago it was a two-point conversion away from pinning a loss on unbeaten Stoneham.

But, Woburn got the jump on it early. A 12-play, all on the ground, 71-yard opening drive resulted in a 14-yard touchdown run by Ferreira who took it in untouched over the left side. Ferreira also ran in the two-point conversion to make 8-0 Woburn.

After a Melrose punt on its opening possession, Woburn appeared poised to go in again. But a sack and then an interception turned the ball over to Melrose inside Raider territory.

On its third and final drive of the half, Woburn was again driving deep into Melrose territory but couldn’t finish off the drive. A fourth-down pass from the Melrose 14 was incomplete and that ended the half with Woburn still only up 8-0.

Midway through the third quarter, senior Derek Dabrieo played a key role in setting up Woburn’s ensuing touchdown. He returned a Melrose punt from midfield to the Raider 38. On the first play from scrimmage he caught a play-action first-down pass from Tuzzolo and took it 30 yards to the Melrose eight. Three plays later, Tuzzolo went in from the one.

Sophomore Marc Cutone kicked the extra point to make it 15-0 with 4:38 left in the third quarter.

The Tanner defense knew it had to watch Botto at the controls of the Melrose offense and for the most part limited his running and passing. A fierce pass rush on fourth down on the next Melrose possession force Botto to be called for intentional grounding. This gave Woburn fine field position at midfield at the end of the third quarter.

On the fourth play of the Woburn drive, Ferreira broke one up the middle for 32 yards and was just tackled at the one. He caught the next handoff and scored his 10th touchdown of the year. The two-point conversion pass failed but Woburn was now in control (or so it seemed) at 21-0 with 10:25 to play.

The Melrose offense now opened up with Botto going to the air. The senior QB, and first-year starter, was 11 for 19 for 139 yards and two touchdowns when the game ended. He first found Rob Colozzo for 41 yards and a score on a perfectly thrown pass while on the run. Zach Federico added the extra point to trim the lead to 21-7 with 7:18 to play.

Woburn earned one first down on its next possession and did run the clock down to just under four minutes when it turned the ball over on downs at the Melrose 31.

Melrose took 11 plays to cover 69 yards and it was capped off by a 15-yard pass from Botto to Shea Fogarty with 1:31 to play. Federico kicked the extra point to make it 21-14 with an onside kick coming up.

But, Federico’s onside kick went out of the bounds along the Melrose sideline and Woburn had the ball at midfield. A first-down pickup by Derek Baccari on a third-and-one brought up “Victory Formation” for Woburn to end the game.

This week’s Woburn home game against Lexington will be played on Thursday at 7 p.m. Reportedly there is a shortage of officials this Friday night so a shift in the game helped out the situation.