Reading players celebrate one of the team’s four goals in their 4-1 victory over Austin Prep in a quarterfinal round game of the Division 1 North boys hockey tournament at O’Brien Rink on Saturday afternoon. The Rockets will meet Belmont in the semifinals on Thursday at Tsongas Arena at 7:30 p.m. 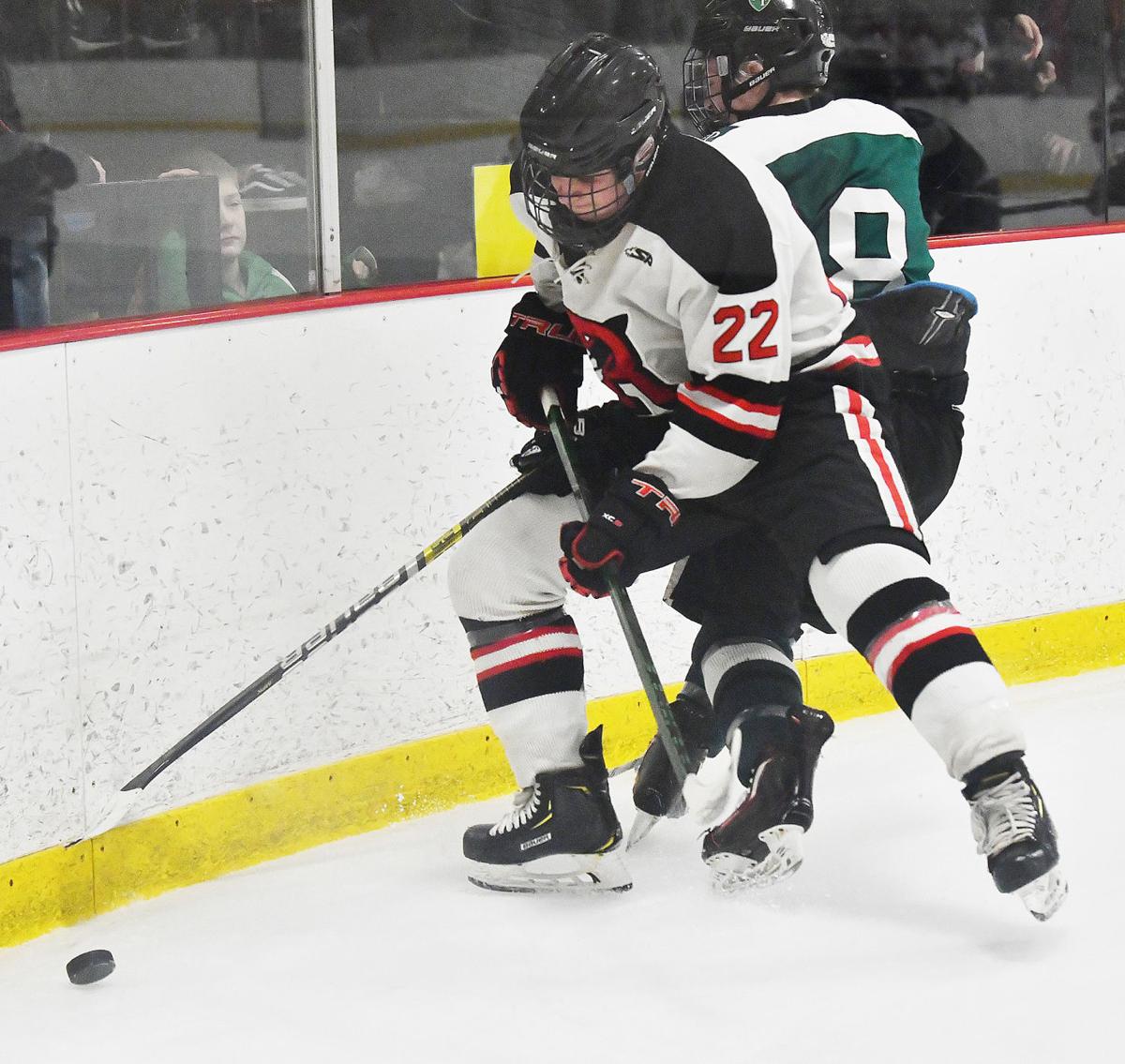 Reading's Charles Miele (22) and Austin Prep's Nolan Ricci battle for the puck along the boards during Saturday's Division 1 North boys hockey tournament game at O’Brien Rink. The Rockets skated past their Reading Catholic school rival, 4-1. Reading will meet Belmont in the semifinals on Thursday at Tsongas Arena.

Reading players celebrate one of the team’s four goals in their 4-1 victory over Austin Prep in a quarterfinal round game of the Division 1 North boys hockey tournament at O’Brien Rink on Saturday afternoon. The Rockets will meet Belmont in the semifinals on Thursday at Tsongas Arena at 7:30 p.m.

Reading's Charles Miele (22) and Austin Prep's Nolan Ricci battle for the puck along the boards during Saturday's Division 1 North boys hockey tournament game at O’Brien Rink. The Rockets skated past their Reading Catholic school rival, 4-1. Reading will meet Belmont in the semifinals on Thursday at Tsongas Arena.

WOBURN — It was the underclassmen that led the way for the Reading High boys hockey team in its big win over Austin Prep.

Reading, the No. 1 seed, defeated the eighth-seeded Cougars, 4-1 Saturday afternoon at O’Brien Rink in the quarterfinals of the MIAA Division 1 North tournament behind second-period goals by sophomores Michael Dufton and Ryan Goodwin that got the scoring starting for the Rockets.

After Austin Prep cut Reading’s 2-0 lead in half late in the second period, the Rockets came right back with a goal early in the third from junior Treavor Owens and then later added an empty-netter from Landyn Greatorex to seal the win.

“We have felt for the last month the young kids have been really coming quickly,” said Reading coach Mark Doherty. “We saw it coming and have felt it coming. I am so happy for them. They are getting rewarded. We have had faith in them and we have used them all year because we know they have the ability. It is working out pretty well right now.”

Reading (11-6-6) will now move on the semifinals where it will face fellow Middlesex Liberty foe Belmont (12-5-5), Thursday night, at the Tsongas Arena at 7:30 p.m. These two teams have already faced each other twice this season with Reading having the advantage winning both by scores of 4-3 and 2-1. The Marauders are coming in playing hot and coach Doherty knows its going to be a fun match-up.

“They have very good goaltending and it is going to be a real good game,” said Doherty. “Both games with them this season were tight. We got both of them, but who knows what could happen this time.”

Both Austin Prep and Reading came out ready to play in this one, with both sides getting quality chances in the first period.

Reading goalie Dylan Emery came up big in the first with some key saves early to keep the Cougars off the board.

The Rockets out-shot the Cougars 12-10 in the first, but it was anybody’s game heading into the second.

Reading continued to keep the pressure on early in the second and had a few good chances that Austin Prep goalie Andrew MacDonald made good saves on.

At 9:55 of the second period, Reading broke through for the game’s first goal in exciting fashion. Senior Cam Lawhorne passed over to Dufton who came around the back of the net and scored on a wrap-around goal to give the Rockets a 1-0 lead.

A few minutes later, Reading came through again and this time it was Goodwin that got the goal. Senior captain Matt Fiorenza made a nice play and sent a nice feed to Lawhorne, who caught it on the fly and passed across to Goodwin, who fired one home to give the Rockets a 2-0 lead.

With nine seconds remaining in the second period, the Cougars cut Reading’s lead in half on goal by Christopher Roy after passed from Ty Wood and Aidan Elkins to make it a tight 2-1 lead.

At 3:47 of the third period, Reading got a huge insurance goal when Dufton made a nice feed to junior Owens who was able to get it just past goalie MacDonald to give Reading the 3-1 advantage with 11 minutes left to play.

“The third goal was huge,” said Doherty. “Just changes whole complexion of the game. They [Austin Prep] are a skilled group that are physical and can skate well. So, getting that third goal never makes it comfortable, but it helped quite a bit.”

Reading held Austin Prep to limited chances in the third and that has a lot to do with the Reading defense of Fiorenza, Lawhorne, Brandon Millerick and Charlie Miele that have been outstanding all season.

“We have had four returning defenseman that have been with us for a while,” said Doherty. “They are big and physical and they understand how to get puck out of the zone. The kids are buying in on what we are trying to accomplish. The attitude is great in the room and that all contributes.”

Austin Prep pulled the goalie with 2:09 left to go in the game and Reading did a great job of getting pucks deep and keeping the Cougars from getting any quality chances.

With 20 seconds left in the game, Reading added to its lead with an empty-net goal scored by Greatorex with assists to Emery and Sean Barbera to seal the 4-1 win for the Rockets.

The victory was Reading’s first “official” win over its in-town neighbor since 1983. The Rockets have actually won twice in overtime in the Buddy Ferreira tournament in Falmouth (including this year) in the past, but those games officially are recorded as ties. The MIAA doesn’t recognize OT in the regular season.