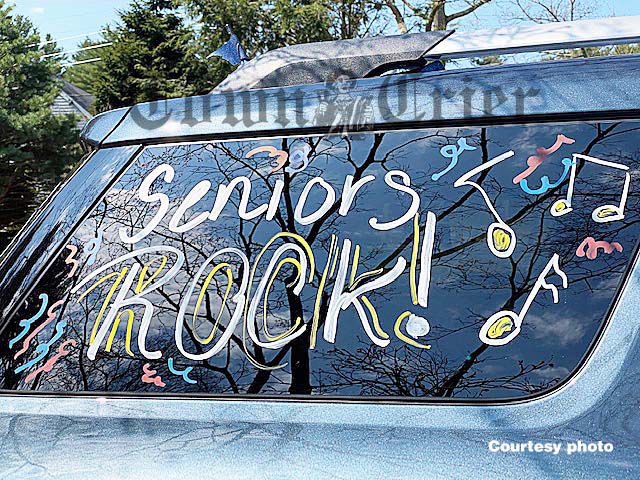 Celebration of TMHS seniors as part of the theater club send off. (Courtesy photo) 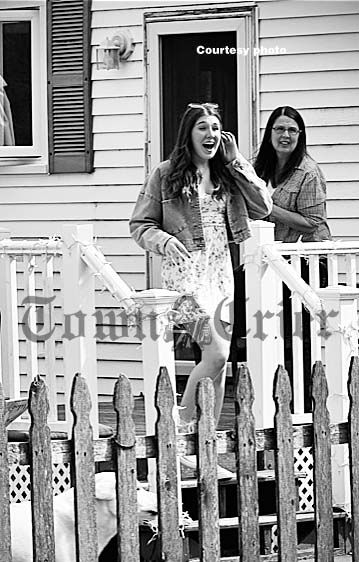 Senior Melanie Crepeau shows her surprise as the TMHS theater club parade went by. The boosters arranged for the seniors to have a send off since they could not have a traditional gathering due to COVID-19. (courtesy photo) 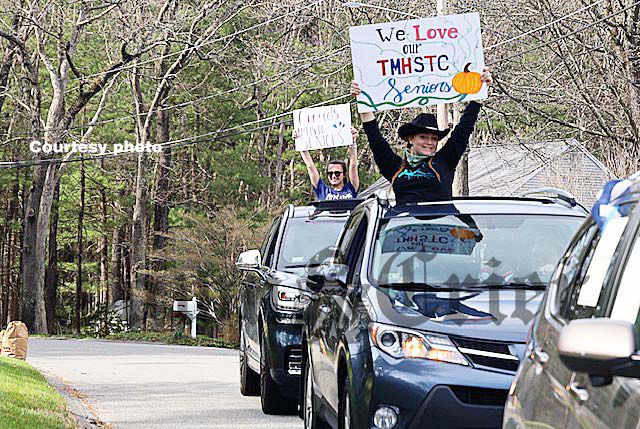 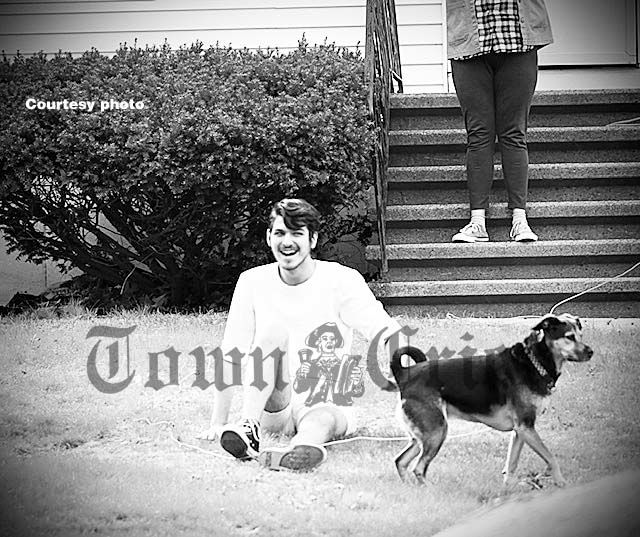 Senior Brian Carta is surprised by the TMHSTC drive-by celebrating graduating seniors. The final musical, Cinderella, was cut short due to the school closure. (Courtesy photo)

Celebration of TMHS seniors as part of the theater club send off. (Courtesy photo)

Senior Melanie Crepeau shows her surprise as the TMHS theater club parade went by. The boosters arranged for the seniors to have a send off since they could not have a traditional gathering due to COVID-19. (courtesy photo)

Senior Brian Carta is surprised by the TMHSTC drive-by celebrating graduating seniors. The final musical, Cinderella, was cut short due to the school closure. (Courtesy photo)

TEWKSBURY — Two months into rehearsals, the Tewksbury Memori­al High School Theater Club (TMHSTC) had to halt production of their spring musical, Cinder­ella, due to COVID-19.

Originally scheduled to open on April 30, the production was going to be the crowning performance for the 14 seniors in the cast and crew. Ad­ditionally, two seniors from the marching band were going to perform alongside the professional ensemble which was going to support the production.

A traditional send off for graduating theater seniors has been the presentation of TMHSTC sweatshirts, something the students take with them into the next chapter of their lives. Since it wasn’t going to be possible with social distancing restrictions, the boos­ters decided to get creative.

“The logistics were a consideration so we de­cided on a small group which would represent everyone,” said parent Johnna Mangan.

The rest of the cast created a video to share with the group.

“We told the kids we had a surprise and to be home at a certain time,” said Mangan. “We were able to visit 13 of the 14 kids. The last one was at work at Market Basket,” but the group was able to deliver all the sweatshirts.

Using appropriate protocols, cars were decorated, signs were made, and a route was plan­ned. Images were captured by parent Robin Whealan.

The students will at­tend a range of colleges and will be pursuing di­verse majors. While some will go on to study theater arts, other will find ways to participate in college theater and mu­sic by attending perfor­mances or joining en­sembles.

Some of the students were able to share sentiments about their time with the group and what participating in the theater club and productions meant to them.

Andrew Bielecki reflec­ted, “I’ve generally ac­cep­ted the loss, and while I wouldn’t say I’ve moved on, I’ve definitely handled it well. Yeah, it’s a shame that there won’t be senior project, or prom, or a regular graduation, and of course, we won’t get to perform Cinderella, but still, I was able to enjoy my most of my time at TMHS before our last day there,” noting that memories are very powerful and that the theater company was front and center in his life.

Colby Brooks said, “This club means so much to me. I've gotten closer to some of my friends because of it and made a ton of new friends. I can be myself around these guys. I'm severely disappointed that we won't be able to finish this year properly but I have a future to look forward to so I'm alright.”

Melanie Crepeau shar­ed, “TMHSTC meant so much to me. I’ve been a part of it since I was a freshman but it’s been in my life for so much longer than just my high school years. Before high school, I would go see every show at TMHS and dream of being on that stage. When I got to the high school and joined the club, I knew I had found my place and my people. I have had the most wonderful experiences with TMHSTC.”

In the words of Zach Graczyck, “continuing to do theater in high school was the best decision I've made, and I am so grateful for all of the opportunities, friendships and support I've been given for the past four years in our club. At my time with the TMHSTC, I discovered my values, my work ethic and my life goals, and I will always be so thankful for that. I really discovered who I am and who I want to be. My heart is so full when I look back at all of the memories and all of the things the Booster Club and underclassmen have done for us seniors. The fun relationships and lasting memories I made here will always be in my heart, and a huge thank you to Jade Scarpa and Heather Ware for making that possible.”

Many students expres­sed that theater club was a way for them to make new friends and push their limits, overcoming shyness and finding “their people.”

Brendan Flynn said, “TMHSTC to me started as a way for me to socialize more and get more in­volved with the type of people I’d want to be around, and it’s grown to be second nature to my high school memories. I do plan on doing theater in college if the opportunity is there,” something that was echoed by most of the seniors.

Jasmine Won said, “The program was my family. It was a place for me to feel unconditionally hap­py, whether it was helping fellow castmates or wat­ching the crew do their job incredibly well. It was amazing to go to because I knew I would have a good time.”

Students around the globe are dealing with “an incomplete year” in so many regards, but the undertones of hope and resilience are present in all of their responses.

As to the abrupt ending to the school year and theater season, director Jade Scarpa had this sentiment for the students: "I've had the humbling opportunity to watch these students grow on and off stage over the past four years, and although I'm sad that our journey together remains unfinished, I know that these young men and wo­men will carry all of the characteristics that made them incredible assets to our company into the world around them as they move forward. Since they stepped onto our stage as freshmen, I've watched them practice kindness, resilience, grace, and unflinching optimism, and I only expect that to continue. Seniors, the stage will always be your home, and so will this company. Each role you've played has allowed you to live an­other life, go on another adventure, and learn new lessons about your character, and yourself. All of that has prepared you to take your own journey beyond the stage and into your future. I can't wait to watch you shine."