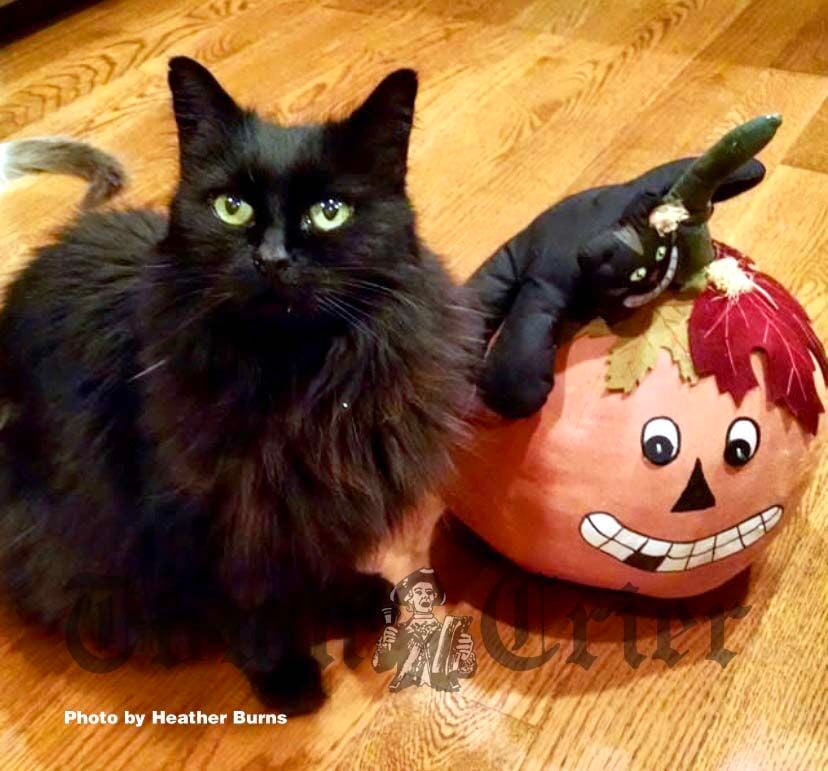 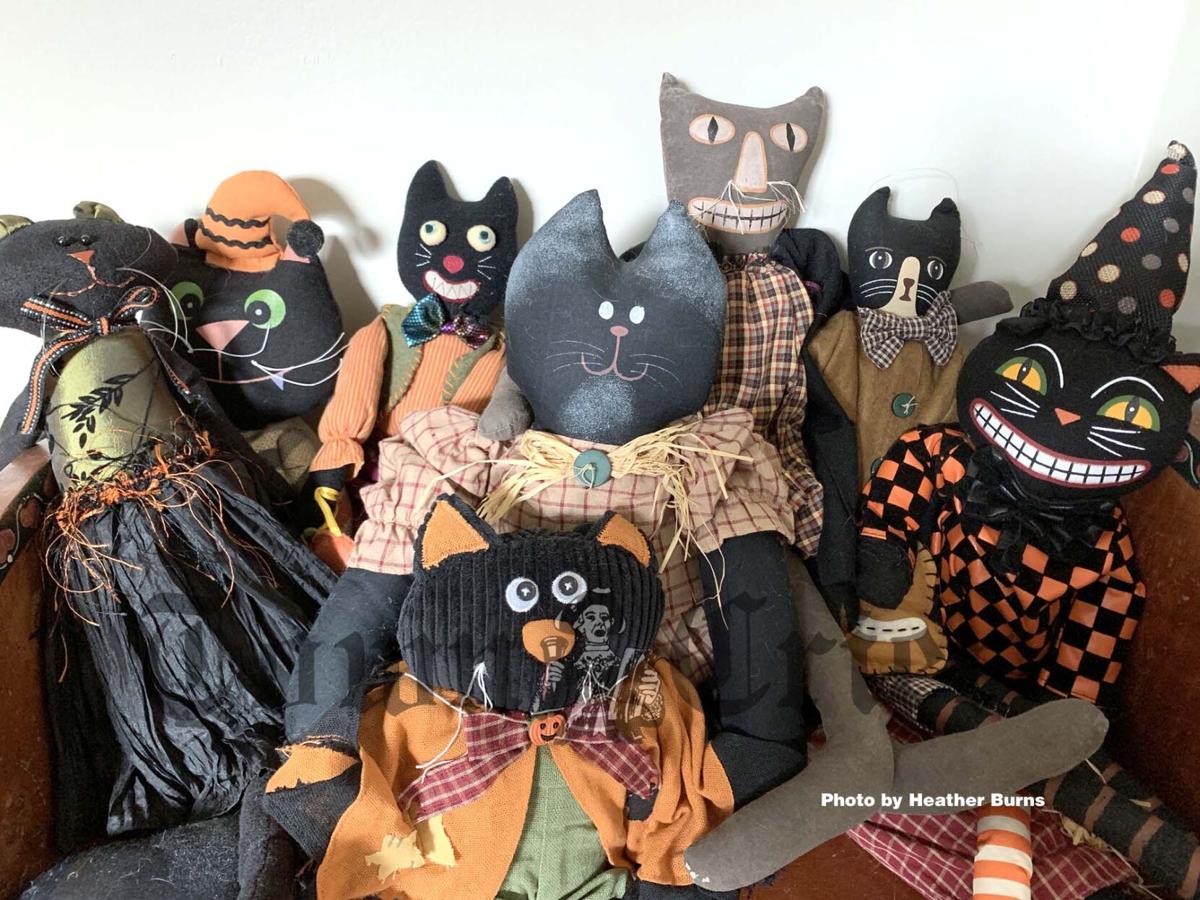 The silhouette of an arch­ed, black cat against a full harvest moon needs no ex­planation.

The black cat has long been a favorite symbol of Hallow­een, topping the charts as one of the three most popular Halloween costumes of all time.

The image of black cats is also a staple in Halloween decor, and is portrayed in every manner from vintage stuffed dolls, lanterns, and figures, to paper cut outs, party plates and napkins. Even festive Halloween lawn displays would not be complete without a 10 foot, blow up black cat to greet holiday trick or treaters.

So how does a domestic pet like the black cat become syn­onymous with other more terrifying Halloween symbols like witches, ghosts, were­wolves and monsters?

Anyone who has owned and loved a black cat may have a hard time relating to this majestic, beautiful crea­ture in the same category as other traditionally scary Halloween creatures.

This bad reputation was most likely based on the color of their fur, as the color black was often associated with evil, Satan, and witchcraft. The cat’s somewhat aloof personality may also have contributed to the notion of evil intent.

The historical reference of black cats as an evil sidekick to Satan or sorcery can be found as far back as ancient Greek mythology, with the story of Hecate. She was the Greek Goddess of witchcraft, ghosts, death and the moon, and had an assistant who was a black cat.

For centuries, Scottish folklore spoke of a black cat creature named Sith, who was thought to steal the souls from the dead in order to take on human form as a witch.

In 1232, Catholic Pope Greg­ory IX denounced the black cat, fearing it was an incarnation of Satan. Because this statement came directly from the church, it held great influence over Europe, continuing the unfounded fear of black cats for generations.

The fear of black cats made its way to the Ply­mouth Colony with the ar­rival of the Pilgrims. The Puritan Pilgrims distrusted anything associated with witches and black magic, including black cats, and anyone caught with a black cat would be punished or killed.

At the height of this un­founded paranoia against black cats and witchcraft, black cats were ritually kil­led in order to protect the community from their so-called evil ways.

During the witch-fearing histeria of the Salem Witch Trials of 1692, black cats were thought to assist witches in carrying out their evil deeds, thus sealing their connection to witches and witchcraft.

As the strong influence of the Puritan religion eased throughout the growing Uni­ted States, the fear of the evil of black cats changed to more of a superstition that black cats were bad luck. Many believed that if a black cat crossed your path, it was an omen for misfortune.

Today we now know that the opposite may actually be true, as there is scientific research to back up a positive relationship between humans and the black cat.

Most solid-black cats are actually the popular and be­loved, striped Tabby cat, but they have a recessive gene that suppresses the Tab­by pattern.

Researchers at the Na­tion­al Institute of Health have discovered that the genetic change that causes cats to have a black coat may offer protection from certain diseases, affecting the same genes that offer HIV resistance to humans.

Since cats experience many of the same health is­sues as humans, including cancer, HIV, and Alz­heim­er’s, they are a good model to study in fighting these diseases in humans. By studying how the cat’s genes evolved to resist certain illnesses, researchers hope to learn how to prevent these illnesses in humans.

Even though the black cat has the same character traits of the popular, striped Tabby, the black cat is up to 70 percent less likely to be adopted out of a shelter.

This is most likely due to “judging a book by its cover” or rather, judging a cat by its fur, but many don’t realize, as black cats age, their dark coat can change.

Sunlight can break down the pigments in their fur causing their coat to turn a rusty brown, or reveal their underlying tabby stripes.

There are also several advantages to adopting a black cat. Besides the fact that they are generally thought to have an advantage in battling certain feline diseases, they statistically tend to live longer than other cat breeds.

As any fashionista will tell you, black goes with everything! But, seriously, black cat hair shows up much less on furniture and clothing than lighter colored fur, and black cats need less grooming.

You will be in good company if you own a black cat, as Fred Astaire, Winston Churchill, Ernest Heming­way, and Queen Victoria all had black cats as pets.

Perhaps the most important reason to adopt a black cat is because you will know that you are giving a loving animal a second chance that they otherwise might not get.

In recent years the black cat has received a new and improved image thanks to the magic of Hollywood. Black cats have been featured as smart, helpful, wisecracking sidekicks, ra­ther than evil henchmen, in such movies as “Escape from Witch Mountain” and “Hocus Pocus.” Popular TV shows like “Sabrina the Teenage Witch” and the long running cartoon, “The Simp­sons,” also feature a regular “black cat” character that is kind, charming, and funny.

Although the black cat continues to be associated with the Halloween witch, it has progressed into a cuter, more friendly version of its former self, emphasizing the fun and playful side of the Halloween season.

This Halloween, celebrate all that is magical and wondrous about the iconic black cat, and leave the spooky folklore for the “professional” Halloween terrors, like Dracula and Frank­enstein.