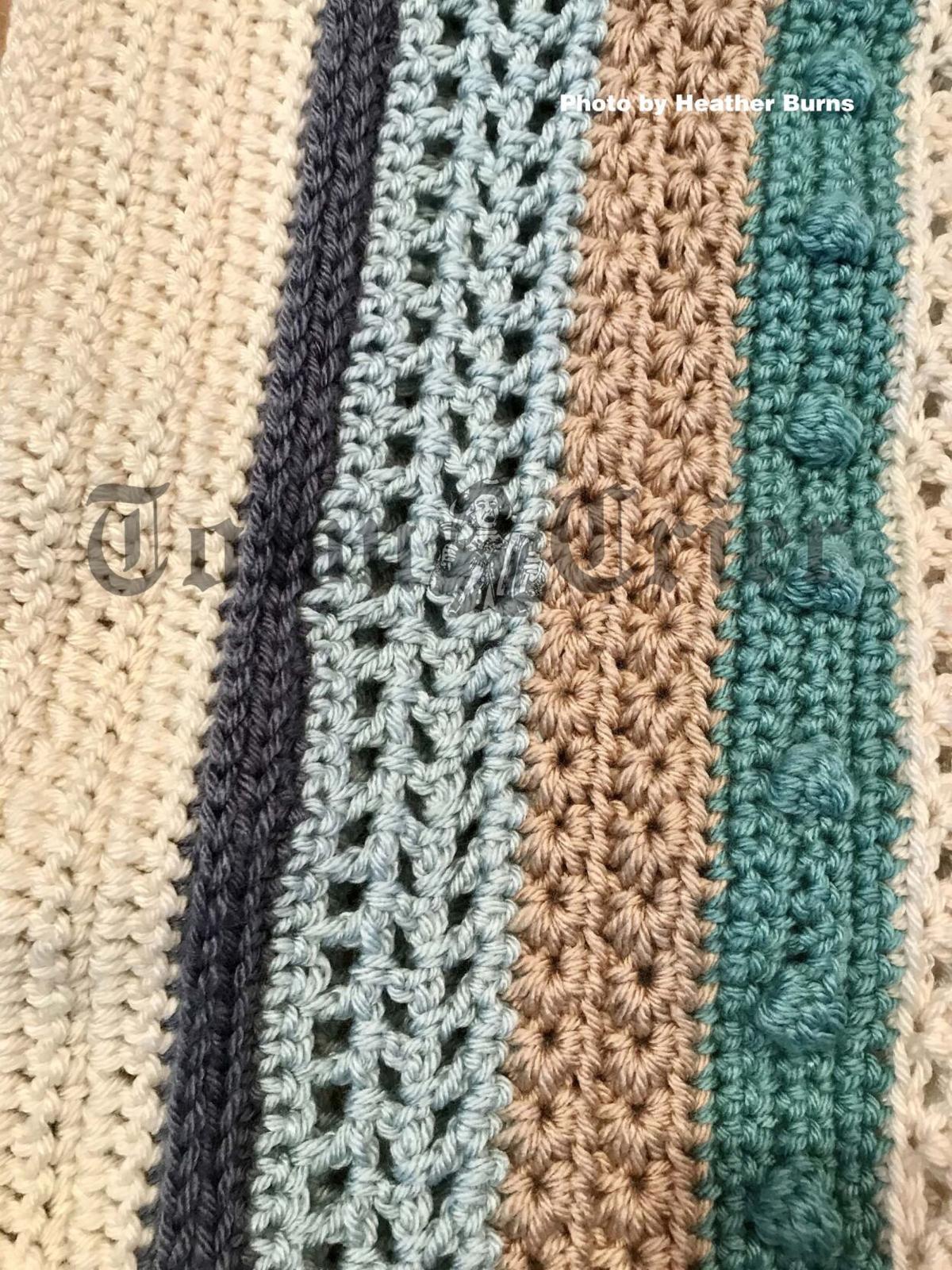 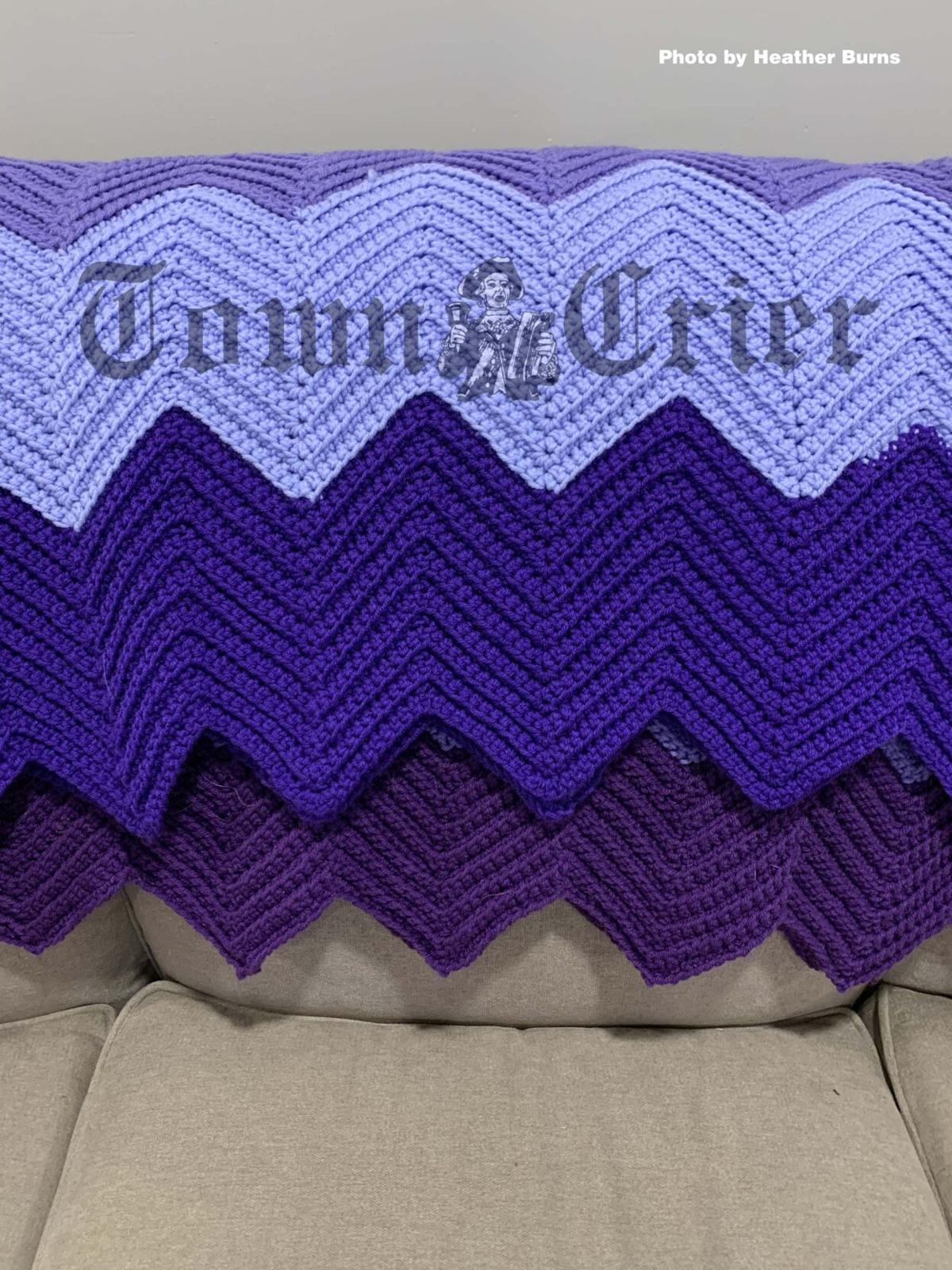 Growing up in the 1970s and 80s, it seemed like ev­ery­one had one of grandma's cro­chet afghans resting on the back of their living room couch. This hand crafted item was such a staple in homes across America, it was prominently featured every week on the set of the TV show, Roseanne, and dec­ades later, it remains on the set of the revised Rose­anne spin off show, The Connors.

Grandma’s love and craftsmanship created a crochet blanket to keep everyone warm and safe in the cold winter months.

Often considered the handwork for the “working class,” crochet work has been an important part of family life for centuries.

Other forms of handwork such as knitting, embroidery and weaving can be specifically dated back in time, but the be­ginnings of crochet work still remains somewhat of a mystery.

It is believed by some that crocheting was developed by descendants of the Guianna Indians in the 16th century, and was re­ferred to as “chain lace.”

Still others claim it can be traced back to Arabia, and was spread westward to Spain following the Arab trade routes.

It is also rumored that Italian nuns of the 1500s created crochet church textiles known as “Nun’s Lace.”

Unfortunately, even though there are examples of crochet from many different parts of the world over a large time frame, very little of the art of crochet was documented be­fore the 1800s when it be­came popular in Europe.

Research suggests that crochet handwork is actually descendant from the ancient form of embroidery known as Tambour­ing.

Tambouring originated in China and was practiced throughout Turkey, India, Persia and North Africa. This technique is achieved by stretching out fabric on a frame, similar in look to a drum. (Hence the name Tabouring after the French word Tambur meaning drum.)

The embroidery pattern was created with the use of a hooked needle to create a chain like stitch.

By the end of the 18th century, Tambour evolved into what was known as “crochet in the air” as the fabric drum was no longer used and the stitch was worked on its own.

Crochet soon became popular throughout France and Europe with the help of Mlle. Riego de la Bran­chardier. Because of her ability to convert needle and bobbin lace designs into crochet patterns, it became easy to copy and duplicate many different designs. Mlle. Riego patterns are also thought to have invented the lace like style of crochet now known as Irish Crochet.

Irish Crochet was born from the mother of necessity during the Great Po­tato Famine of 1845. It look­ed similar to fine Irish Lace, but was easier and less expensive to make and sell.

During this time in Ire­land, schools were formed to teach the skill of crochet work, and then trained “teachers” were sent all over Ireland to spread the trade of crocheting in or­der to help families make earnings and survive.

Irish Crochet was sold abroad to buyers oblivious to the fact that the beautifully crafted collars and cuffs they would fashionably wear had been created under poverty stricken conditions.

Throughout the centur­ies, the uses for crochet work was constantly chan­ging.

Later, crochet was used for personal decoration at special occasions like religious rites, marriages and funerals.

In Europe during the 16th and 17th centuries, the wealthy wore lace trim­med gowns, jackets and headpieces. Crochet work became the “poor man's lace” of that time period, and was a staple in everyday fashion.

Victorian time brought back a more utilitarian purpose for crochet work. Crochet patterns were available for such uses as bird cage covers, lamp mats and shades, chair back protectors and tablecloths, while also continuing in fashion as purses, caps, and waistcoats.

By the early 1900s, many of what we now think of as “traditional” crochet pie­ces were created, such as afghans, sofa pillows, pot holders, and teapot cozies.

In the 1960s, crochet work became a freeform means of expression with unlimited uses, and the same can be said of crochet work of today.

Patterns for everything from Christmas decorations to clothing to afghans are readily available at craft stores and online, and what better way to pass a long, cold winter’s day than a fun crocheting project.

If grandma did not pass down her crochet knowledge, or if you have forgotten how to crochet, there are plenty of accessible crocheting instructions you can follow.

Moss Brook Fiber Arts offer crochet classes for all skill levels at the Chelmsford Center for the Arts, located at 1A North road in Chelmsford.

However, due to COVID-19, they have very limited in person classes, but are offering virtual classes via Zoom and are trying to accommodate private lessons. For contact information and to see a schedule of upcoming events and classes, visit www.mossbrookfiberarts.com.

Another option is monthly online subscription for crocheting lessons.

Annie's Kit Club offers monthly subscriptions to master the art of crocheting, perfect for the beginning crocheter or to use as a refresher course.

Choose a subscription for the item you want to create, then choose a color pallet. You will receive all the yarn, tools and printed instructions you will need for that month’s lesson shipped to your home. Subscription also provides access to easy to follow instructional online videos that can be viewed unlimitedly with the ability to pause and reverse, and replay while viewing. For a list of available crochet projects visit www.annieskitclub.com.

If you are comfortable navigating in the online world of Youtube, there are many free instructional videos available to get you started in the art of crochet.

Winter of 2021 may seem particularly long and cold for many as we continue to isolate because of the ongoing pandemic. Taking part in a virtual or online class in the art of crochet work can open up a new world of crafting that is not only fun, but useful and fashionable. After all, a new pair of mittens can make quite a fashion statement, just ask Bernie Sanders.