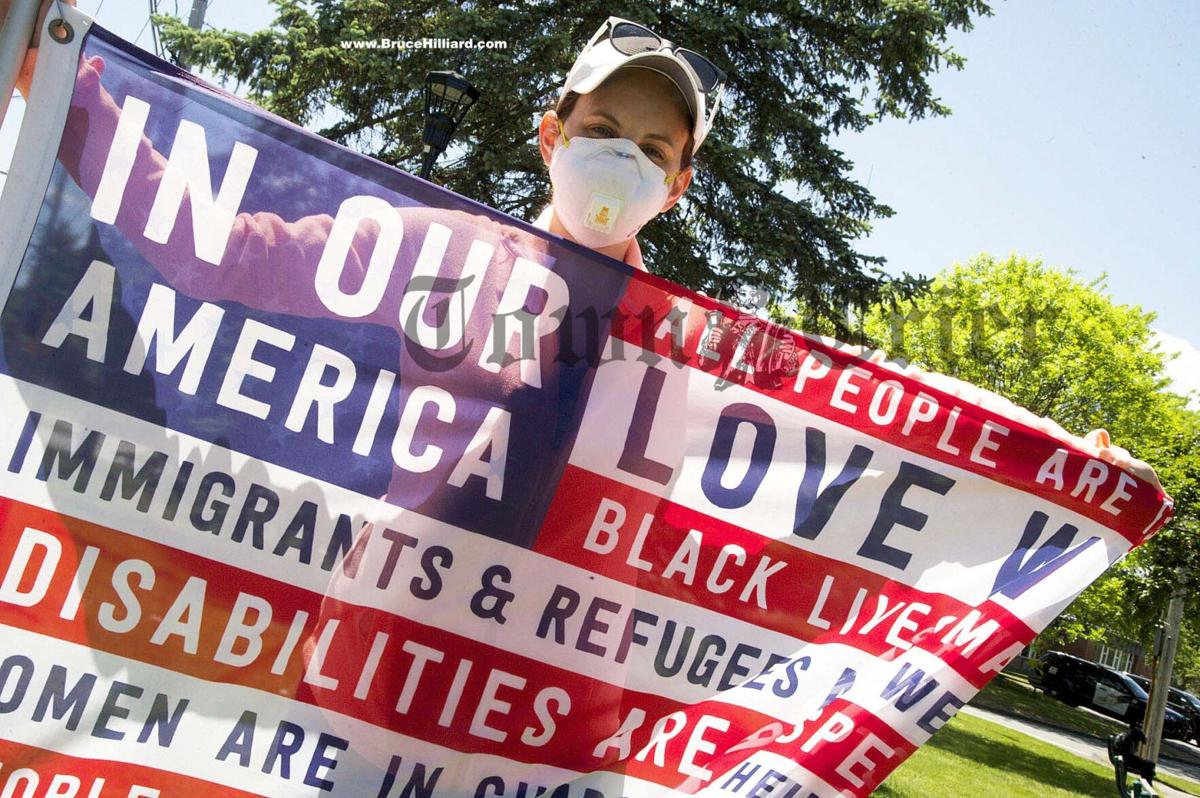 Peaceful protest on the Tewksbury Common. Kristyn Iovanni-Shawghnessy keeps this flag on her front lawn. Now on the common with the message Black Lives Matter. (photo: BruceHilliard.com) 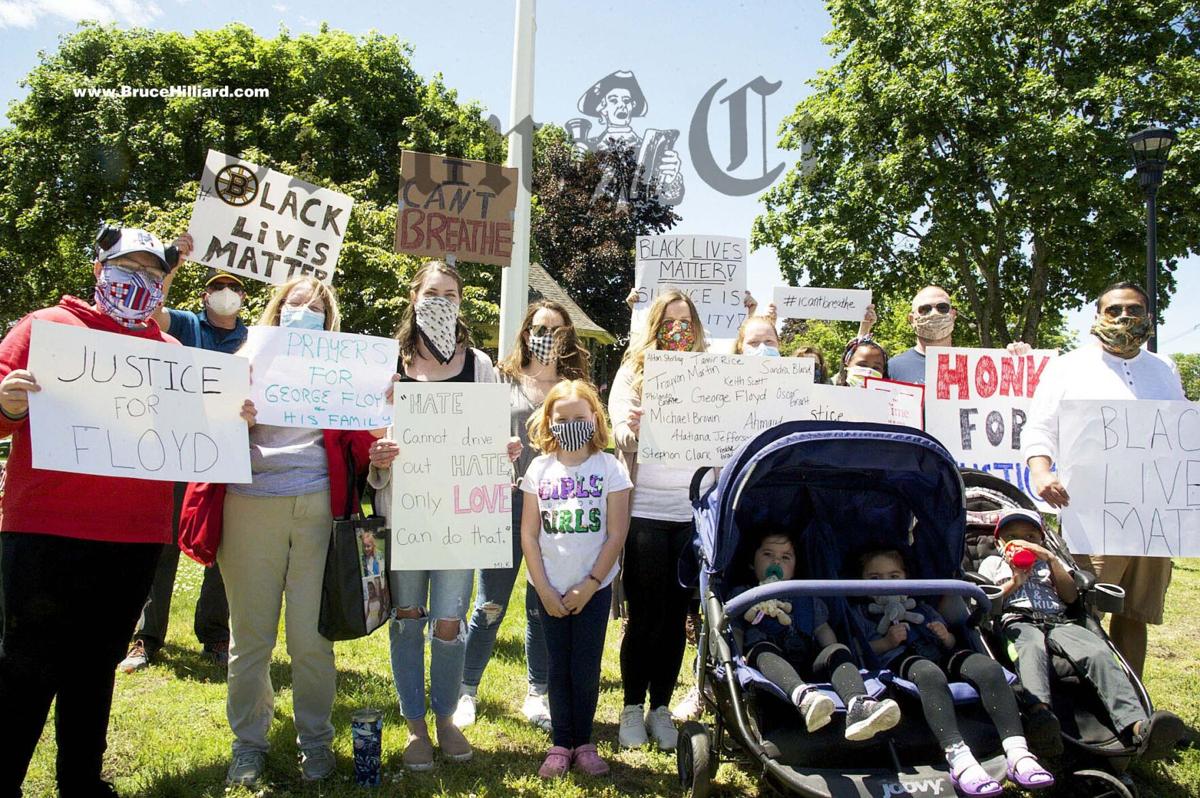 Peaceful protest on the Tewksbury Common. Kristyn Iovanni-Shawghnessy keeps this flag on her front lawn. Now on the common with the message Black Lives Matter. (photo: BruceHilliard.com)

TEWKSBURY — Over the past several days, the news cycle has been dominated by coverage of massive peaceful pro­tests in cities and towns across the United States in response to the deaths of Ahmaud Arbery in Geor­gia, Breonna Taylor in Louisville, and George Floyd in Minneapolis, as well as countless other instances of racial injustice and police brutality in our country’s past and modern history.

Hundreds of thousands of Americans are taking to the streets to push for criminal justice reform and police accountability. In Tewksbury, resident Anne Seichter knew she had to do something.

“I felt helpless,” she said, amid the pattern of deaths, and decided to organize an event “to show Minne­apolis and everyone that we support black lives — they deserve to be here and walk around without fear for their lives.”

Seichter used Facebook to organize a three-hour peaceful Black Lives Mat­ter protest on Tewksbury Town Common on Sun­day, May 31. She reached out to the town and interim police chief John Voto to ensure the protest could be held safely.

On the day of the event, the empty common quick­ly became occupied, with more than 60 residents participating. Protesters wore masks and spread out at a social distance on the grass along Route 38 and Pleasant Street. Mem­bers of every age group participated, from young children in strollers to senior citizens. While ma­ny of the attendees were white, black, Hispanic, and Asian residents also participated.

Seichter wanted to be clear: “This is not an anti-police or anti-white movement. This is only saying that we want black Americans to feel safe in this country.”

The sentiment was echo­ed by many participants, along with a desire to fix the broken systems.

“Enough is enough,” one resident said. “If white people don’t do something, it’s just going to keep happening. Every­body needs to have a voice.”

Others at the event were simply in shock at the magnitude and de­tails of recent deaths, saying it was “unbelievable” and “impossible to process.”

Some protesters wore shirts that said “respect existence or expect re­sistance.” Others carried signs that said “stop the hate,” “brutality is not nor­mality,” “#icantbreathe,” and “injustice anywhere is a threat to justice everywhere,” a quote from Dr. Martin Luther King, Jr.

Reactions to the event were largely positive. People in passing cars shouted their support, clapped, cheered, raised fists, and “honk[ed] for justice,” as a sign read.

A police cruiser drove by honking enthusiastically. Only a few drivers booed or shouted expletives as they passed. Pro­testers remained peaceful.

A large group of high school students showed up dressed in black, carrying signs that read “remember their names” and “Black Lives Mat­ter.”

“It’s our duty to use the voices that we have to speak for people who are being actively silenced,” one student said.

Another woman held up a large flag with phrases stating “Love Wins” and “Black Lives Matter.” The woman, who declin­ed to be identified, be­lieves that the focus of larger protests is not about looting, but about people wanting to be heard.

“People have a right to be angry,” she said, ad­ding that in recent years, protesting — peaceful or otherwise — has been met with backlash. “It seems like no sort of protesting is OK.”

She added that even though Massachusetts is largely liberal and white, citizens cannot become complacent and say “‘it’s not a problem here’... if it’s a problem in the Uni­ted States, it’s a problem for all of us.”

She said that she was “sad it took me this long to protest... it’s gonna take white citizens getting angry” to fix the problem.

Resident Mirlyne Eloi has lived in Tewksbury for 14 years and came out to support the cause.

“I’m proud to be part of this community,” she said. “I was surprised to see they organized a peaceful protest. It’s a small town... it speaks volumes.”

Tewksbury’s state representative Tram Nguyen (D-18th Essex) attended the protest. She said that the emphasis is not about people versus police.

“Law enforcement’s re­sponsibility is to serve and protect, which they can do better if they have the trust of the people. It’s good to see people out,” she said, adding that citizens and lawmakers need to call out bad behavior to keep in­tegrity in the system, especially during the COVID-19 pandemic.

“We’re at a boiling point,” she said. “People are step­ping up and speaking out. There is a lack of recognition that black and brown people have been disproportionately impacted [by systemic racism] and may have been subject to unconscious bias.”

She also spoke about policy changes at the local, state, and national levels to address the public’s concerns: “It’s not a matter of ‘just one in­stance’ but a whole bigger picture of institutional racism. How do we make sure people have access to resources and criminal justice reform to make sure people aren’t being disenfranchised?”

Nguyen mentioned possibly standardizing body cameras for police officers as “protection for everyone” and making sure police are being held accountable to the communities they serve.

Five Tewksbury police officers were present for the entirety of the event. The officers wore standard uniforms — a far cry from the full riot gear worn in major cities; officers stood far back from the sidewalk near the ga­zebo.

Some protestors felt “a little weird” with the po­lice being there, though most had either neutral or positive attitudes.

“They’re not disturbing anything,” one resident said.

Another woman said that she was very happy the police were out, and noted they had been very respectful. Standing a few yards away from the students on Pleasant Street, she recounted an incident from moments earlier, when the driver of an SUV began shouting ex­pletives at the teenagers, calling them “pieces of s**t”; an officer swiftly moved closer to the students to make sure they were OK, and as a result, the vehicle drove away.

Seichter thanked the department for their support and presence. Lieu­tenant James Williams was the supervising officer for the event.

“It’s a great thing, a very positive event,” he said. “This is an incredible ex­pression of right to free speech. It’s just a shame it has to happen at all.”

Across the common, one woman waved at pas­sing cars with a bright red umbrella covered in the phrases “I can’t breathe” and “stop racism.”

She explained that when she graduated from high school, there were not many people of color in the area. Now, she sees that “so many people are insulated and don’t see what’s happening to people of color — racism is pervasive. People are blind or have been taught that if you are black, you are somehow ‘less than.’”

She works as a nurse and has many black Af­rican and Haitian colleagues, and has seen firsthand how financial disparities and racial pow­er imbalances persist — often implicitly — in the workplace.

“If we don’t speak up, we’re complicit,” she said. “Whether politically when we vote, or on the town common, or in the grocery store and the workplace. If one of the other [Minneapolis] police officers had said ‘stop,’ George Floyd would still be alive. White people need to de­mand change. Many white people don’t see it or un­derstand. We have to speak up for each other, because it isn’t fair that some people get all the justice, and some get no justice based on their skin color... It only matters what’s in your heart. Melanin doesn’t speak to character. It says a lot about the people who think it does.