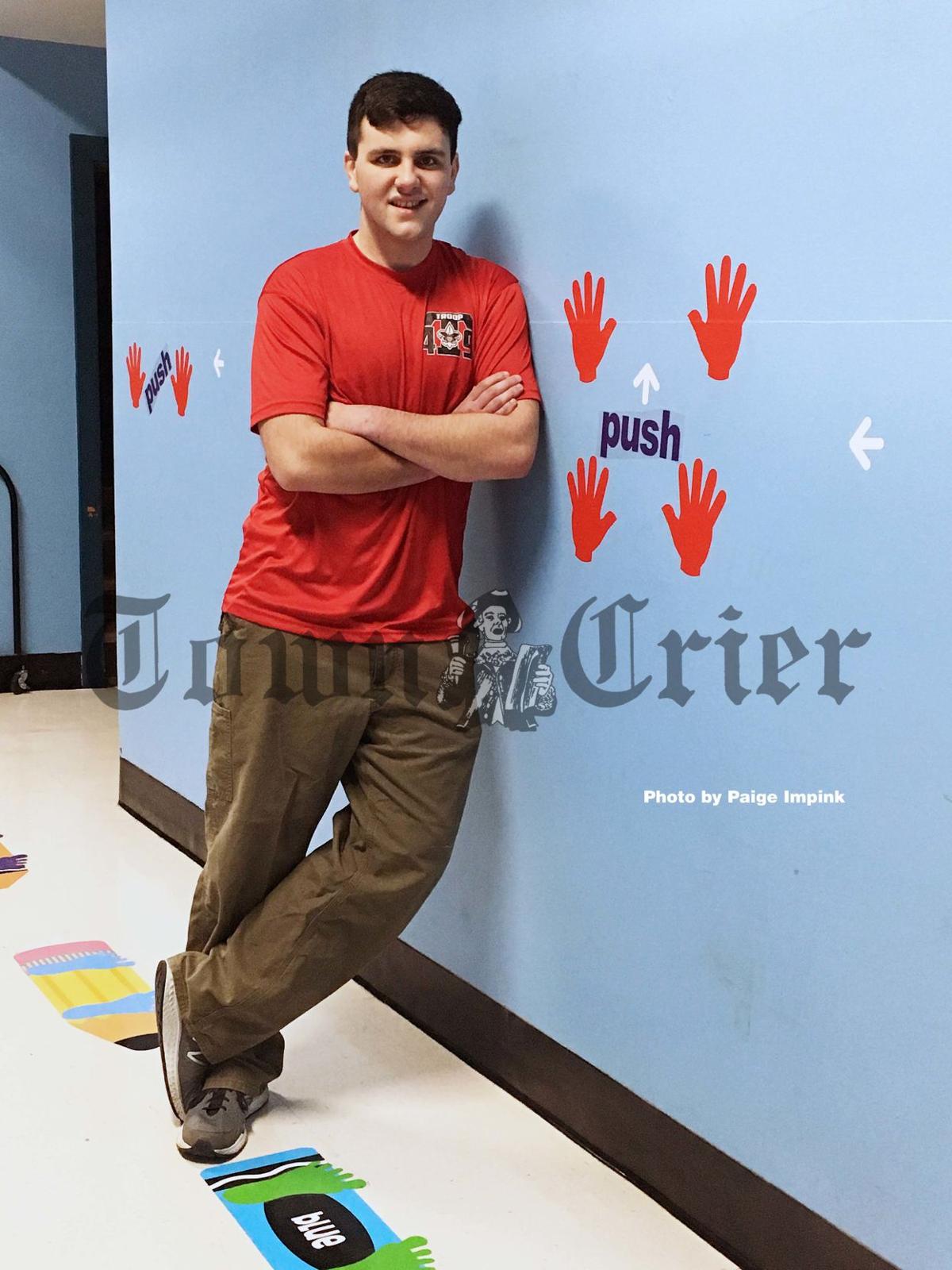 Bobby O’Hearn stands along one of the sensory paths he installed at the North Street School during winter break, part of his Eagle Scout project. The path will provide a brain-break for students, and help students enhance motor and spatial skills. (Paige Impink photo) 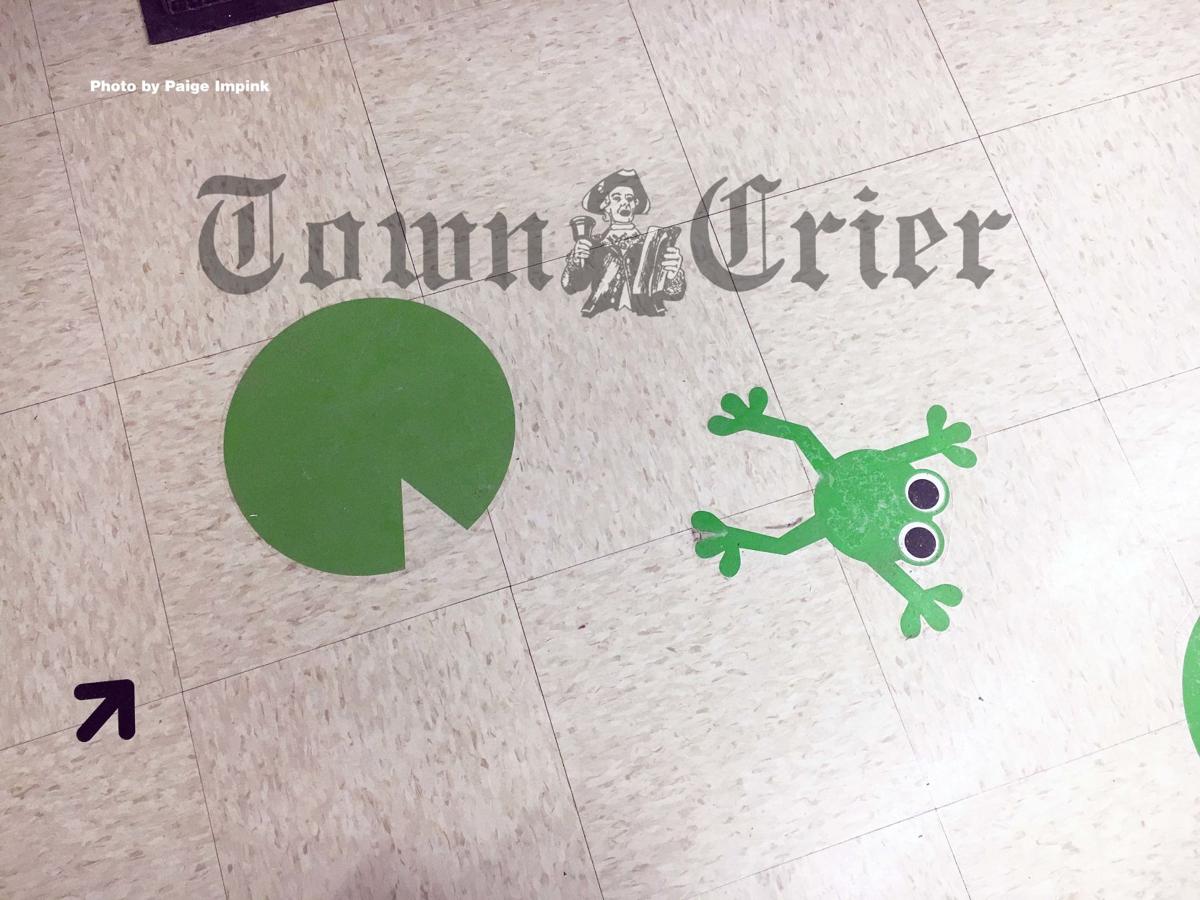 An example of the fun decals that are part of the sensory path at the North Street. Students follow the paths and execute a variety of movements to exercise eye-hand coordination and improve cognition. (Paige Impink photo)

Bobby O’Hearn stands along one of the sensory paths he installed at the North Street School during winter break, part of his Eagle Scout project. The path will provide a brain-break for students, and help students enhance motor and spatial skills. (Paige Impink photo)

An example of the fun decals that are part of the sensory path at the North Street. Students follow the paths and execute a variety of movements to exercise eye-hand coordination and improve cognition. (Paige Impink photo)

TEWKSBURY — Tewks­­bury resident and Shaw­sheen Tech senior Bobby O’Hearn has a “can do” attitude, and his Eagle Scout project, recently com­pleted at the North Street Elementary School, is a shining testament to that.

O’Hearn has been invol­ved in Boy Scouts for many years and when his original troop dissolved, he found another troop to work with.

He settled into Troop 49 in Tewksbury out of St. Wil­liams Church, led by Scout Master David Pen­ney. Part of that goal in­cluded achieving Eagle Scout status, the highest rank in the Boy Scouts of America. O’Hearn had earn­ed bad­ges over the years but some did not transfer when he decided it was time to pursue the Eagle Scout rank.

“He didn’t let that stop him,” said Richelle O’Hearn, Bobby’s mother, noting sev­eral obstacles on the way to completing his project.

To his credit, and keeping with his character, O’Hearn persevered. O’Hearn also cre­dits his time at Camp Sayre in Milton as a major force in helping achieve the credits toward his Eagles status.

The camp provides a fo­cus on completing prerequisites for Eagle bad­ges with strong guidance. Pa­rent involvement is also a key component of completing badges, said O’Hearn, as well as the support of his scout leaders.

To select his candidate project, O’Hearn had to follow specific guidelines. He reached out to the Tewks­bury Public Schools to see if there was something that could enhance the student experience. North Street Principal Ka­ren Cronin saw the op­portunity. Cronin had wan­ted a sensory path for the school, an indoor ac­tivity trail which gives students a fun way to shake off pressure during the day.

“The path is for everyone,” said Cronin. “Teach­­ers, specialists, special area teachers — anyone can send their student to ‘take a walk’ on one of the paths.  I think it can help every learner.”

The whole project took O’Hearn more than 27 hours to complete.

Sensory paths are popping up in schools across North America.

According to Cronin, “Throughout the day, students need to be able to take a brain-break, and sometimes motor activity is a natural solution.”

Experts agree students benefit from movement in their day. Some specialists in other districts use the paths as a preemptive way to manage behaviors. The path provides some purpose and interest, according to Cro­nin.

O’Hearn had to submit a proposal for his Eagle project and with the help of his friends Brooke Ger­ry and Jason Elias, in­stalled the path in two separate wings of the North Street during the winter break. O’Hearn, Elias and Gerry are also North Street alums. O’Hearn had planning meetings with the principal in preparation and said he was gi­ven “creative discretion” while also following guidelines for height and distance placement appropriate for the North Street third and fourth graders.

O’Hearn, a varsity hea­vyweight wrestler and varsity football left tackle, is planning a career as a plumber when he graduates.

“I wish we had these paths when I was in school,” he said.

The paths have colorful decals such as handprints, frogs, numbers, arrows and lily pads, and O’Hearn really appreciates their value to the students.

O’Hearn has also contributed to the North Street school with projects that don’t even count toward his badge, but still enhance the student experience, bringing him great pride. His contributions include a four square court and basketball court outside on the recess blacktop.

O’Hearn will submit his project and wait for his Eagle candidate review sometime in the spring.

Reflecting on the project, O’Hearn sums up his philosophy this way: “…just keep going — it is not about being the ‘smart­est, fastest, or strongest,’ but about striving ‘to do good in the world.’”