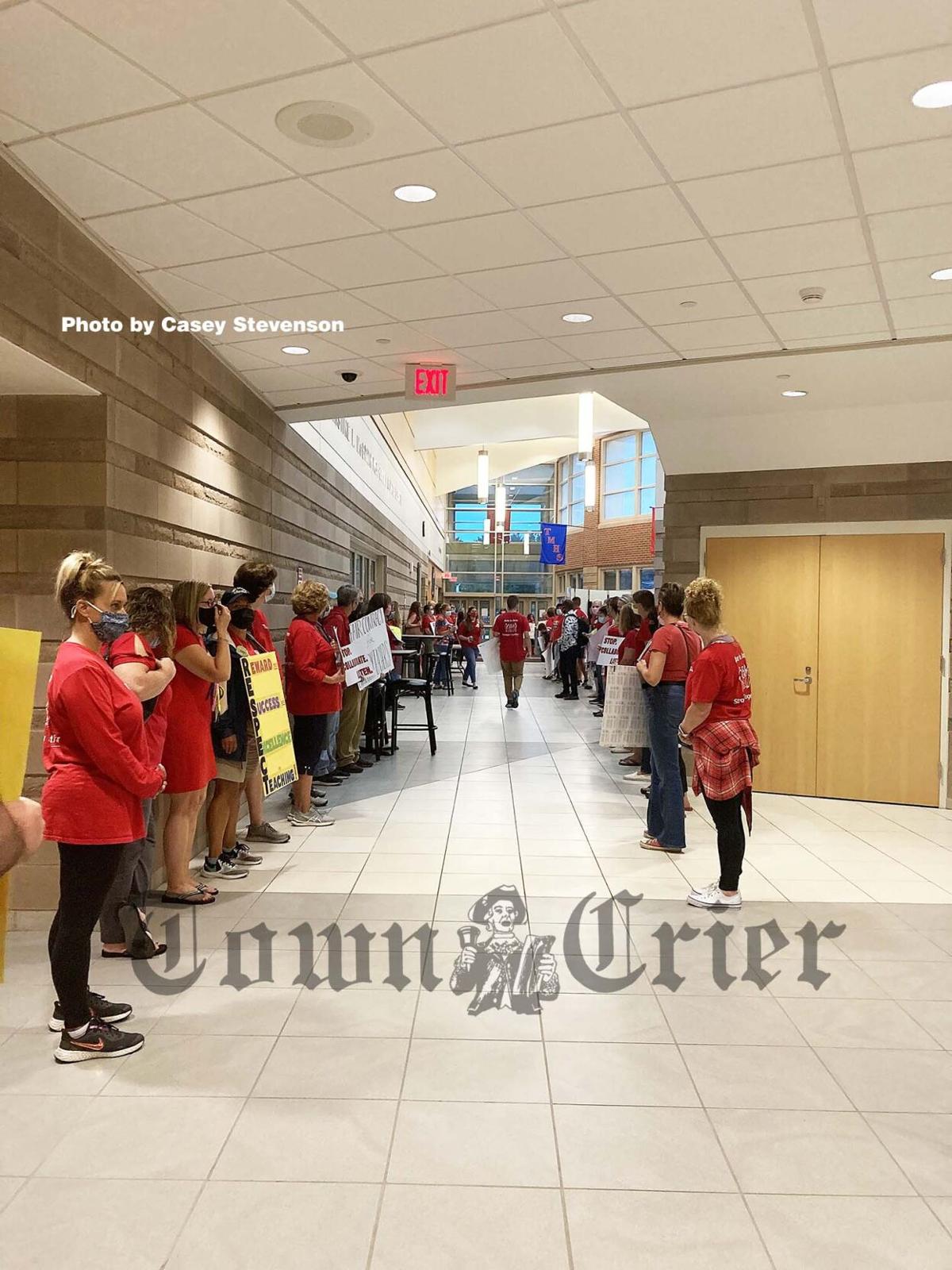 Tewksbury teachers and aides wait outside the auditorium prior to the most recent School Committee meeting to protest for a better contract. Their contract expired on Aug. 31. (Casey Stevenson photo)

Tewksbury teachers and aides attended the School Committee meeting on Sept. 22 to call for a contract to be finalized between the district and the Tewksbury Teachers Association. (Rosalyn Impink photo)

Tewksbury teachers and aides wait outside the auditorium prior to the most recent School Committee meeting to protest for a better contract. Their contract expired on Aug. 31. (Casey Stevenson photo)

Tewksbury teachers and aides attended the School Committee meeting on Sept. 22 to call for a contract to be finalized between the district and the Tewksbury Teachers Association. (Rosalyn Impink photo)

TEWKSBURY — On the evening of Wednesday, Sept. 22, a sea of red flooded the Tewksbury School Committee meeting. Teachers and aides from schools across the town gathered in the parking lot of Tewksbury Memorial High School and silently marched into the building. There, they waited in a line for the committee to arrive, and then gathered in the back of the auditorium and watched the meeting.

The demonstration was led by Tewksbury Union Association President and Tewksbury Memorial High School teacher Conner Bourgoin. Bourgoin is a be­loved teacher in the high school and among his union constituents.

The protest even had some guests among its ranks including Merrie Najimy, President of the Massachusetts Teachers Association, MTA Field Representative Jean Ven­ette, and MTA Organizer Kevin Tierney.

Bourgoin shared his feel­ings seeing so much red in the auditorium.

“It was rewarding, but not surprising. The amount of red in the crowd is indicative of how teachers and aides feel — that they deserve a fair contract and to be not only seen, but truly listened to. The teach­ers and aides you saw made sacrifices in their personal lives to be present that night to ensure the School Committee understands how strongly they feel about the current situation of our respective contracts.”

Their mission? To stand in solidarity in support of continuing contract negotiations. Negotiations have been ongoing between the union and the School Com­mittee since January, and their recent contract ex­pired in August, so these educators have gone without a contract since Aug. 31.

Unfortunately, due to the ongoing negotiations, the terms and conditions that the union is fighting for is unclear.

“Unfortunately,” Bour­goin said, “because of our agreed-to ground rules, I am not at liberty to share those details at this time with the public; however, at this time, I can say that I speak for the whole Tewksbury Teachers Asso­ciation when I say that I hope the Tewksbury School Committee, the superintendent, and the assistant superintendent stay at the bargaining table, and do not request any alternatives, such as mediation, in completing this Collective Bargaining Agreement for the Tewksbury teachers and aides.”

These teachers had home­made signs, some reading, “About 355 of my friends and I could use a contract,” “Bargaining is a Two Way Street,” and “the future of education is all of us.”

As the School Committee meeting progressed, the educators showed respect and applauded the speakers.

When it came time for public comment, Bourgoin stepped up to the microphone. He was met with thunderous applause and cheers from his consti­tu­ents. His message was simple and clear.

“We come into work day in and day out to support these students because we care about them. But we are frustrated at the lack of contract and we ask that you please compromise with us. This issue is of ut­most importance, not just to teachers, but to students, as well. We need contracts for both teachers and aides.”

Bourgoin shared what was running through his mind as he spoke.

“I felt empowered by the high number of teachers and aides who were standing behind me cheering me on. I knew I had to de­liver a simple, direct message to the Tewksbury School Com­mittee: enough with the hesitation, let's bargain a contract that respects all the work that teachers and aides are doing, day in and day out — especially during the height of the CO­VID-19 pandemic last year!”

And with those words, he rallied the troops and led them out of the meeting with the smiles and cheer that Tewksbury educators demonstrate each and every day.

Bourgoin was pleased with the outcome, saying, “The action, I feel, was powerful. I think the School Committee realized that it takes a big deal for so many teachers and aides to come back to Tewksbury to show up to this meeting at 6:15 p.m., hours after school — the membership is en­gaged, concerned, and de­manding a fair contract. It's not just the respective two bargaining teams, it's the entire membership.”

In terms of what is next for the Teacher’s Union, Bour­goin stated, “At this time, the Tewksbury teachers and aides will continue to showcase solidarity for a fair contract. I will not share such plans as now, but I want it to be known that a lot of methodical planning and conversation has been had.

“As the time passes day-by-day, it becomes more clear: teachers and aides need a fair contract that respects the work they are doing for the children of Tewksbury.”

And his advice for educators is as follows:

“My advice for any educator who is facing such issues is this: teachers and aides are the two frontlines for the children of their respective district. Teachers and aides are the ones who care for, lose sleep at night over, and continually strive to contribute to the children of said district. While that is the most important reason we are all in this profession — to educate kids — we must protect our working conditions. If we do not, we are demoralized, overworked, and unhappy.

“We are also stressed for the wrong reasons, which then reflect on the kids of said district. Do not forget the importance of advocating for such rights — it does not just benefit teachers and aides — it benefits the kids. Adding to that, frankly, I am certain that the teachers and aides of Tewksbury are the two groups that think about these children, in totality, the most.”

While the protest may have concluded, the fight for a fair contract is far from over for Conner Bour­goin and the teacher’s union, and as Wednesday’s demonstration proved, there is power in numbers and anything is possible when a community comes together in solidarity.