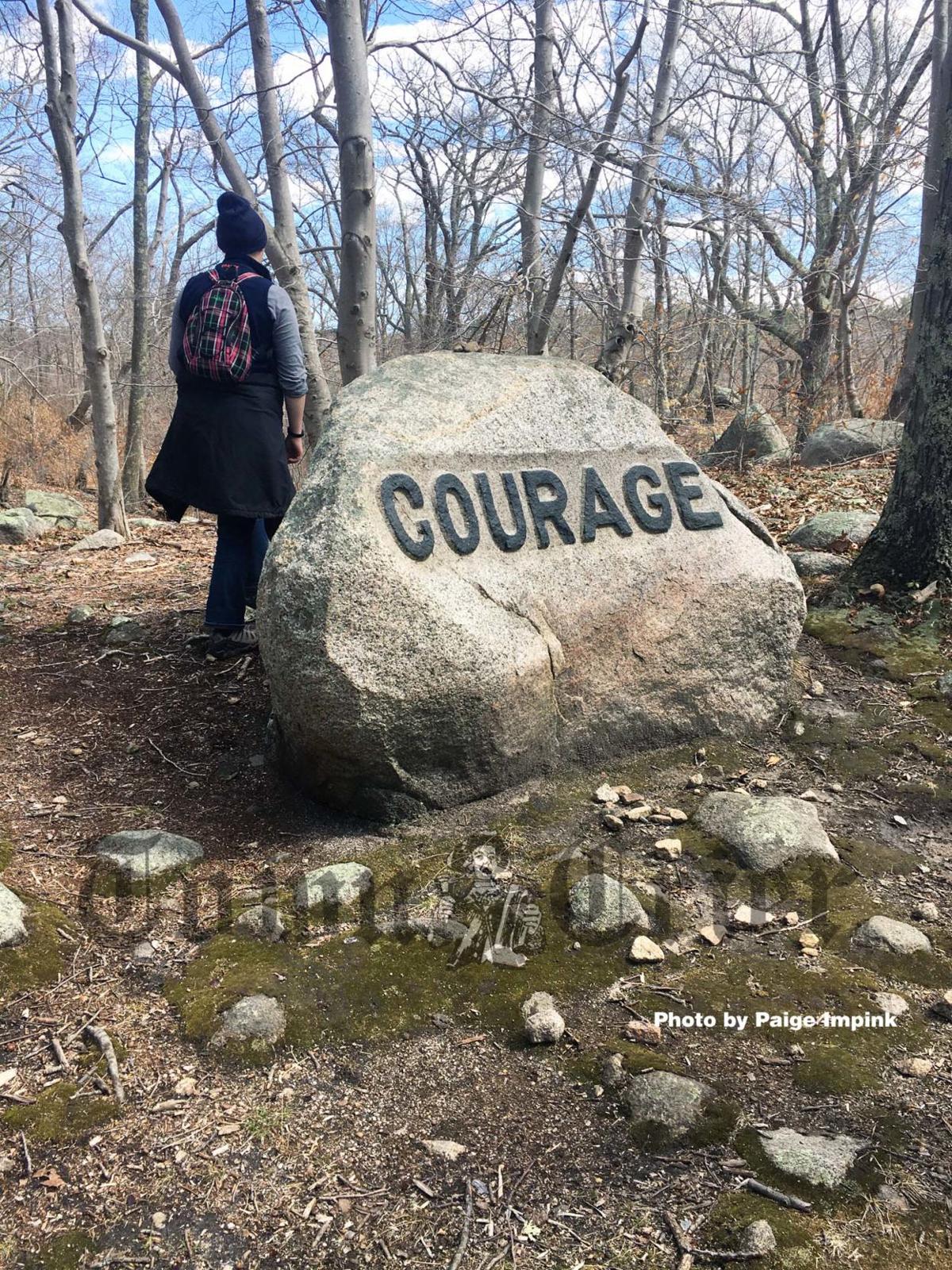 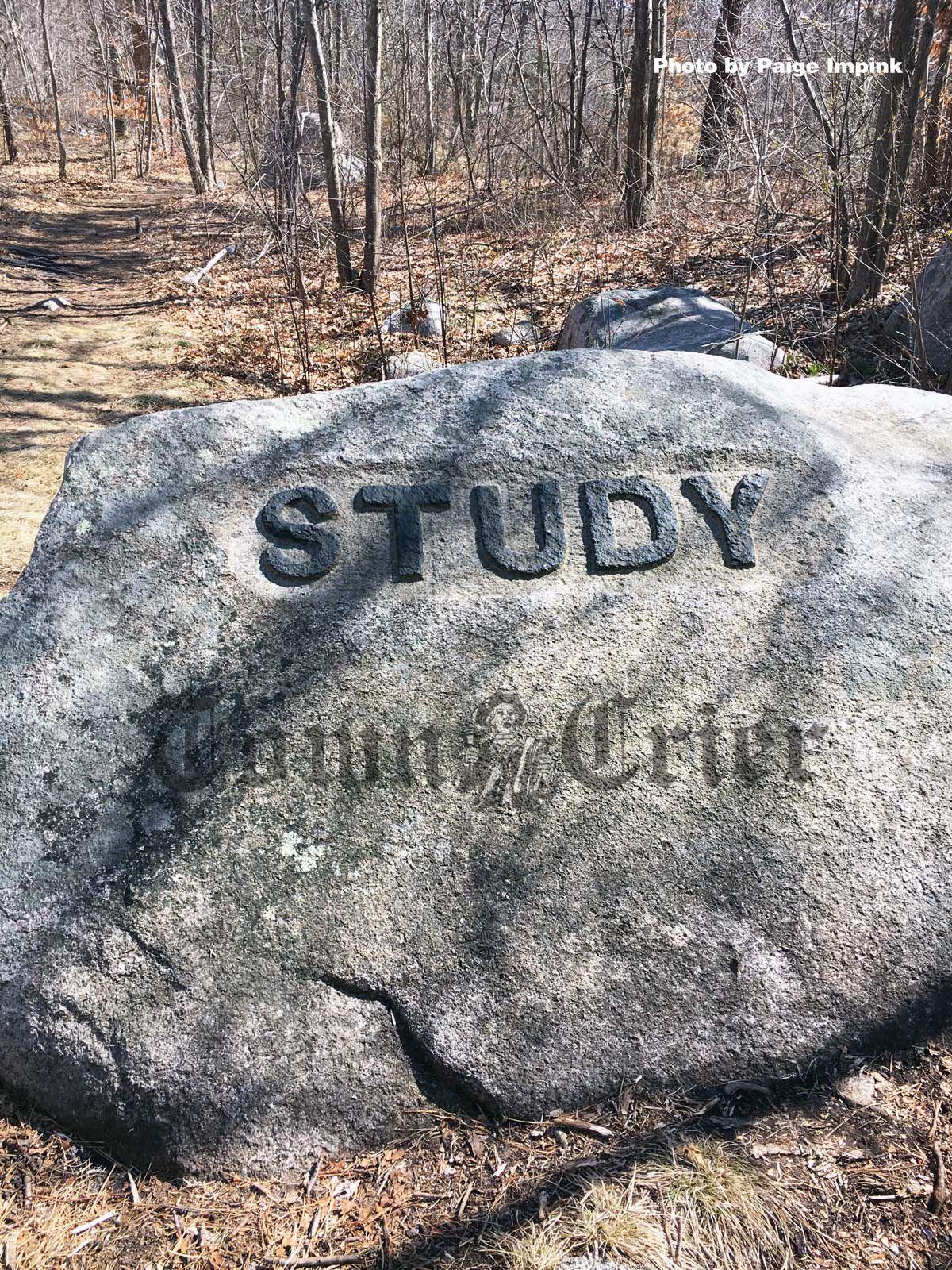 Hiking through the forest of Dogtown Woods, mes­sages reveal themselves on boulders encouraging “Keep Out of Debt” and “Use Your Head.”

Is it whimsy, haunting, or a message from another time? One can’t help but wonder about the stone carvers who spent hours creating them, and the man who employed them to help the economy.

On a recent weekend we drove to Rockport and hi­ked from the Babson Mu­seum, named for Roger Babson, the founder of Babson College. The 1,150 acre property was purchased by Babson in 1927 and crosses into Glouces­ter, with remnants of a booming quarry industry from an era gone by.

The Babson cooperage building, dating from 1658, is considered to be the oldest building on Cape Ann.

As we walked along the path, we saw stone walls, quarry pits, woodlands and wetlands…. and the commuter rail. Construction of the railroad into Rockport was specifically for transportation of the giant granite blocks quarried here in the early 1800s.

Babson, an author, in­ves­tor, and businessman, had gained notoriety as a predictor of the stock mar­ket collapse and the subsequent Great Depression through his financial forecasting models. He went on to establish three colleges, several businesses, the Gravity Institute, and even ran for president in 1940.

Babson wanted to help the unemployed stonecutters, so he commissioned them to carve inspirational words and phrases on boulders on the property — 36 in all. Along the Babson Boulder trail we found “Initiative,” “Cour­age” and “Study” — phra­ses that hint at Babson’s deep Episcopal roots.

The woods themselves are known as Dogtown Common, and span what was a colonial settlement dating back as far as the 1600s. Historians are not sure how the area got its name, but the settlement, well inland, declined once the Gloucester fishing boom was underway after the Revolutionary War.

It is speculated that the settlement was too far away from the action and development of the waterfront and eventually be­came a place for the im­poverished. The last house was torn down in the mid-1800s though at its peak more than 100 houses were thought to have been there.

During the depression, Babson used the out of work stonecutters to identify and mark the sites of the old settlement houses with numbers on boulders as well. The protected space has expanded as part of the Essex heritage area to almost 3,600 acres now.

At the time, the land was open as pasture land so the boulders stood out. Today, many of them are hidden amongst the trees, but provide a charming surprise when found.

The area may also be accessed from Cherry Street in Gloucester if par­king is scarce. We hiked over seven miles of trails, and even came upon the Whale’s Jaw, two massive boulders that look like an open whale’s mouth. We found carvings on the glacial erratic dating from 1921, another homage to the stonecutting of the era.

While the trails are fairly wide and distinct, there are places where it can become confusing, so print a map before heading out. Do not rely on cell phone service to guide you through the area, as it can be spotty.

Hiking footwear is recommended as the trail was muddy in spots, and there is some brush overgrowth in places so long sleeves and pants would be in order.

Give Dogtown Woods a try and see how many of the boulders you can find.